Back to Stories
Young Writers

A City Kid Awakens To The Value Of Wild Life Conservation

Gabe Castro-Root came to Greater Yellowstone on vacation from San Francisco. After visiting, he saw journalism as a way to defend it. Tom Sadler interviews the young student about his plans 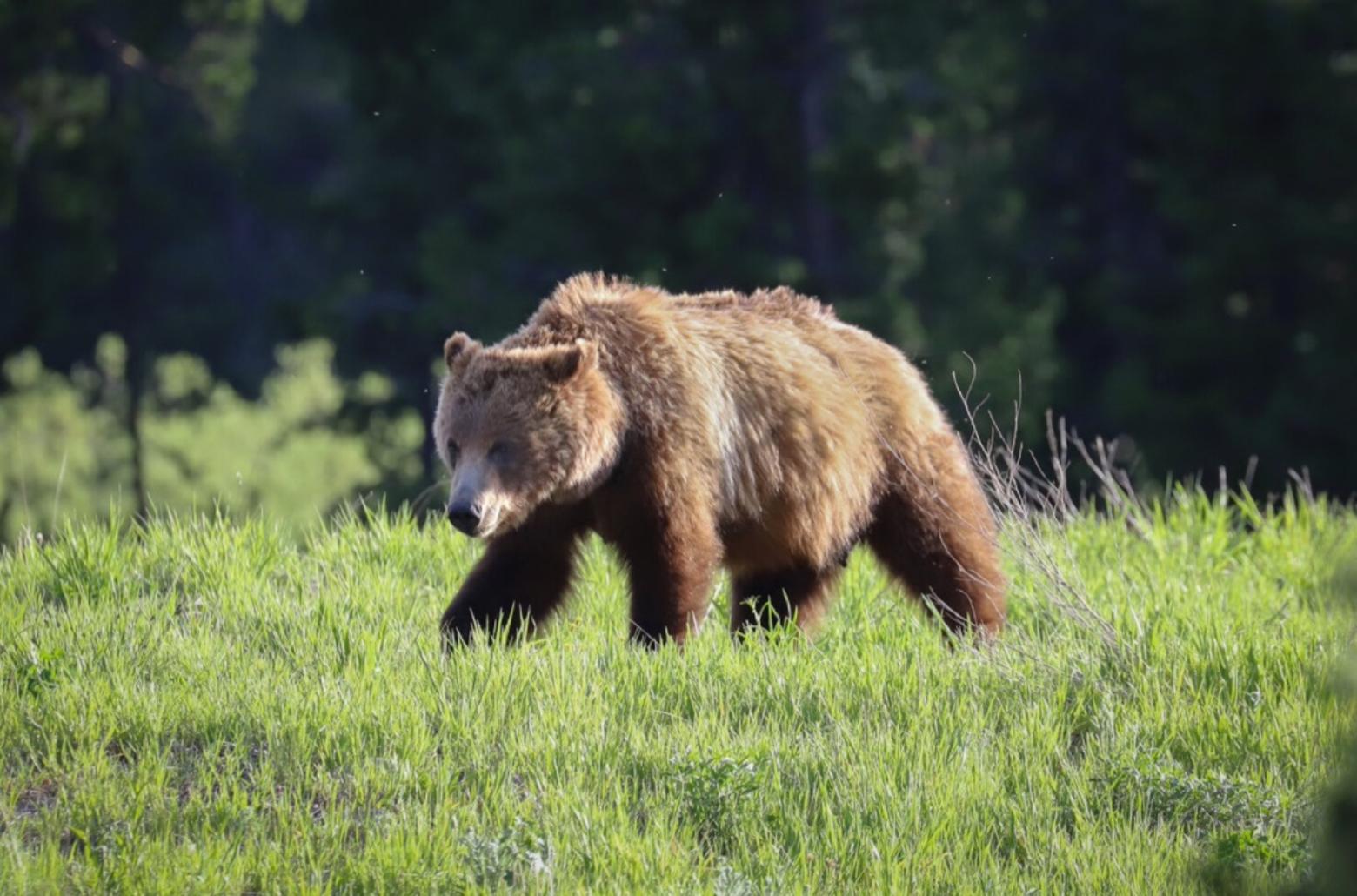 Greater Yellowstone emanates a rarefied sense of wildness so rare in the human-dominated US. Castro-Root captured this photo of famous Jackson Hole Grizzly 399. Animals like her put into context what's at stake and why facts in reporting about nature matter.
Interview by Tom Sadler
Photos by Gabe Castro-Root
One of the rewards I receive of writing for Mountain Journal is hearing from readers. Gabe Castro-Root, an incoming freshman at American University in Washington, D.C., wrote to Todd Wilkinson and me to let us know that a recent trip to Yellowstone and Grand Teton national parks inspired him to learn more about the region's ecosystem—and become a scribe to defend it.
While MoJo as a 21st-century journalism medium has reached millions in its first four years, I value its belief that each and every individual reader matters—that every person who cares about the Greater Yellowstone Ecosystem can be the start of a positive ripple effect
Mr. Castro-Root wrote, “Coming from San Francisco, I haven’t had much experience with truly natural places outside of my two visits to Wyoming and Montana. I plan on studying journalism in college and, in part because of my time in Yellowstone, I hope to become a climate and environment reporter one day. Mountain Journal’s work is thrilling to me — it's exactly the kind of reporting I hope to devote my career to.”
Of course, Todd and I were thrilled to hear from Gabe and to learn of his journalism aspirations. I had the chance to follow up and carry on a conversation with Gabe, learning more about his aspirations and future. 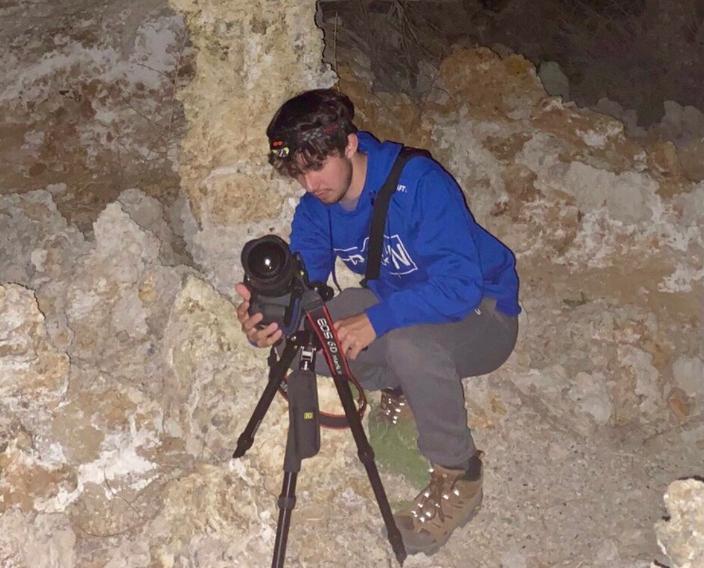 Castro-Root setting up a shot. Photo by Caroline Kreutzen
TOM SADLER: Gabe, your email was a delight to receive, and naturally Todd and I are both supportive of young people who want to pursue the environmental beat. Beyond the inspiration of a trip to Yellowstone and Grand Teton national parks, tell me what motivates you to be a journalist and especially one who wants to cover environmental issues like climate change?
GABE CASTRO-ROOT: Thanks for taking the time to talk with me, Tom. I think truth has the power to create change. Maybe that sounds naive, but I really believe it. Reporters have a huge responsibility to explain how the world works to the public, and the information they publish can lead to major policy changes that have a real impact on peoples’ lives. On a smaller scale, one of the things I love about consuming journalism is that I discover new ideas all the time. As a journalism student, if I can present a reader with a new idea or point of view then I feel like I’m succeeding.
SADLER: Specifically, what’s on your radar screen?
CASTRO-ROOT: Turning to the environment, I see climate change as the greatest issue facing my generation. It ties into everything else. If you don’t have clean air to breathe or enough water to drink, you can’t effectively focus on school, social relationships or other parts of life that bring us all joy. Reporting on the impacts of climate change, and highlighting the people on the front lines, is how I feel I can be a part of the solution. 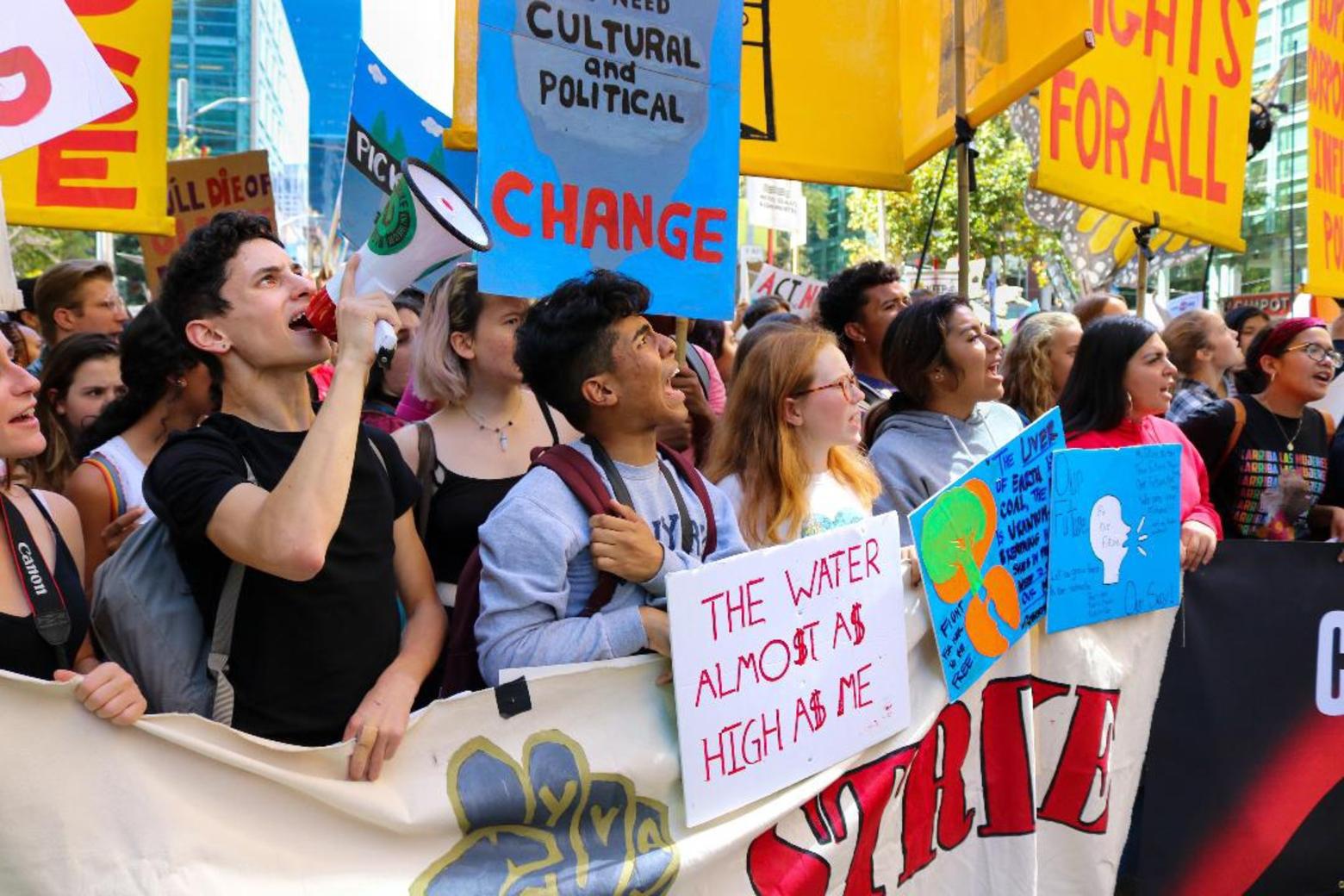 Castro-Root captured this moment of civic expression at the Youth Climate Strike in San Francisco in 2019.
SADLER: You’ve already had some articles published in your school newspaper as I recall, what did you write about?
CASTRO-ROOT: My first experience as a reporter was covering the Youth Climate Strike in San Francisco in 2019. It was a truly eye-opening experience for me; there I was, just a regular high schooler, getting to interview activists who were fighting to make a difference for the future of the planet. Then, a few months later, I wrote about the long road to recovery from a wildfire that destroyed thousands of buildings in Santa Rosa, about an hour north of San Francisco. Since I was reporting for my high school newspaper, my audience was my classmates. Part of my motivation in writing those stories was to say to them, “This could be any of us— the activists, the victims, or both.”
I also wrote for my neighborhood newspaper earlier this year. My one environmental story there was about a herd of goats that was taken around the Bay Area to eat invasive plants and reduce fire risk in overgrown areas. To report that story, I got to spend a day hanging out with the goats. That’s another reason I love journalism! 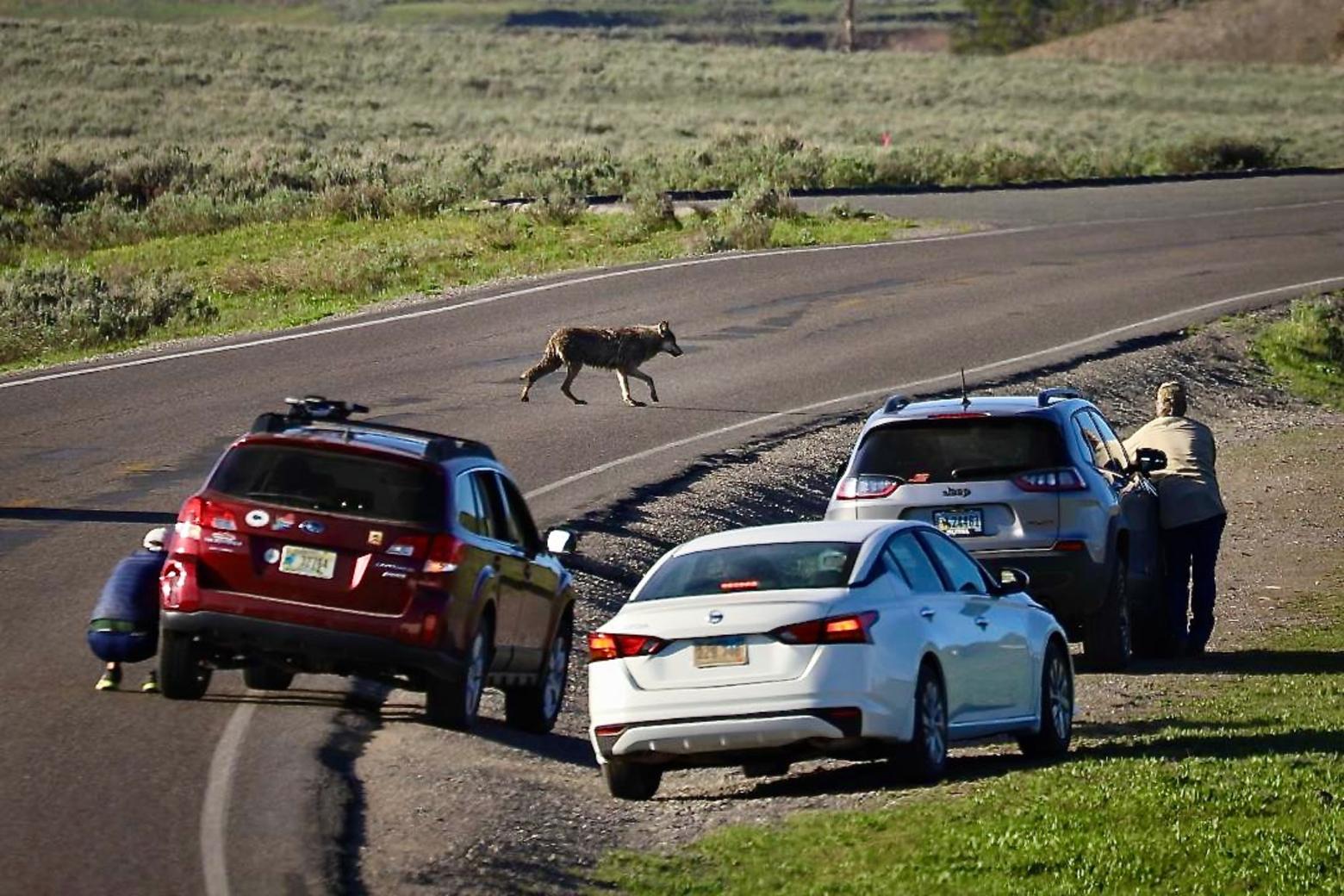 A lone wolf stops traffic in Yellowstone's Hayden Valley. Greater Yellowstone is the only ecosystem left in the Lower 48 with all of its original free-ranging large mammals that were here before Europeans arrived on the continent—a fact not lost on Castro-Root.
SADLER: When you look for an article to write, what news peg are you looking for? For example, are you looking for hard news, investigative, human interest, what?
CASTO-ROOT: So far, most of what I’ve written has had a human interest lens. In general, those are the stories that I find most captivating as a consumer of journalism. But I’m not at all wedded to that angle, and I know in college I’ll have the opportunity to try a wide range of reporting styles. I expect my interests to shift. You obviously have much more experience than me, so I’m curious in your career which of those angles you’ve found to be most compelling?
SADLER: That’s a good question. I’ve been fortunate to try my hand at a variety of styles. I try to think about the audience I write for or communicate with and use a style that will be compatible. Of late, these conversational style pieces have been my favorite.
You have a lot to look forward to as you start this journey. If a professor were to ask you, “So Gabe, what do you want to work on, what do you want to write about?” How do you answer that question?
CASTRO-ROOT: I want to write stories that make people think about something in a new way. I also hope to use my voice to elevate people who have historically been left out of the conversation. When it comes to environmental issues, for example, it’s often people of color who suffer the greatest impacts while having little to no voice at the decision-making table. That obviously needs to change, and I think journalists have an obligation to those communities to make sure they’re well represented in the media. 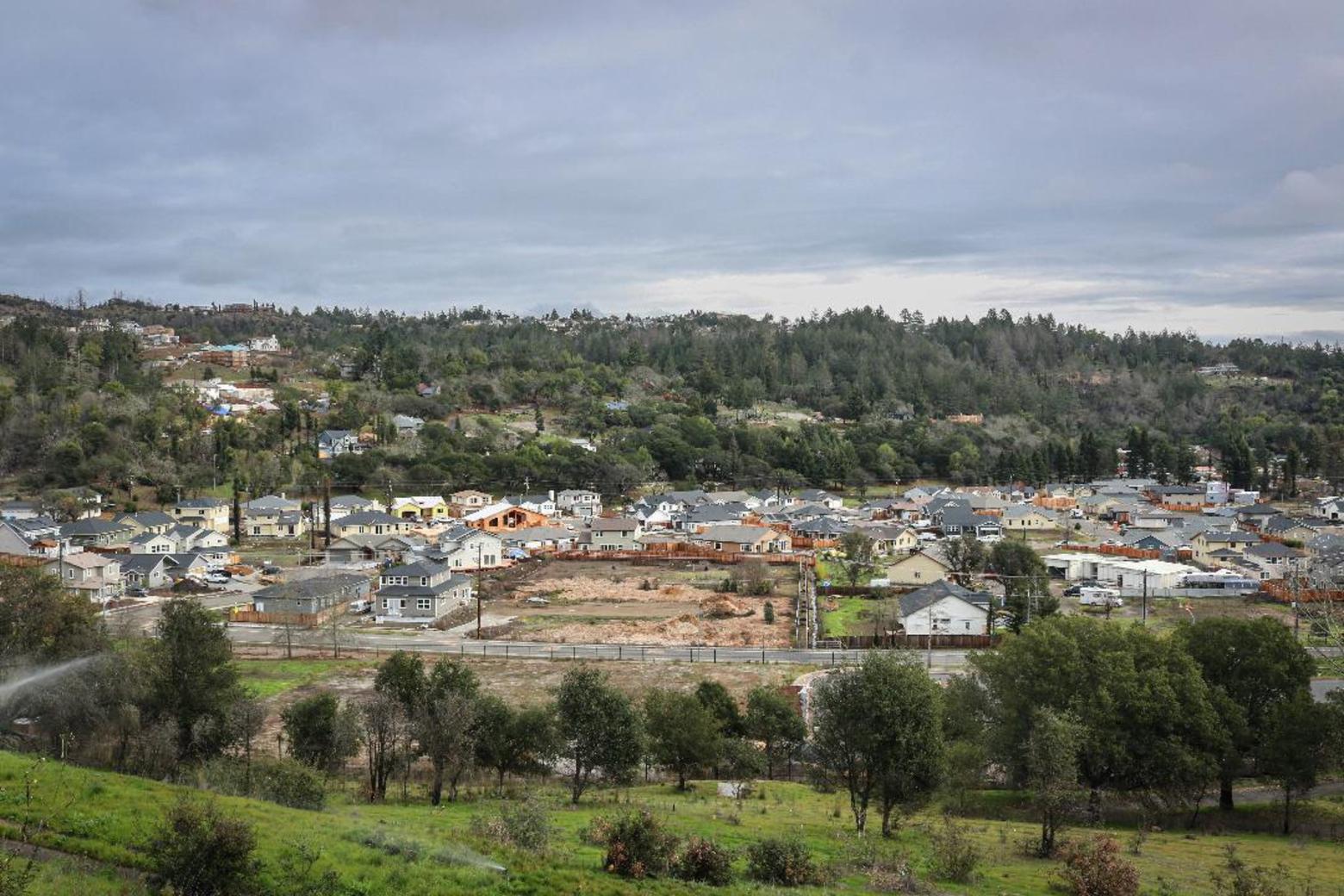 A neighborhood in Santa Rosa, California rebuilds after the Tubbs Fire. Issues of co-existence with nature take on many different forms in regions of the US where humans dominate the landscape. Pondering free-ranging wildlife and unbroken wildlands have introduced Castro-Root to a different context in thinking about the ecological health of big landscapes.
SADLER: What motivates you to take the time and make the effort to commit to journalism?
CASTRO-ROOT: On a personal level, I love how much I learn when I’m reporting. Journalism is a great excuse to pick the brains of people who are incredibly knowledgeable in their fields. Even as a student reporter, I’ve been amazed at how willing people are to share their knowledge with me. I got to spend a day learning how to replace parts in antique clocks when I wrote a story about a clock repair shop earlier this year. That kind of hands-on learning from the pros is something you don’t get in high school.
More broadly, I really enjoy living in a democracy. The press is an integral part of that. “Committing journalism” in my view is an act of uplifting democracy using facts, and to me that’s really powerful. Recently, though, I’ve been learning about how facts often aren’t enough to sway someone’s point of view. In your time covering the environment, how have you communicated with people who, for example, don’t believe in climate change or think fears about it are overblown?
SADLER: Unfortunately, I have. Fortunately, there are fewer and fewer instances. At this point I’ve stopped trying to reason with them. Want pains me is some of them are elected officials who can impact how soon we take significant action to mitigate the impacts. Their intransience toward action continues to make it worse. I probably won’t see the worse of it, but I fear for the future. Mother Nature bats last and it won’t be pretty.
Speaking about elected officials, you’re going to American University in the heart of our nation’s capital. I suspect that wasn’t an accident. Given that DC is the national political epicenter do you think you might add politics to your beat?
CASTRO-ROOT: Definitely. I’m really interested in politics and follow it closely. Last year I volunteered for several congressional campaigns, including one in Montana, and those experiences made me much more confident in my ability to ask questions and gather information — obviously both essential skills for any journalist. Politics, like climate change, is one of those areas that’s impossible to avoid because lawmakers’ decisions affect everyone. The public has the right to know what they’re up to, and that’s where journalists are so important. So, I’m eager to be in DC and see where the political opportunities there take me.
SADLER: Thanks for taking the time to chat, Gabe. Let’s stay in touch and compare notes in future after we’ve taken our first walk together on Capitol Hill. 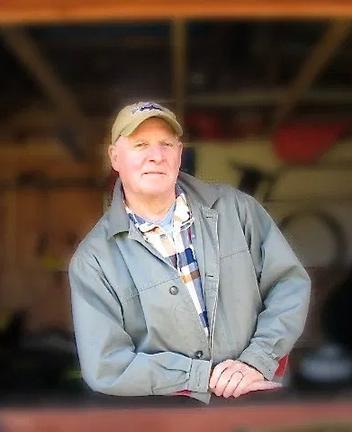 Tom Sadler is Mountain Journal's national correspondent in Washington DC who will be exploring stories important for Greater Yellowstone and the West that emanate from the American seat of government. Sadler, besides being a writer, has worked as a Congressional staffer, professional fly-fishing guide and conservationist, environmental policy researcher and was head of the Outdoor Writers of America Association.

Increase our impact by sharing this story.

GET OUR FREE NEWSLETTER
Never Miss A Big Story!
Tags: Tom Stadler