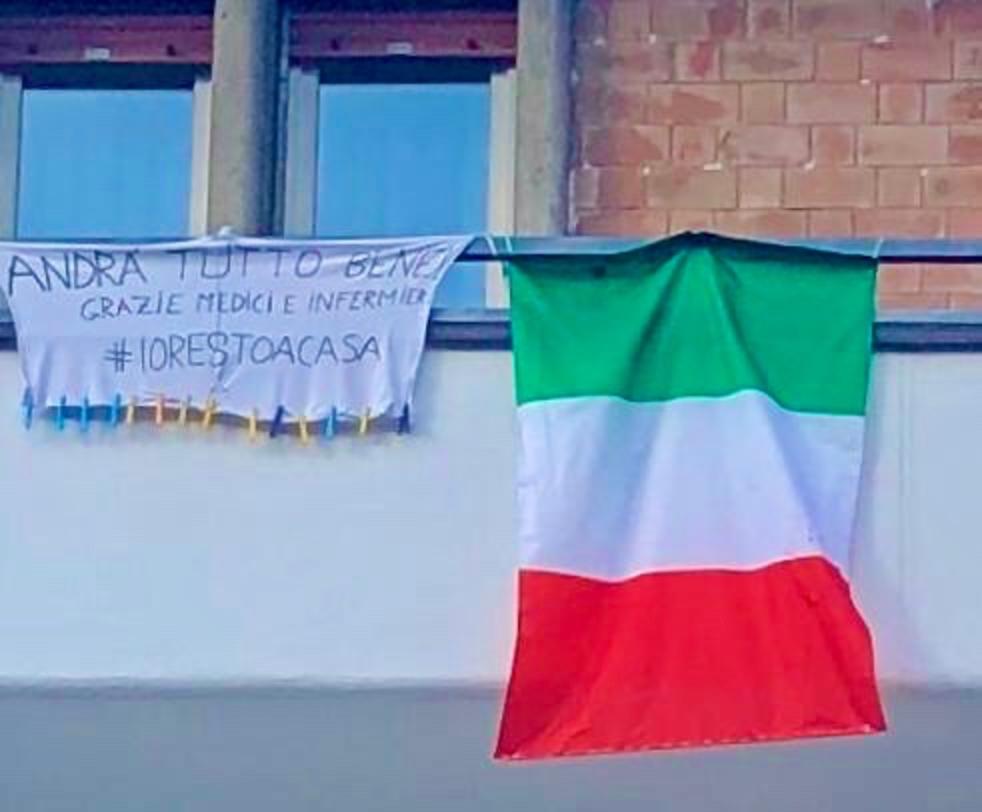 EDITOR'S NOTE: While youthful spring breakers reveling on the beaches of Florida this week were dismissing advisories from public health officials and partying like it's 2019, their contemporaries in Europe were dealing with the mortal reality of a pandemic. A good friend of Mountain Journal is Italian journalist Monica Tiezzi who is working from confinement at home in Parma with her early twenty-something son, Lorenzo Pedulla.
Lorenzo has a connection to the Greater Yellowstone Ecosystem. An aspiring nature photographer, he spent a semester studying at Montana State University, visited Bozeman on another occasion, and during one autumn went afield with Tom Mangelsen in Jackson Hole searching for legendary grizzly 399.  His uncle, Daniele Tiezzi, spent a summer working as a concession employee at Old Faithful. 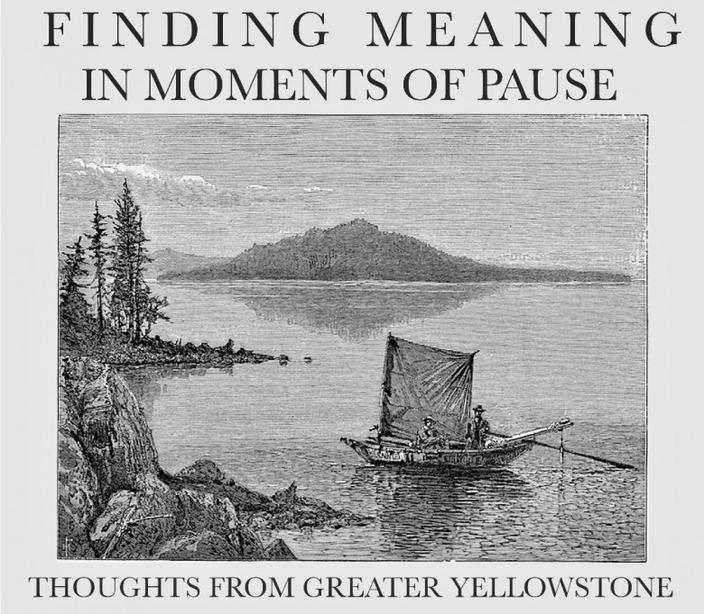 In the interview, below, Lorenzo speaks to the reality in Italy as novel coronavirus deaths have spiked in recent days, surpassing the toll in China. Writes his mother Monica on Friday, March 20, 2020: The Tiezzi family knows what adversity is. During the Second World War, Germans brutally occupied their small hilltop community in eastern Tuscany and Allied Forces bombed it. Covid-19 has brought the largest existential challenge to Italy in the last half century.
We offer this for perspective. "It is the hardest time of my life," veteran journalist Tiezzi writes. "I learned yesterday that a friend, a medical doctor who worked in Parma’s main hospital, died. He was 62. I cried for the first time since the beginning of all this. Almost everyone has friends or relatives affected. The city is silent except for the ambulances’ sirens and the emergency helicopters. Now I understand what it feels like to be in the middle of a war. I went to the supermarket yesterday and it took more than two hours to queue. I feel a survivor and live in fear because this virus for me would probably be lethal. I hung the national flag on my balcony and the writing 'everything will be fine.'  But I start doubting about it. The Parma Gazzetta has usually one page of obituaries. Today we have five pages. Stay strong and be prepared." 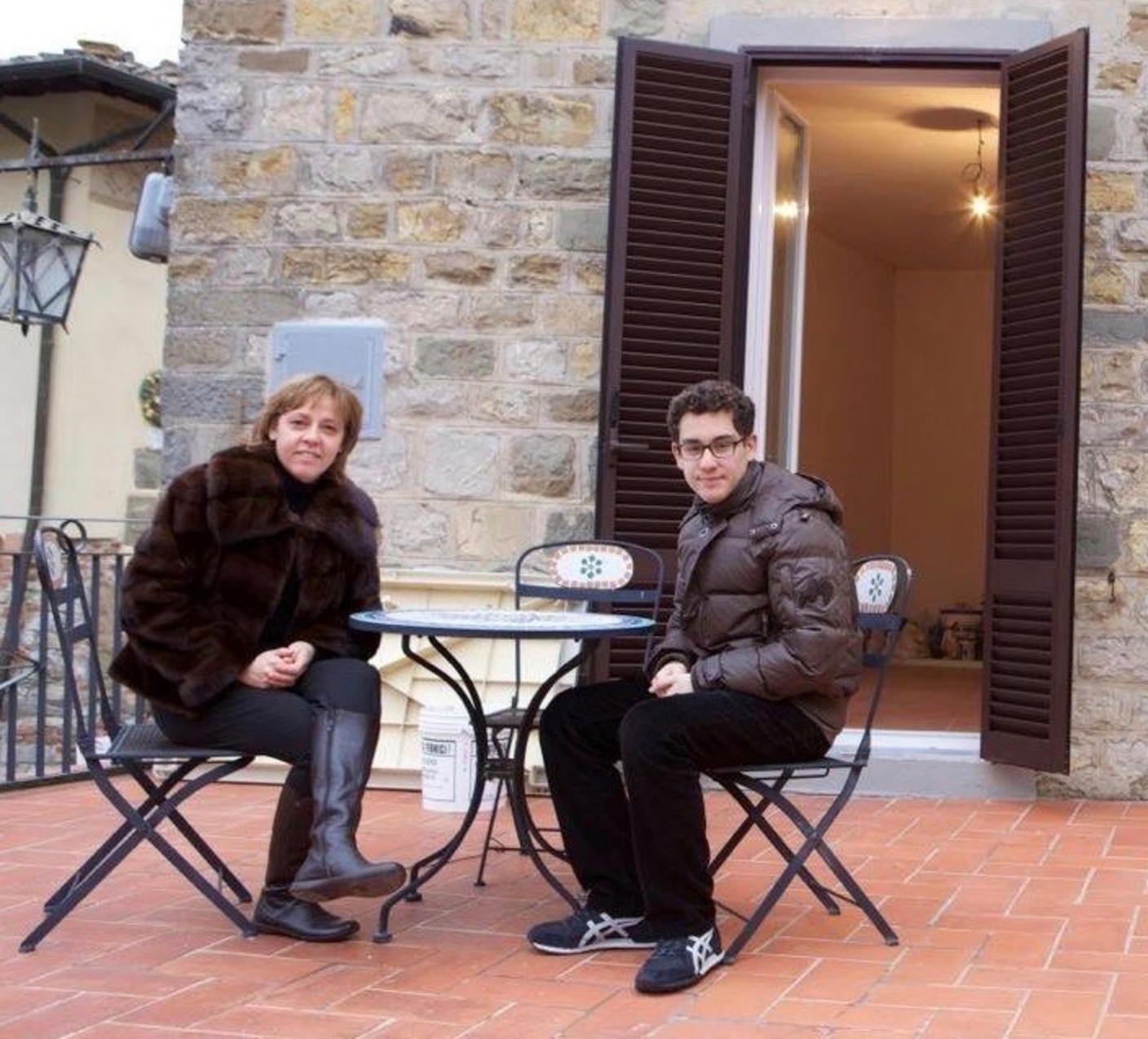 Journalist Monica Tiezzi and her son, Lorenzo Pedulla, prior to the outbreak.
MOUNTAIN JOURNAL: In the beginning, when Italy only had a few cases, what was the thinking among people your age?
LORENZO PEDULLA:  People didn't have an idea of what was coming. No one was expecting that a pandemic generated in Hubei was going to hit Italy so hard and so fast. Most of us were expecting other Asian countries, or even the USA, to be infected first.
When the virus started spreading, and the city of Codogno (50.000 people, together with other smaller cities) was quarantined, some people started understanding the gravity of the situation, but most of them, especially young people, were completely ignoring the virus. Personally, me and a couple of other friends had already started to reduce our social activities and to stay at home as much as we could (at that time universities and shops were still open). It was extremely frustrating to see people my age going out to pubs, restaurants and clubs.
I remember having more that one conversation with other people saying how irresponsible they were. I remember reading the messages they posted on chatrooms saying that "it's just a flu" and "journalists are terrorizing the population to sell more papers."
They were saying those things during what was literally the biggest quarantine of the entire European continent in the last one hundred years. Then, when a third of the country, including Parma, became part of the Red Zone (basically a cointainment area with special laws), people started to panic, rushing supermarkets and pharmacies. From that moment, we all know how things went. 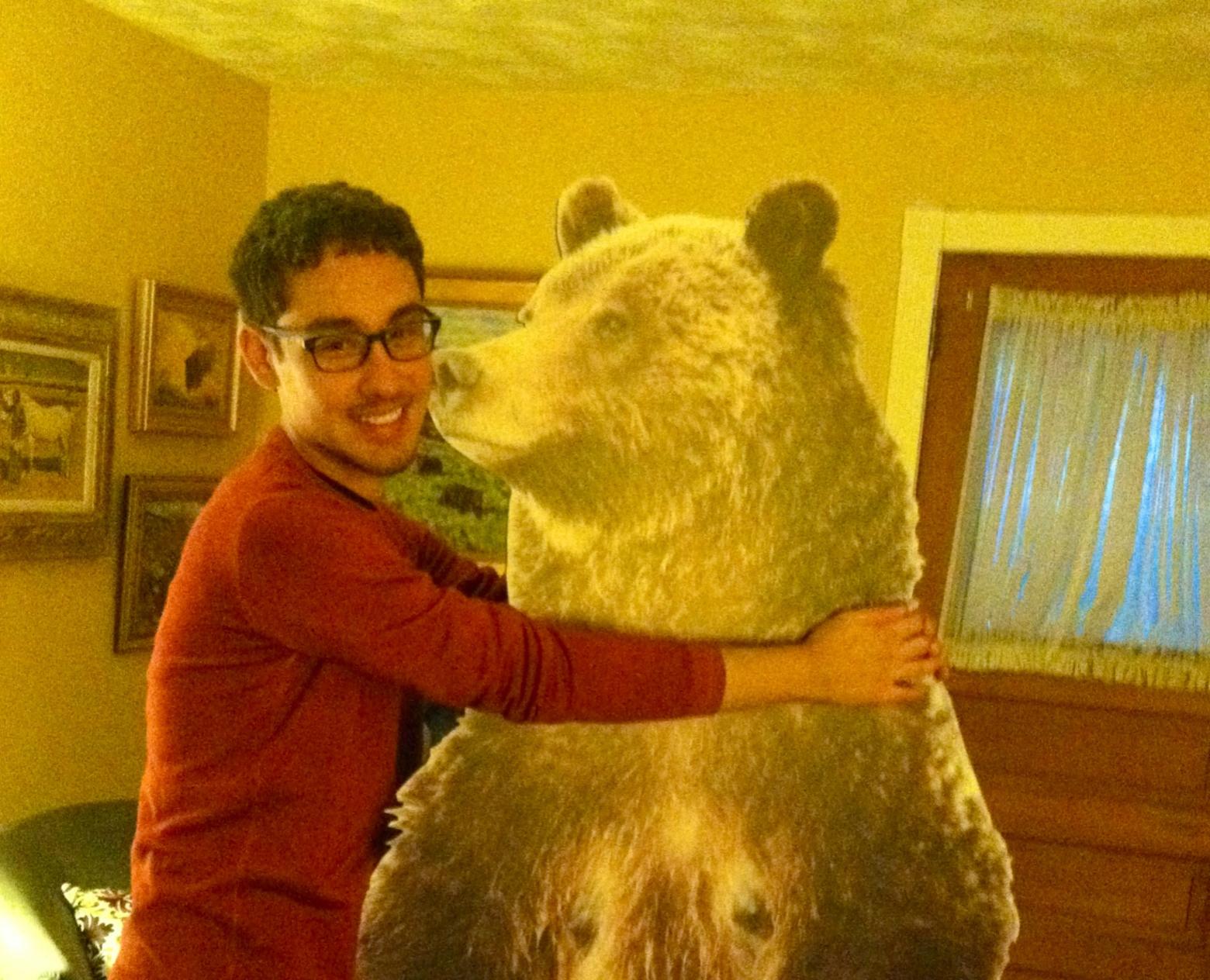 Lorenzo Pedulla during his semester in Bozeman where he encountered (a cutout of Tom Mangelsen's photograph of) Jackson Hole Grizzly 399.
MOJO; How would you describe the atmosphere/mood today?
LORENZO: Not good. Everyday the news are worse and worse, it's like a nightmare. Everyday we wake up, check the news, and see that hospitals are collapsing and more people are dying. In the last 48 hours almost 1000 people died. We hear the sound of emergency helicopters flying over us multiple times a day. In Parma tens of people are dying every day.
I don't know if Monica told you, but two people she knew died from the virus. And the worst part of all of this is that what Parma is going through is nothing compared to what is happening in Bergamo. In Bergamo there are so many deaths every day, to the point that they need to perform mass funerals and use army trucks to transport the coffins of those who died because there is no more space in cemeteries. Yesterday we also heard that the number of deaths in Italy surpassed the number of deaths of China. We try our best, but it's almost impossible to keep the morale up when hearing news like this. 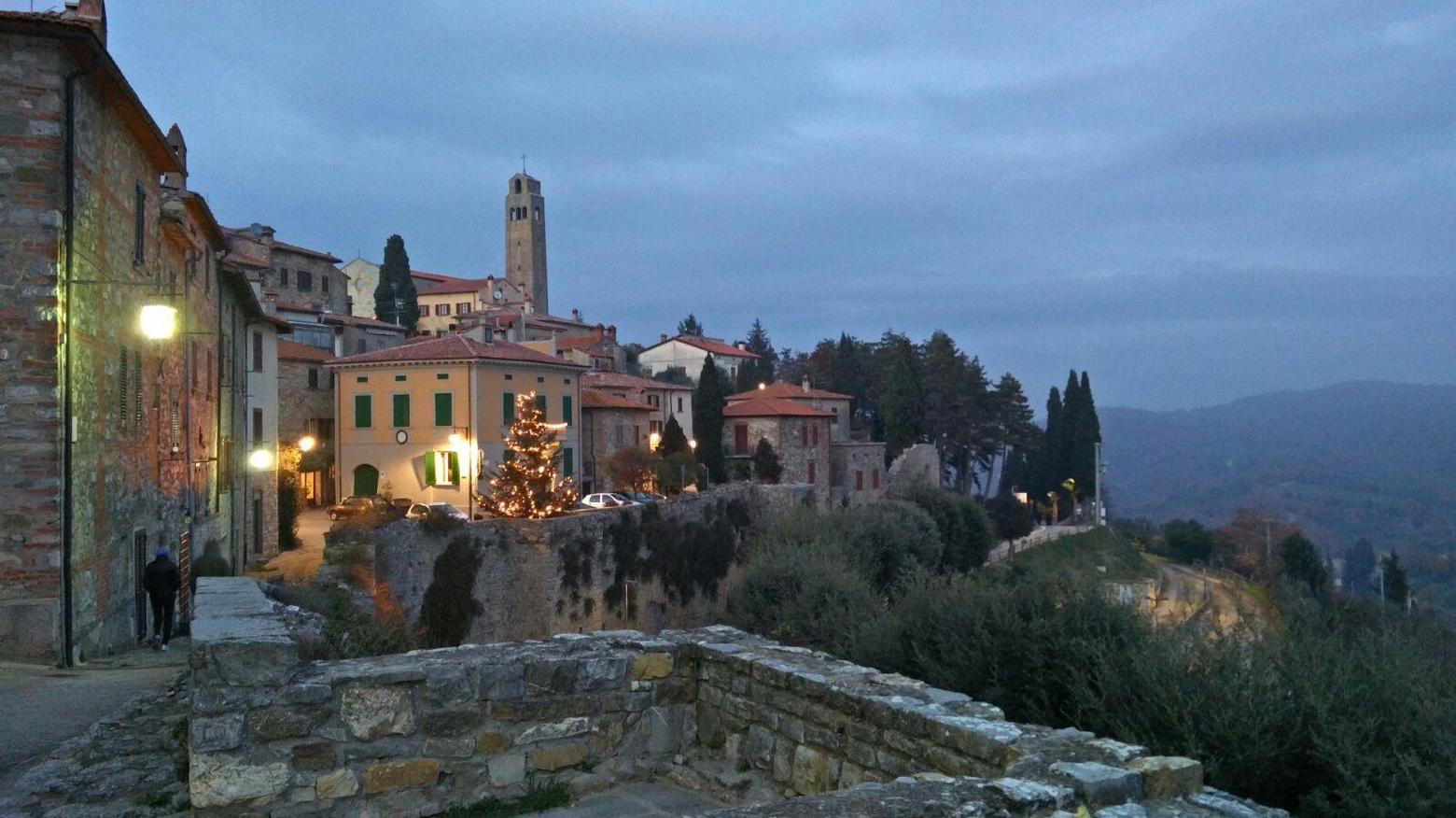 It was only a few months ago that Monica Tiezzi and her son, Lorenzo Pedulla, spent the Christmas holidays with her elderly parents and family in their ancestral hilltop town outside of Arezzo. Today, Covid-19 has brought a shock that no one in Italy could have imagined.
MOJO: Italians are known for their free-living, life-loving spirit.  How has coronavirus affected that?
LORENZO: As i said before, it's really hard to be positive, .but something strange is happening. I was talking about this with Daniele [his uncle] on the phone just yesterday. It seems like we Italians have our special way of dealing with fear and sadness. I don't know if you've heard of this, but people here started to organize flash-mobs like like singing, playing an instrument or clapping hands at their windows.
People also started to hang the Italian flag and other support banners on the windows. We also decided to particapate (i'm sending you the pic). Coronavirus changed the way we live and interact, but not our love for life. I'm 100 percent sure we will come out more stronger and united after this.
MOJO: What are you learning—what have you learned?
LORENZO: It is a little early to say what we have learned. Personally, i've learned that we need to be prepared. We were the typical family that was buying groceries every 4 to 5 days, now we quickly learned that you can go out twice a month and have enough to eat. Same thing with medicines.
On a national level we learned that healtcare is so much more important than what people can imagine. Together with education it should be the number one priority. Some say Italy has one of the best healtcare systems of Europe, yet we are collapsing. it scares me to think what could have happened if our public healthcare was worse than the current one.
MOJO: What is important for young people in America to know?
LORENZO: Please, stay at home and avoid social interaction. It's not about you. It's about the community you are a part of. This virus spreads extremely fast, very easily, and although it mainly affects the sick and elderly, it can also affect young people. In Italy there are numerous cases of intubated people, all under the age of 40.
A huge percentage of infected doesn't have symptoms, meaning that you can be a danger for others without realizing it. Italy a month ago was exactly like the US right now— life was normal. We did not imagine what could have happened and now thousands of people are dying. I would like every young American to watch this.
EDITOR'S NOTE: This is part of Mountain Journal's ongoing series "Finding Meaning In Moments of Pause." Read the others:
Can This Pause Make Us Smarter About How We Protect Yellowstone?
Love Of Pets, People And Safety In A Time Of Coronavirus
Tom Brokaw Says More Than Ever We Need A National Leader