Can This Pause Make Us Smarter About How We Protect Yellowstone?

The ecosystem holding America's first national park is facing whirlwind changes. The slowdown could be the wake-up call we need 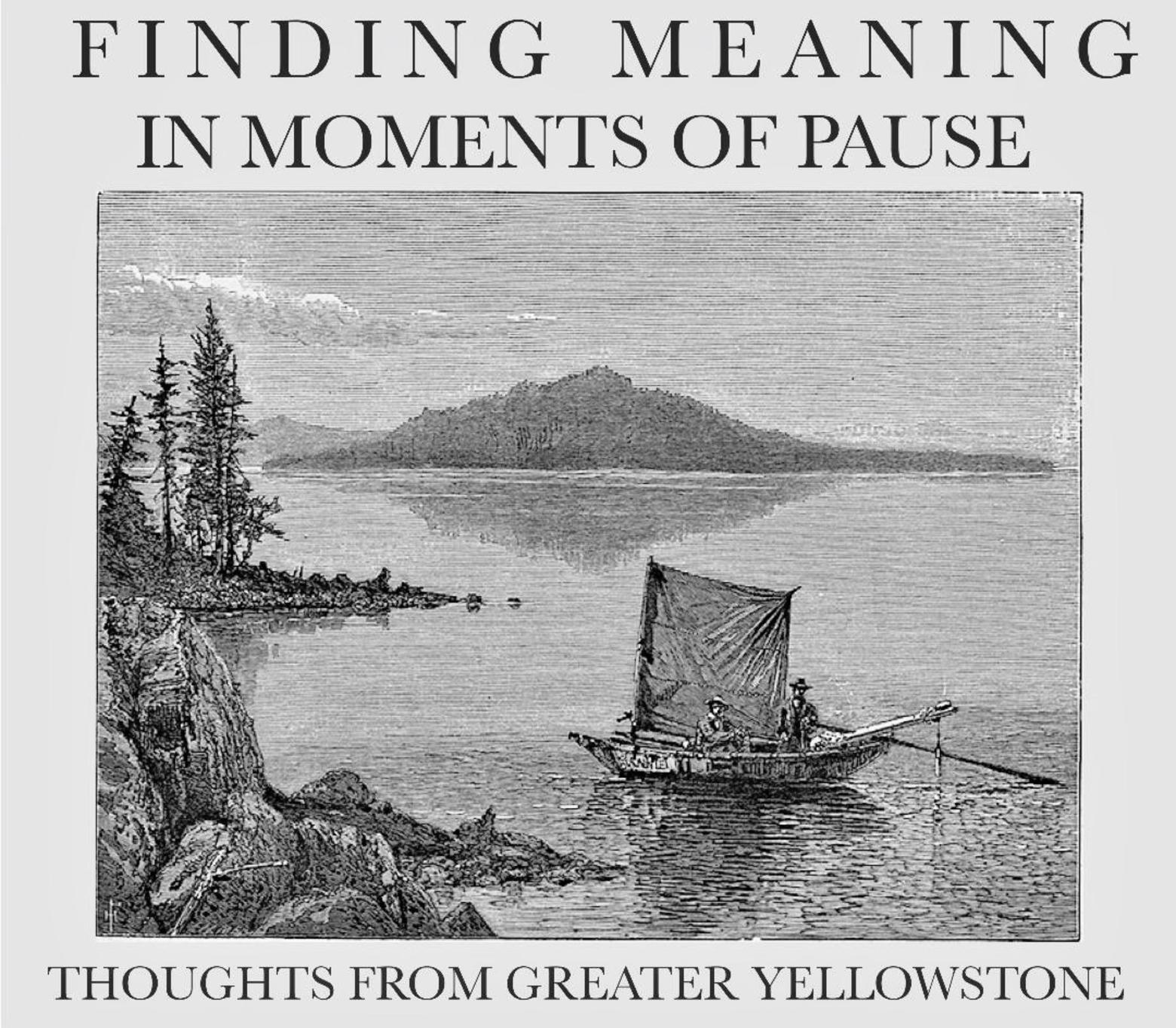 We are a country, society and region unaccustomed to dealing with involuntary pause.
We’ve been caught up in the race of progress and keep telling ourselves there’s no convenient time to take a breather. We put it off, waiting for the moment that always seems too elusive.
Now one has arrived, a break in the action, imposed upon us against our will.
We in the Greater Yellowstone Ecosystem are familiar with high adrenalin, the brisk pace set by economic boomtimes of late. At the northern tier of our realm, we have Bozeman, Montana, fastest-growing micropolitan city in the United States; we have Gallatin County which is the fastest growing county in Montana; and we have the Bozeman airport that year after year continues to smash records for the number of people flying in and out.
In the tarrying frenzy there has been no vision articulated or championed by elected officials for laying out where the area will be in another human generation. One reason offered up as an excuse? City and county officials have claimed they are overworked, understaffed and underfunded. simply trying to keep up.
Down US Highway 191 is the ski resort "town" of Big Sky where billions of dollars in recent years have been invested in real estate development, fueling a speculative fever that has the same devil-may-care atmosphere of a 19th century gold rush town, replete with a manic and largely disorganized approach to planning and zoning.
No civic or business leader in Big Sky wants to be quoted publicly acknowledging this fact, but privately, “off the record,” many people there admit that development has been out of control. The mindset is no different than what one finds in Bozeman.
So thoughtless and non-anticipatory has the approach been that the local Big Sky sewer system has been brimmed to capacity for awhile and various kinds of malfunctions have caused spills with some effluent reaching the liquid gem of Gallatin Canyon, the Gallatin River, one of Montana’s legendary fly-fishing streams.
Along with the construction frenzy in Big Sky, traffic levels on winding Highway 191 have made it one of the most treacherous roads to drive in the Northern Rockies; moreover, the valley that holds Big Sky and which cul-de-sacs at the base of Lone Mountain has no real backdoor escape route in the event of a summer wildfire blazing through from the east. It is a disaster waiting to happen.
Down in Jackson Hole, there’s Teton County, Wyoming—the richest per capita county in all of the United States where the part-time elite dwell in10,000 square foot neo-West baronial castles, some that cost $30 million to build while grunt laborers and working class professionals are unable to find or afford rentals. some of the seasonal help lives in tents. Paradise to those living at opposite ends of the spectrum has different connotations. 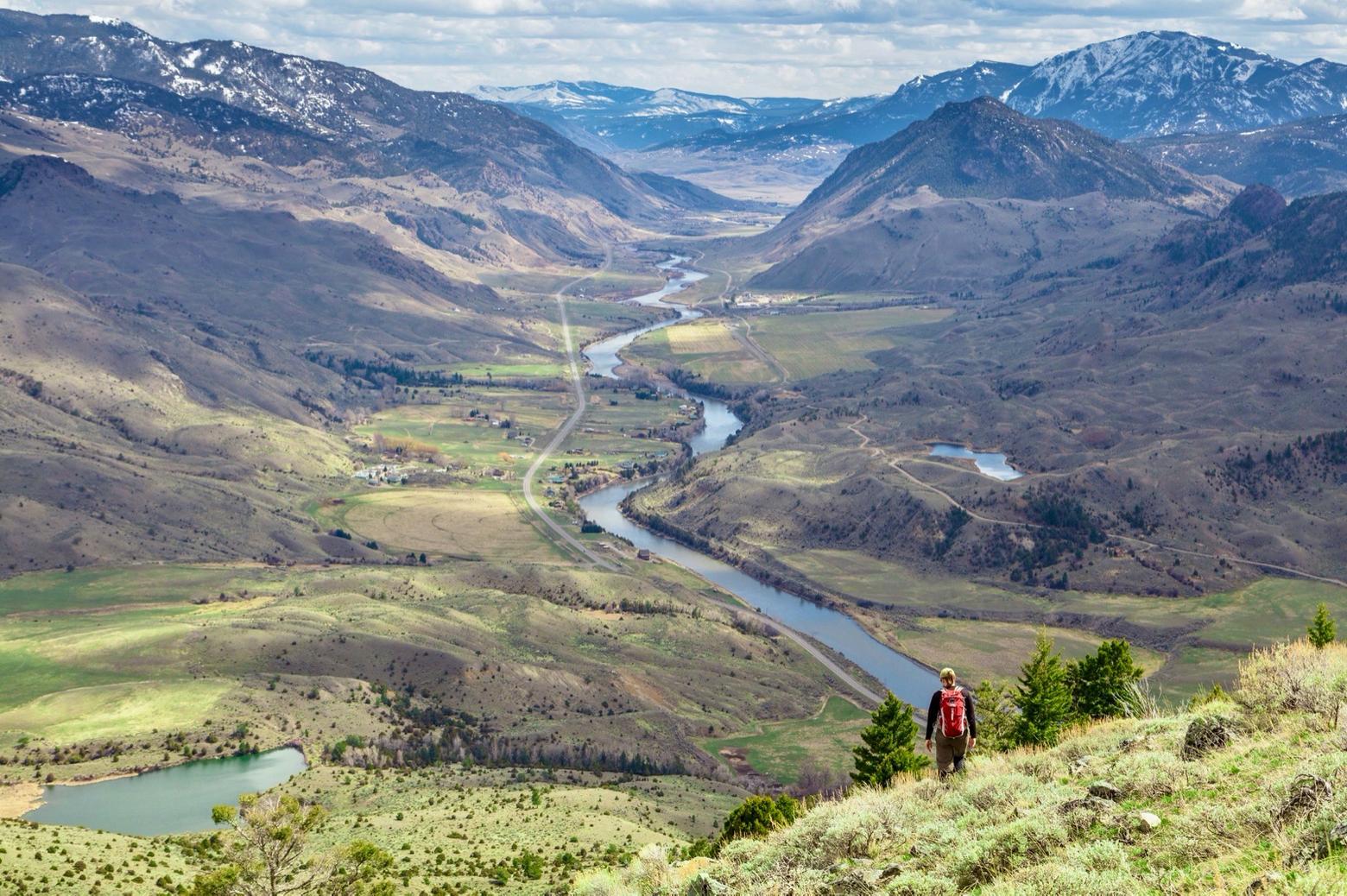 A lone hiker near Dome Mountain on the Joe Brown Trail, north of Yellowstone Park peering into the Upper Yellowstone River Valley. Photo courtesy Jacob W. Frank/NPS
Further south of Jackson Hole, in the Upper Green River Valley, the footprint of oil and gas development continues to balloon, overtaking critical habitat for migratory pronghorn and mule deer—one mule herd already has suffered a 40 percent loss in numbers from industrial impacts. The creep is continuing on public land deemed critical for Greater sage-grouse, which the state of Wyoming absolutely, positively promised it would protect in order to prevent federal listing of the imperiled bird under the Endangered Species Act.
Meanwhile, in the core of Greater Yellowstone, visitation to Yellowstone National Park has increased nearly every year for a decade and large numbers continue to pack neighboring Grand Teton which is also dealing with a high influx of airline travelers flying into the park.
Those crown jewel parks in summer are hardly places that yield quiet interludes with nature and any talk of limits is treated as taboo.
In 2019, statisticians with the US Geological Survey reported that tourism to Yellowstone generates nearly $650 million annually in economic benefits and visitor spending supports 7,089 jobs for the local economy. Nearby, Grand Teton anchored $792 million in economic activity in and around the southern half of the ecosystem, with visitor spending supporting 8,620 jobs. Combined, just for those parks, that’s $1.5 billion annually and 15,500 jobs.
Nationally, for every $1 invested in national parks it returns $10 in economic value, a ratio that is much, much larger in Greater Yellowstone. In addition, there are hundreds of millions of dollars generated annually through the downhill skiing, fly fishing, dude ranch, hunting and outdoor recreation economies.
Across Montana, outdoor recreation accounts for $7.1 billion in consumer spending and 71,000 jobs—the second largest sector in the state economy. In Wyoming, according to the U.S. Bureau of Economic Analysis, outdoor recreation generated $1.6 billion in economic activity.
Even as Wyoming’s once-strapping coal industry has staggered like a pummeled prize fighter on the ropes, nature-based tourism (which is really what outdoor recreation is) remained a reliable engine, insulating towns in the northwest corner of the state from the ill-effects befalling communities in the distant Powder River Basin.

In contrast to the shop-worn idiom “time’s a-wastin’,” what can we do now to make sure this isn’t wasted time for pondering possibilities we otherwise wouldn’t? Until now, the most valued and yet scarce asset in our lives has been the moments that allow us to take stock of things only visible during a pause.

Outdoor recreation has become its own form of an extraction industry, no different from that of real estate. Like every industry its health is measured according to traditional metrics—rising revenue, recruitment of more customers, more users, more ways of monetizing a finite resource.
There has been no vision for Greater Yellowstone championed by government civil servants, notably from leaders of the National Park Service, US Forest Service, Bureau of Land Management and US Fish and Wildlife Service; at least none that lays out where this public-land rich region will be in another human generation. It hasn't happened for a number of reasons that go beyond the short-term tenures of those in charge. 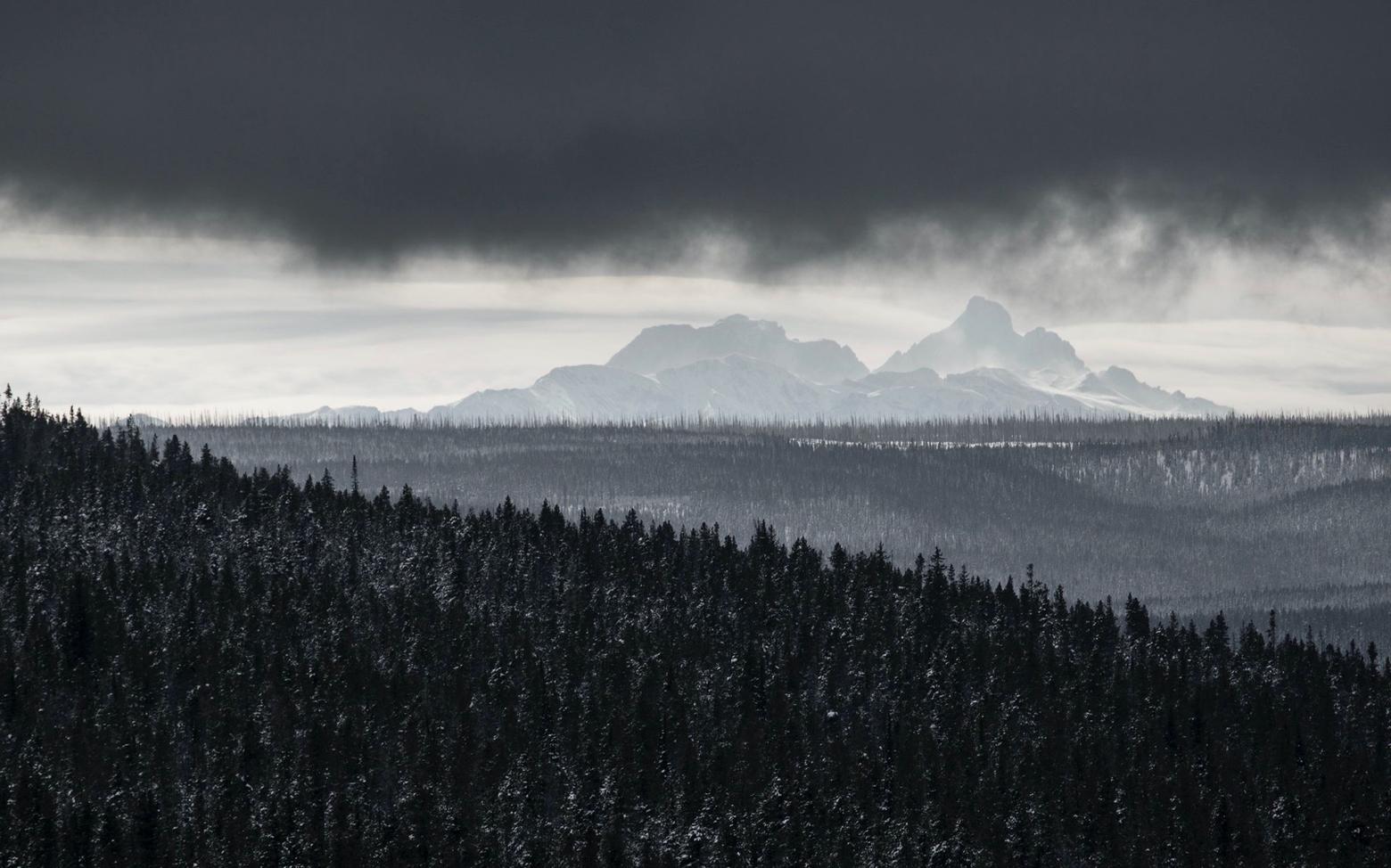 The Tetons rising above Yellowstone's southern horizon. Photograph courtesy Neal Herbert/NPS
Leaders often claim they are overworked, understaffed and underfunded. Privately, they are afraid to act boldly because it might threaten their job security. They're too afraid to craft the very vision that citizens who pay their salaries expect of them.
Now fears of coronavirus have ground everything to a standstill. The unimaginable is here and we don’t know how long it will last. We have moved into Instant Deep Recession with the economic lifeblood activities of Greater Yellowstone suddenly foisted, along with everywhere else in the country, into suspended animation.
If Covid-19 doesn’t kill people, the inescapable painful strategy to contain the virus, by prohibiting travel, is certain to devastate many of the businesses and jobs associated with all of the above. Livelihoods of our neighbors and fellow citizens are on the line and if we know anything it is that the less-off among us suffer disproportionately more than those with means.
No one welcomed this forced moment of pause, hardship and potential loss of loved ones. Yet it is here. It is a reminder that, in the end, no matter how much hubris we possess during boomtimes, including our blithe ignorance or denial of science, nature holds the trump card with regard to the future of our species. We have ignored this fact at our own peril.
Can this lead to an awakening?
Conspicuously absent during these soaring years of sprawling human footprint in Greater Yellowstone has been any meaningful reflection on just how special the Greater Yellowstone Ecosystem is—not just in the West, or the US, but globally. Getting the region highlighted in a special edition of National Geographic, as occurred in May 2016, doesn't cut it.
There’s no other ecosystem quite like it. As you read this on your laptop or cell phone now, or when you sit down for a meal with your family, test your own ecological literacy and knowledge .Ask this question: name five extraordinary aspects of Greater Yellowstone that set it apart but which have nothing to do with it being a fine place to play outdoors.
Is the value of Greater Yellowstone, its incomparable concentration of wildlife and its unfragmented wildlands, only measured by the ability of the private sector to turn its assets into legal tender? And if that's your answer, then how does that square with protecting and preserving the five things on your list?
Greater Yellowstone faces serious issues. As we all hunker, this space will be dedicated to sharing reflections on how we emerge from this crisis smarter and better prepared to protect it in a way that has never managed to happen in any other part of the Lower 48.
In contrast to the shop-worn idiom “time’s a-wastin’,” what can we do now to make sure this isn’t wasted time for pondering possibilities we otherwise wouldn’t? Until now, the most valued and yet scarce asset in our lives has been the moments that allow us to take stock of things only visible during a pause.
Churches are closed but nothing should stop us from deeper consideration of our spiritual connection to nature and each other.
If you don’t understand what this means, spend some time conversing with a vulnerable elder or a terminally ill friend. Ask them what they think is important. Ask them what they’ve cherished most about community, family and being able to live in or visit a region like ours. Most will provide an answer that has nothing to do with money or status. Most have greater appreciation for the future they may never see—a world as it ought to be, than we do in our race to get ahead.
EDITOR'S NOTE: If you are interested in contributing an essay to this series, reach out to us. We want to hear from people who can help us put what's at stake in better perspective. Be well and safe wherever you are.
ALSO READ these stories in the series:
Inside The Storm: A Young Italian Sends A Warning To His Contemporary Millennial and Gen Z Peers In The Northern Rockies
Love Of Pets, People And Safety In A Time Of Coronavirus
Tom Brokaw Says More Than Ever We Need A National Leader