Danielle Oyler teaches people how to live and recreate smarter around places where bears live. How knowledgeable are you? 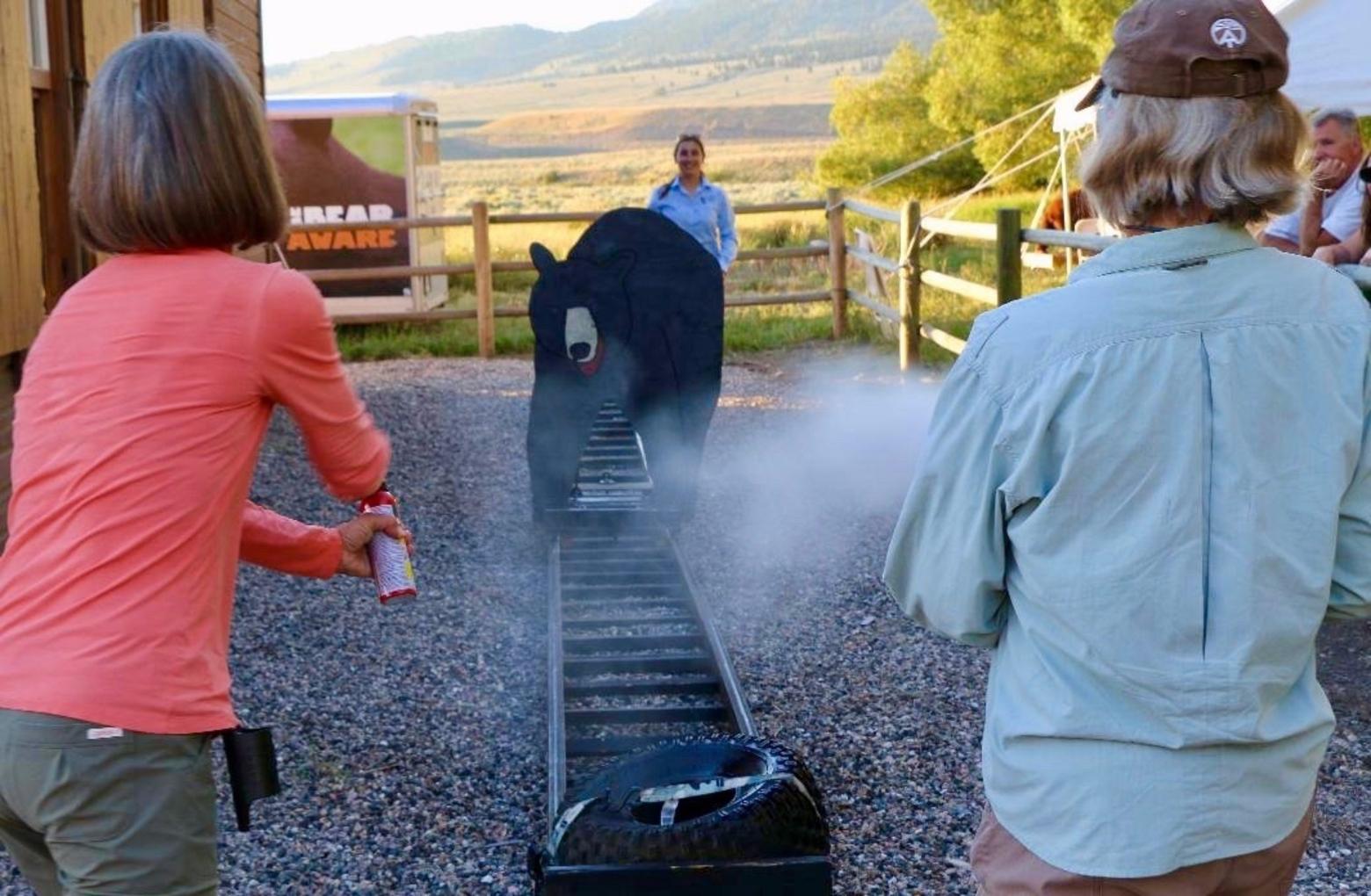 Even when carrying cans of bear spray, not all outdoor travelers are prepared to deal with a moment of truth. Here, Oyler leads a bear spray clinic using a simulated bruin. Photo courtesy Danielle Oyler
In grizzly country, no season is more harrowing— for bears and people—than autumn.

Bruins are on the move. Driven by the physiological condition known as hyperphagia, grizzlies are trying to consume as much high-calorie food as possible prior to hibernation. The protein they consume and fat they put on their bodies will enable them to survive a long winter slumber.

If that weren’t dramatic enough, their wide-ranging quest to find enough natural edibles coincides with big game hunters taking to the backcountry. Bushwhacking off trail, moving quietly and stealthfully, trying to call in elk and deer, sometimes dabbing the air with musk to entice bulls and bucks, hunters also leave behind gut piles of field-dressed animals, irresistible to bears. As scientists have said, hearing the sound of a rifle shot has trained some bears to equate it with the ringing of a dinner bell.

Sometimes, this has put people and grizzlies on an unwanted collision course. Statistically, the months of September, October and November have yielded higher percentages of dangerous run-ins, yielding correspondingly, in recent years, high numbers of dead grizzlies, which in Greater Yellowstone remain classified as federally-protected species.

Danielle Oyler is on a mission to teach people how to move more safely through the environs where bears live and to live in grizzly country responsibly. She is part of an interagency program working across bear country in Montana called the Montana Bear Education Working Group.

Oyler, based in southwest Montana, will be giving a clinic on bear safety in Bozeman Thursday, Sept. 26 at Lindley Park Center (1102 East Curtiss).  As part of an evening titled "Bozeman's Night of the Grizzly," it will be followed by a talk from famed Greater Yellowstone grizzly mauling victim Barrie Gilbert who is a scientist, advocate and author of the new acclaimed memoir One of Us.  (Read our review and a hair-raising excerpt). The free events, sponsored by Mountain Journal, start at 5:30 pm and the public is invited to attend. 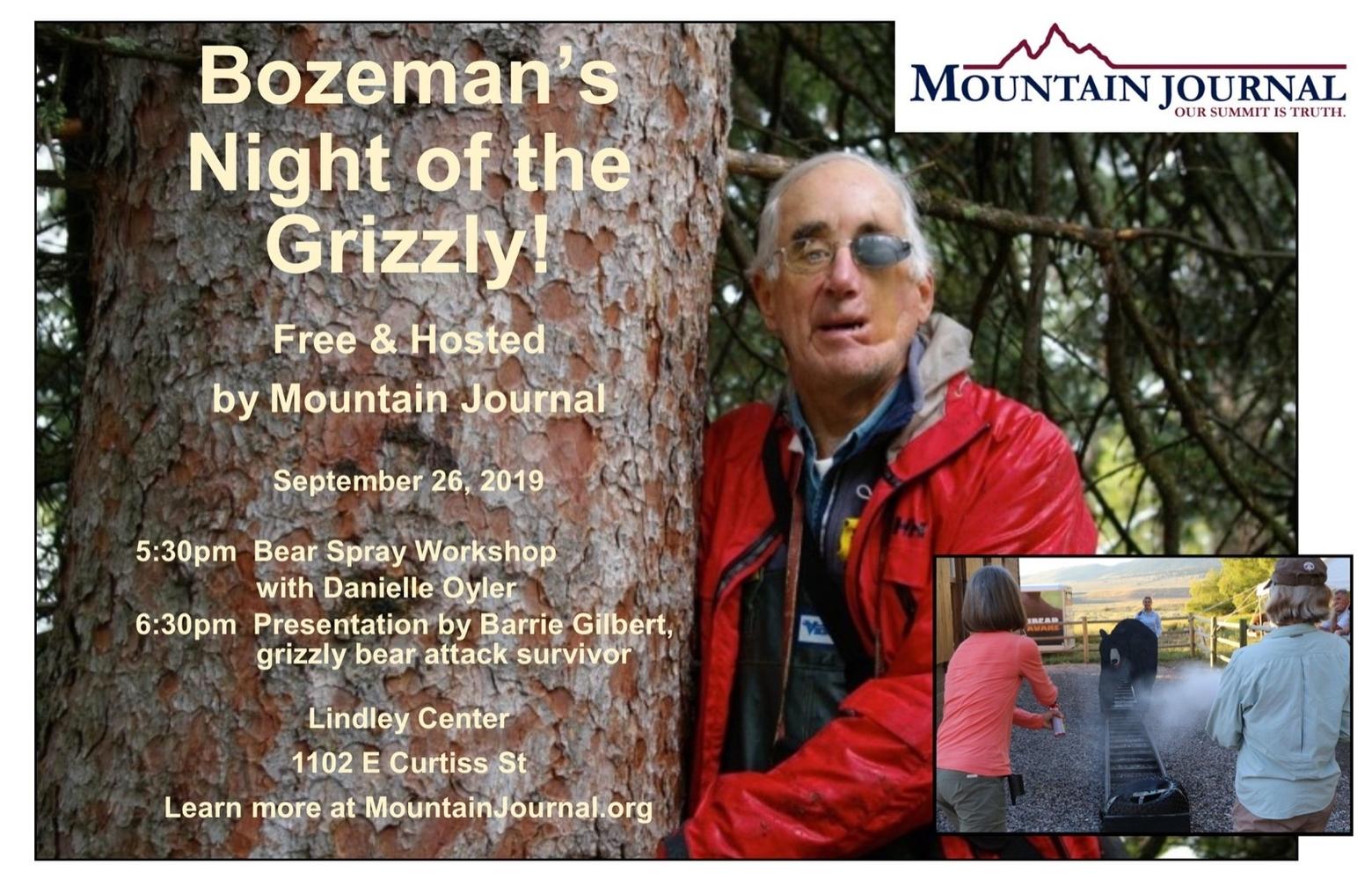 Oyler says that with better knowledge on the part of hunters, outdoor recreationists and rural land owners, most negative encounters with grizzlies can be avoided. One of the tools she touts like an evangelist is bear spray. Manufactured as canisters carried in hip and shoulder holsters, they emit, when discharged, pressurized mists of oleo-resin capsaicin that temporarily knocks out a charging bear’s ability to breath and see.

Considered a game-changing invention when first developed in the mid 1980s, bear spray exists as an alternative to carrying firearms. The best aspect, Oyler says, is its track record of effectiveness in non-lethally thwarting bear attacks. “I’m not going to tell those who carry a gun in grizzly country not to do it, because it can benefit anyone to add bear spray to what they already carry; bear spray works,” she explains. “And its deployment has helped prevent the injury and deaths of both people and grizzlies.”

Oyler’s moved to the Greater Yellowstone region with her family in 1999. Her parents worked as careerists for the National Park Service and lived in Yellowstone National Park. “It was a dream come true to move to a place like Yellowstone that is this wild,” she says. Among her first jobs was enlisting in the youth conservation corps where she became a crew leader, spending a lot of time in the backcountry. At the University of Montana, one of her professors was Dr Christopher Serhveen, the longtime leader of grizzly recovery for the US Fish and Wildlife Service.

Oyler also worked as an interpretive ranger in Yellowstone and a naturalist-guide for the Yellowstone Association (today Yellowstone Forever.] Both enabled her to observe bear interactions with other bears and sometimes in relation to people. Residents of Greater Yellowstone sometimes forget that for millions of people, seeing wild bears and wolves, because the opportunity is so rare, is counted as the thrill of a lifetime. However, it’s the people of the region who have overcome folklore and mythology and are trailblazing a new pathway of co-existence, she says. 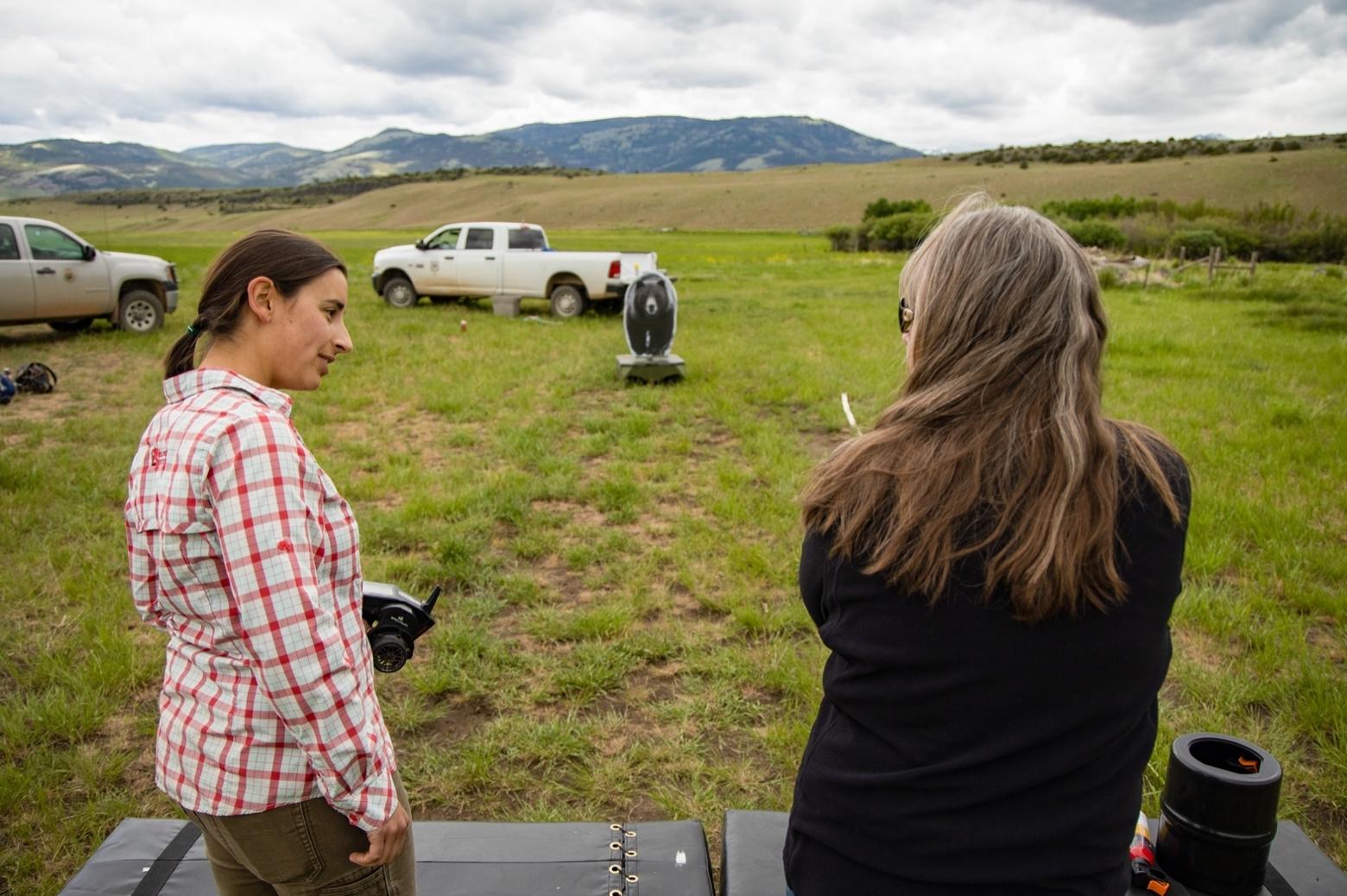 Danielle Oyler, left, offers advice on affective use of bear spray.
According to Oyler, preventing conflict isn’t only about providing secure habitat for grizzlies, knowing their natural history, respecting their status as animals capable of killing a human, and challenging tall tales with facts.

Hunting is a tradition but the way hunters move through the landscape often contradicts the rules that wildlife agencies teach to hikers. Those tenets including staying on designated trails to make one’s route predictable, hike in groups of three or more, make noise on the trail so that bears, especially sows with cubs, aren’t surprise, be vigilant with food storage, travel with heightened alertness along highly-vegetated river corridors where the sound of rushing water can drown out your approach.

Yellowstone Park notches 4.2 million visits a year in a few hundred grizzlies roaming across its front and backcountry and the number of incidents is, for some, remarkably low. Hunting is not allowed in Yellowstone but in Grand Teton National Park and Greater Yellowstone’s national forests, it is big business for outfitters and guides and a favorite pastime for many citizens.

Hunters, however, head off trail and sleek quietly to not alert big game animals to their presence, they use game calls and dab themselves with scents that entice elk and deer (which may also attract their predators), they don’t hunt in groups of four making noise and the carcass of any animal they fell can be attract hungry bears, causing them to behave more aggressively. As noted above, literature circulated by the state of Montana notes that bears may associate gunshots with a free big game meal.

Many hunters pack both bear spray and a sidearm with each autumn, it seems, bringing another story of how bear spray thwarted a serious mauling. Some hunters still swear by firearms but if they injure a charging bear rather than kill it, the likelihood of serious injury or death occurring is high.

Oyler says bear awareness is crucial in preventing human injury and improving our ability to live with bears. Citing analyses of incidents in Alaska, she said bear spray, when used properly, altered the behavior of aggressive bears 92 percent of the time. Meanwhile, 98 percent of the time proper bear spray use resulted in people and bears escaping unharmed. She says the statistics speak for themselves. In addition, she points to plenty of circumstantial evidence involving bear spray in the northern Rockies. And she notes that bear biologists, who cumulative have notched thousands of hours of field time in close proximity to grizzlies, trust in its effectiveness.

Some three years ago, Oyler was tapped by the Montana Bear Education Working Group to coordinate the bear program and bear technicians employed by the Forest Service on the Custer-Gallatin and Beaverhead-Deerlodge national forests. The idea of having a roving grizzly education specialist began with interest from Montana Fish Wildlife and Parks, the Forest Service, the Wildlife Management Institute, People and Carnivores, Wildlife Conservation Society and Fish and Wildlife Service. The Wyoming Game and Fish Department and Yellowstone National Park have their own bear aware programs.
Not long before he retired in 2018 Yellowstone Supterintendent Dan Wenk expressed dismay that more tourists did not carry bear spray in the park and it's one of the reasons that cans were rented by one of the concessionaires. 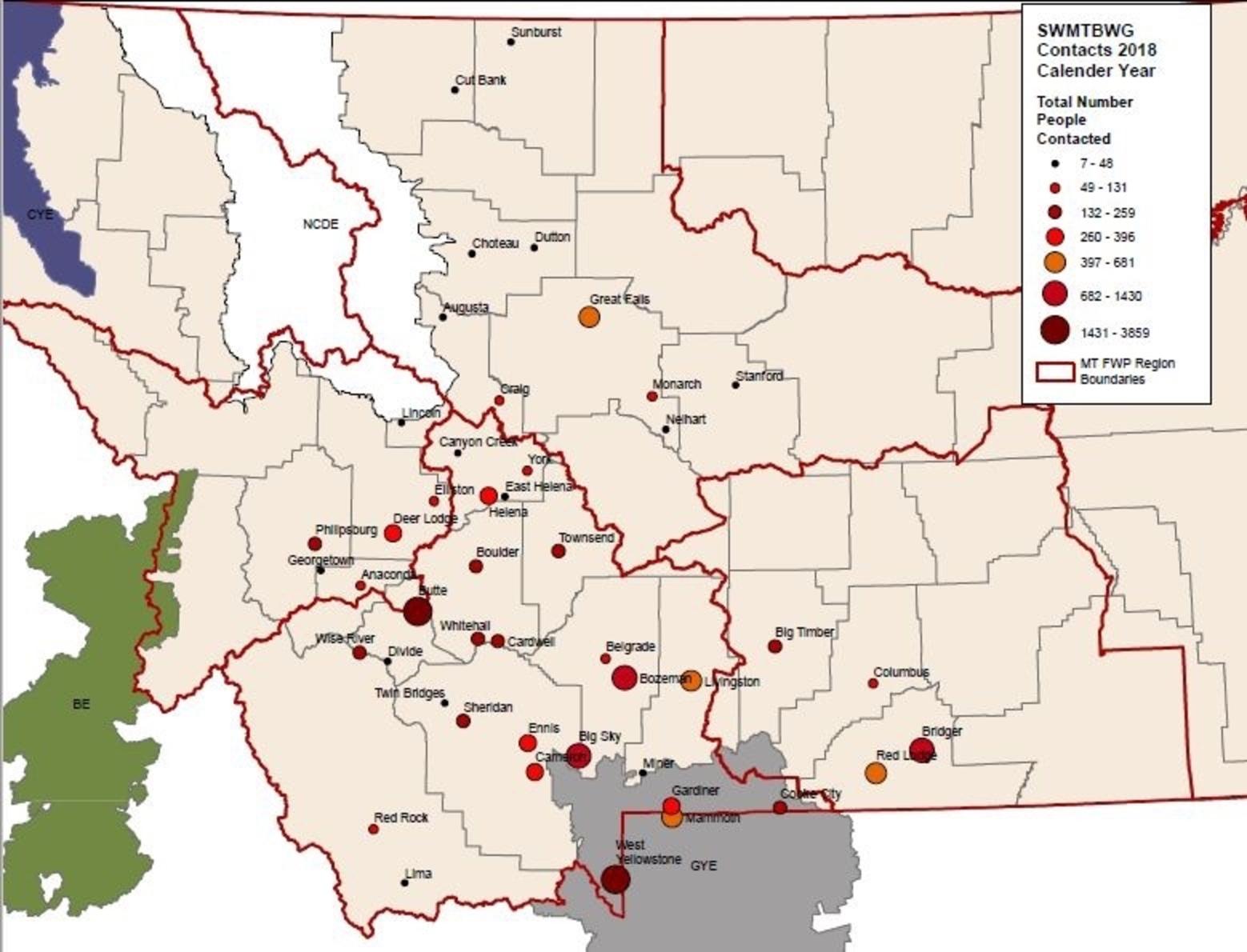 For newcomers, visitors and old timers, bear safety training courses have become a popular offering in communities throughout the northern Rockies. The graphic above shows how many people Oyler and colleagues reached in 2018 alone.
During her tenure, Oyler has spoken to scores of private land owner groups, flyfishing, hunting and hiking organizations and residents of suburbia who also learn about the importance of having bear-proof trash containers, pulling down bird feeders, cleaning grills and not leaving out pet food. Indeed, a bear that develops a taste for eating human food often ends up dead and responsibility for ensuring it doesn’t happen rests on us

Between them, Oyler and a colleague have been delivering clinics on bear safety and conflict resolution up and down the northern Rockies. Notably, they’ve also given programs in small farming and ranching communities east of the mountains out on the high plains where grizzlies have begun showing up.

“The recovery of grizzlies has a lot of parallels to wolf reintroduction,” she says. “The important thing is to have a dialog about what bear presence means. Especially in those rural communities and it begins with honoring and respecting the people who make their living on the ground, listening to their concerns.”

“The recovery of grizzlies has a lot of parallels to wolf reintroduction. The important thing is to have a dialog about what bear presence means. Especially in those rural communities and it begins with honoring and respecting the people who make their living on the ground, listening to their concerns.” —Danielle Oyler

The three states of Greater Yellowstone have come a long way with co-existence and its becoming a model for the rest of the world showing that humans can make space for large carnivores.

At the event in Bozeman, Oyler will teach attendees the basics of bear spray use, including hosting a quick-draw competition to show why every second of readiness matters. It’s a good opportunity for teenagers who enjoy spending time in the outdoors to learn a valuable skill that allows them to be more ecologically literate and less afraid in trekking through their own
wild backyard.
EDITOR'S NOTE: Here are links to an overview on bear safety operated by the Interagency Grizzly Bear Committee and the Center for Wildlife Information led by Chuck Bartlebaugh. Also read MoJo's feature story by Todd Wilkinson "To Live or Die in Bear Country: Counting the Seconds in Your Moment of Truth" and a piece by MoJo columnist Steve Primm, "Imagine Making a Wildlife Movie Whose Lessons Save Your Life"