Standing Rock Reflections: What Is Progress? 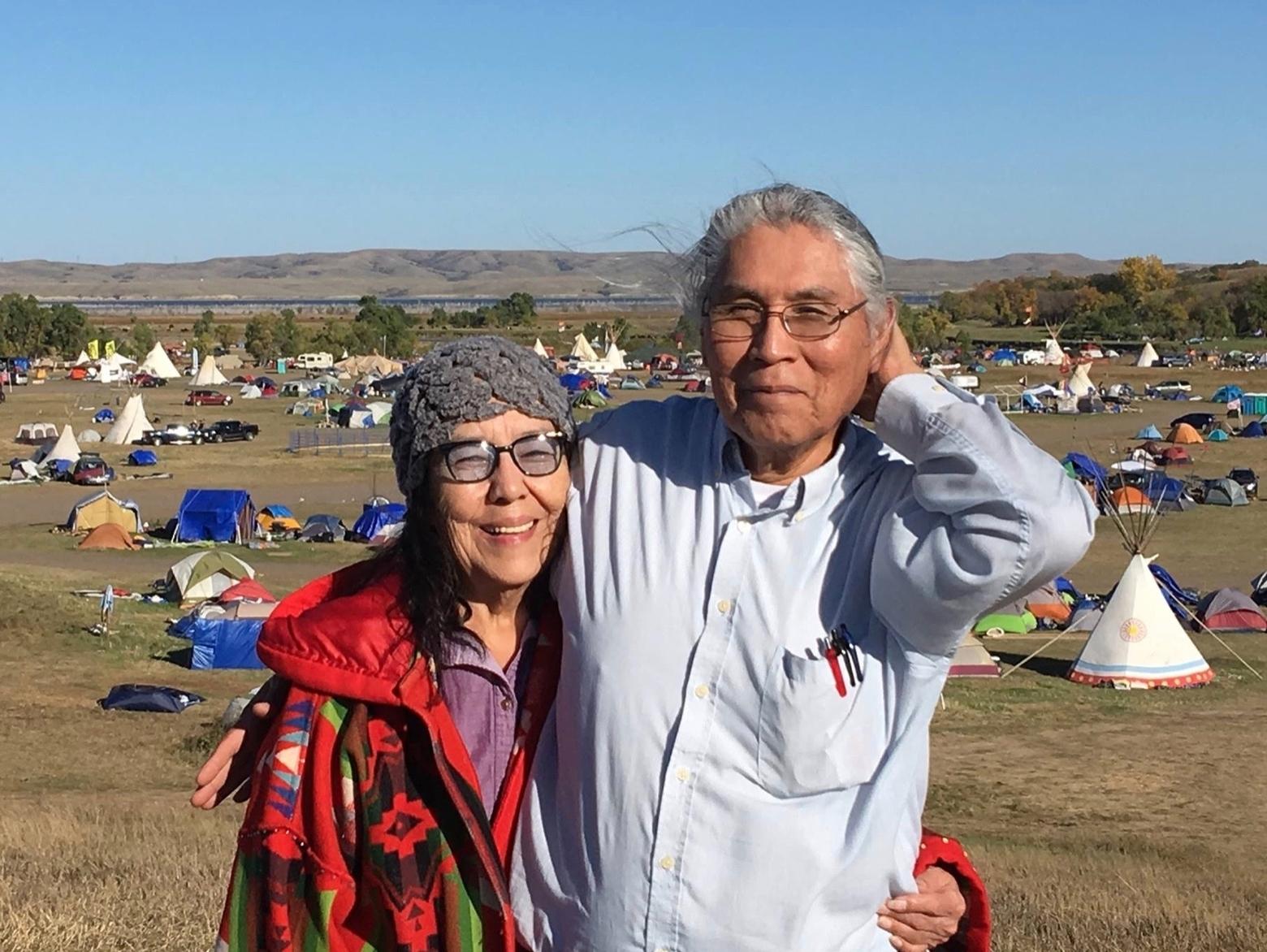 Lois Red Elk (Dakota) and her husband, Dennis Reed, joining people from across the plains at Standing Rock in 2016.
The Western poet and memoirist Terry Tempest Williams has written about "the range of memory" we humans have—a sense of history and place not told in books, but transcendent in a way in which language, culture, worldview and spirituality grows out of the land.
Mountain Journal's poet in residence Lois Red Elk says the stories of her people may not be written down in paper or stone, but they've been carried forward almost like an ark of being. Once upon a time before Europeans poured into the West only a few relative generations ago, Red Elk's Dakota Oyate ancestors dwelled in the upper Midwest of present-day Minnesota, Iowa and the Dakotas.
One element shaped their persistence, subsistence and perseverance: water. 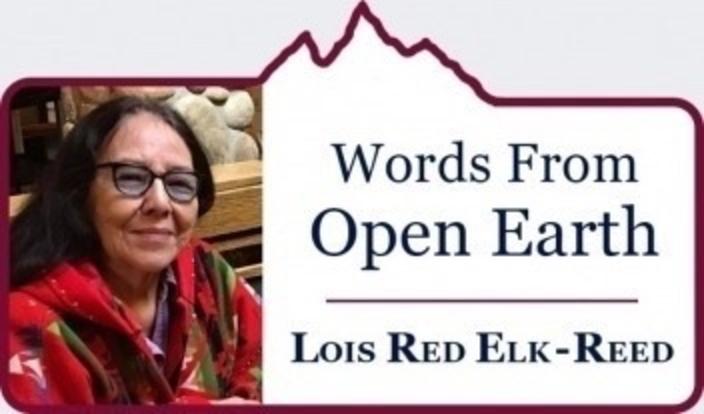 Water was the one and everything ingredient that brought all living creatures together; near it was where wild rice grew, where fish and beaver swam, where bison, deer, moose and waterfowl congregated; where encampments were made; where the blessings of terrestrial living were mirrored by a sophisticated grasp of cosmology that informed where they needed to be in certain seasons.
Today's push for holistic thinking about "sustainability" is a bit ironic for Red Elk because it's always been here on the North American continent going on thousands upon thousands of years before the Euro-Asian breadbasket of Mesopotamia husbanded its first crops on the other side of the globe.
As Red Elk looks back three years to 2016, she remembers the vigil of Standing Rock with more than irony. While some would claim it was a dispute over oil flowing through the 1,172-mile-long Dakota Access Pipeline (DAPL) corridor, for protestors it was about protecting sacred water, exercising indigenous sovereignty—the right to say no to unwanted development— guaranteed in treaties brokered between different tribal plains nations and the U.S. government, and an indigenous notion of the precautionary principle.  The latter, of course, is a scientific notion of "looking before one leaps in taking action" but it's a basic precept for survival.
The protests at Standing Rock over the U.S. Army Corps of Engineers' permit that allowed the DAPL to travel across the Missouri River and literally beneath Lake Oahe, attracted international attention. Media coverage highlighted, as a backdrop, the historical abuse and American-style genocide directed at indigenous people on this continent: it also revealed prejudice—call it racism—that still exists prolifically in American society.  Clashes between protestors and security guards hired by the pipeline company and law enforcement officials erupted.
Protestors were portrayed as radical, mischief-making Leftists and environmentalists who are out of touch with the way the modern world works.  Some of those who wanted to block the pipeline were labeled domestic terrorists.
Pipeline activists, meanwhile, were characterized as insensitive adherents of capitalism, driven by greed and racism, carrying an anti-science denialist agenda toward the relationship between the burning of fossil fuels and climate change.  The heavy-handed tactics of the security guards were compared to those of a police state.
Lois Red Elk and her husband, Dennis, went to Standing Rock from their home in Fort Peck, Montana to support the protestors.
Just a few weeks ago, she was at Fort Peck, with elders and young people in her community, welcoming the arrival of 55 bison from Yellowstone given a new home on her reservation rather than facing slaughter due to prejudice against bison in Montana.
"Have been remembering Standing Rock since it's been three years that I, and my husband, journeyed there with other members of my tribe," Lois writes to MoJo readers. "I had a dream of being there and participating in the best way I could which was to pray for the water and to share the value of Dream Culture with my Hunkpapa relatives."
Ultimately, the protest failed. On February 2, 2017, just two weeks after coming into office, President Donald J. Trump authorized the U.S. Army Corps of Engineers to green light approval for the pipeline to be built. Oil now flows.
"We are not opposed to energy independence. We are opposed to reckless and politically motivated development projects, like DAPL, that ignore our treaty rights and risk our water," Standing Rock Tribal Chairman  David Archambault II said in a statement at the time.
Red Elk says Standing Rock served as a catalyst for galvanizing many people across Indian Country. In many tribes there is a "Dream Culture" where visions are interpreted and shared.  What follows are two poems.  The first, Sleep Ordering Space, was inspired by Standing Rock and the time Red Elk spent there.
The latter is an older poem, a favorite of Mojo, titled Encounter at the Fort. How might a cavalry trooper, who had passed on, look back on atrocities committed against indigenous people in the West? It is inspired by real dreams that Red Elk and her sister had on the same night at Fort Union. Her poem is a haunting exploration and it speaks to how the afflicted possess the greatest power of all in offering forgiveness to those whose who consciences are loaded eternally with guilt and shame.  Read still another poem about the fort by clicking here. —Mountain Journal editors 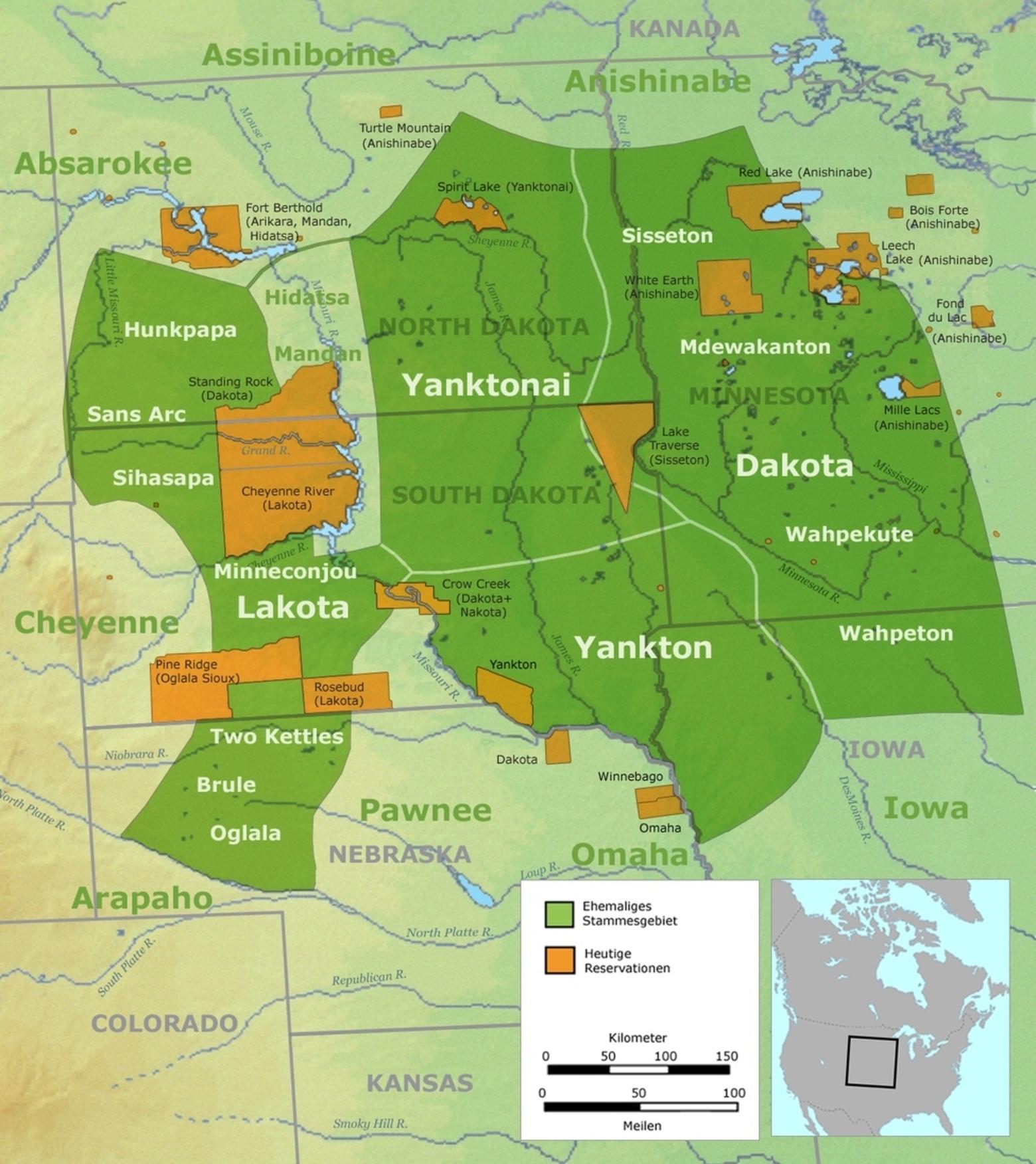 Homelands: where do your family roots originate? This graphic shows where the Lakota and Dakota lived generally prior to 1770 and location/size of current reservation.
by Lois Red Elk
Sleep Ordering Space
Like a new kind of legend, Seven
bands of the common people
dreamed of gathering at old campsites,
knew they were being called to light
fires again, to discuss a reoccurring
legend, a greed spilling, like wounded
blood, not clotting, but edging
toward old graves and ancient names.
They heard the water shudder,
telling them that the sacred mni was
about to be tested, to wound, then
to reveal hidden bigotries.
All had the same message,
left unheard of spaces in
dreams, spaces of summoning,
spaces where new songs turned on
and off, spaces of new knowledge
easing in and out of the mind, like
subtle fog sliding then retreating
from a glimmering river.
What was this calling where solace
has been my eternal longing.
There, I arrive in the early hours
of day, when breath from the creek
drifts among tipi poles and gives life
to prayers stirring into thought.
I’m floating above the camp,
a lone spirit wandering into private
dreams where horses exhale river fog,
where dogs awake, bark
where birds wing from silent places.
How did this heart wish to be
upon this place
where sleep is ordering space
where night is not yet closed.
I am humbled to be here,
to be included in a piece of dawn,
that scared moment
when light comes creeping over
grassy hills, allows dark to leave.
I see so many levels of dreams
floating for my spirit mind –
a prayer in motion
a thought weaving into shape,
subtle, except for this soul
that descends in and out
of this alternate space.
I feel light in all its sacredness,
I hold space where I’ve never
touched before or held.
Daku skan skan, that which makes
all things move.
I plead that I am worthy,
I beg only to keep this revelation
in quieted neurons, so that
I never forget while
I share with all dreaming children.
I pray to understand how to translate
details into meaning.
I inhale, close my eyes and when
I open them, I awake.
©Lois Red Elk 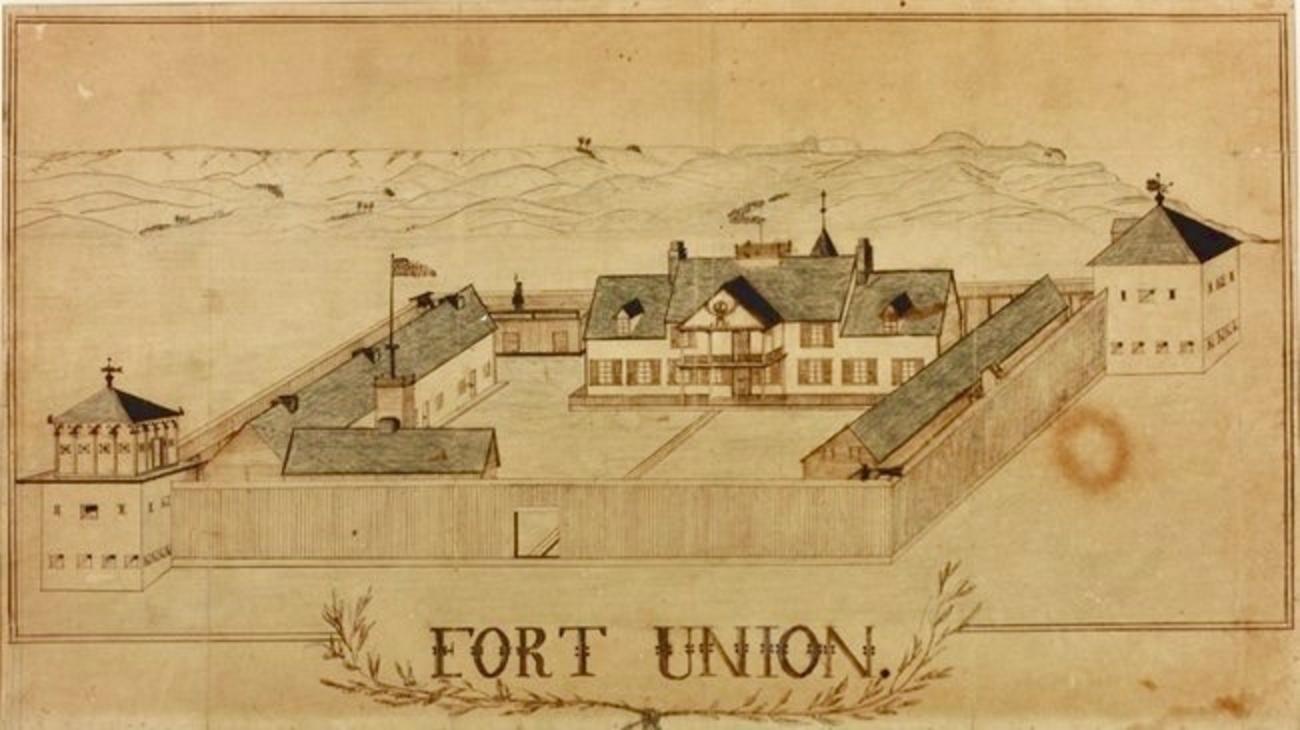 A crude drawing of Fort Union made by Benjamin Franklin Griffith, a soldier garrisoned at the fort in 1865. The original outline of the fort began as a fur trading post near the confluence of the Missouri and Yellowstone rivers and was built in 1828.
by Lois Red Elk
Encounter at the Fort
One year my sister and I were invited to sell our arts and crafts
at a place called Ft. Union, which is on the border of Montana and
North Dakota.  It was a full day of selling, bartering and discussion with
so many people earnestly wanting to know where their Indian
heritage came from and how they could find out the true meaning
of certain words - biases they heard and grew up with.  My sister
and I were tired, we had a good meal with our generous hosts,
but needed to sit down, rest our feet and contemplate events of
the day.  We were offered a place to sleep over night so we
agreed and were shown to our quarters which turned out to be in
one of the Fort bastions.  We both had no idea about the rumored
ghosts that haunted the building but would soon find out.  The
room we stayed in had no electricity as the Park Service wanted
to maintain the ambiance of the house.  The park ranger offered us
buffalo robes to sleep on which turned out to be very comfortable
for our tired bodies.  We were also given some old time candle
holders and candles.  We thought we would just read until the
candles went out.  It was a good decision that we decided to bring
flashlights with our luggage.  We both fell asleep before all the
candles burned down.  During the night my sister grew restless,
turned over and thought I was sitting in the chair next to her cot.
She raised her head and wondered why I decided to sit up and
read.  She looked again because the light was growing dimmer
and realized the person sitting next to her was not me.  It was a
soldier from another era.
“I am going to sit here for awhile, in the candle light.  It is
quiet and composed.  I feel a peaceful spirit floating through
the years to this moment.  It has been a long time since I saw
women busy and liking their work.  I just want to enjoy the
easy light rising and to clear my place in this atmosphere.
You have guessed who I am.  I was sent here to serve after
the Indian wars.  I never liked the hurt we brought here - to
the people and the land.  I know you love this place and now
that I am here I too understand that love.  It was the killing
coming at me so fast.   I didn’t have time to protect myself.
Now I wonder this place trying to get home.  You are good
people and know what to do.  Please pray for me”
Early the next morning, sister and I lit sage and sweetgrass and
prayed the spirit return home.  As Lakota people we know about
spirit-like images that haunt different places, but never thought we
would encounter one of them.  We were both glad to send out prayers.
©Lois Red Elk
EDITOR'S NOTE:  Encounter at the Fort appeared in Red Elk's collection of poems, Why I Return to Makoce, Many Voices Press, 2016