Back to Stories
Wildlife

Roadkill: An Emergency Responder, Absent A Gun, Is Handed A Grim Task

In his column debut, Steve Primm writes about finding carnage along a wildlife migration corridor in the Madison Valley

The red emergency lights from the fire truck sweep over the elk. She is sternal, her legs drawn up under her, head and neck up.  Such long necks.  “F--k,” I exhale, seeing that there is still active, unfolding carnage here.  I can see the driver, sitting up in the pickup cab, face lit by the glow of his phone.  The pale blue airbag lays limp from the steering wheel.
My mind clicks into triage mode:  I want to do something about the elk, but, as a firefighter, there are things I have to do first.  Size up the scene, and relay the information over the radio.  Check the vehicle occupants, then get high-vis emergency signs out on either side of the wreck.  Avoiding secondary crashes on the dark highway is top priority.
Most of the fluid in the road is elk blood.  How they survive is beyond me.  I step past the elk – she’s in shock and pain, swaying her head slightly -- and around the open door of the pickup.  It’s a nice enough pickup that it came with the satellite emergency service, and the reassuring, metallic voice in some distant call center is what I hear first.
The driver is ok.  He says so.  I tell him a lot of people decide they aren’t ok after an airbag has punched them in the face and chest, but he’s a big healthy guy, so he probably is ok.  There’s a slight airbag burn on the inside of his right forearm.  The pickup can go no further, but is safely on the shoulder. 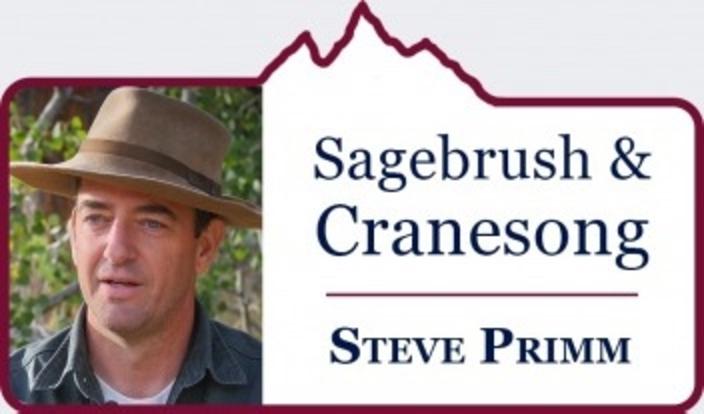 I back the fire truck up, climb up top, and heave one of the “Emergency Scene” signs down onto the pump.  I climb down after it, and set it on the road shoulder.  I stand it upright, and unfurl it.  Then I drive a ¼ mile forward, pull a u-turn, and do the same for the northbound lane.
I hope the elk has died while I do this.  She has not.  I hear her panicked, blood-flooded breathing as I walk back up to the disabled pickup.  I am monitoring radio chatter now, and know that a lawman with a firearm is 40 minutes away.
The driver is still doing fine, though disoriented.  Stunned, as we all would be, to find himself becalmed in the dark. Predictable plans, distance = rate x time, point A to point B, shot to Hell.  He tells me there were elk all over the road, and he couldn’t avoid them.
There are elk in the big foothills meadows here every spring.  Lots of them.  US Highway 287 slices right through a migration corridor. It connects elk that spend part of the year in Yellowstone with winter range to the west. Lots of highways cut through migration corridors in the Greater Yellowstone Ecosystem. Lots of animals, a surprising number, suffer fatal collisions with vehicles or they resist trying to make a crossing.
I am an emergency responder so my first duty is always to render aid to injured people. No one provides triage for the wild four leggeds.

The tall sagebrush and the scattered aspen stands upslope are ideal calving grounds – lots of food, lots of places to hide their babies until they’re strong enough to run with the herd.  The highway separates the foothills from the river, though, and lactating cow elk need a lot of water. No mother is going to deny her offspring what they need.
I walk back to the fire truck, its big V8 rumbling, lights flashing.  I think about my grim options in the absence of me not carrying a gun:  Halligan.  Small sledge hammer.  Pike pole.  The spike on the Halligan has its merits, but I can’t place it accurately on a moving target, especially one that could still deliver a dangerous kick or swing of the head.
The axe is the only choice.  I unstrap it from the truck, and test the handle’s fit to head.  I resolve to do this, to put the badly injured animal out of her misery. I walk back to the pickup and tell the driver what I am going to do.  I slip out of my bunker coat so I can move freely.
How many blows will it take?  I do not know. The elk had maybe sensed my energy, and struggled briefly to her feet.  Punctured lungs and broken bones could not carry her far.  She wanted to leave our domain, to cross the old barb wire fence back into the tall, dewy sage.  She could not.  The first blow, in the big target just ahead of her shoulders, paralyzed her, so that I could safely and efficiently do the rest.
Herds of cow elk can be very vocal.  They call back and forth as they move, probably keeping track of one another – kews, squeals, chirps.  They make a percussive, single bark if they’re alarmed.  Especially in fog, or in a snowstorm, it’s easy to imagine them as something other than terrestrial.  A pod of whales or a flight of tundra swans come to mind.  This elk was probably too savagely hurt to call out, but she wanted to be away from us, and back with her own.
Brain scans show that social animals – including humans – feel isolation or exclusion the same way they feel physical trauma.
The elk is laid on her side.  I draw my knife, slice through hide and carotids to make sure this is over.   I shine my flashlight across her ribcage, watching for breathing.  Muscle tremors pass through her, then subside.  A final exhale, and her legs extend.  Then, stillness.
I set the bloody axe down, and get back into my bunker coat as a I cool down from the exertion.  The night air is moist, and holds the smells of elk, blood, coolant, and transmission fluid.  A sliver of waxing moon marks the western horizon.
She is not the first large mammal I’ve euthanized with something besides a firearm.  A learned friend pointed out to me that euthanasia literally means “good death,” and asked whether the term is elastic enough to cover my atrocities.  “Brutal” now beats “painless” after a long wait, is the best I can come up with.
It is quiet – a few long-haul truckers on the highway, but we’re otherwise out here alone, the three of us.  We are thrown together in a tableau:  an ancient creature, running on last ditch panic, cut off from her kind; and two men, armored with technology, summoning what we need over miles, messages bounced through space.  We collide, we bleed, we hurt.  We try to set things right and be on our way.
The elk lies where I killed her. There is roadside litter near her – the ubiquitous smashed plastic water bottle, an empty cigarette pack – and I move it away.  She is not in repose – battered, bloody, smashed, hacked, and cut – but at least she rests in native grass and silvery green sagebrush, and not among our careless, ugly cast-offs.
Leaving her with road trash would be surrendering to our human selfishness, callousness:  as though the elk – like an empty bottle, a full diaper, a smoked cigarette – was of no more use to us.  That she became inconvenient because she wasn’t posing for photos in the golden twilight or providing a “challenge” for someone to shoot at.  She and her herd got thirsty, and crossed the dark highway to head to the river.
The deputy sheriff arrives from the other side of the county.  He efficiently dispatches his duties.  With a non-injury accident, satisfying the insurance company is the main requirement, so he gathers the information he needs.  We figure out how the driver will find his way to a bed soon, and wait for the tow truck.

Where did the other elk go?  Did they flee the mayhem of the highway, the way they’d bolt away from a predator taking one of them?  Are they out on the dark rangeland, waiting for us to end our blockade of lights, engines, voices?  Do they mourn for the one lost?  I have seen mother elk stand vigil for hours after a grizzly had taken one of their calves, circling, pacing, watching.  What does an elk understand of death?  Those who object to anthropomorphizing maybe have it backwards:  it’s not that elk don’t know what we know, it’s that we know far less than we credit ourselves for.

The tow truck arrives to take away the totaled pickup.  Hydraulic pumps whine, heavy steel hooks clank, and the winch draws the truck up onto the tilt bed.  We all exchange wishes for safe travels.  I reverse what I can of what I’ve done here, picking up the high-vis signs, turning off the supernova of flashing lights.  I radio dispatch that I’m clear of scene, and make my way home.
Home is where the elk was when she got hit.

The Trickster Renders Us Invisible
Lois Red Elk writes a poem about coyote that reminds how the essence of being is not material, but everything else ...
Read
Endangered Species, Public Lands, Wildlife

Whither The Mighty Wolverine?
Few in number and scattered sparsely across huge geographic areas, wolverines are still hanging on in Greater Yellowstone. But for how...
Read
Culture, Public Lands, Wildlife

Poems About Mato And The Power Of Bear Medicine
Perfect for the approaching solstice, MoJo Poet In Residence Lois Red Elk shares two works about how a great nation and a...
Read
Back to home