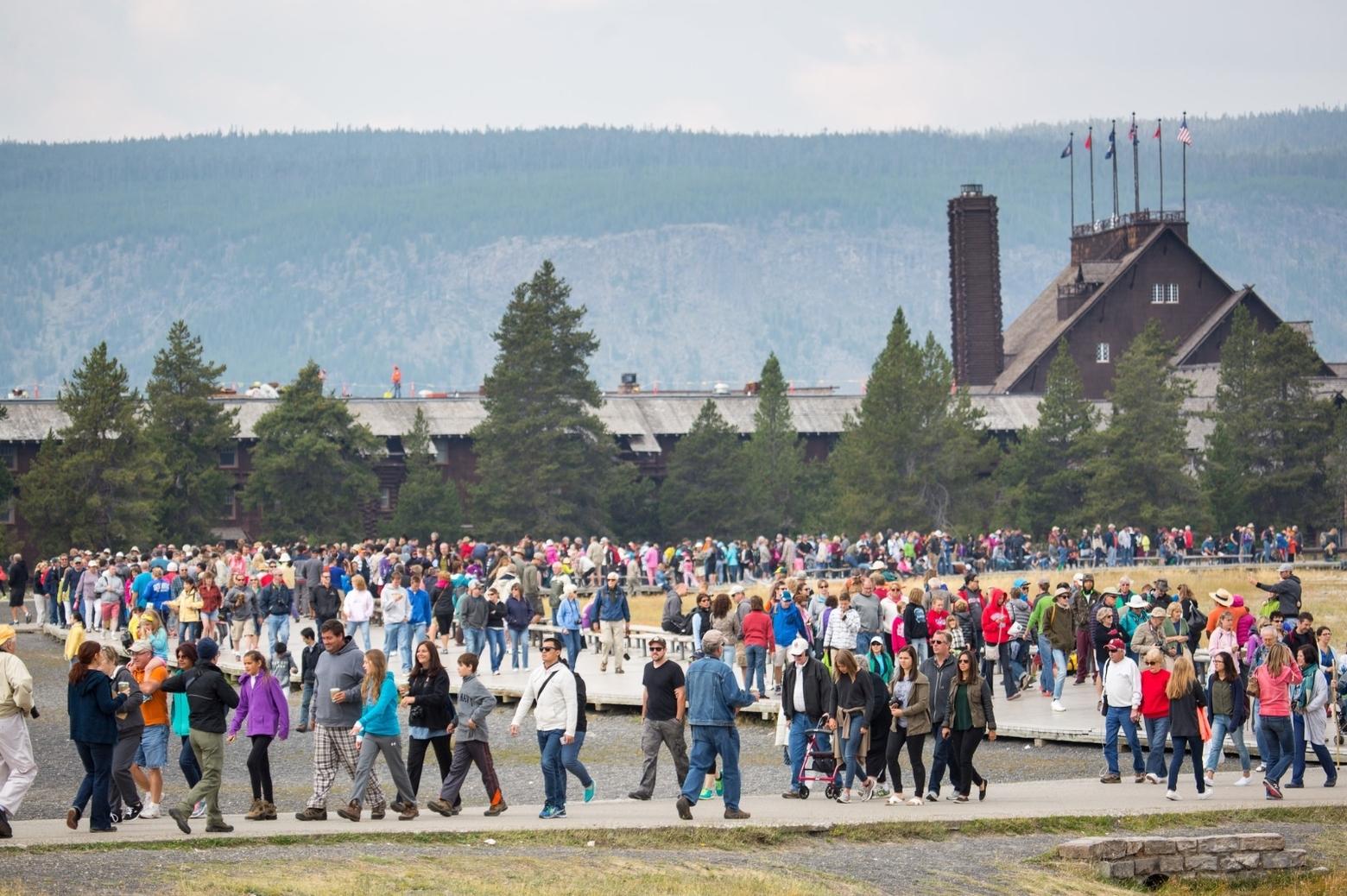 Crowds departing after watching Old Faithful Geyser erupt in Yellowstone. Photo courtesy Neal Herbert/NPS
Imagine a group of social and ecological scientists, archaeologists, environmentalists, business mavens and citizens dwelling in the year 2108. They come back from the future to study the current direction where the Greater Yellowstone Ecosystem is headed.
What observations would they make?  What advice would they offer?  If the objective is creating a Greater Yellowstone region that can withstand impacts being imposed upon it and still maintain wild character that lasts over time, would they conclude the path we are on is the right one or wrong one? 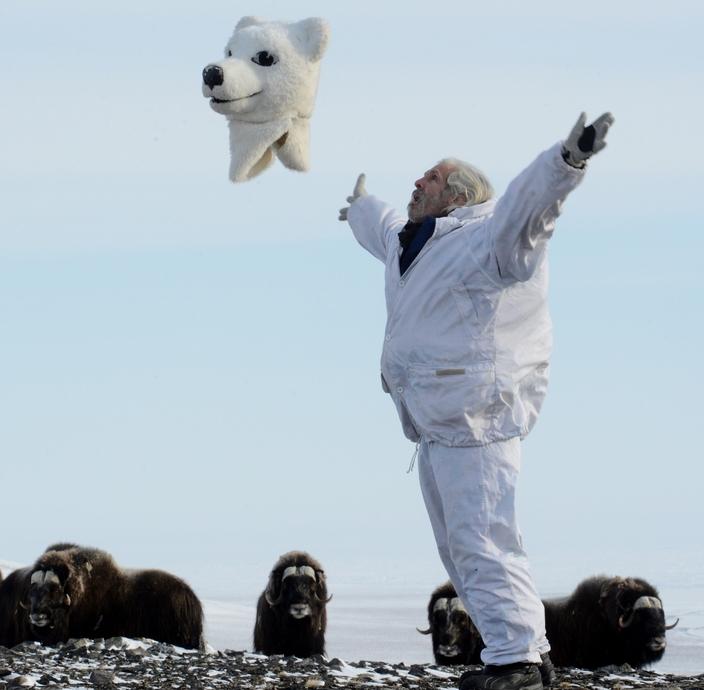 Conservation biologist Joel Berger will talk about Greater Yellowstone's novel place in the world.
The theme of the 14th Biennial Scientific Conference on the Greater Yellowstone Ecosystem, slated to run from Sept 11 to 14 at Big Sky, Montana, is titled "Tracking the Human Footprint." It just may be the most important gathering ever assembled to examine the ecosystem's biggest menace and its potential salvation: Homo sapiens. That's us. In Latin, it means "wise human."
Since the first conference was held almost three decades ago—and the second one, in 1993 trying to make sense of the historic Yellowstone forest fires of 1988—the biennial scientific confab has always tried to offer a bigger picture perspective of major issue at play in Greater Yellowstone beyond controversies featured in daily newspaper headlines. Always, the gatherings attempted to get at the deeper meaning not only of ecological forces writ large in the ecosystem, but our human relationship to them.
Is Greater Yellowstone really wild or an artificial construct of it? Do we stand apart from nature or are we immersed in ways we can't fathom?  Does the conservation model of drawing lines around protected areas and calling it good enough really work?  Is the attractiveness of Greater Yellowstone the foundation of its undoing?
Tracking the Human Footprint, hosted by the non-profit partner of Yellowstone National Park, Yellowstone Forever, features a superb lineup of experts all assembled to ponder how to save the ecosystem from humans exploiting it to death. 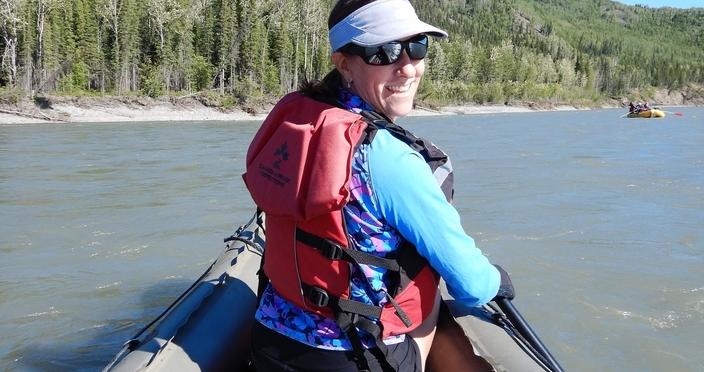 Jodi Hilty, who heads Yellowstone to Yukon Conservation Initiative, will talk about the importance maintaining Greater Yellowstone's connection to other ecosystems.
It follows on the heels of two conferences on growth in Greater Yellowstone, one hosted by the Northern Rockies Conservation Cooperative in Jackson Hole and another by FutureWest in Bozeman in 2017. Last spring, the Greater Yellowstone Coalition and Montana State University also brought people together to assess the upsides and growing impacts of outdoor recreation.
David Diamond, chief coordinator of the Greater Yellowstone Coordinating Committee (the board comprised of 12 executive-level leaders from all of the large land management agencies in the region) says the agenda for the biennial scientific conference is big and bold because the challenges are too.
In the past many of the biennial conferences have been held at Mammoth Hot Springs in Yellowstone Park, but this year its relocation to the Big Sky Ski Resort is poignant.  A community with a checkered past in dealing with growth-related issues, Big Sky is a living laboratory for assessing how human presence transforms formerly wild places. 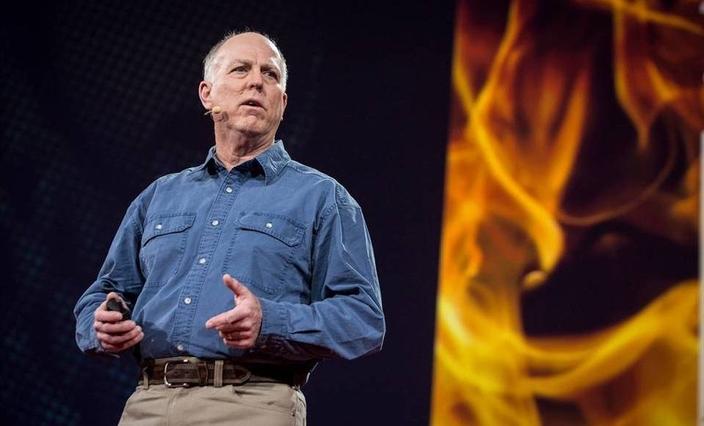 Professor Stephen Pyne will offer his perspective on wildfire in era of climate change.
The effects of Big Sky's latest  boom in real estate speculation, unprecedented and happening in the wake of the 2008-2009 Great Recession is affecting the ecological integrity of the Madison Mountains, the Gallatin River Canyon/U.S. Highway 191 corridor to the east and the Madison Valley to the west.  Notably, few conservation groups in Greater Yellowstone have applied the kind of serious scrutiny that is warranted in Big Sky.

This points to an obvious problem, especially where the long-term health of things like public wildlife and their migration routes are concerned. Despite Greater Yellowstone's huge public land base, there is only so much government agencies can do.
The health of national parks, forests, wildlife refuges and BLM lands (which comprise three-quarters of Greater Yellowstone's land mass) is inextricably linked to activities occurring on private lands adjacent to them. Similarly, many local economies are booming because of the character of pubic wildlands.
Growth can become a vicious circle in which frenzied profiteering driving real estate development in the short term can actually be to the long-term detriment of the natural environment that originally catalyzed the boom. That's where counties and cities play a crucial role in promoting wise land use planning that is both fiscally responsible and sensitive to environmental limits. 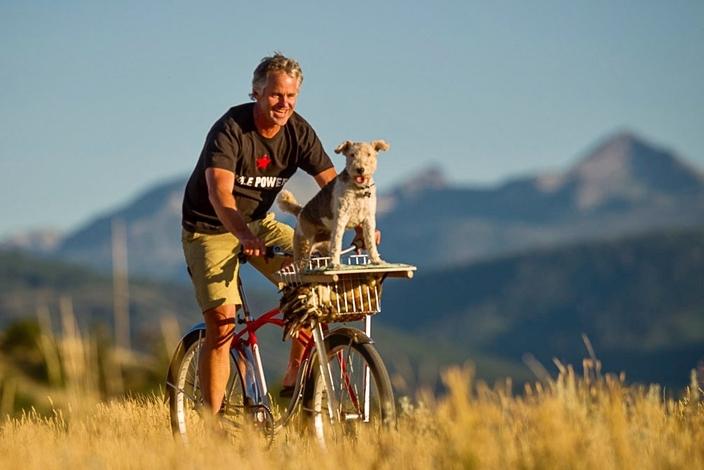 Bozeman's Ray Rasker will discuss the vital role public lands play in maintaining healthy landscapes and economies.
Diamond and colleagues who put the agenda together get all of that. Among an all-star cast of speakers, there are four headliners delivering guest lectures:  Bozeman's Dr. Ray Rasker of Headwaters Economics; Dr. Jodi Hilty, president and chief scientist of the Yellowstone to Yukon Conservation Initiative; Dr. Joel Berger, a globally renowned conservation biologist who has worked extensively on wildlife corridors; and professor Stephen Pyne, one of the world's foremost  observers on wildfire ecology.
Arguably, none of the earlier biennial scientific conferences have been as important as this one, for it is now more obvious than ever that human development combined with increasing patterns of public land use are squeezing Greater Yellowstone's functioning carrying capacity.
The agenda is chock full of intriguing panels addressing everything from the impacts of human development, recreation and climate change on wildlife to visitor use patterns, the roles of wolves and beavers on the landscape, the seemingly intractable controversy over Yellowstone bison. 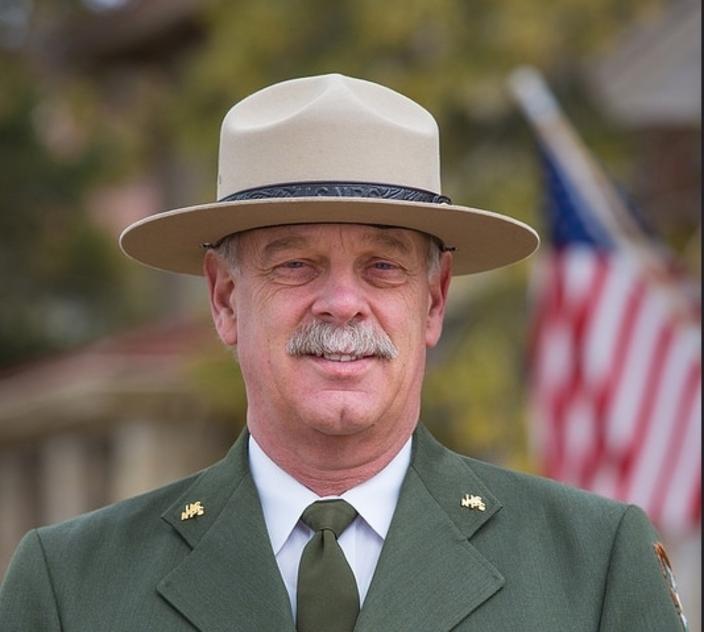 The conference represents Dan Wenk's last major appearance after 43 years with National Park Service
Another major highlight will be two appearances by Yellowstone Superintendent Dan Wenk on Thursday, Sept. 13. At 10 am, he will be  moderating a discussion with five county commissioners from around Greater Yellowstone on subjects relating to growth: conservation partnerships, vehicle-wildlife collisions, outdoor recreation and transportation.
Then, at 4 pm, he will attempt to synthesize all of the major themes and what they portend.  The science conference will be Wenk's last hurrah following a distinguished 43-year career with the National Park Service.
During his tenure as chair of the GYCC, Wenk pressed his colleagues to  become more courageously engaged on issues that transcend boundaries.  As Yellowstone's former science chief David Hallac, who worked under Wenk, said before leaving to take a park superintendent position Southeastern US: "I fear that we could lose this place. My fear is not only the death of the ecosystem by 1,000 cuts.  The fabric of the ecosystem's wild mosaic is being eroded by 10,000 scratches, some that are obvious and discernible, others that are more subtle yet insidious and maybe even more severe."
On that point, Dr. Andy Hansen, ecology professor at Montana State University, will present the first-ever vital signs report on the state of Greater Yellowstone's environment.  This, along with any one of the dozen major panel sessions, held over three days, would make for its own conference.
For more information on how to register or to see the agenda, click here. 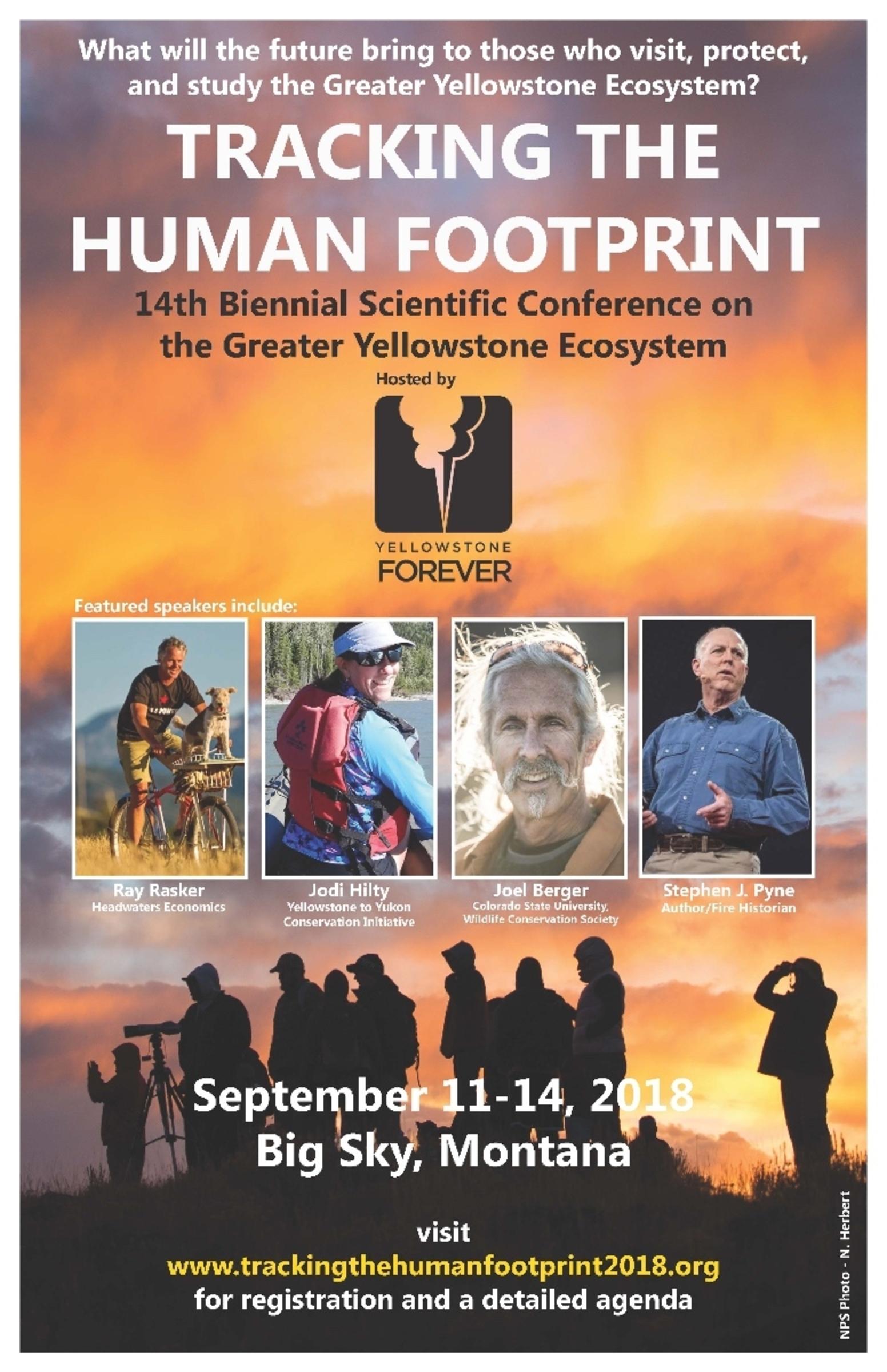 The Power Of Words: How We Use Language To Justify Our Consumption Of Nature
MoJo columnist Susan Marsh waxes on how we 'harvest' living things to avoid admitting we're taking their lives
Read
Grizzly Bears, Hunting, Wildlife