How is industrial-strength outdoor recreation and amenity development better than the resource extraction it is replacing? 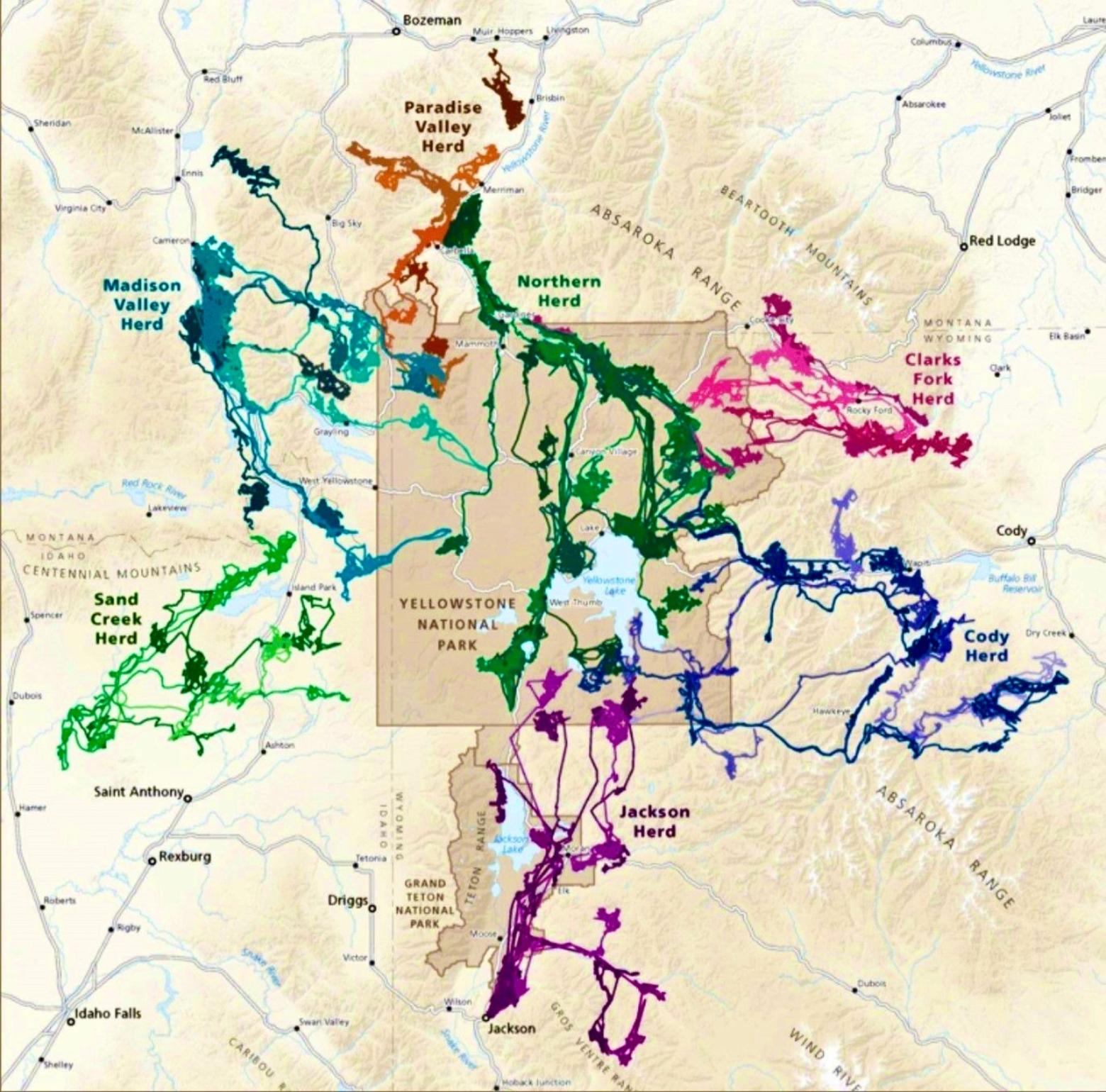 This map showing the remarkable long-distance migrations of a dozen different elk herds in Greater Yellowstone speaks to one of the main reasons why this ecosystem is unparalleled in the Lower 48 and iconic in the world. The corridors for elk, mule deer and pronghorn only still exist here because they remain unfragmented by human development or inundated by large numbers of people using the landscape. Can they persevere given development trends and outdoor recreation reaching industrial-strength levels? Photo courtesy Wyoming Migration Initiative
For 30 years, Ray Rasker has been on the leading edge of thinking about this amorphous thing we call “the New West” which, in obvious ways, is very different from both the natural resource extraction-based “Old West” and certainly from the indigenous “Old Old West” whose presence remains after 12,000 years.
Early on, Rasker astutely identified that places like Bozeman, Jackson Hole and more recently, Big Sky, had economies driven not by how many board feet of trees were cut from national forests, cattle run on the range, or fossil fuels and minerals pulled out of the ground; instead, these New West centers benefitted from an increasingly-mobile workforce settling in such places based upon lifestyle considerations most enjoyed by the economic elite.
“Footloose” entrepreneurs, Rasker noted, were one subset of a still-ongoing economic boom.  Another were Baby Boomers and older (mostly white) folk able to exist on investment income. A third factor involved an emerging “service” sector not comprised solely of cheap minimum wage jobs in tourism but also health care providers, technology gurus and swelling non-profits.

A fourth, but not cited enough, is the construction and speculative real-estate industry which really functions no differently than mining boomtowns of old exhausting resources—in our case a finite amount of private land and its corresponding aesthetic sense of place. 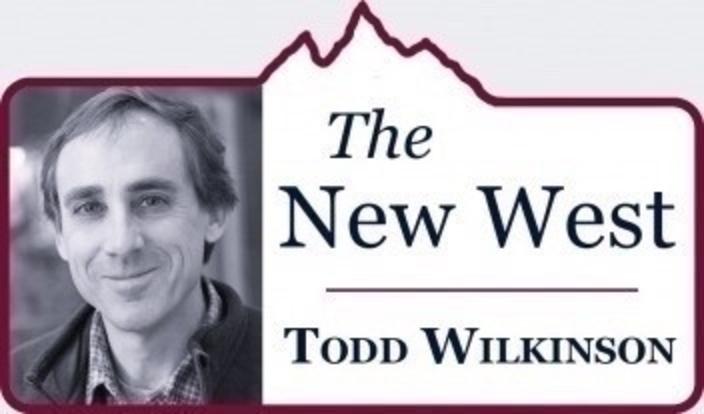 Some businesspeople, like K.C. Walsh of Simms fishing waders (founded by John Simms in Jackson Hole) pulled up stakes in Los Angeles, bought the company and grew it in Greater Yellowstone. There are actually many similar manufacturers that attract quality employees who are drawn to living closer to public wildlands.

This factor has figured prominently in Rasker’s more recent research—analysis that has elevated the Bozeman-based firm he founded, Headwaters Economics, to a national stage. Headwaters is renowned for innovatively creating databases that allow, for example, residents of every county in the West to better understand the forces at work in their local economies.

Headwaters has been at the forefront of examining the rising costs of Forest Service firefighting efforts and the problem that half of the agency’s multi-billion budget is exhausted trying to save private homes unwisely built in the wildland-urban interface that has a higher probability of burning.
And Headwaters has noted, based on analysis, that in a region like Greater Yellowstone, for every 100,000 acres of public land that are preserved in a high-quality condition, it translates into a $4360 increase in per capita income.

For journalists like me, who have been writing about Greater Yellowstone for more than 30 years, Headwaters has been a valuable “go-to” resource. And recently, the outfit updated an earlier analysis showing that as people continue to pour into Bozeman/Gallatin Valley—the fastest growing micropolitan urban area in America—southwest Montana is rapidly losing open space. But what is the non-economic consequences of that?

Here’s my criticism of Headwaters and it’s also aimed squarely at most conservation organizations, agencies like the Forest Service, every county and all of the high-growth communities in Greater Yellowstone. As many tout the economic prosperity of inward population growth and continue to push outdoor recreation, none are seriously addressing the transformative ecological impacts of more people using the landscape.

As many tout the economic prosperity of inward population growth and continue to push outdoor recreation, none are seriously addressing the transformative ecological impacts of more people using the landscape.

All of us love to play in the outdoors. It’s why most of us live here. It’s why we are more physically fit and healthier than the national average of most Americans. It’s the foundation for many businesses and job creators. And the overwhelming whiteness of the region’s public land users is one reason why it is a target for questioning the motives of the conservation movement.

What’s been lost in the latter, however, is recognition of what makes Greater Yellowstone unparalleled and which is part of a legacy belonging to all Americans—the ecosystem's still-healthy populations of wildlife. The vital cornerstone of perpetuating the persistence of those animals is protecting habitat.

Amid all the cheerleading to create more access to the backcountry, building more trails, filling the rivers with more boaters, monetizing visitors every way possible and having state tourism bureaus spending many millions annually in advertising to promote our public lands, many of which are already crowded, few are reflecting on the ecological toll being exacted.
There is not a single conservation organization in Bozeman, Montana—home to one of the highest per capita concentrations of paid professional conservationists in America—seriously devoted to dealing with growth-related ecological issues on private lands in the city and county. Not one. That isn't happening in most of Greater Yellowstone's 20 counties, in fact.
In parallel, how is the blind promotion of more outdoor recreation on public lands, without knowing the cumulative effects, any different from the colonizing, destructive forces of Manifest Destiny? I can provide readers with a list of prominent conservation funders who, for whatever reason, have been unwilling or resistant to discuss what many are calling the rise of “the outdoor recreation industrial complex”—a form of conspicuous consumption based on landscape use that is as impactful as traditional resource extraction and likely more permanent.
You want some examples? How long do you want the list to be?
Covid-19 is revealing many now-visible horrors of outdoor places becoming deluged with a flood of people on public lands that exceeds the carrying capacity of those places. State and national parks are short staffed, their employees stressed out and overwhelmed dealing with unruly visitors and natural resource abuse—all of this related to outdoor recreation and the downside of nature tourism. It is a startling glimpse into our fast-approaching future.

Covid-19 is revealing many now-visible horrors of outdoor places becoming deluged with a flood of people on public lands that exceeds the carrying capacity of those places. State and national parks are short staffed, their employees stressed out and overwhelmed dealing with natural resource abuse—all of this related to outdoor recreation and the downside of nature tourism. It is a startling glimpse into our fast-approaching future.

Few conservation organizations are willing to discuss limits and the virtue of emphasizing quality experiences that protect wildlife and natural values against their over-exploitation. Mountain Journal is assuming a watchdog role in applying scrutiny to trends on both public and private lands that many conservation groups ought to be, but aren't.
If such organizations, government agencies, elected community leaders, and philanthropic funders are truly interested in saving the last best wildest ecosystem in the Lower 48—as gauged by its unmatched wildlife and its corresponding sense of place—they need to engage now.

The nature of Greater Yellowstone will not be saved based on the unchallenged belief that the more people who use (exploit) a resource the better for its wellbeing.  Saying that is not being elitist nor is it being exclusionary to people of color—to whom the public lands of Greater Yellowstone belong equally.

This, after all, is about understanding the destructive patterns of human population in general, of why and how most once-wilder places in America have been loved to death mostly by white people. Recreationists who reject wildlife conservation—and the environmental organizations now enabling that attitude—need to acknowledge their own role in creating a huge new New West problem.
The first major step necessary for getting at a possible solution, if there can be one, is consciously acknowledging that the problem exists.