The body of Grizzly 394, a 25-year-old male, attracted lots of human photo ops in Gardiner but now is a criminal case after someone removed its head and claws, officials say 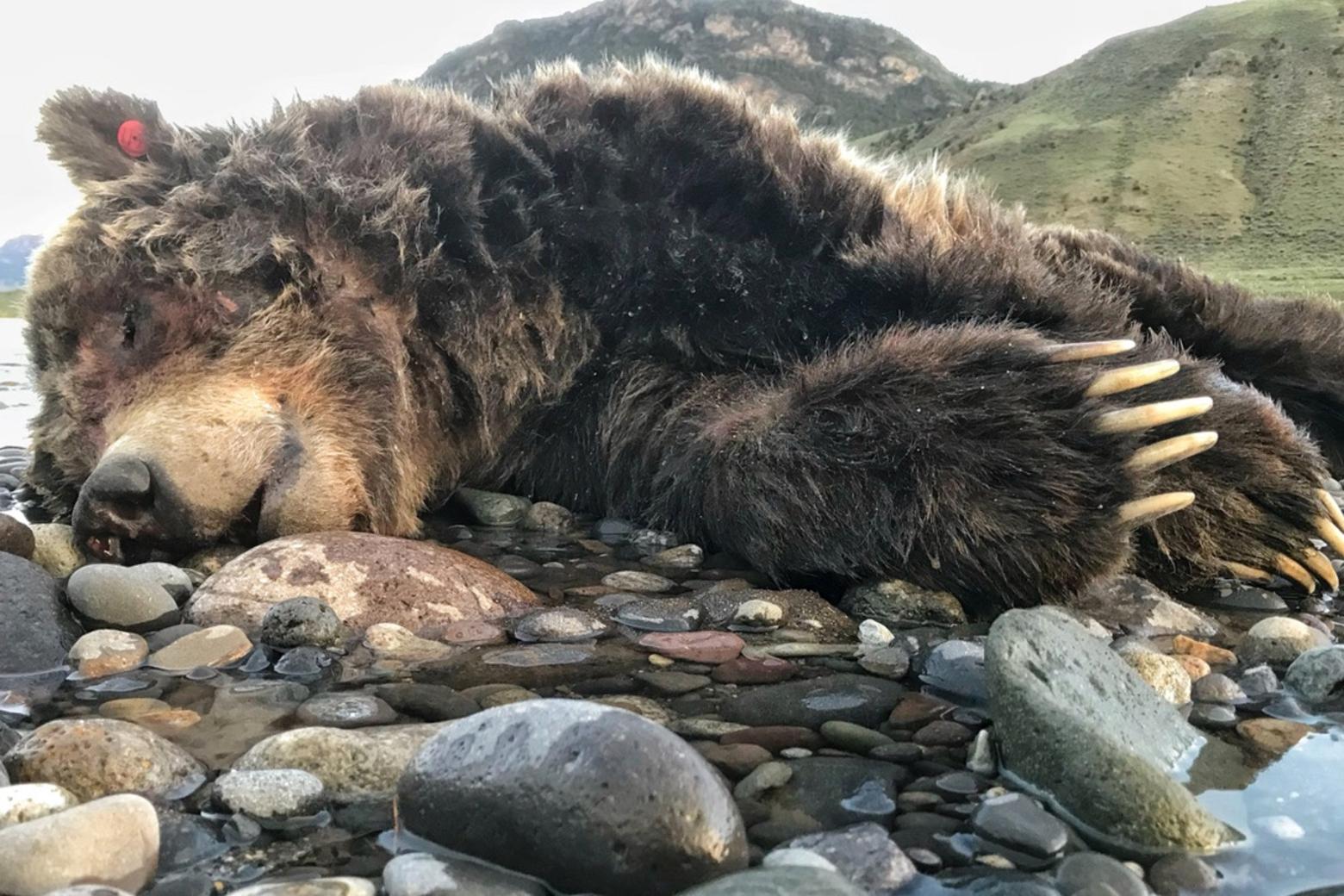 Photo of Grizzly 394 courtesy George Bumann
by Todd Wilkinson
An old dead grizzly bear that attracted photo opportunities for rafters floating the Yellowstone River just north of Yellowstone National Park has now become the subject of a criminal investigation after both the bruin’s head and claw-filled paws were removed from its body.

Kevin Frey, senior grizzly specialist with Montana Fish Wildlife and Parks, told Mountain Journal the US Fish and Wildlife Service is taking a lead role in the case because removing parts from a federally-protected animal is a violation of the Endangered Species Act and punishable potentially by fines and jail time.
“I understand the desire someone might have to take the head and claws as souvenirs, but what they did—whether they realize it or not— is a serious matter and it’s against the law,” Frey said. “It makes no difference if a person poaches a bear to kill it or to take its hide and claws as trophies or comes upon a dead grizzly and decides to help themselves to the parts. Grizzlies are a federally protected species and it’s illegal.”
Transporting grizzly parts across state lines is also a violation of the federal Lacey Act, a law that first came on the books as a result of a bison poaching case in Yellowstone more than a century ago.

Apart from the latest poaching intrigue, the sudden appearance of the grizzly carcass in June set off a buzz of public attention in and around Gardiner, Montana, a Yellowstone Park gateway community and Yellowstone River town. It started after the 25-year-old bruin’s hulking body was spotted at the edge of the river and could even be seen from houses above.

As avid speculation ensued among locals about the potential cause of the bear’s demise, including people who posted their theories on social media, the dead male griz also became a magnet for humans wanting to pose with it.
“It’s kind of amazing to me how popular the dead bear was,” said Kerry Gunther, Yellowstone Park’s chief bear management specialist who has spent three decades studying grizzlies and lives in Gardiner. “Every raft guide in town going down the river probably stopped. People who were rafting would stop and hold the bear up and get a picture. It was quite the tourist attraction. I would bet that half the town of Gardiner went out and looked at it.”

“It’s kind of amazing to me how popular the dead bear was. Every raft guide in town going down the river probably stopped. People who were rafting would stop and hold the bear up and get a picture. It was quite the tourist attraction. I would bet that half the town of Gardiner went out and looked at it.” —Yellowstone chief grizzly bear manager Kerry Gunther

Gunther did not venture down to the river to inspect the bear but he did see it from Highway 89 and he photos taken which showed it had an ear tag.  According to Frey, the state had planned to remove the animal either via helicopter or by boat but by the time arrangements could be made for transport someone had already gotten to the grizzly and severed its head and claws.
The bear, who had been given the numeric ID 394, had for years been part of ongoing grizzly research efforts carried out by Yellowstone Park, other agencies and the USGS’s interagency grizzly bear study team.  In reviewing 394’s file, Gunther said the bear had a home range that encompassed Hayden Valley in the center of the park but, like many male grizzlies, ranged widely.
Looking back at significant events in the bear’s life, Gunther highlighted several points of intrigue. Grizzly 394 had been caught four different times by bear managers in 2011, as park officials attempted to capture a grizzly that killed  59-year-old John Wallace from Michigan. In August of that year Wallace was fatally mauled while he hiked alone along Mary Mountain Trail in Yellowstone’s Hayden Valley.

Grizzly 394 had been caught four different times by bear managers in 2011, as park officials attempted to capture a grizzly that killed  59-year-old John Wallace from Michigan. In August of that year Wallace was fatally mauled while he hiked alone along Mary Mountain Trail in Yellowstone’s Hayden Valley.

Grizzly 394 was not implicated in the fatal attack, Gunther said, though he was among several different bears that were in the area following Wallace’s death, some of which may have fed on the hiker’s body—this according to details presented in a federal report that investigated the incident.
A decade prior, as a five year old, 394 roamed Yellowstone but headed south.  “The interesting thing is he was involved in sheep depredations on the Bridger-Teton National Forest in 2001,” Gunther said. “He was trapped and relocated and then stayed out of trouble the rest of his life.” Gunther added that the sheep depredations happened near Klondike Creek in the Upper Green River drainage and the bear was transported to Mormon Creek between Yellowstone’s East Entrance and Cody, Wyoming on the Shoshone National Forest. After that, 394 headed back to familiar terrain in Yellowstone.
It’s not clear how 394 died and the cause may never be known. Gardiner-based naturalist and wildlife artist George Bumann had taken photos of the bear, posted them on Facebook, and speculated that 394 might have died following a violent scrape with another male grizzly.  His musing was published at Mountain Journal and can be read by clicking here.
Both Frey and Gunther said there is no overt evidence to support the theory of 394 being killed by another bruin though Frey said the animal did have slight non-fatal facial wounds consistent with coming in contact with another bear.
As far as 394 being called, by some, “a Hayden Valley bear,” Gunther noted:  “It’s not that far a stretch to have a bear associated with Hayden Valley turn up in places a long ways away like the northern end of the park,” Gunther said. “We have males [bears] that use Lamar Valley and have gone all the way out [more than 100 miles] to the Centennial Valley in far southwest Montana.”
Frey and Gunther say it is entirely possible 394 might have died trying to ford the Yellowstone River and was drowned.  “What we do know is his teeth were bad, which isn’t uncommon for a grizzly that old,” Frey said, noting that photos confirmed both worn down or chipped molars and canid teeth.  Both bear experts further noted that while 394 weighed 500 pounds in his prime, his muscle mass and physical appearance was in obvious decline.
Frey cited a handful of incidents in which poachers in Montana have killed grizzlies and removed their capes, heads and claws. However, Gunther noted, “In my career we’ve never had a grizzly poached in the park that we’ve found.
How uncommon is it for a male bear to reach a quarter century old? “Inside Yellowstone it’s not that unusual,” Gunther said, noting that the oldest bear documented in the park was 31. “Outside the park where there are so many more things and ways that bears can get into trouble, reach that age is probably more rare.”
Frey encourages those with information about the removal of 394’s head and claws to call 1-800-TIP-MONT (800-847-6668). He said tipsters can remain anonymous and be eligible for a reward.
EDITOR'S NOTE:  Make sure you never miss a MoJo story by signing up for our free weekly newsletter. Click here: https://bit.ly/3cYVBtK