Interior Secretary Deb Haaland Speaks Up On Wolves, But Is It Enough?

Tribes, conservation groups, even former Fish and Wildlife Service director say she should emergency re-list wolves with federal protection. Why does she balk? 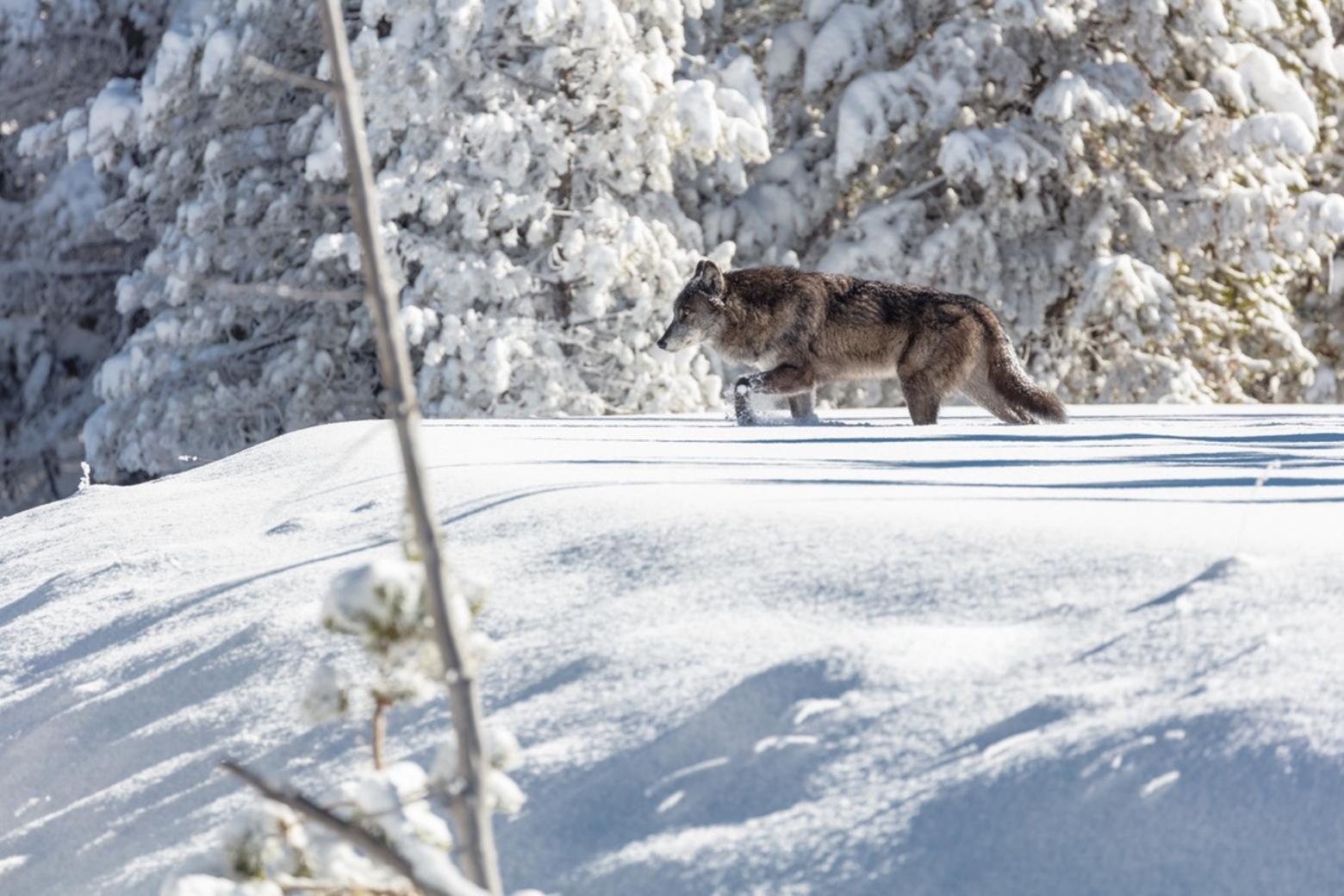 A gray wolf in Yellowstone National Park where wolf watching is not only one of the most popular tourist activities but it generates tens of millions annually for the regional economy. Many are puzzled why Interior Secretary Deb Haaland did not intervene to safeguard Yellowstone wolves killed when they crossed the park boundary—especially since the justification given by Montana Gov. Greg Gianforte, that wolves are decimating elk and livestock, has been proved to be grossly false. In the winter of 2021, Gianforte himself shot a Yellowstone research wolf that had wandered north of the park and got caught in a trap. Photo courtesy Jacob W. Frank/NPS
EDITOR'S NOTE: Citizens, tribes and conservation organizations say it's been a brutal 12 months for wolves in the West and Wisconsin. In Montana, on the border of Yellowstone National Park, an entire pack has been eliminated by controversial hunting and trapping that has targeting wolves leaving the park. Roughly one of every five Yellowstone wolves alive at the end of last summer is now dead. On Feb. 7, 2022, Interior Secretary Deb Haaland penned this public op-ed below as a statement which appeared in USA Today but wolf advocates say she needs to use her executive authority and place wolves back under federal protection to stop the killing in Western states and assess how new state laws comport, or not, with the goals of biological recovery. Earlier, Western governors, namely Montana Gov. Greg Gianforte, ignored calls from a large number of citizens and letters from Yellowstone Supt. Cam Sholly to halt the killing. The National Park Service is an agency that falls under the command of Haaland. Yellowstone turns 150 years old on March 1, 2022 and wolf reintroduction/recovery has been called one of the greatest American conservation success stories yet by refusing to intervene critics say she has enabled wolf recovery to be set back.
by Interior Secretary Deb Haaland
Since time immemorial, wolves have lived alongside Indigenous peoples and have represented the virtues of healing, strength and familial protection. In many tribes, they are honored in traditional ceremonies and revered in storytelling.
Even today, I feel the embrace of my ancestors reminding me why our nonhuman relatives deserve respect – because the creator put them here to live.
For centuries, wolves have been exploited for their furs, killed in the name of protecting people, livestock and game species and nearly eliminated through government-sponsored actions. Decades of hard work by states, tribes and stakeholders on the ground, along with federal protections, successfully recovered gray wolves after two centuries of decline to the brink of extinction.
As secretary of the Interior, I am committed to ensuring that wolves have the conservation they need to survive and thrive in the wild based on science and law. I am also committed to keeping communities safe and reducing wolf conflicts with ranchers. It is critical that we all recognize that our nation’s wolf populations are integral to the health of fragile ecosystems and hold significant cultural importance in our shared heritage.
Jeopardizing gray wolf recovery
We are alarmed by recent reports from Montana, where so far this season nearly 20 gray wolves that set foot outside of Yellowstone National Park have been killed. This happened because the state recently removed longstanding rules in areas adjacent to the park, which were effective in protecting Yellowstone wolves that do not recognize boundary lines on a map.
We have communicated to state officials that these kinds of actions jeopardize the decades of federal and state partnerships that successfully recovered gray wolves in the northern Rockies.
The law requires that states uphold reserved tribal treaty rights. Therefore, in the case of the Ojibwe Tribes in Wisconsin, the Interior Department formally requested that the state consult and coordinate with the tribes when making wolf management decisions and respect the tribes’ right to conserve rather than kill wolves. We will take similar actions on behalf of other tribes where necessary.

"My Pueblo ancestors taught me to live with courage, respect our ecosystems and protect our families – the very same virtues that wolves embody."  —Interior Secretary Deb Haaland

Finally, the U.S. Fish and Wildlife Service has authority under the Endangered Species Act to protect threatened and endangered species. Thanks in large part to this bedrock environmental law, gray wolves recovered from near extinction to current numbers that exceeded expectations. Because of the gray wolf’s recovery, individual states are responsible for its welfare and sustaining that recovery. Nevertheless, we will reinstate federal protections under the ESA for the northern Rocky Mountains' gray wolf, if necessary.
Next steps for the gray wolf:
The Fish and Wildlife Service is evaluating whether a re-listing of the northern Rocky Mountains' gray wolf population under the Endangered Species Act is necessary.
Recent laws passed in some Western states undermine state wildlife managers by promoting precipitous reductions in wolf populations, such as removing bag limits, baiting, snaring, night hunting and pursuit by dogs— the same kind of practices that nearly wiped out wolves during the last century. In response, last September the Fish and Wildlife Service began a 12-month analysis to determine, guided by science and the law, whether reinstating ESA protections is warranted.
We also have the ability to act swiftly to protect gray wolves if science indicates that there is an emergency posing a significant risk to the well-being of the species. In such an emergency, the Fish and Wildlife Service can immediately list the species for 240 days. We are closely monitoring data on wolf populations and will make those determinations if merited using the best available science.
Gray wolf recovery has been an American conservation success story. The continued recovery of gray wolves depends on the cooperation of wildlife managers at the state, tribal and federal levels, and a reliance on the best available science to guide management decisions. The clock is ticking. We must find solutions that allow wolves to flourish, even while we balance the needs of hunters and ranchers and others who live and work along with wolves on the landscape.
My Pueblo ancestors taught me to live with courage, respect our ecosystems and protect our families – the very same virtues that wolves embody. From our public lands to our vast oceans, and all the creatures that live within them, I will continue to work hard for our nation’s wildlife and its habitats, because we were meant to all coexist on this earth – the only place we all call home.
NOTE: For additional reading:
Montana Defiantly Puts Yellowstone Wolves In Its Crosshairs: In unprecedented move, new hunting and trapping regulations would allow every wolf coming into state from America's first national park to be killed as a trophy by Todd Wilkinson in Mountain Journal

Opinion: Cruelty toward wolves is erasing conservation efforts. It’s time to reinstate their protections by former US Fish and Wildlife Service Director Dan Ashe in The Washington Post
Montana Wolf Policies Are Destroying State's Reputation As Beacon For Wildlife Management by several former members of the Montana Fish and Wildlife Commission, all of whom are hunters and some are biologists. One of them is Gary Wolfe, former CEO of the Rocky Mountain Elk Foundation
What Is Wilderness Without Its Wolves? by Dr. Franz Camenzind, a conservation biologist who has studied wild canids and made award-winning wildlife films
What 'Modern Wolf Management' Looks Like In The Northern Rockies, a cartoon by John Potter
A Yellowstone Wolf-Watching Guide Wonders Aloud: What Century Are We Living In? by Phil Knight
25 Years Of Re-living With Wolves In Yellowstone by Norm Bishop 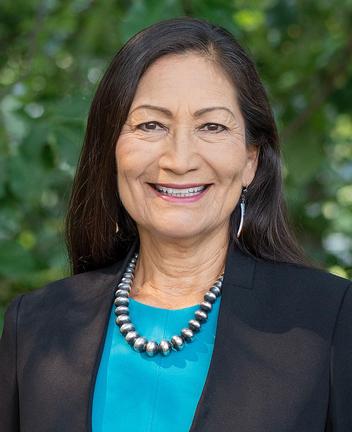 Deb Haaland is an American politician serving as the 54th US Secretary of the Interior. A member of the Democratic Party and enrolled member of the Laguna Pueblo, she served as chair of the New Mexico Democratic Party from 2015 to 2017 and as the U.S. representative for New Mexico's 1st congressional district from 2019 to 2021. She is the first Native American to serve as interior secretary.