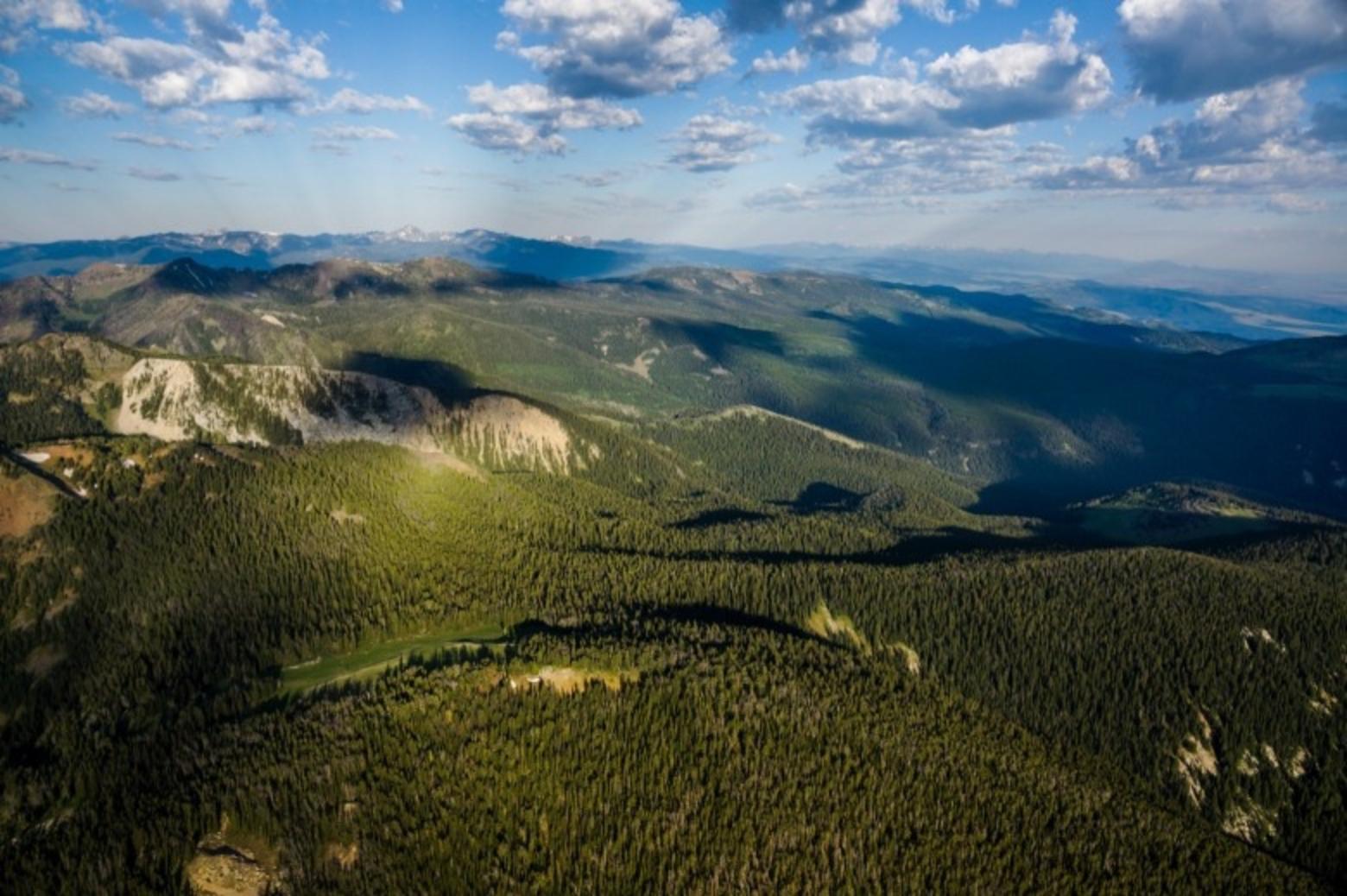 By Hilary Eisen, Adam Oliver, Dane Rider, Barb Cestero, Darcie Warden and Emily Cleveland
Home to grizzly bears, native trout, wolverines, and a host of other wildlife that have been here since at least the Pleistocene, the Gallatin Range contains the largest roadless area connected to Yellowstone National Park, making it critical habitat and an important corridor for migrating animals.
The unique ecological significance of this area makes this range a top priority for conservation, as does the drinking water it provides Bozeman and the outdoor opportunities it offers to a local population that is growing by leaps and bounds. We revel in the landscape’s immense solitude and agree that something irreplaceable will be lost if it is given up to development. The Gallatin Range should always be wild, vast, free, and not bent to the will of humanity.
On this, advocates for the Gallatin Range all agree.
Of course, when it comes to protecting these values, the devil is in the details.
Many recreation groups have longstanding histories in the Gallatins, a reality that makes protecting the range extremely complex and challenging, given that the US Forest Service almost certainly will not upend that history.
Motorized recreation, in particular, has been occurring in the Gallatin Range for decades. The Big Sky Snowmobile Trail, a National Recreation Trail in Porcupine Buffalo Horn, has existed since the 1960s.
In 1977, Congress passed the first legislation protecting the Gallatin Range, designating 151,000 acres in the heart of the range as the Hyalite Porcupine Buffalo Horn Wilderness Study Area (WSA) and recognizing the wilderness character of the Gallatins. This law, however, did not close the Gallatin Range to existing motorized recreation.
People continued to snowmobile and ride dirt bikes in parts of the range after 1977. Mountain bikers were allowed to ride most Gallatin Range trails until the Forest Service adopted a new travel management plan in 2006. 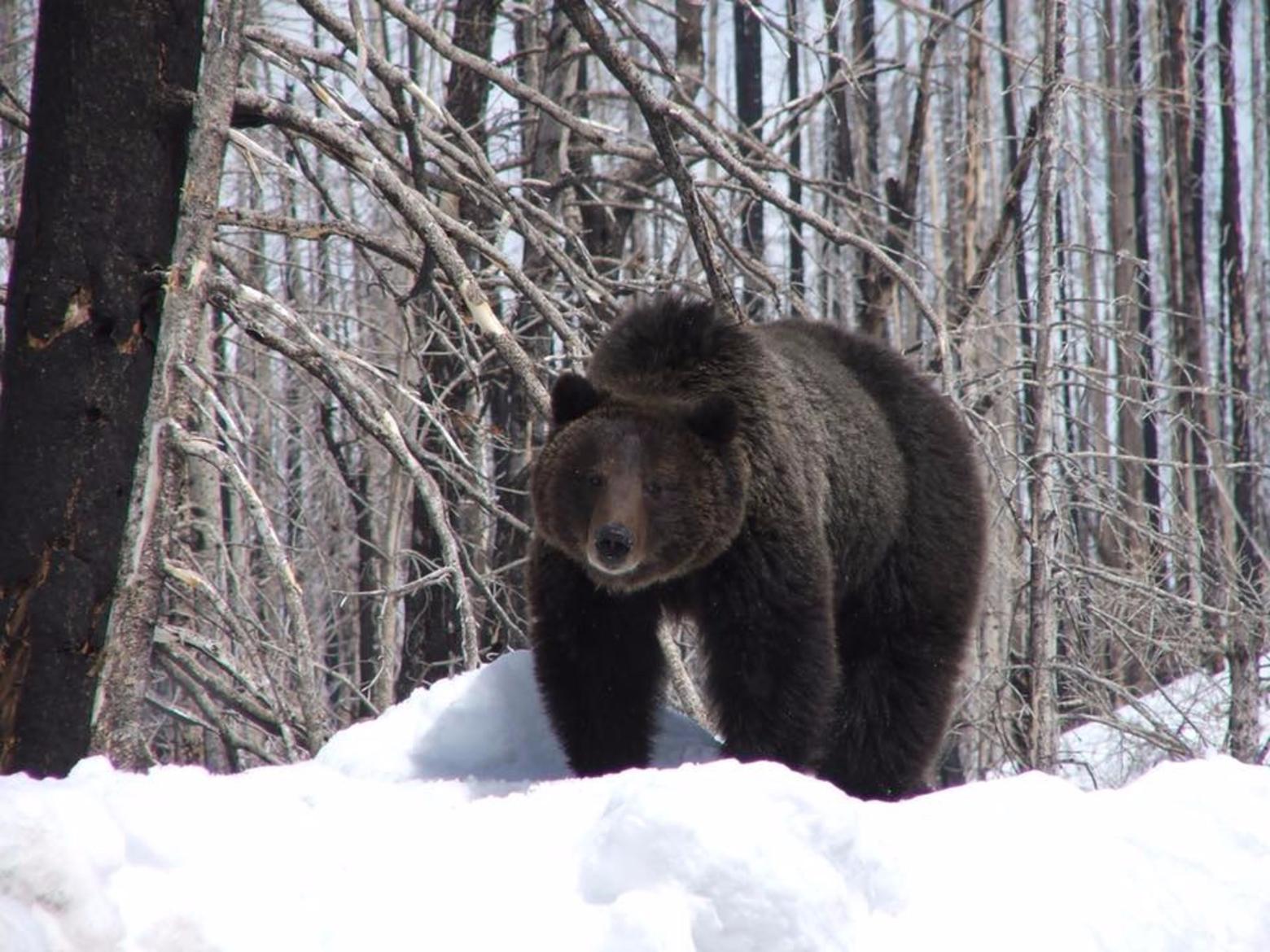 The Gallatin Mountains are part of the primary conservation area for grizzly bears. In fact, the Custer-Gallatin National Forest amended its forest management plan, guaranteeing that it would protect bear habitat to the highest standards as part of the push by federal and state agencies to delist Greater Yellowstone grizzlies from protection under the Endangered Species Act. Photo courtesy Custer Gallatin National Forest.
Through the years, there have been many attempts to designate the Gallatin Range as wilderness. The Montana Wilderness Act of 1988 got the furthest, passing both houses of Congress only to be pocket-vetoed by President Reagan.
This bill proposed 64,000 acres of wilderness in the Gallatin Range, created a recreation area in Hyalite, and designated a wilderness study area in the southern Porcupine Buffalo Horn to study existing recreational use and conflict.
Over the next three decades, population growth in neighboring towns combined with a lack of enforcement [by the Forest Service] and more powerful machines led to more people riding snowmobiles, motorcycles and mountain bikes further into the Gallatin backcountry, slowly eroding the range’s wilderness character.

Over the next three decades, population growth in neighboring towns combined with a lack of enforcement [by the Forest Service] and more powerful machines led to more people riding snowmobiles, motorcycles and mountain bikes further into the Gallatin backcountry, slowly eroding the range’s wilderness character.

This is the context in which the Gallatin Forest Partnership formed.
Volunteers who ski, mountain bike, hike, and horseback ride throughout these mountains spent countless hours working together to create a shared vision and management recommendations for the Gallatin and Madison Ranges.
Our proposal was presented to Custer Gallatin National Forest officials for consideration during the Forest’s management planning process and will hopefully form the basis for future legislation to replace the WSA designation with permanent conservation protections. 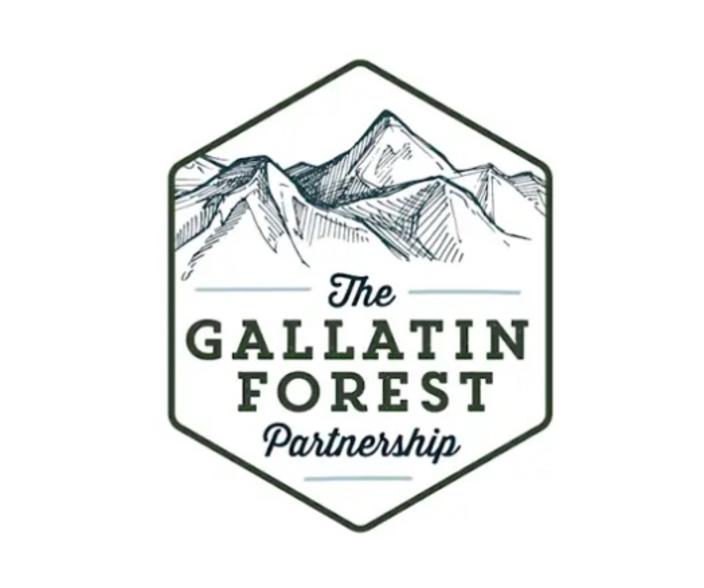 The Partnership’s agreement will permanently protect the entire Hyalite Porcupine Buffalo Horn Wilderness Study Area and surrounding roadless areas. It calls for more than 100,000 acres of new wilderness in the Gallatin Range and 22,000 acres of new wilderness in the Madison Range, which is roughly double the wilderness acreage included in the 1988 wilderness bill—more than has ever been advanced in legislation for the Gallatins before.
The agreement also proposes 125,000 acres of other conservation protections in the Gallatins to secure wildlife habitat, clean water, and the inimitable wild character of the area.
When adopted, the agreement will prohibit development and new road building in all designated areas while limiting new trail development to front country areas. By limiting future development, the agreement prevents habitat fragmentation and protects important wildlife corridors for animals moving beyond Yellowstone.
The Partnership’s agreement also addresses the potential impacts of increasing recreational use across the landscape by preventing the expansion of motorized recreation and recommending seasonal closures to all forms of recreation during sensitive times for wildlife. 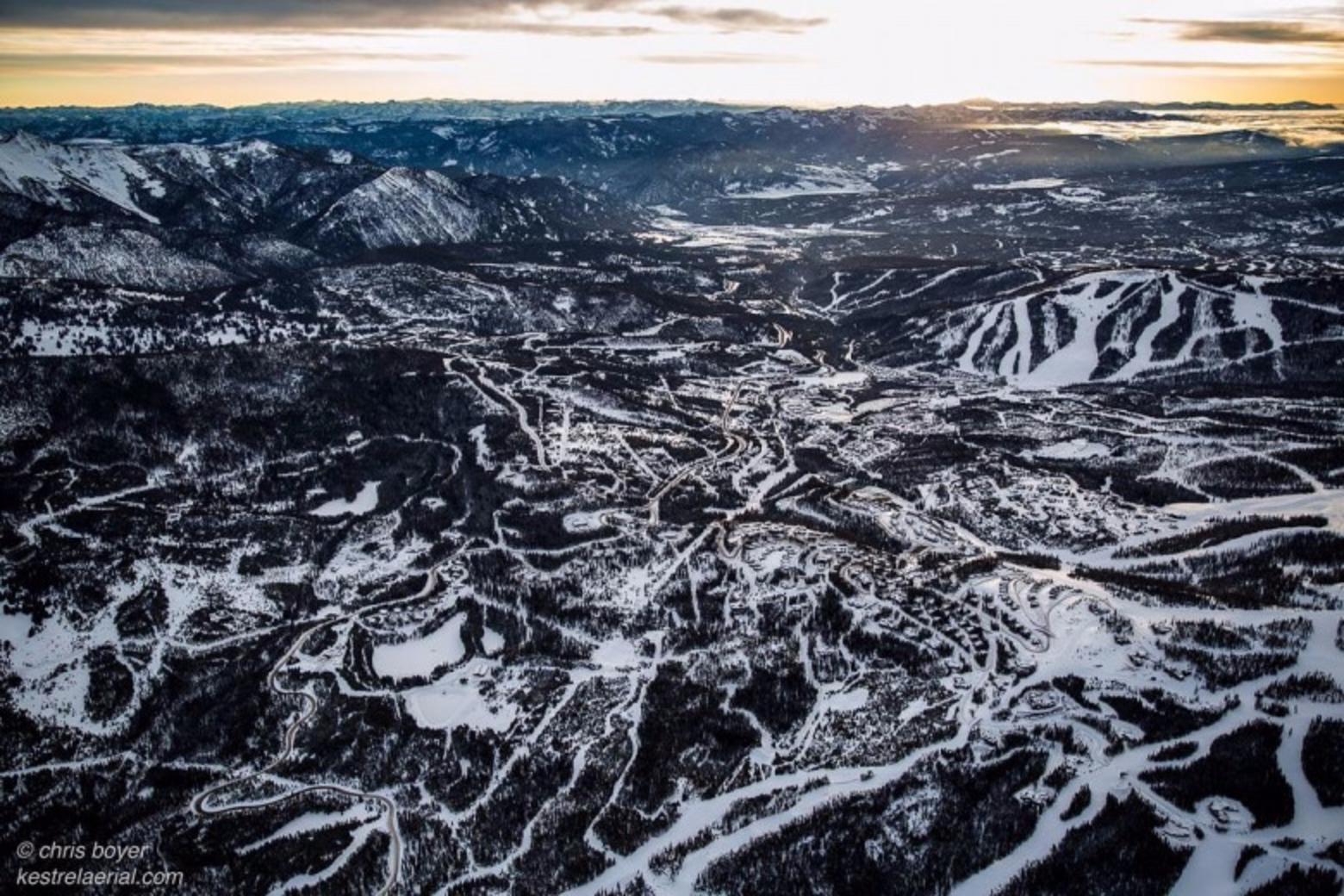 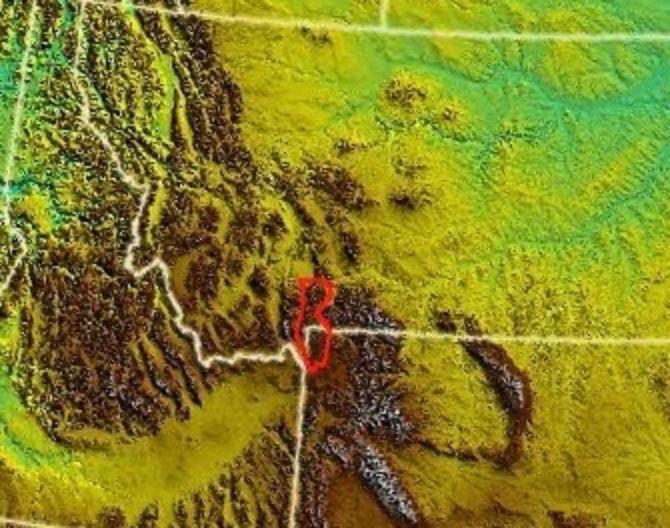 The Gallatin Range, marked in red, runs from Yellowstone National Park northward to Bozeman. It is the only major mountain range flanking Yellowstone without significant wilderness protection. The range is coming under increasing human pressure not only from Bozeman but Big Sky where displacement of wildlife between Lone Mountain in the Madison Range and US Highway 191, located at the foot of the Gallatins, has been dramatic. See top aerial photo of Big Sky taken by photographer Chris Boyer of Kestrel Aerial (kestrelaerial.com) which shows the human footprint and habitat fragmentation that has already occurred. Big Sky is a major staging area for recreation in the Gallatins.
In the southern part of the Gallatin Range—the Porcupine Buffalo Horn area—where existing heavy recreation use has produced a confusing network of braided, eroding user created trails, the Partnership’s agreement proposes to address this issue to benefit both wildlife and recreation.
Finally, the agreement identifies the need for increased investment in data collection and monitoring so we can better understand the impact recreation may be having on wildlife and adjust our management accordingly. The proposal is supported by a broad spectrum of local organizations, businesses, elected officials, and individuals.

Sunrise comes to Bozeman and the rapidly growing Gallatin Valley with the Gallatin Mountains rising in the distance south of one of America's fastest-growing micropolitan cities. Photo courtesy Mike Cline/Wikipedia/https://creativecommons.org/licenses/by-sa/4.0
Because we have chosen to acknowledge the landscape’s rich, complicated history and work with community members who all share a deep personal connection to this landscape, the Partnership’s agreement has a real chance of being implemented in the Custer Gallatin National Forest’s new Management Plan, the first step toward legislation.
Not everyone agrees that working with others to build a shared agreement is the best path to designating more wilderness. Yet, this notion of compromise is not new to the Gallatin Forest Partnership Agreement.
The wilderness movement has a long history of collaboration to pass legislation, including some of Montana’s most significant wilderness achievements.
A few examples:
● In 1964, Montana senators and wilderness champions Lee Metcalf and Mike Mansfield accepted compromise because it was necessary to pass the Wilderness Act. The final law allowed livestock grazing to continue in wilderness and permitted miners to stake new claims in designated wilderness areas until 1984.
● In 1983, the passage of the Lee Metcalf Wilderness Act included the removal of protections from Mount Henry Wilderness Study Area, Cowboy Heaven, and the Tongue River Breaks Recommended Wilderness. (Not incidentally, the Partnership’s agreement would finally designate Cowboy Heaven as Wilderness.)
● In 1988, the vetoed Montana Wilderness Act proposed releasing the West Pine area from wilderness study area protection as part of the deal to secure 64,000 acres of new wilderness in the Gallatin Range.
Working together has always been a part of designating wilderness. To suggest otherwise is a dangerous misrepresentation or misunderstanding of wilderness history. Even with broad support for the Partnership’s agreement, we don’t anticipate passing this legislation will be easy. It will take all of us who love the Gallatin Range advocating for permanent protection of this landscape.
Here’s the unfortunate truth: outside of dedicated conservation circles, the dominant argument isn’t “How much wilderness is enough?” Instead, it’s “Do we want any more?”
The Gallatin Forest Partnership’s answer is yes. However, the road to new wilderness requires buy-in from a wide array of individuals, businesses and elected officials.
Working together increases the likelihood that implementation of the agreement, including future legislation, will be successful. Every member of the Partnership—from mountain bikers and hunters to backcountry horsemen and wilderness advocates—compromised in the interest of the greater good to produce an agreement that protects our shared interest in the ecological values of the Gallatin and Madison Ranges.
Because different user groups all have a stake in the Partnership’s agreement, they are committed to abiding by it. The agreement provides protections that we all accept and recreation guidelines that the Forest Service can enforce.
The Gallatin Forest Partnership provides a roadmap for the future: a strong proposal, backed by a broad coalition and adopted in a forest plan offers the best opportunity to designate new wilderness in the Gallatin Range. Of course, designating the entire roadless area in the Gallatins as wilderness is an appealing vision but one without a workable strategy for building crucial support outside of pro-wilderness circles.
How do you persuade the Forest Service to recommend the entire roadless area for wilderness when the agency didn’t recommend a single acre of the Gallatin Range for wilderness in its last forest plan and now answers to an administration that would rather sell out our public lands to extractive industries?
And how would you gain the support of our Congressional delegation and other elected officials when they have to listen to a constituency that includes communities with very different interests than Bozeman? 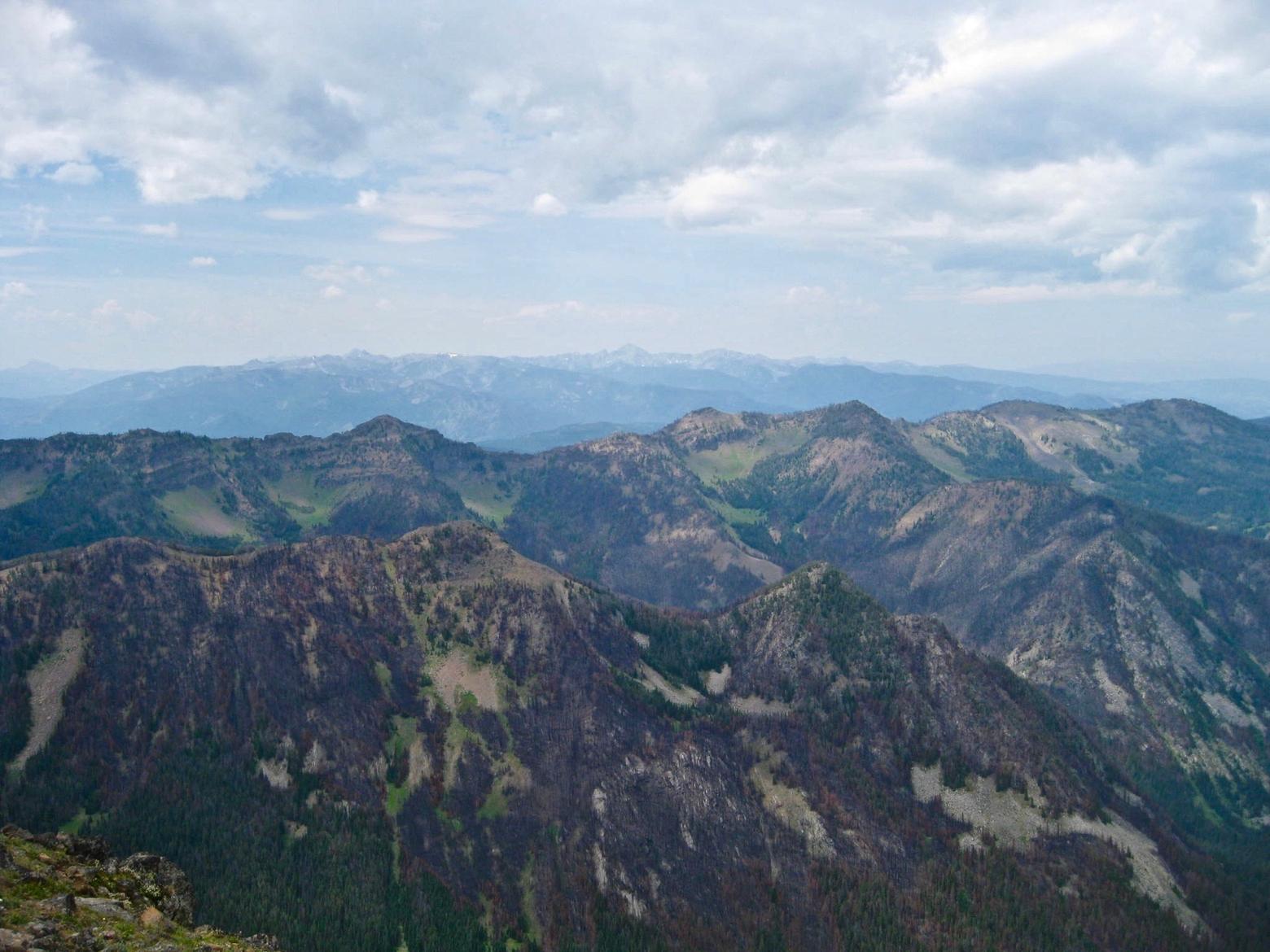 It’s challenging to have the difficult, honest and respectful conversations necessary to create a realistic and workable proposal that protects 250,000 acres of one of Montana’s wildest places.
Yet, the Gallatin Forest Partnership spent countless hours doing just that. It certainly would be easier for like-minded wilderness advocates to offer up a proposal for everything we wanted, but history and today’s political climate tell us that’s a fool’s errand.
We are proud to offer a solution that has a real chance of providing the permanent protection that the Gallatin and Madison Ranges have long deserved. We refuse to risk the future of these wild places on a bet that we can get more by working alone. The wildlife, water, solitude and innate value of this landscape are too important.
To learn more about the conservation protections proposed by the Gallatin Forest Partnership and explore the support we have built for the proposal by clicking here.
EDITOR'S NOTE: Hilary Eisen, Adam Oliver, Dane Rider, Barb Cestero, Darcie Warden and Emily Cleveland are members of the Gallatin Forest Partnership Steering Committee. All sentiments expressed here are theirs and not necessarily those of Mountain Journal.
About Hilary Eisen, Adam Oliver, Dane Rider, Barb Cestero, Darcie Warden and Emily Cleveland

Hilary Eisen is policy director of Winter Wildlands Alliance; Adam Oliver is director of advocacy for the Southwest Montana Mountain Biking Association; Dane Rider is a member of Backcountry Hunters & Anglers; Barb Cestero is a senior regional representative for the Northern Rockies office of The Wilderness Society; Darcie Warden is Montana Conservation Coordinator for the Greater Yellowstone Coalition; and Emily Cleveland is a senior field director for the Montana Wilderness Association.