Fishing's 'Hero Pose': How Do The Fish Feel?

In MoJo's The Week That Is, we have a lively conversation about efforts to be kinder to fish when we pull them from the water and mug for the camera 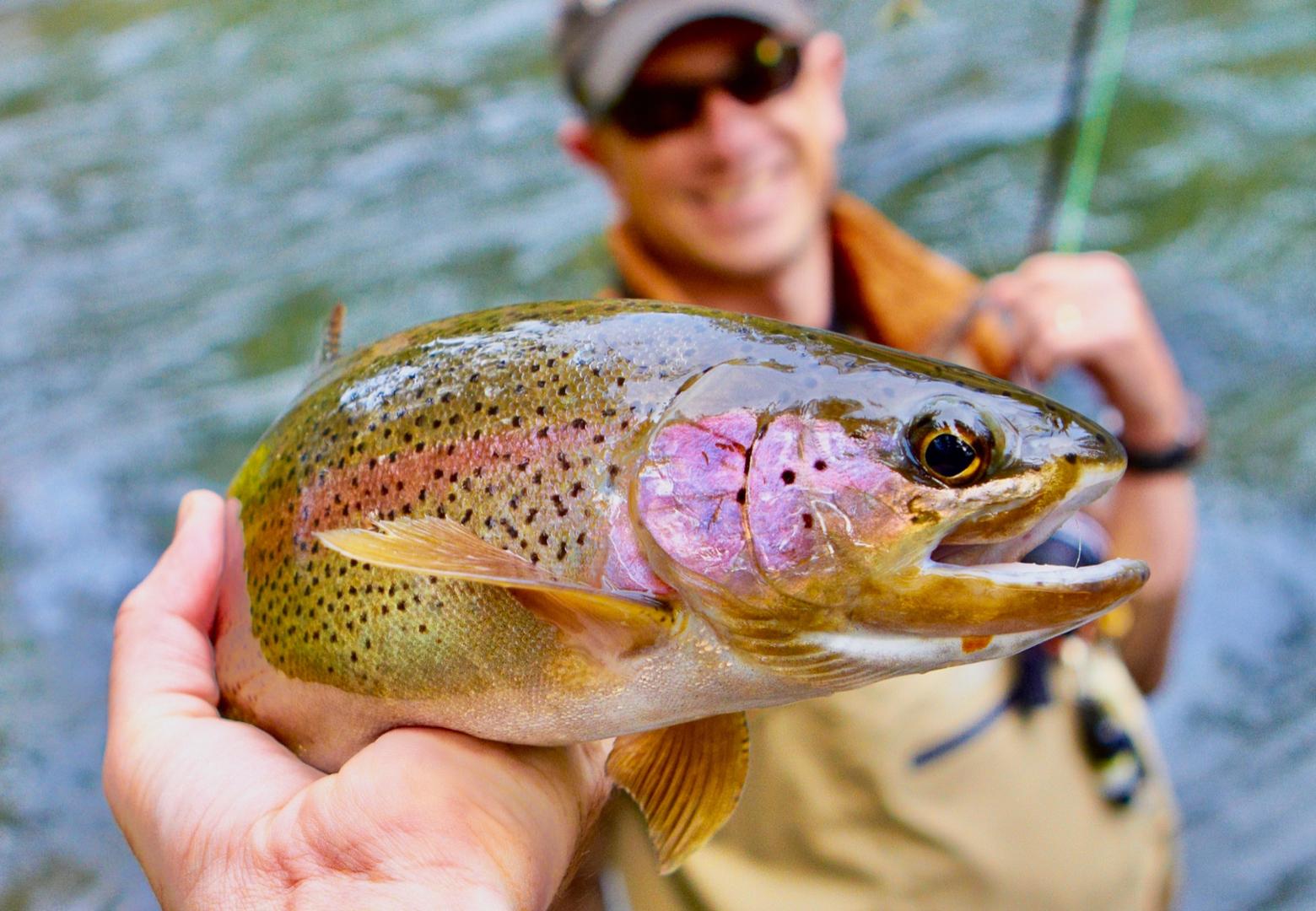 Beautiful rainbow trout, a photograph by Cale Bruckner CC BY-NC 2.0
Every week in “The Week That Is,” journalist and Mountain Journal founder Todd Wilkinson joins MoJo’s national Washington DC correspondent Tom Sadler in discussions of topical events relating to the nation’s capital city and/or the public land West. Today's conversation centers around the common human pastime of fisher persons posing for the camera with fish they've just caught on a line. With Sadler being a longtime fishing guide, he is an ideal person to field some questions.
TODD WILKINSON: Our region is one of the fly-fishing meccas in the world. In many Greater Yellowstone residences, and in many homes of people who visit Greater Yellowstone, there are photographs of people posed with the game animals they’ve taken during the hunt or on fishing trips. It's a ritual in angling that extends to almost any species of fish. You've been a longtime guide and conservationist. What's this tradition all about? It sure seems to have proliferated with the combo of camera phones and social media.
TOM SADLER: It’s pretty simple. If you catch a fish, you want to be able to prove it. You’ve heard the old saw, “all fishermen are liars,” so with that kind of reputation, fisherman feel compelled to document the event. Where the problem for the fish comes in is when fish are tossed up on to the bank, the angler digs around for the camera, poses with the fish, then chucks the fish back into the water. That sure is not good for the fish.
WILKINSON: In angling parlance, some refer to it as "the hero shot."  Can you explain the meaning of that?
SADLER: The so-called hero shot is holding up the fish out of the water, out in front of your grinning mug. It “proves” you caught the fish. It’s an age-old practice and back in the day when folks keep all the fish they caught, it really wasn’t doing any more harm to the fish. It was dead or headed that way.  As anglers and practices evolved, and catch and release became more prevalent, fish handling practices were revisited and those where the fish was out of the water for a long time were questioned.
WILKINSON: You have mentioned to me in conversation that there are actually forums where this phenomenon is discussed along with chats about barbless hooks or using flies with no hooks at all. Who set them the websites and why do they exist?  It sure seems that more  people are reflecting on this—trying  to empathize with fishing from the perspective of the fish. Let's point out to readers who feel defensive that MoJo is not "anti-fishing" just as when we recently discussed ethics in hunting and anti-predator bills in the Montana legislature, we're not anti-hunting either.
SADLER: Thinking about fishing from the perspective of the fish is never anti-fishing in my book, just the opposite. It was Lee Wulff, a vocal proponent and likely the originator of catch and release, who said, “gamefish are too valuable to be caught only once.” The logical inference is if you are going to release a fish you want it to live. That means you handle the fish with care and respect. Good anglers and guides know fish handling techniques are a skill you need to learn and use.
WILKINSON: I’ve heard fish referred to as a “renewable resource,” especially trout populations like we have in Montana where streams are not stocked and rather the emphasis is on nurturing conditions for wild, river-born fish to thrive with plenty of quality habitat… 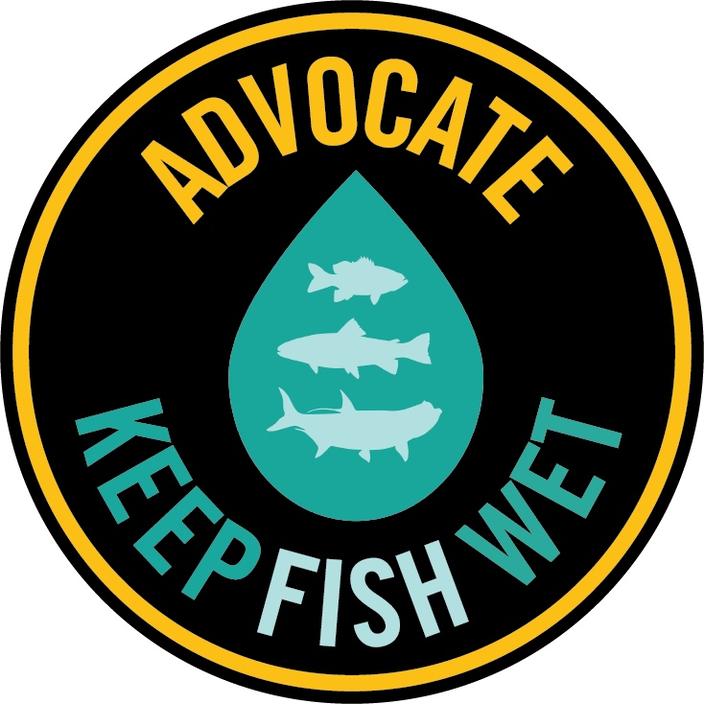 SADLER: In the last few years, catch and release has evolved. My friends Andy and Sascha Danylchuk have been leading an effort called Keep Fish Wet. “Science shows that even small changes in how an angler catches, handles, and releases a fish can have positive outcomes once that fish swims away,” they’ve written. “ Not only does using best practices increase survival rates of fish, but it also helps fish return to their normal behavior as quickly as possible after release. Using best practices for catch-and-release is a quick and effective way to put conservation into practice.” I encourage our readers to learn about it on their website, Keep Fish Wet.
WILKINSON. Another topic involves humans showing empathy for the fish that when it is taken out of the water for a picture the angler then holds one's breath. Please explain.
SADLER: It’s a pretty simple concept. If you take a fish out of water you are forcing it to hold it’s breath. So, fair’s fair. If you want a “hero shot” or some such with the fish out of water then when you take the fish out of water, take a breath and hold it. When you need a breath, then the fish does too.
The other thing is water drops. If there are not drops of water coming off the fish, then it has been out of the water too long. There is a new catch phrase going around that makes sense, “make the fish the hero.” If you want a photo, do it with the fish in the water. Brian O’Keefe is a master at this. Readers can check out his images on his website, Brian O'Keefe Photography.
WILKINSON:  For the record so that readers understand, I fish; have my whole life; it's part of the imprint of nature made early and I cherish the memories. Saying this, and having conversations with people in the angling community whom I admire, there's also this reality: Often ignored is the fact that with catch and release fishing, we are using fish as objects for our personal entertainment and pleasure. They do not ask to be dragged from the water nor participate in a likely painful activity over and over again if they survive. I realize that to fish is to rationalize. Do you wrestle with this too?
SADLER: You’re digging deep with that question. Yes, In the last few years I have wrestled with it. On one level there is no explanation that will make sense to all people. And I can live with that. The reason I fish is for what it does for me. It is, as you said part of the imprint nature made on me at the start of my life. I respect the fish, the habitat and the opportunity. For me it goes way beyond entertainment and pleasure although those both are benefits. It is the excuse or justification or rationalization to get out to the wild. Where I fish and how I fish are what gets me outdoors and ground me. As Robert Traver wrote, “Because, in a world where most men seem to spend their lives doing things they hate, my fishing is at once an endless source of delight and an act of small rebellion.”
The "collateral benefits" to the ecosystem are part of the justification or rationalization for my fishing and guiding. Because I care so much for fishing and the places I fish, I do a fair amount to protect them. Would I put the same effort into protecting those places if I didn’t fish? Likely not. I suspect that is true of many anglers.

A band of fishing folk, young and old, pose with their catch in Yellowstone decades before the park imposed strict catch and release regulations. Photo courtesy NPS
WILKINSON: What's the greatest personal epiphany that fishing has ever given you?
SADLER: The greatest personal epiphany has to be how much I love being out there fishing, either alone, with friends or with clients. I’ve been fly fishing for more than 50 years and I was just as excited to go out last week as I ever was. Nothing else I do comes close. I fear losing it, so I fight hard for it.
WILKINSON: When you are guiding, say, a stressed out corporate executive who is tiered to constantly competing, either in the marketplace or on the golf course with associates, how do you help them shift away from thinking about fishing only as an endeavor of how many fish they hook or how large?
SADLER: That may be the hardest puzzle in guiding for me. I like to move the conversation toward the experience rather than the numbers. I’m pretty up front about it with all my clients at the start of a trip. I like to know what their expectations are. If they are looking for numbers, I give them a realistic response then, as the day goes on, I talk about the fishing experience when they catch one. What they did, how hard or easy it was, what the fish did, what the client felt and learned. Often enough they start seeing the bigger picture.

WILKINSON: Let's end with this. How do you personally push yourself to appreciate the intrinsic value of nature or of wildlife, which is different from viewing it as primarily an amenity that exists to be monetized—and what can we learn from that?
SADLER: I think I’m lucky that way. I know that the places I fish, are for the most part, beautiful places, so I don’t have to push myself. I’m usually pretty good about situational awareness and having a sense of what is around me, so I take advantage of that and spend time appreciating my surroundings and enjoying the comfort and solace of those surroundings.
WILKINSON: So, can we also go hunting and fishing with the intent  to not solely  see how well our aim is or whether we can match a hatch and get fish to rise to the artificial fly?
SADLER: Here’s what we can learn. Don’t settle for one reason to go outdoors. There are so many more reasons to get out there and enjoy it, learn from it, become humbled by it.  As Edward Abbey said, “breathe deep of that yet sweet and lucid air, sit quietly for a while and contemplate the precious stillness, the lovely, mysterious, and awesome space.”
The great outdoors is easy to take for granted, especially one that has healthy fish and wildlife populations. If we don’t learn or re-learn to appreciate the intrinsic value of nature we will wake up one day and it will be gone or taken away from us.
Increase our impact by sharing this story.

GET OUR FREE NEWSLETTER
Never Miss A Big Story!