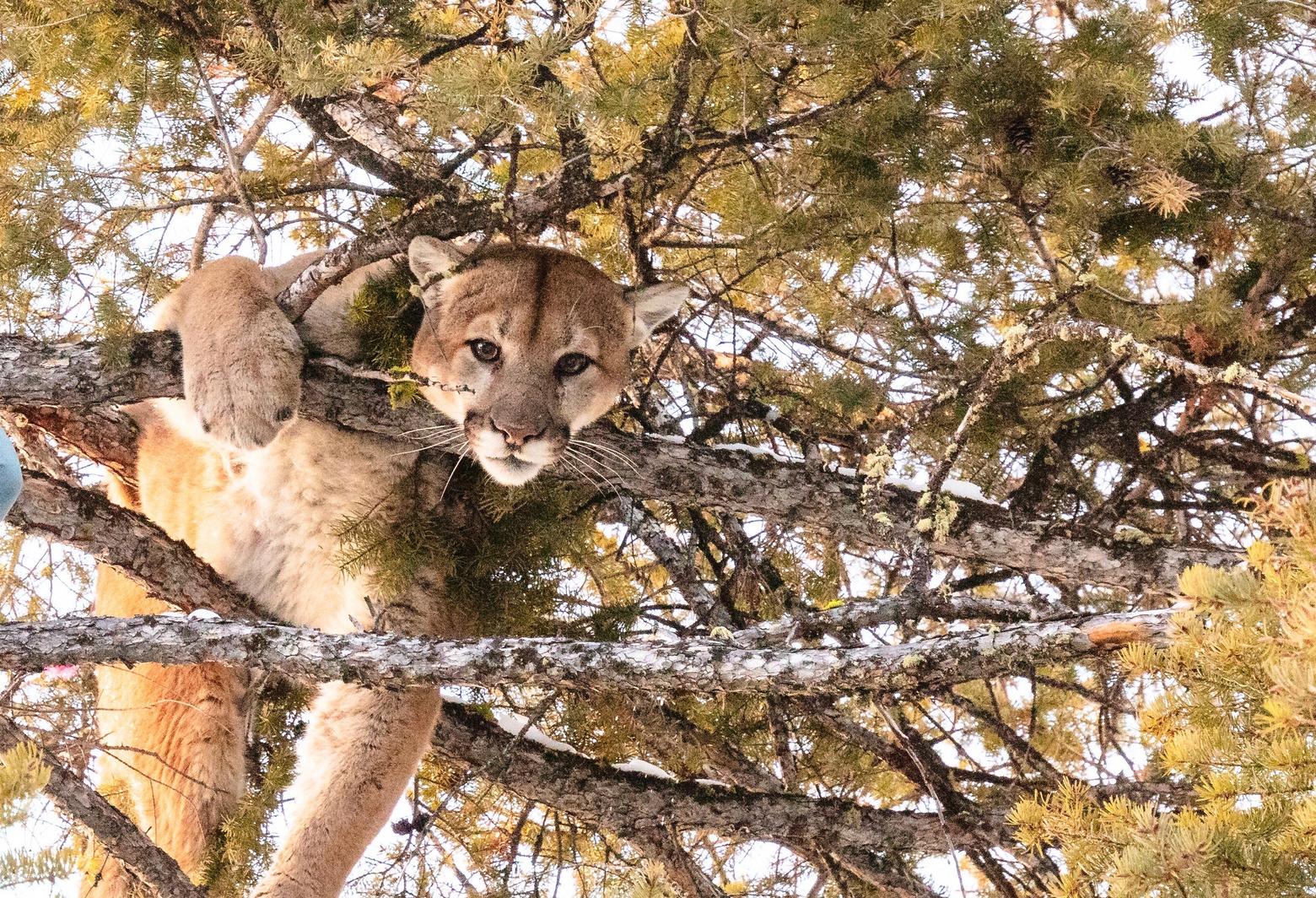 A cougar like this one, part of ongoing research in Yellowstone, was treed and killed by Montana Gov. Greg Gianforte in late 2021. After word leaked that he had taken the lion in an area not far from where he trapped and killed a wolf that had wandered outside Yellowstone, he refused to confirm or deny details of his hunt. Photo by Jacob W. Frank/NPS
By Todd Wilkinson
It had all the makings of a great story.
The anonymous call came in the earliest days of this new year. The tip, and a series of subsequent off-the-record discussions, involved word that Montana Gov. Greg Gianforte allegedly had shot and killed a cougar in the Rock Creek drainage rising above Paradise Valley, Montana during the last week of 2021.
Allegedly, the animal was not just any mountain lion, but a male wildcat with a GPS tracking collar around its neck, part of important ongoing wildlife research in Yellowstone National Park. The project, led by park biologist Dan Stahler, is intended to shed light on how the stealthy animals live, moving back and forth across the invisible boundary of America’s first national park.
One might think Gov. Gianforte, a proud outspoken big game hunter, would not hesitate to confirm or deny the incident occurred when contacted. One might think that in the name of accuracy, he and his press secretary, Brooke Stroyke, would openly answer questions to help insure that details of the incident were reported accurately.
This is not solely the real-life tale of a prominent public official who killed a five-year-old animal, Cougar M220, that lived much of its life in Yellowstone and died after wandering 10 miles north of it; it is also a story, observers say, of obfuscation by Gianforte and his staff in being willing to tell the truth when asked, ostensibly because the details might be embarrassing. It raises questions, too, about what constitutes real fair chase in the hunting of iconic animals.
° ° ° °
For purposes of what appears here in Mountain Journal, this also involves the decision to not impetuously tell a story based on hearsay and rumor, but an attempt to try to get confirmation that the alleged incident actually happened. Related is the irony that public officials like Gov. Gianforte who has shown his disdain for so-called “liberal media,” and who has claimed the media often gets stories wrong, would not, when pressed, confirm or deny facts.
A reporter for The Washington Post wrote a story published on March 1, two months after the incident occurred, in which Stroyke was forced to acknowledge that Gianforte had killed the cougar on Monday, Dec. 28, 2021. The attempt to get corroboration had, for Mountain Journal, been ongoing for several weeks with Stroyke refusing to respond to media inquiries. 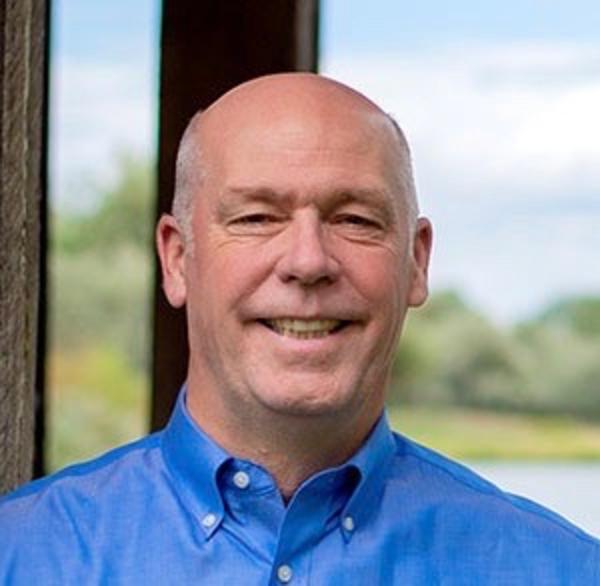 Montana Gov. Greg Gianforte
Mountain Journal first contacted Stroyke by email at 3:50 pm on Jan. 4, 2022 with the request for a phone call.  She responded at 4:32 pm on that same day with a note, “What can I help you with?”
A few minutes later, this journalist wrote back: “Hi Brooke, I am trying to confirm/factcheck if Gov. Gianforte had a successful mountain lion hunt up Tom Miner Basin on Dec. 28, who his guide was, where the hunt took place and how the hunt unfolded. Some information was passed along by an outfitter and I like to be accurate. Can you please confirm or correct the info and provide any other details?”
The next morning, on Jan. 5, Stroyke responded, “Looking into this.”
A week later, she was contacted by email again but Mountain Journal received no reply.  Another phone message was left. Several additional weeks passed and another email was sent—still nothing on Feb. 15.
Mountain Journal believes it is better to be second and accurate than first and risk being in error. While the incident is one of great public interest, and while several people in Paradise Valley who knew about the incident pressed us to publish something, we refrained because we could not get confirmation from anyone who was part of the cougar hunt.
According to state law, the identities of hunters who kill cougars, wolves and other animals are not, and cannot, be disclosed by state fish and wildlife officials to the public. The law is intended, in part, to protect hunters and trappers from being harassed by animal rights activists. The state keeps an ongoing tally of both wolves and cougars killed during sport seasons in various parts of the state but it does not divulge exact locations, nor the identities of outfitters and guides who might be chaperoning clients.
Not long after the tip arrived from a caller who asked to remain anonymous, and a few snippets of information were posted on social media, Mountain Journal chose not to publicize or circulate information that could not be immediately verified.
Here is how the fact-checking worked. Contact was made with officials in the district office of the U.S. Forest Service to obtain a list of hunting guides permitted to pursue cougars with hounds in the Gallatin Range in areas of Tom Miner Basin and Rock Creek. Contact was made with Yellowstone National Park to try to confirm that a radio-collared cougar had been killed north of the park but park officials said they were unable to comment.
Mountain Journal also left a phone message and sent an email to hunting outfitter Matt Lumley, who has served as vice president of the National Trappers Association to get confirmation and a comment. Lumley had guided Gianforte in 2021 when he killed a radio-collared black wolf, known as Wolf 1155, that was part of an ongoing wolf research project in Yellowstone. Lumley also is a ranch manager at Point of Rocks Ranch where Gov. Gianforte had shot the wolf in February 2021.
The ranch is owned by Robert E. Smith, an executive with conservative Sinclair Broadcast Group. He reportedly is a good friend of the governor’s and has been a contributor to Gianforte’s run for public office.
The leaked information given to Mountain Journal was based, at least in part, on conversations overheard at a local saloon and suggested that Lumley was with Gianforte when he killed the mountain lion. Lumley did not respond to Mountain Journal’s request for a chat.

When asked to comment on Gianforte shooting a wolf in a trap in early 2021 and then, seven months later, shooting a mountain lion out of a tree, unable to escape, Dr. E. Donnall Thomas said, “If those are the facts, it suggests to me that you are dealing with an unethical party. I would draw the distinction that it’s the difference between a hunter and shooter."

On four different occasions, the first being within days of the alleged cougar killing, Mountain Journal reached out to Ms. Stroyke. The first reply received was cordial. The second said that she would look into it. The third and fourth inquiries went unanswered.
Without being able to get confirmation from the governor, his guide or another eyewitness, evidence that Gianforte had killed the cougar would have been based on hearsay which runs counter to allowable content in Mountain Journal.
In the meantime, Mountain Journal did thorough fact-checking confirming that a cougar, part of ongoing Yellowstone wildlife research, was killed in the area Gianforte was purported to be—in the Rock Creek drainage on the Custer Gallatin National Forest.
Another tip suggested that Lumley had pursued the cougar which tried to flee by climbing a tree, then contacted Gianforte and told him that the cat could likely be held for three hours but the governor needed to get to Rock Creek as fast as possible if he wanted to shoot it. The person did not know where the governor was when he received the call, allegedly from Lumley, but said Gianforte flew his private airplane to Mission Field airport in Livingston, Montana and then drove south to where the cougar was treed.
That assertion could not be proved, as an online flight log shows no record of Gianforte’s private plane landing in Livingston in late December 2021.
Again, Mountain Journal sought to corroborate all information with both the governor and Lumley. After The Washington Post learned of the incident and moved to publish a story on March 1, Stroyke was forced to hastily craft a statement.
According to the Post, the statement written by Stroyke read:
“The governor and friends tracked the lion on public lands. As the group got closer to the lion, members of the group, who have a hound training license, used four hounds to tree the lion once the track was discovered in a creek bottom on public land.” After Gianforte shot the male radio-collared lion, he put his lion hunting tag on it, Stroyke wrote. “He immediately called to report the legal harvest and then the [Montana Fish, Wildlife and Parks] game warden. In Livingston, the governor met the game warden who tagged the lion and took the collar.” 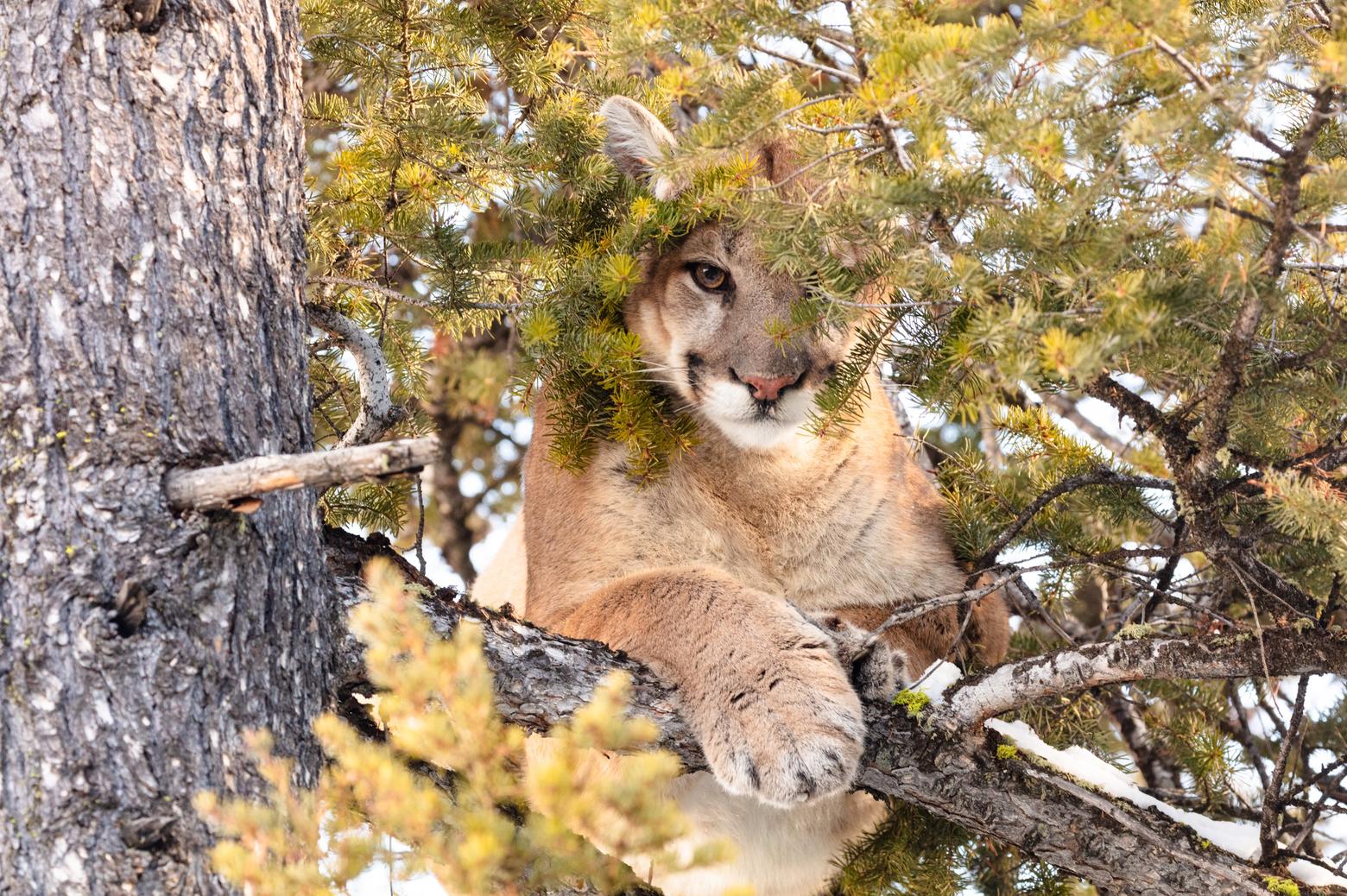 Below is email sent to Gianforte's press secretary Brooke Stroyke on Jan. 4, 2022: 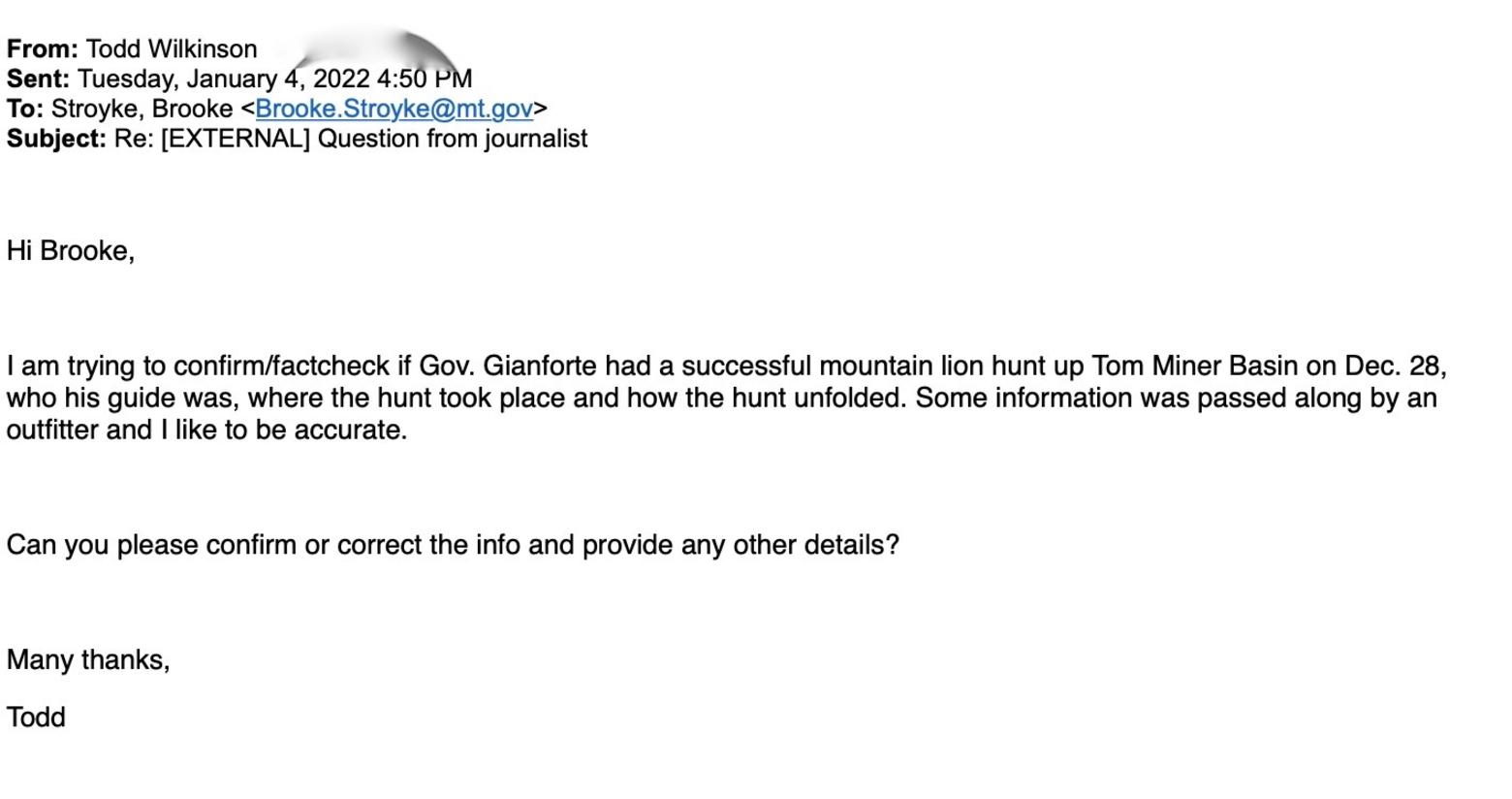 Todd Wilkinson, founder of Mountain Journal,  is author of the new book Ripple Effects: How to Save Yellowstone and American's Most Iconic Wildlife Ecosystem.  Wilkinson is a journalist proudly trained in the old school tradition. He's been writing about Greater Yellowstone for 35 years and is a correspondent to publications ranging from National Geographic to The Guardian. He is author of several books on topics as diverse as scientific whistleblowers and Ted Turner, and a book about the harrowing story of Jackson Hole grizzly mother 399, the most famous bear in the world which features photographs by Thomas Mangelsen. For more information on Wilkinson, click here. (Photo by David J Swift).
Read more