Summer, 'The Exuberant Season' Of Bison Life In Yellowstone 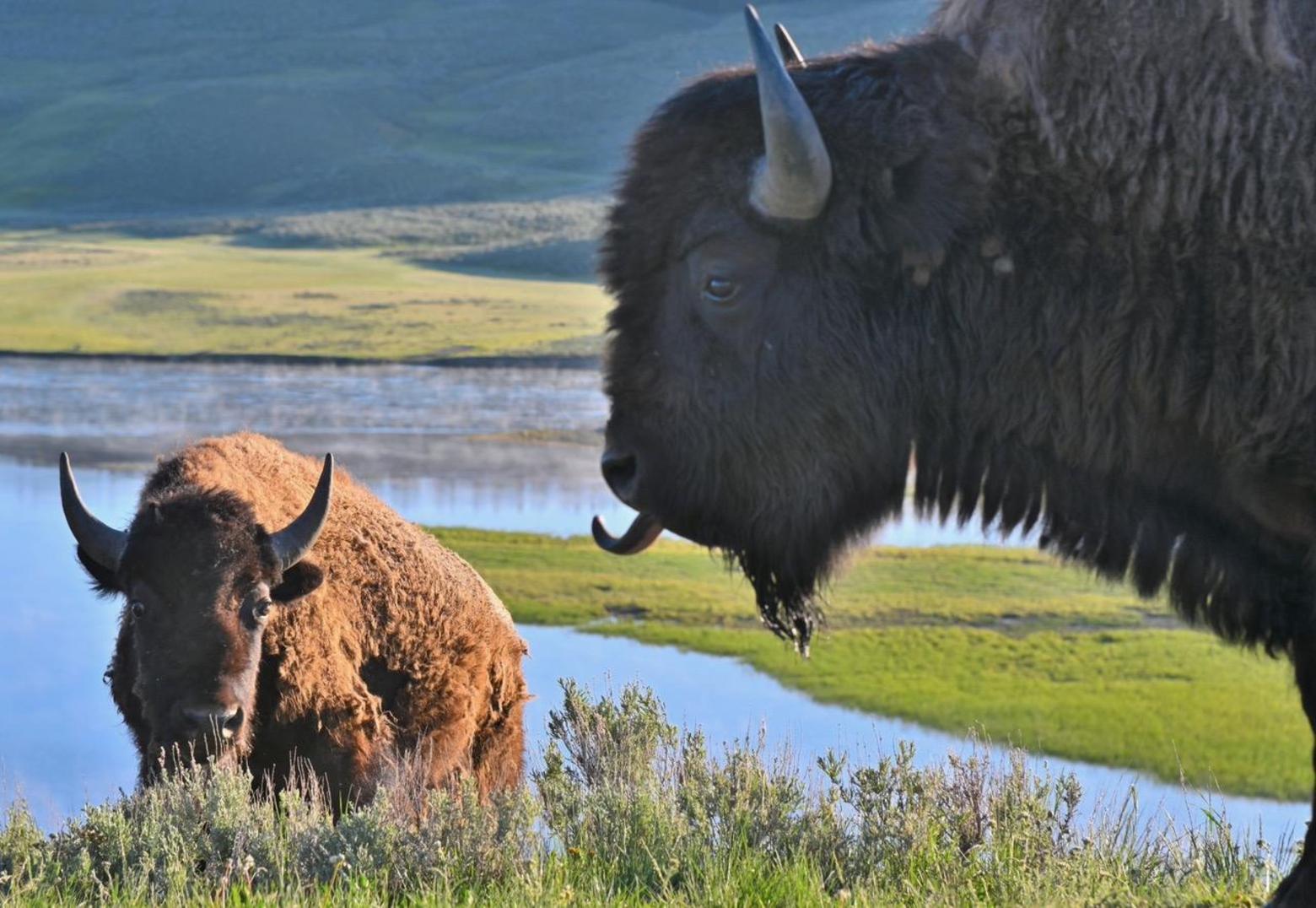 A bison mother uses all of her sensual capabilities to gauge cues of what's happening in the Yellowstone landscape around her—part of animal sentience we humans only modestly grasp. In this case, she is "tasting" the air with her tongue.
by Steven Fuller
Too many photos of bison, you may wonder, looking at this essay? I have hundreds of thousands more from my nearly 50 years assigned to live and work at Canyon and making early morning forays  into Hayden Valley.
It is their exuberant season—bison time— here in Yellowstone and they are among the last token survivors of the magnificent diversity of North American megafauna—the vast majority of whom went suddenly extinct just 10,000 years ago.  More recently, say only a few human generations ago, we nearly lost bison as a species, the result of deliberate eradication.
At Canyon, I happen to inhabit a bison neighborhood; they live nearby, in the meadows around my home and, of course, in the Hayden.
Every summer lots of truck traffic moves to and fro across park highways as part of the improvement…of Yellowstone’s infrastructure.  The heavies mix with the congested often high-speed visitor traffic, of which there seems to be record-shattering numbers again this year. Many of the motorists ignore the park's traffic regulations let alone the mandated maximum 45 mph speed limit. 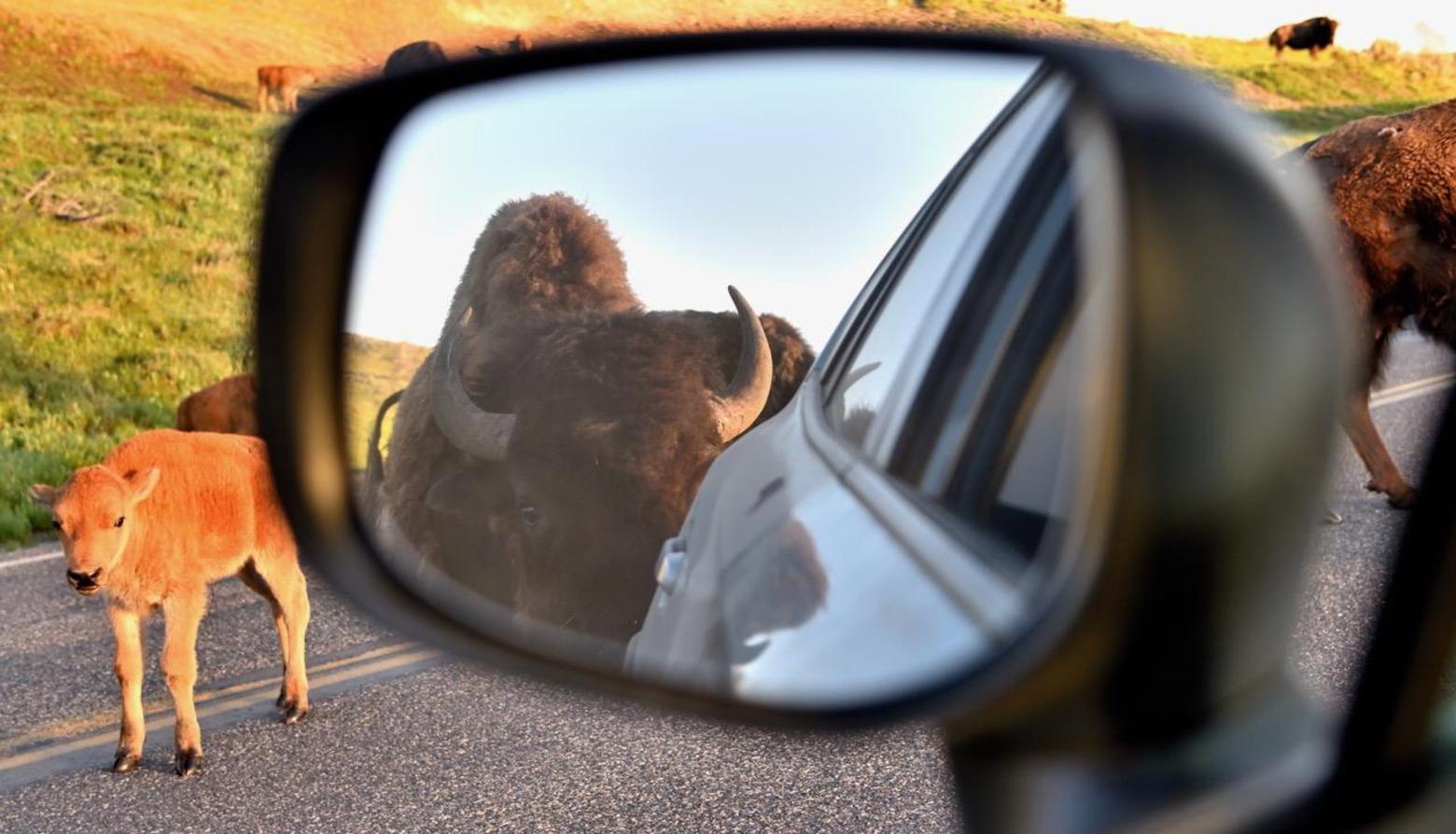 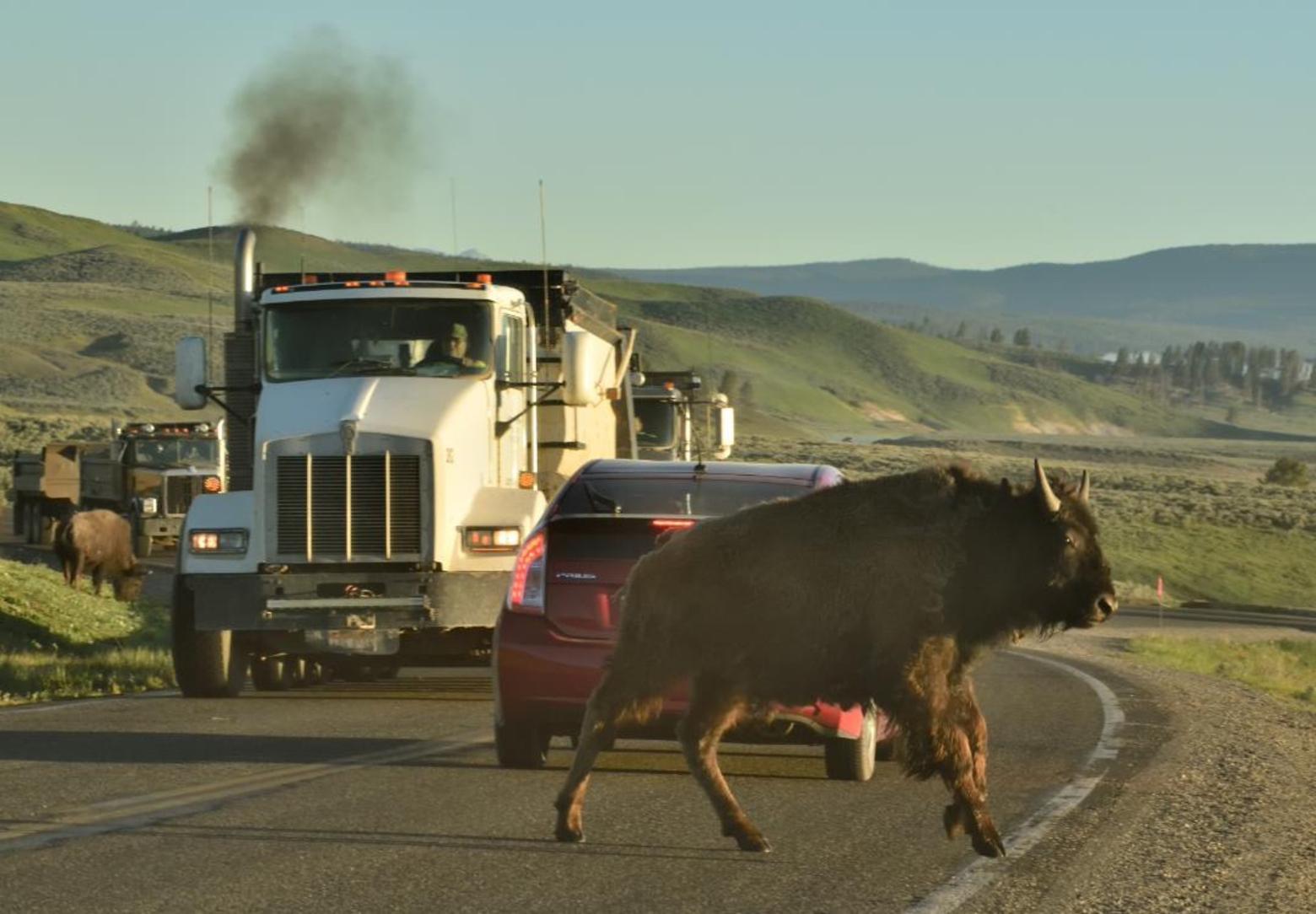 Above: Adventuring down the Yellowstone Anthropocene Highway
Yesterday morning, as is my daily habit, I drove up river through Hayden at first light to enjoy the sunrise.  As usual, especially in places where there are clusters of hot springs, fog filled the valley bottom.  Such are some of the atmospherics you find in Yellowstone and few other places on Earth. 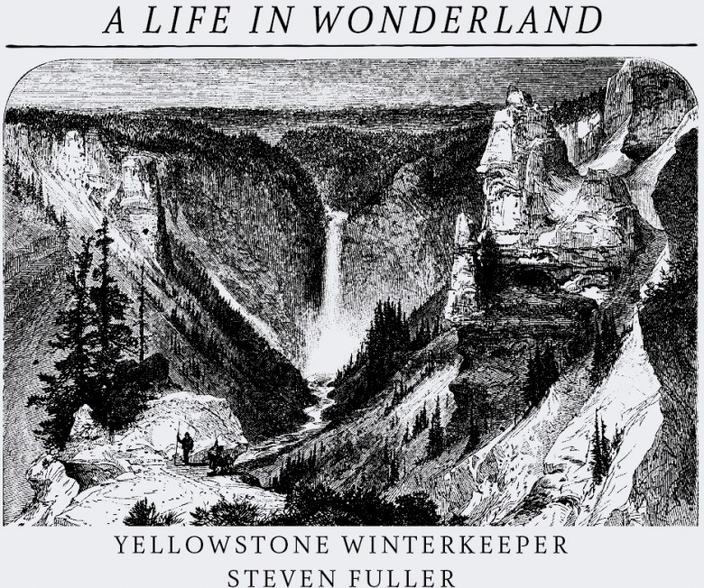 Near the south end of the valley I passed a north bound wrecker flat-bed truck carrying a sedan car with a badly smashed front end and a crushed hood.  Said to self, “Uh Oh!—high speed hit on a big buffalo bull!!" Even at a glance, the damage told the tale.
Most all Yellowstone visitors come from an urban place, from congested spaces—the U.S. Census Bureau defines an American urban area as having a population density of at least 1,000 people per square mile (386 per square kilometers). Their urban work-a-day highways are bumper to bumper, speed limits are generally ignored, if congestion permits, and if they can get away with it. Aggression is a given.
But their environs do not have bison, grizzlies and black bears, elk, moose in their path or bringing their commutes in stoppage 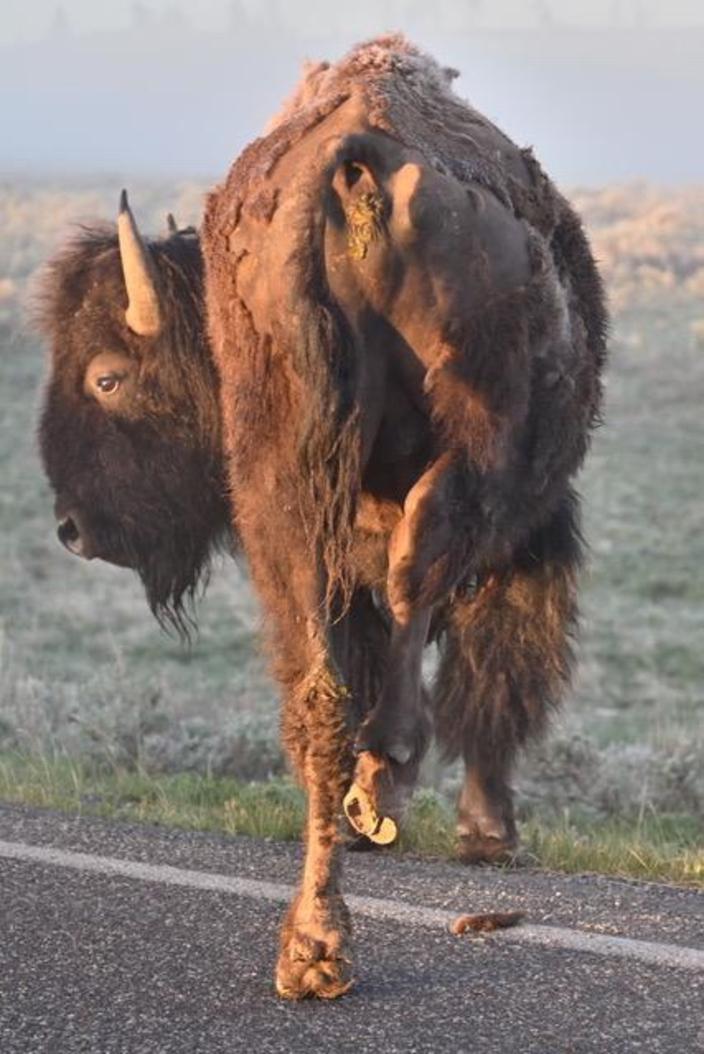 A bison with an eventual mortal injury to its right hind leg. Was it caused by vehicle collision or something else?
During mid- day in the mid-summer tourist season, where we are now, Yellowstone’s highways are frequently grid-locked. But in early and late portions of the day and at night the highways are relatively empty which encourages visitors to ignore park speed limits…ah, yes, the lure of the open road and not setting their pace according to what's best for the inhabitants of this place.
In Yellowstone I always travel no more than two or three mph above the park speed limit. I drive slower in known high density animal areas, particularly when the fog is thick or the roads are icy, or when all three conditions exist.
Whatever the conditions I am frequently tail-gated, often followed aggressively within a few feet of my rear bumper. Often I am overtaken despite the painted double yellow lines. In the acoustic non-verbal wake of their passing their vehicular body language, “F’you!”, is obvious.  In reply I say softly to myself, “I hope you don’t kill anything.”
photographers.
Anticipating bad news after passing the wrecker north bound I found the dead bull just south of the Mud Volcano thermal area, the corpse, fresh killed, was of a beautiful buffalo bull lying in the road side ditch. His eyes were still clear.  Even the ravens had not yet taken them. The shame of his death.
A couple of law enforcement rangers, red white and blue lights flashing, were present at the side of the road, waiting the NPS maintenance front-end loader to clear up this roadside litter and to put this death in a dump truck for natural recycling at the designated road-kill back country dump site. There, at an undisclosed, scavengers of various kinds will eat it without bother of

This bull was just one statistic in the annual Yellowstone wildlife “wastage”— consequent of four million-plus park visitors each year—and, yes, this year promises, like global warming temps and wildfires, to exceed all records since the establishment of the park in 1872, which will be 150 next year and likely will be feted with lots of added tourism promotion.
Coming home from work early one evening I found one of the dead bull's cohorts hanging out next to my home. The meadows we share, overlooking the Lower Falls of the Grand Canyon of the Yellowstone, have been home range to his ancestors for the past 10,000 years. 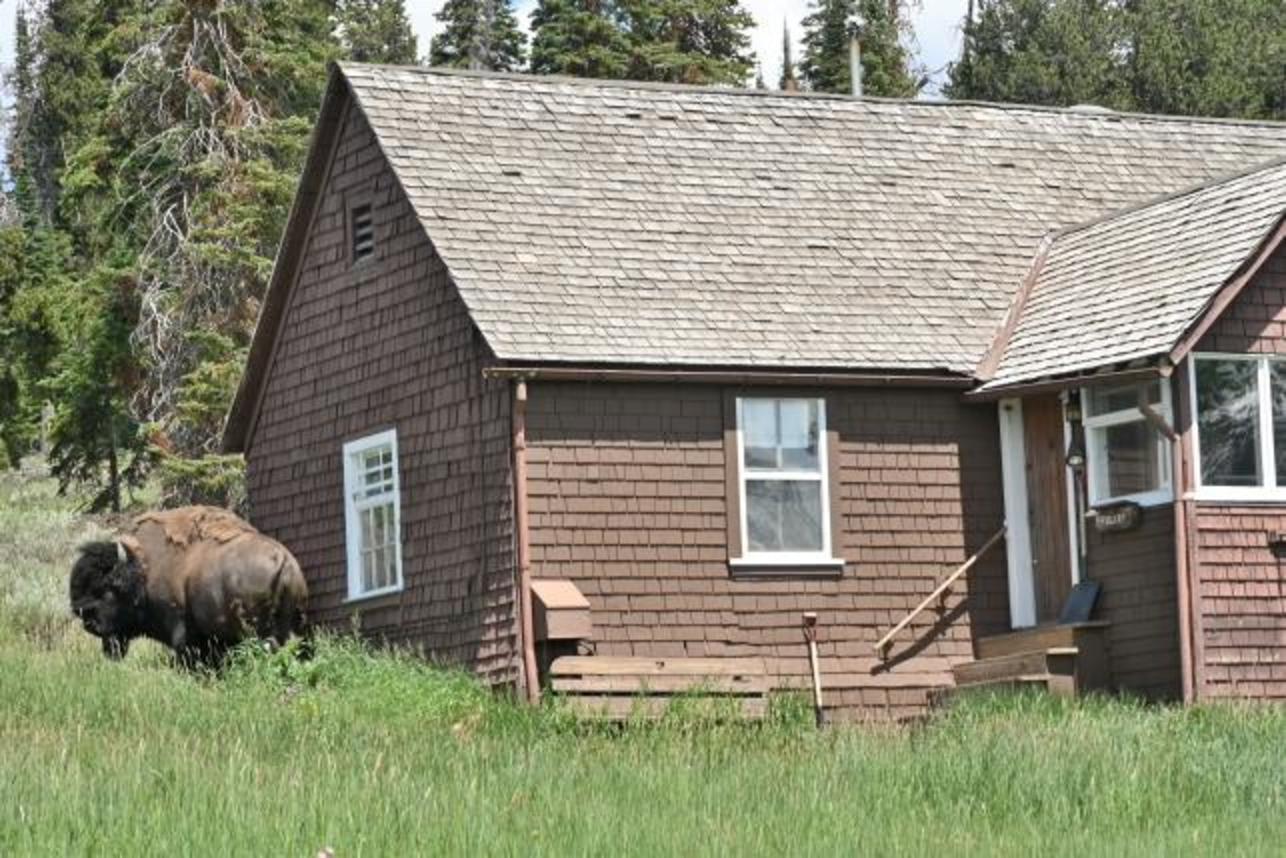 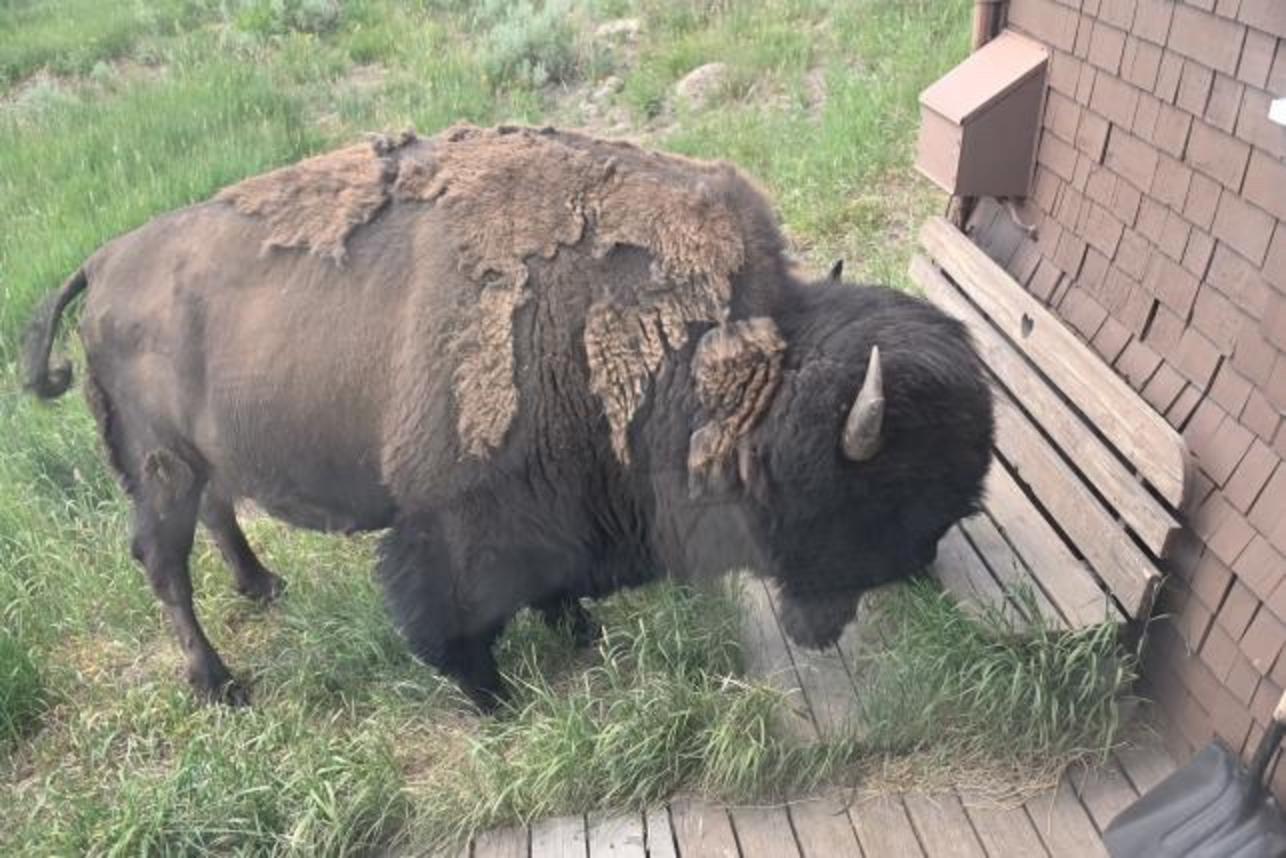 My home was built on his ancestral meadows 111 years ago, (perhaps several decades earlier @ Aubrey Haines emeritus Yellowstone park historian intimated). This afternoon my access to the front door was a bit dodgy—as it often is.
Particularly when said bison moved even closer to my front door. I made my way round to the back door which seemed less likely to alarm him.  My action was not based on fear, rather on respect. I would never dream of disputing his primordialis rights to this place.  And if we don’t extinguish his genome his people will be here long after my people are gone.
In even the very best case both our descendants will inherit a much degraded planet. Citoyennes, we need to wake up. The canaries are dying!
Below, as a more joyous commentary, here are some recent photos and captions from having the privilege to share a few moments with these fellow sentient beings. 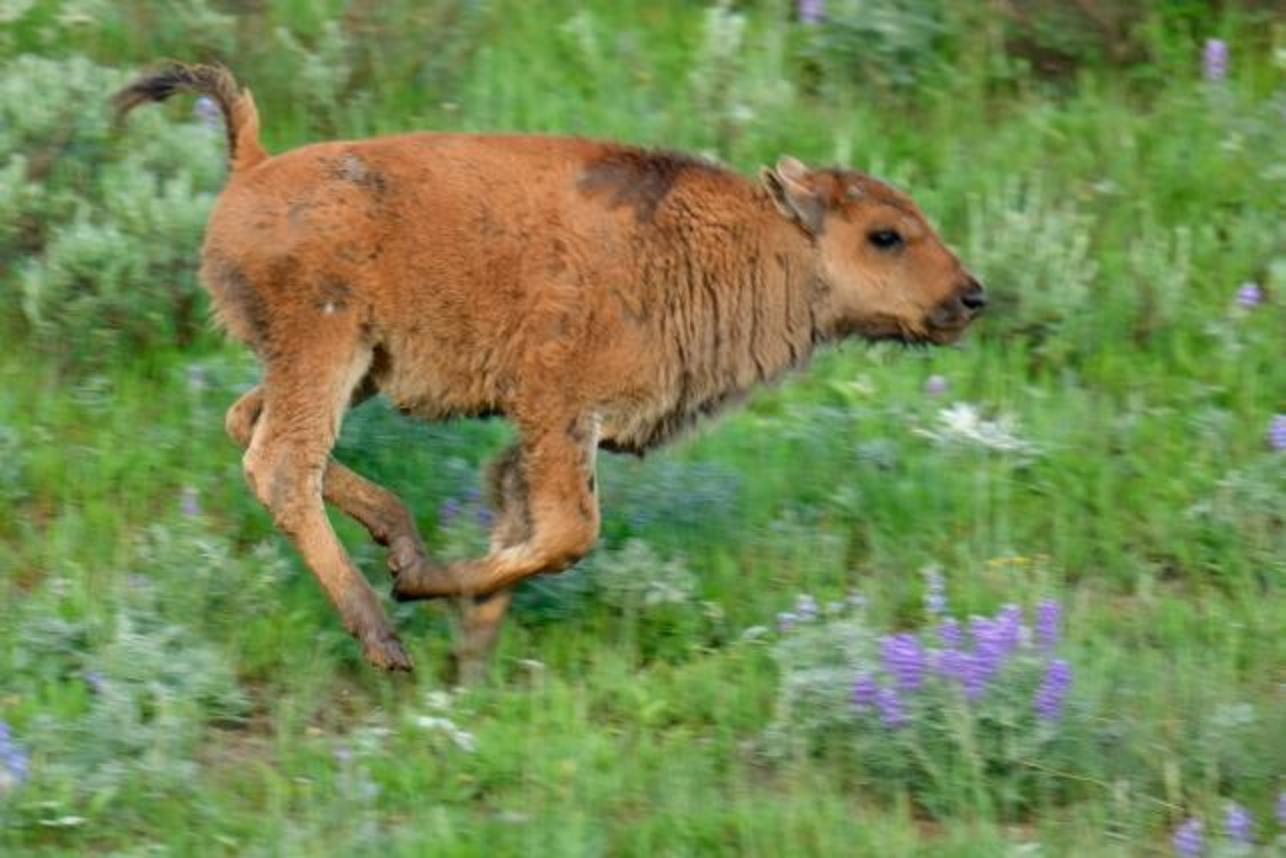 The exuberance of childhood; I remember it well.

Wildflowers perfume the first months of these new calves' lives. Will they, as adults, associate the fragrance with their youth? 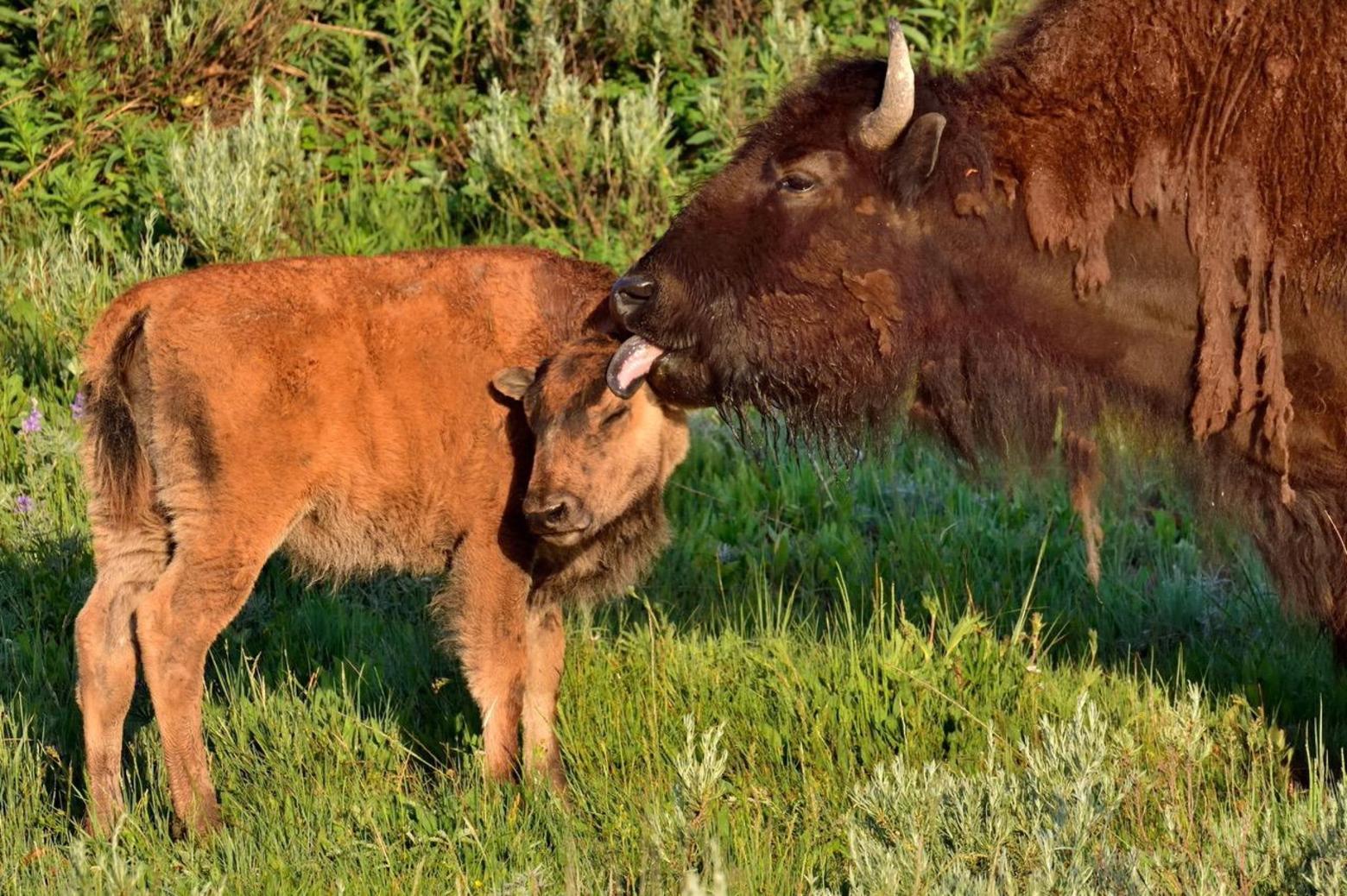 Mama always is there to comfort with an affectionate lick. 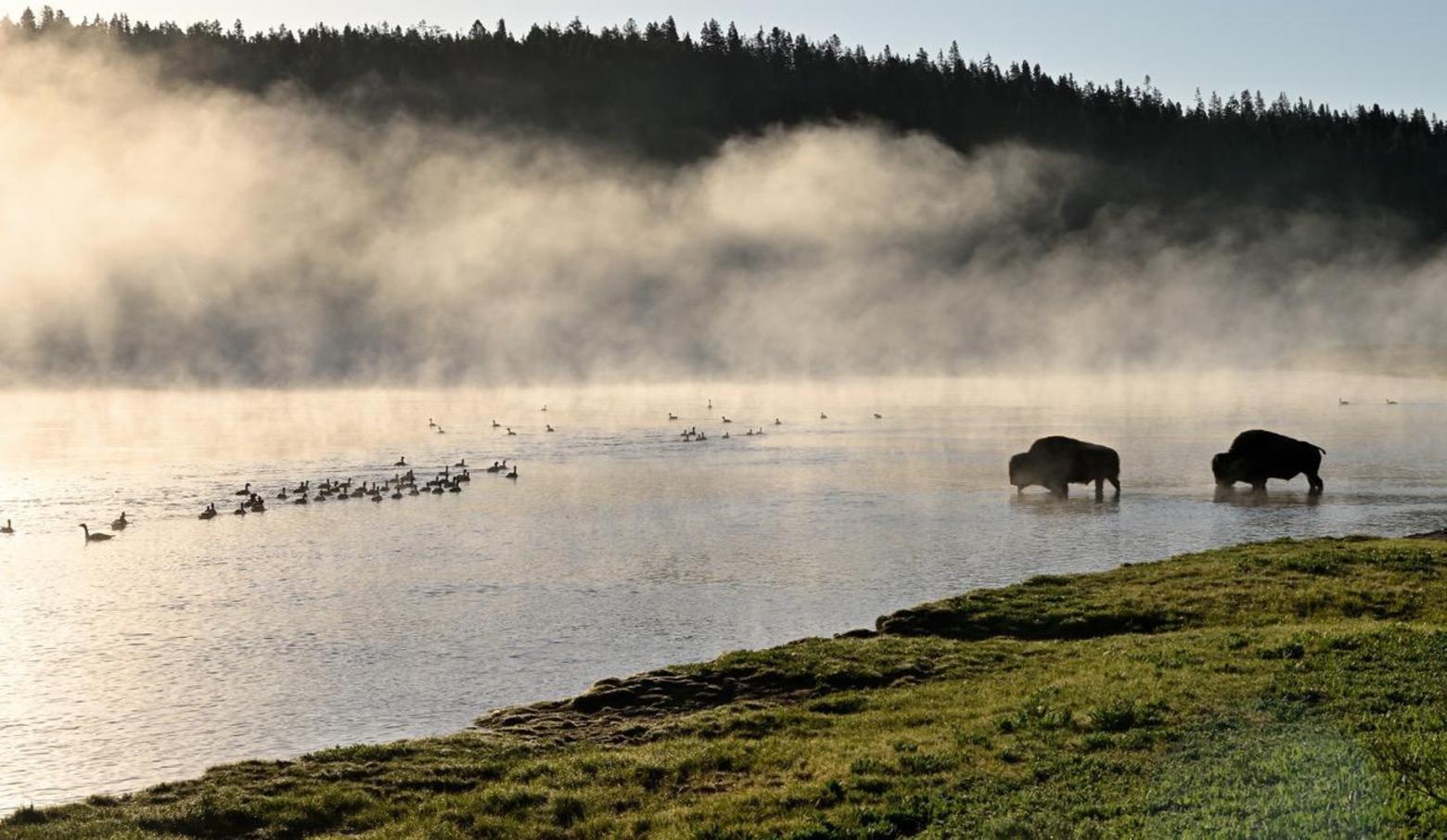 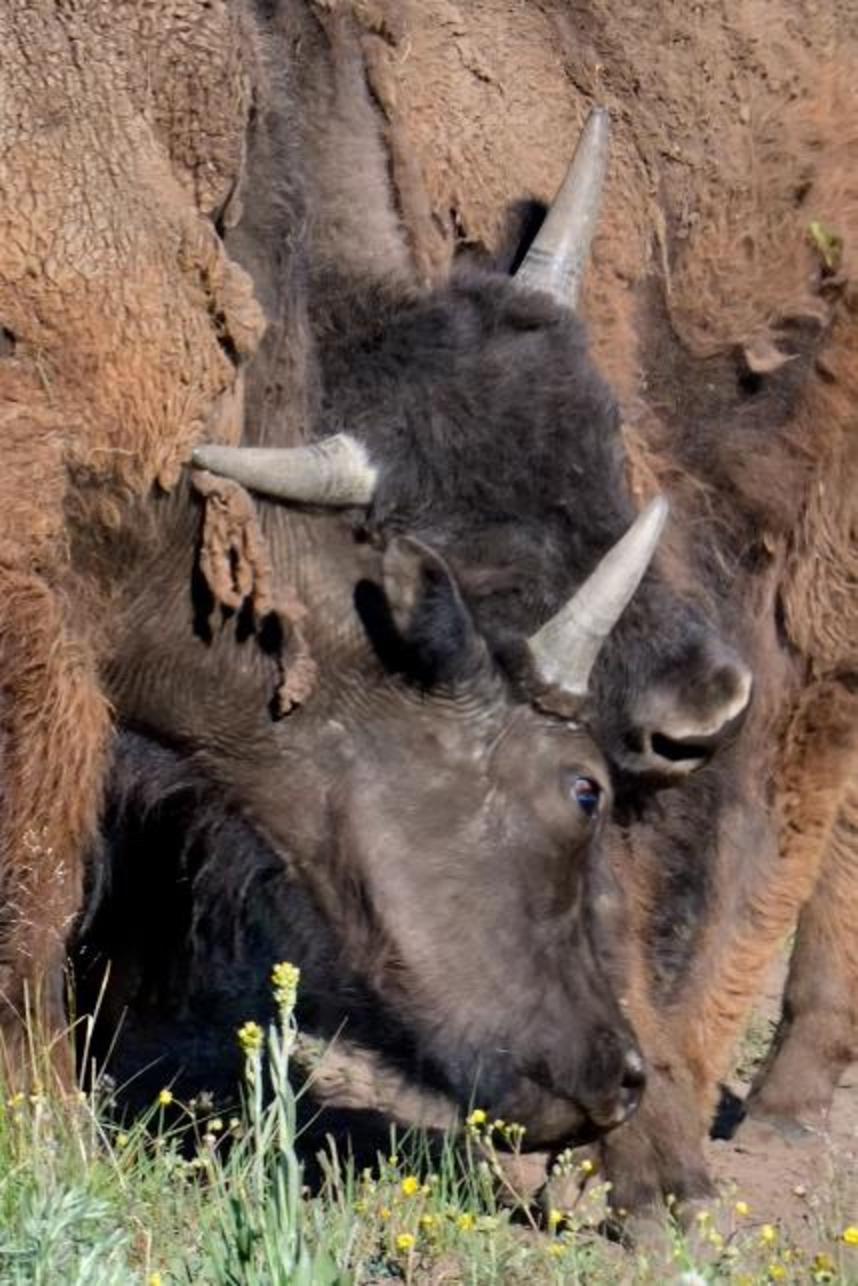 Bison are social beings and like ourselves interact throughout their lives in complex ways. 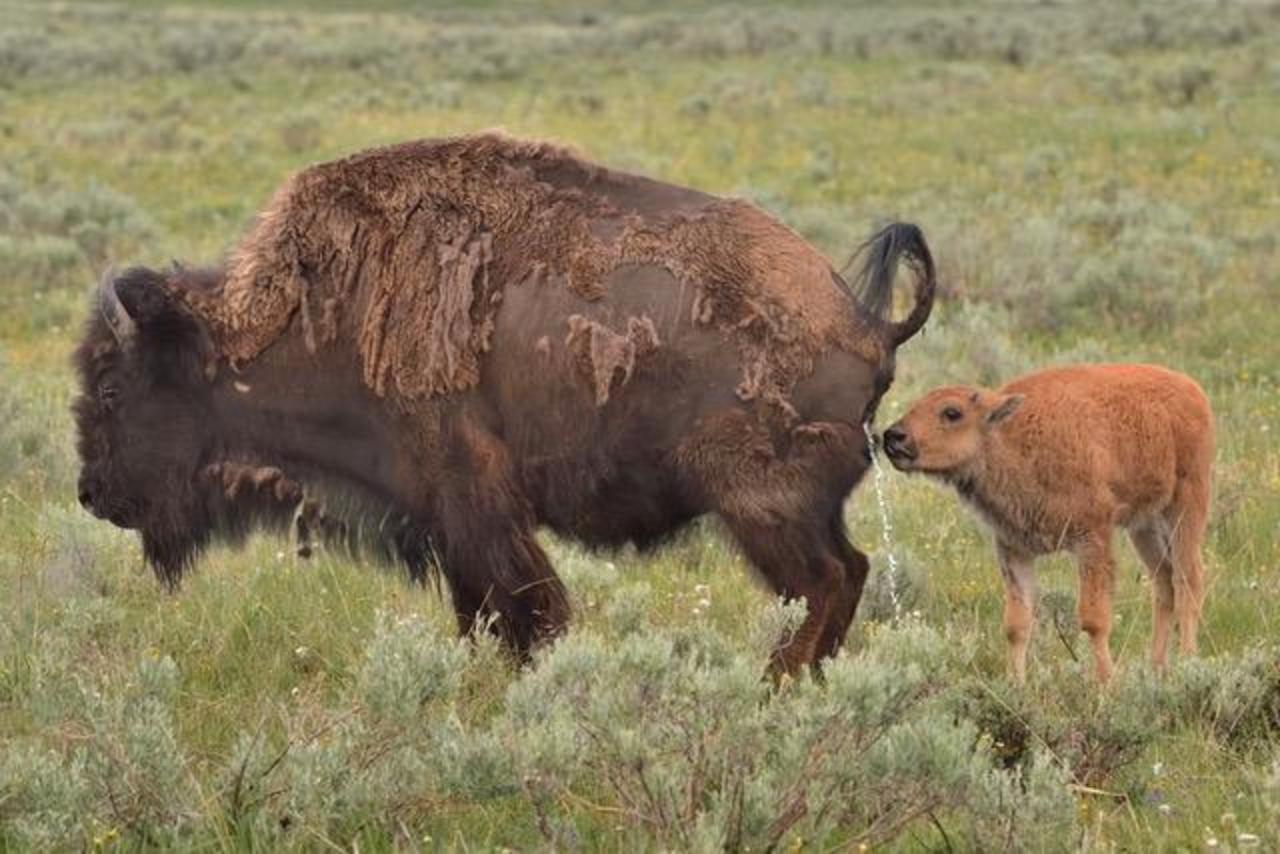 A bull calf of the year smells his mum's pee. 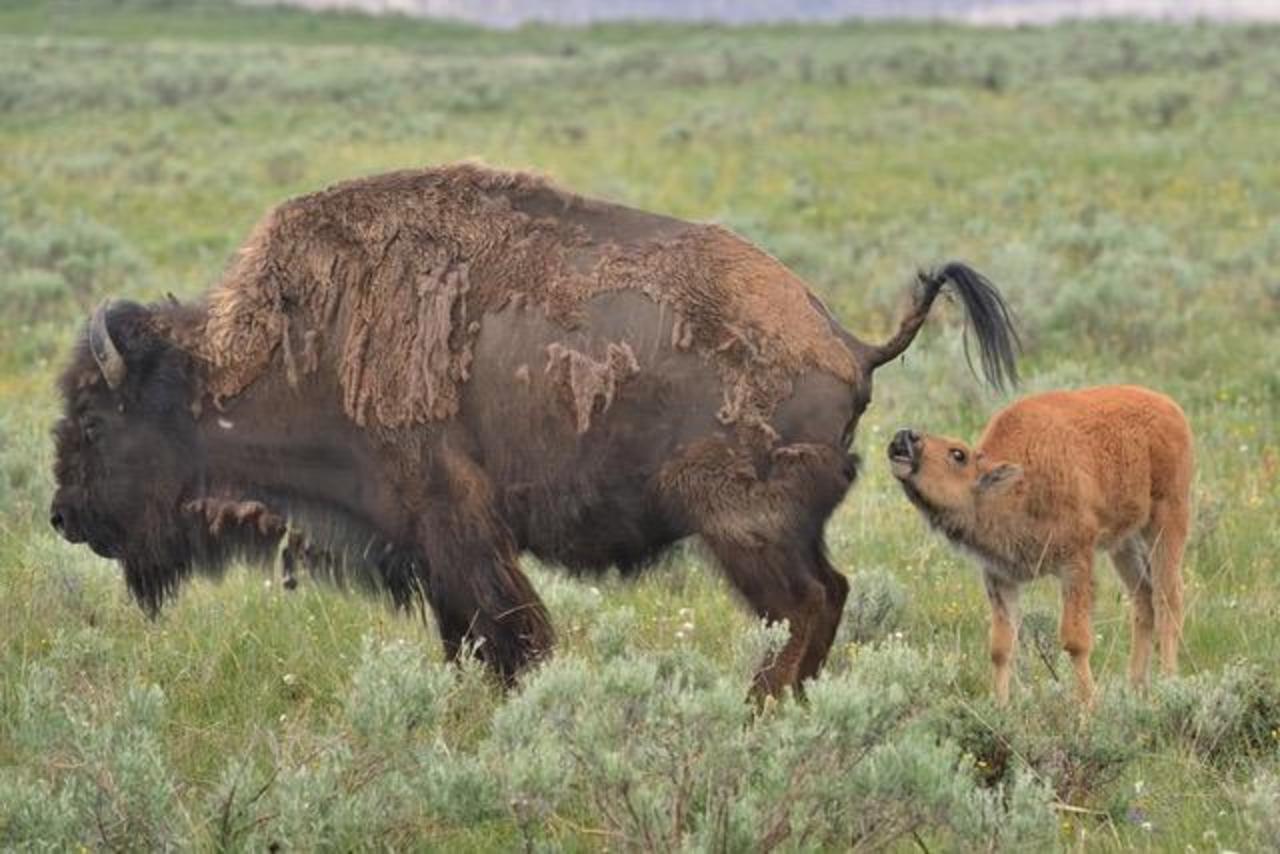 The cow's urination elicits a lip curl, a male bison's rut response behavior to check if a female is in estrus, even in her recently born bull calf.

There is a collective excitement this early summer morning. Grazing has been good on green grass now rapidly drying from the heat. With the abundance of food, winter ribs have receded as the body mass lost in winter has been restored. And the enlivened prospect of the summer rut hangs in the air. 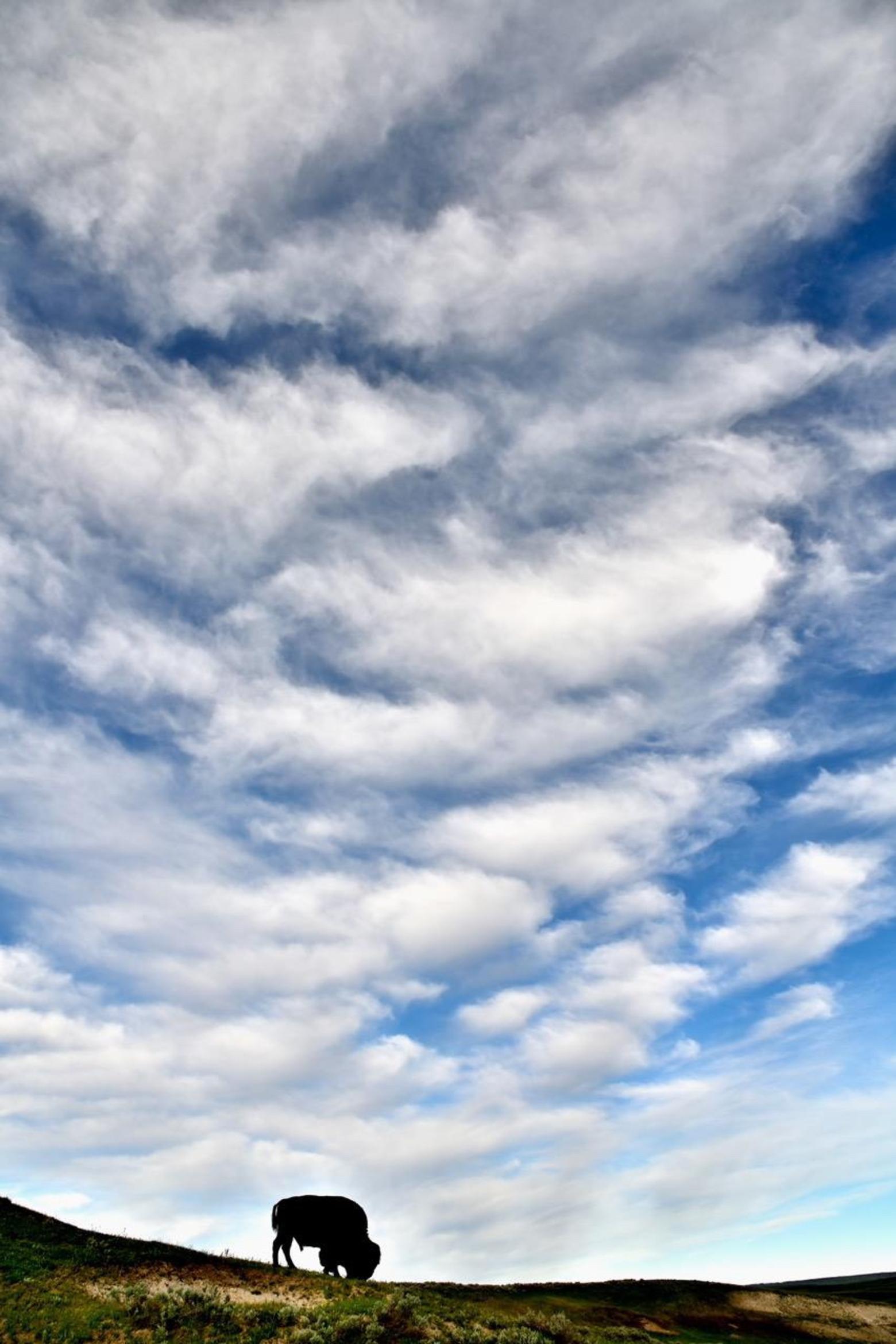 The panoply of clouds each day is a commentary on the nuances of the day's seasonal weather here on the Yellowstone Plateau. 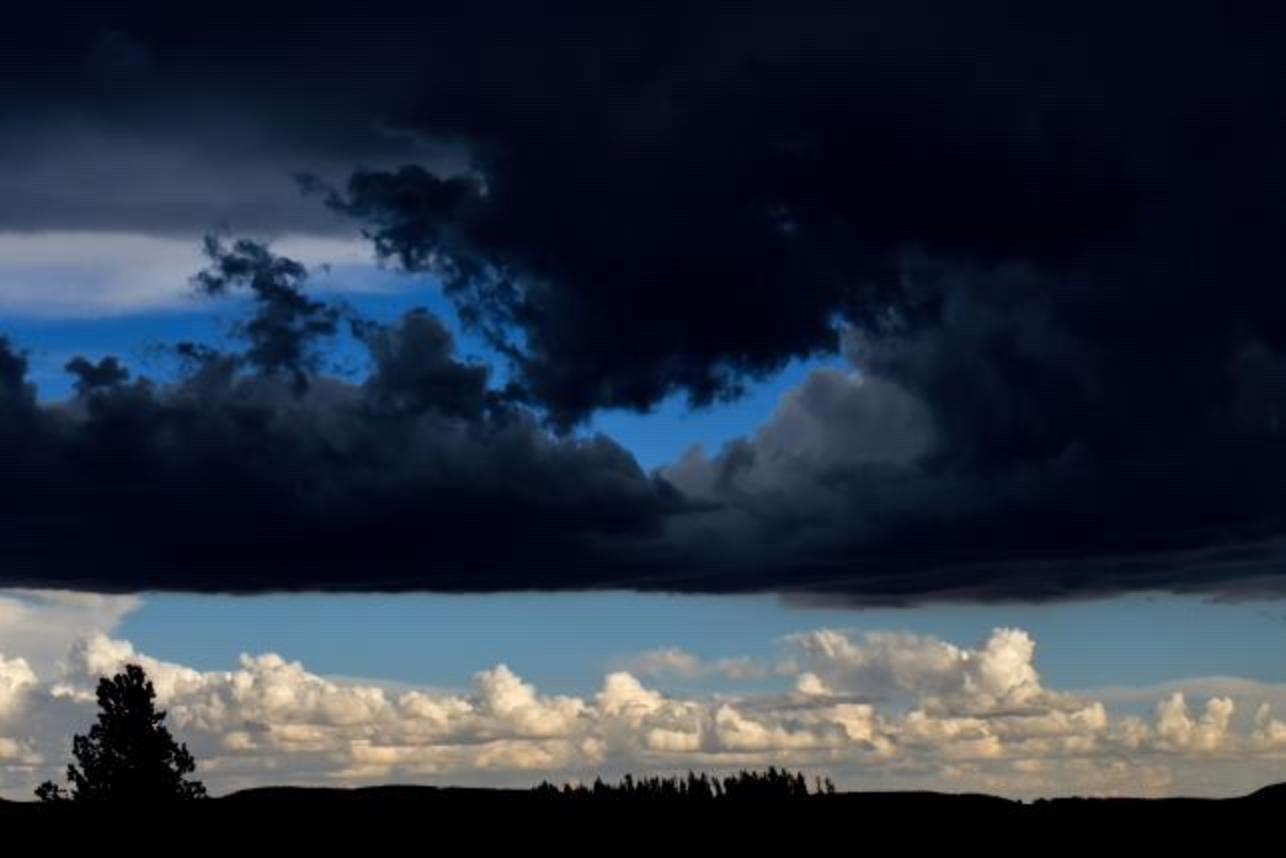 This sky may look like two photos overlapped but no, it's a dark micro cell passing as an expression of the Yellowstone Plateau's dramatic summer skycap. Summer cells often cast lightning strikes like Jovian warships bombarding the landscape, sometimes sparking wildfires which becomes a growing risk as summer wears on. 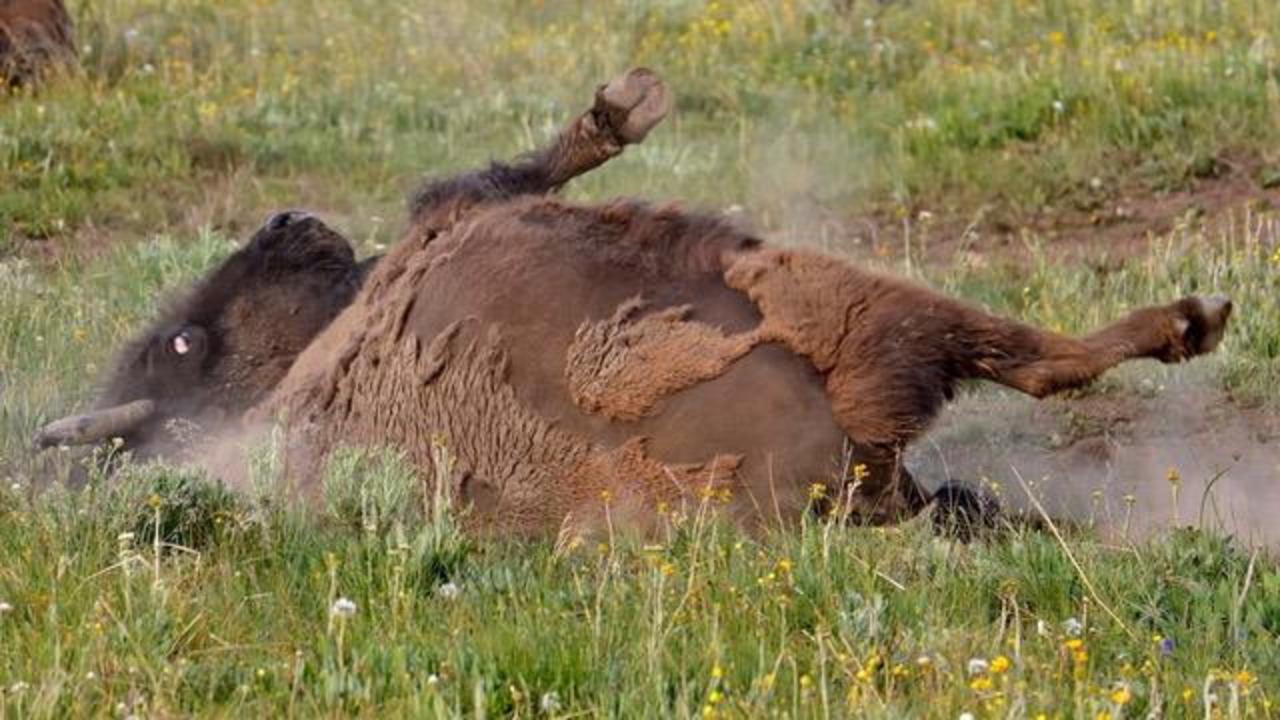 A good flop in the dust gives a cow bison some relief from the itch of shedding heavy winter coats and the irritation of biting summer insects. Soon, bison bulls will be wallowing too as part of the rut. 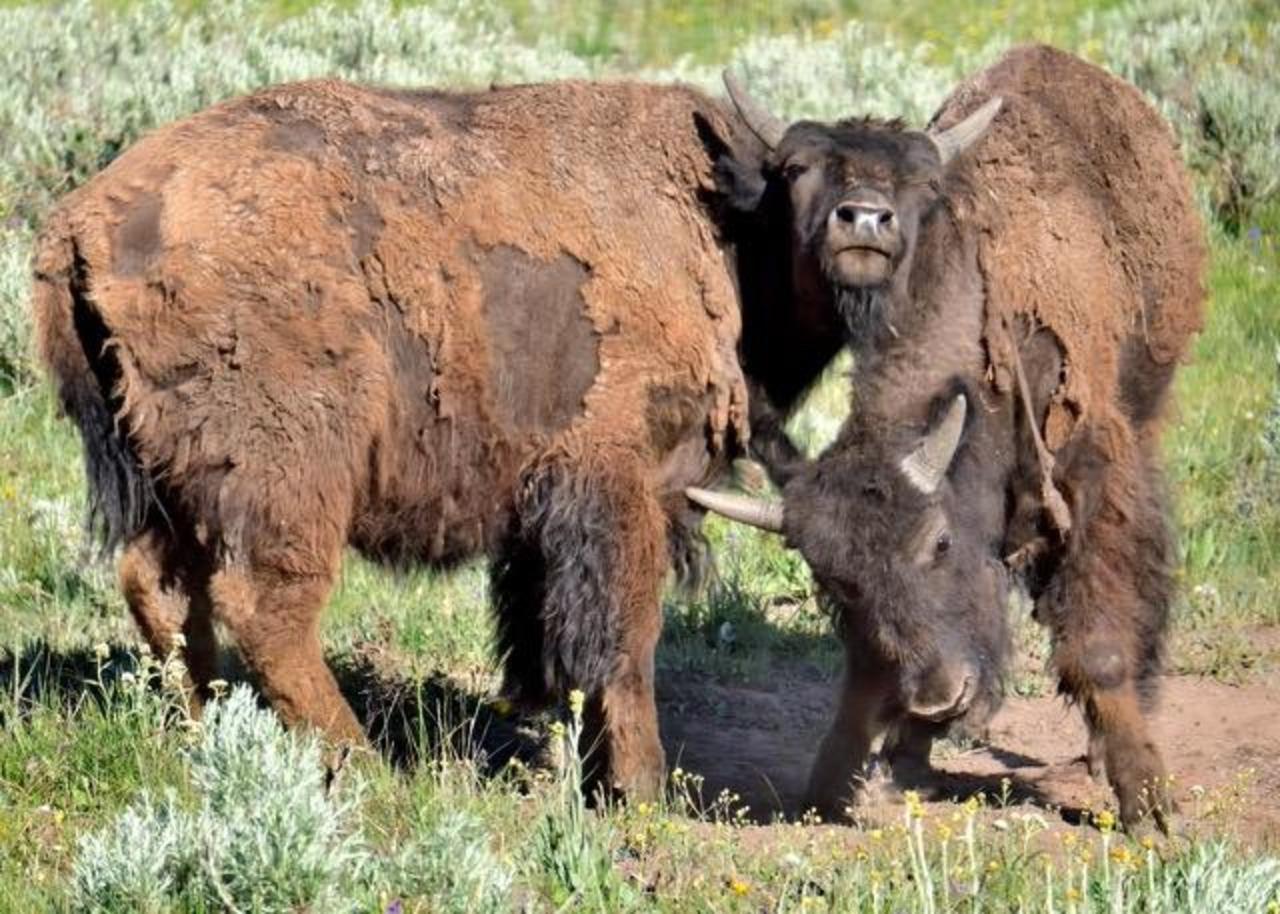 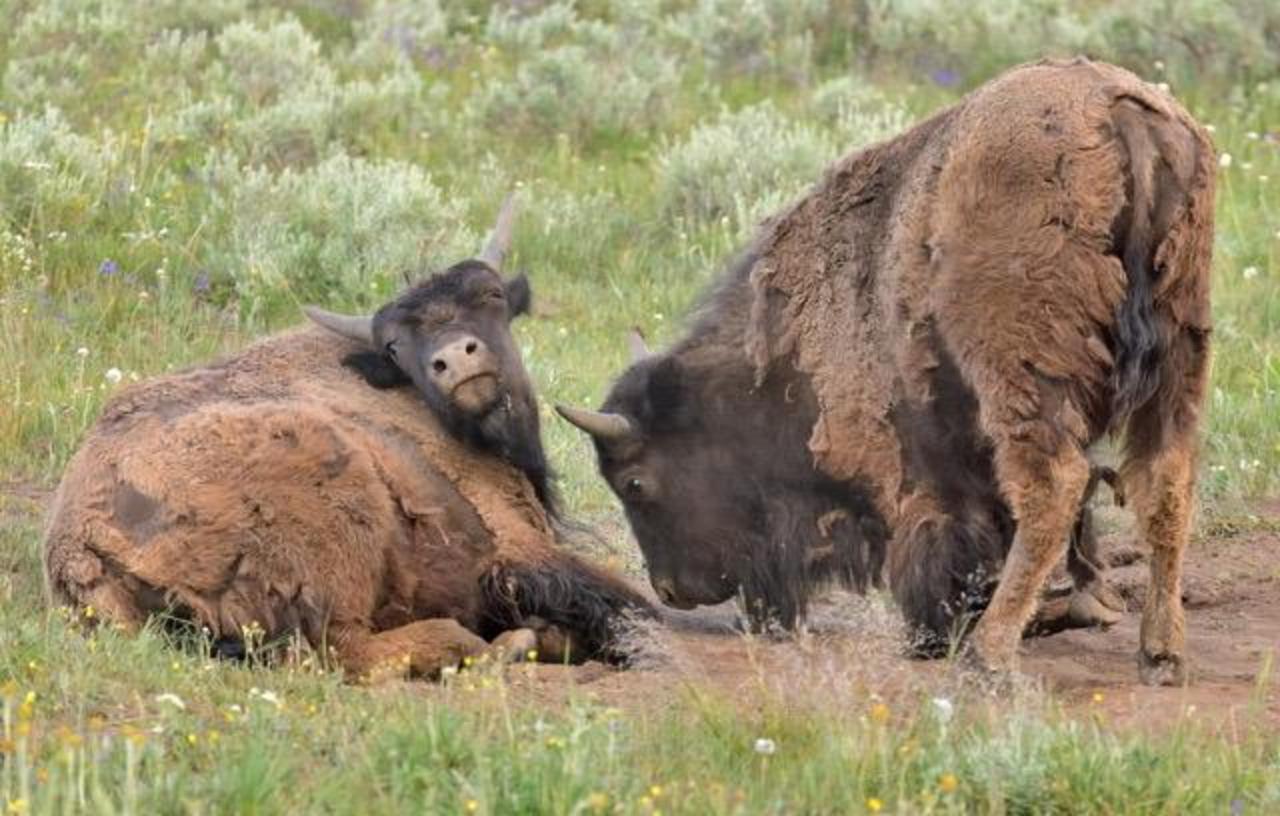 This and two photos above: Juvenile companions, like people in childhood, have youthful summers nuzzling, wrestling, learning and emulating their elders. Here in the Hayden it's hang-out time and enjoying a dust roll. 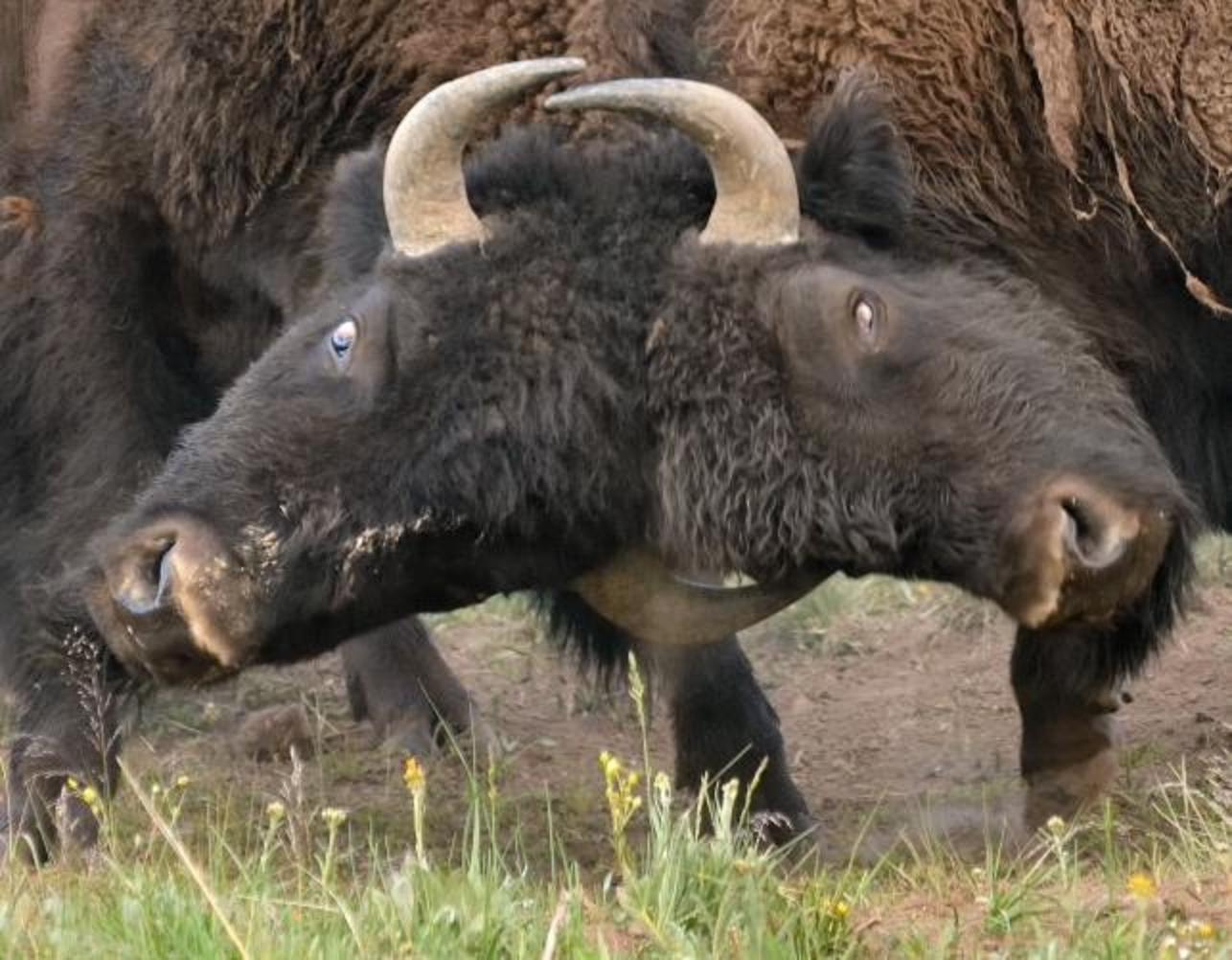 A couple of young bulls working out the prep for the buffalo breeding olympics to begin. An opportunity to plant their genes is still years in the future. When and if they live long enough they will have the mass and aggression to compete as a member of the apex of the heavyweight breeding bull elite. 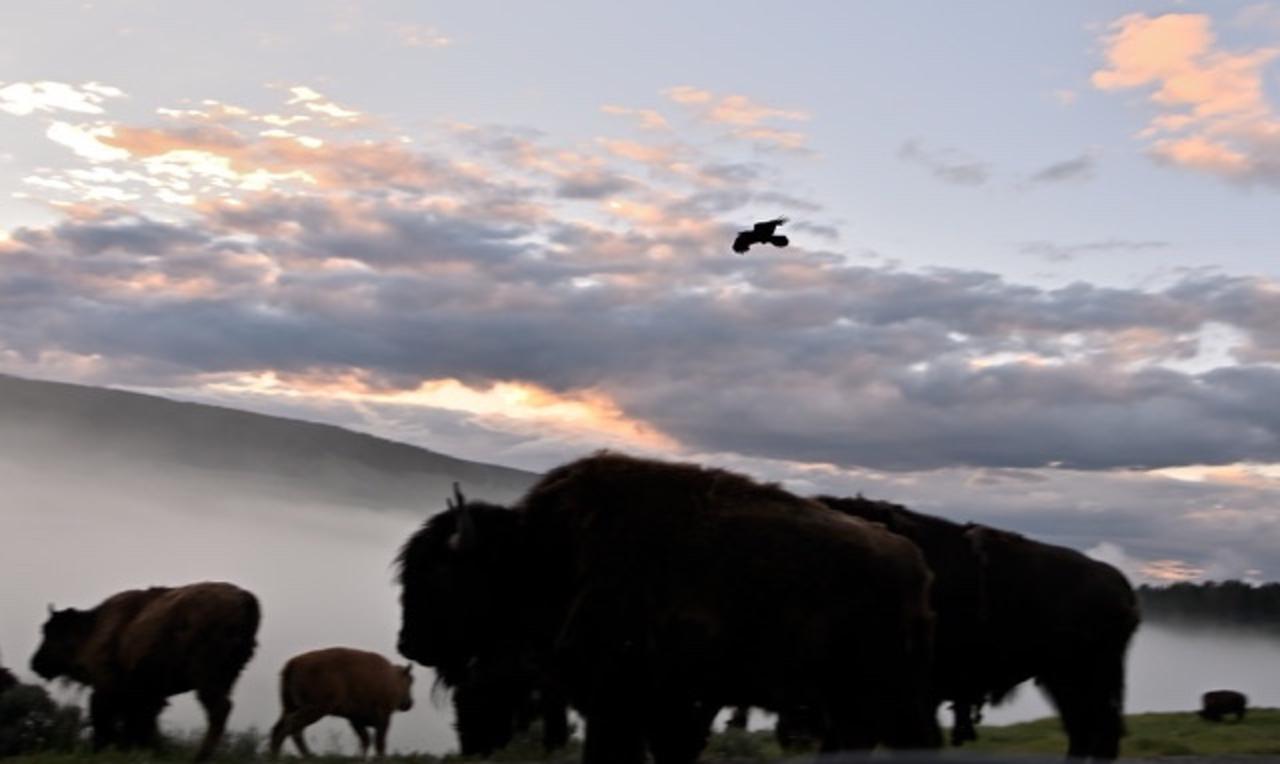 It's sunrise and ravens are always about. Overnight mist has risen over the Yellowstone River and lingers in the pre-sunrise cool. 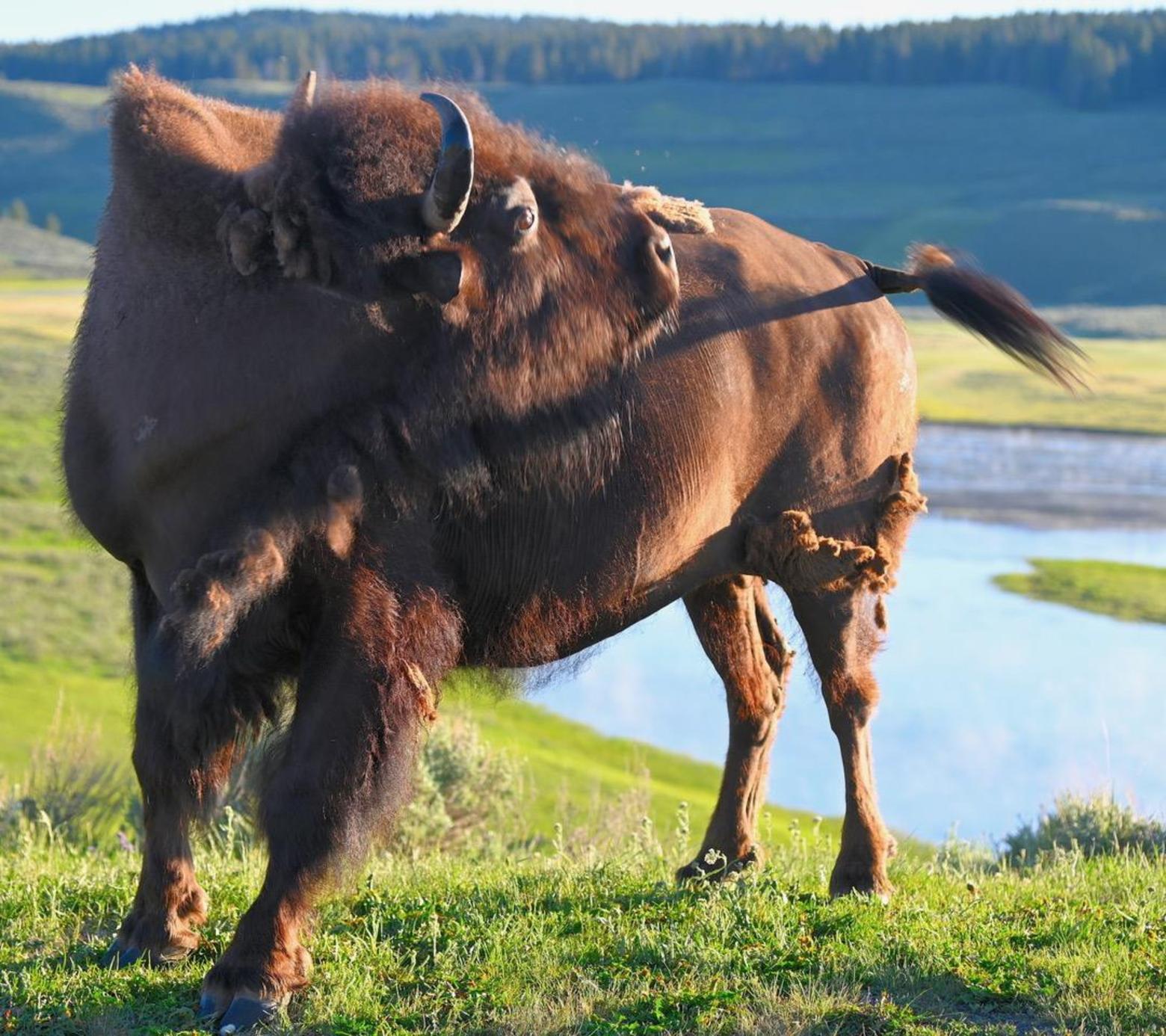 A handsome alpha cow, she has seen a lot of seasons and years and is the reservoir of memory and wisdom for members of her extended matrilineal band. 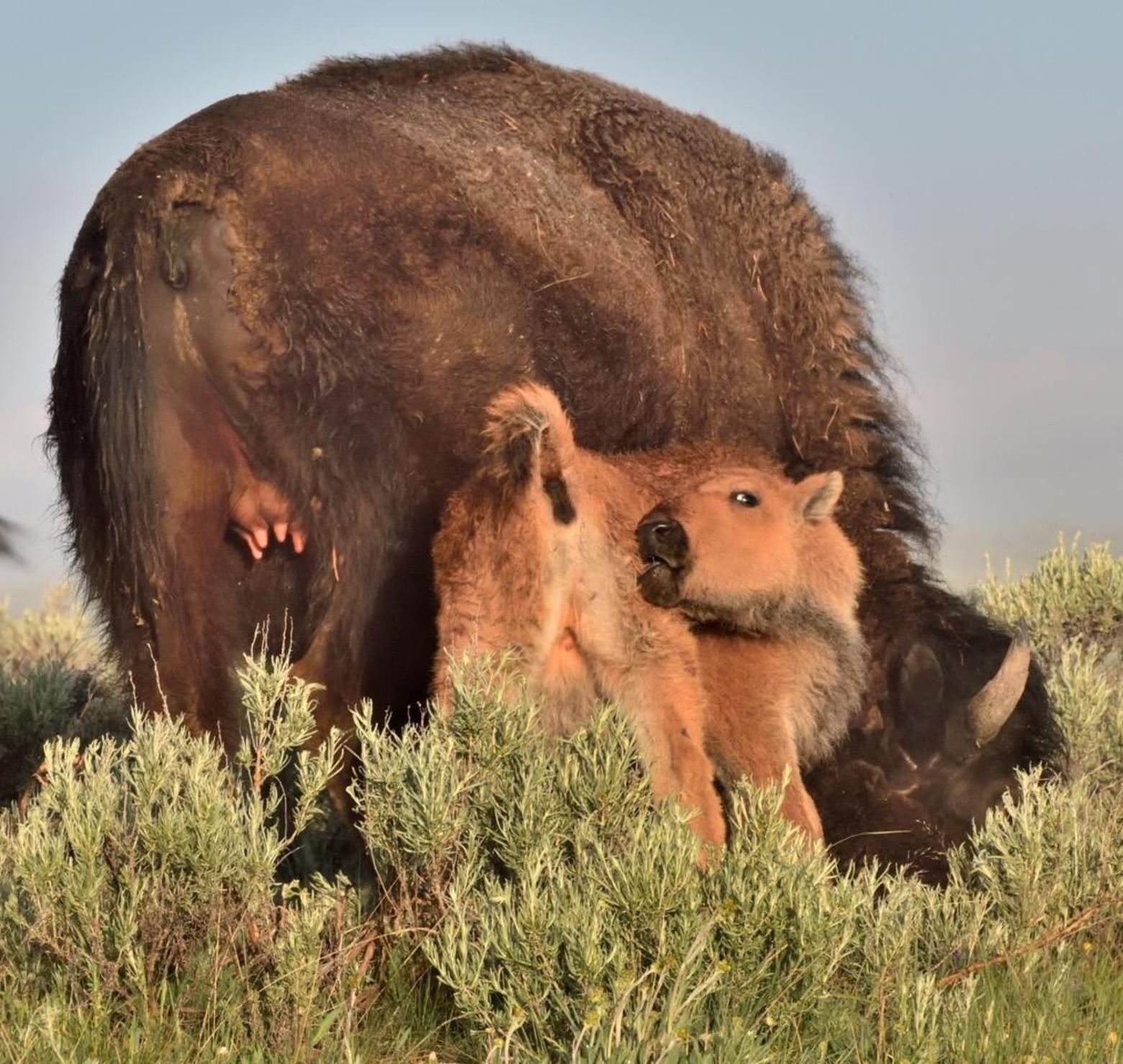 Four teats provide mother's milk and she continues to be the source of life since this calf's embryo was implanted last year. 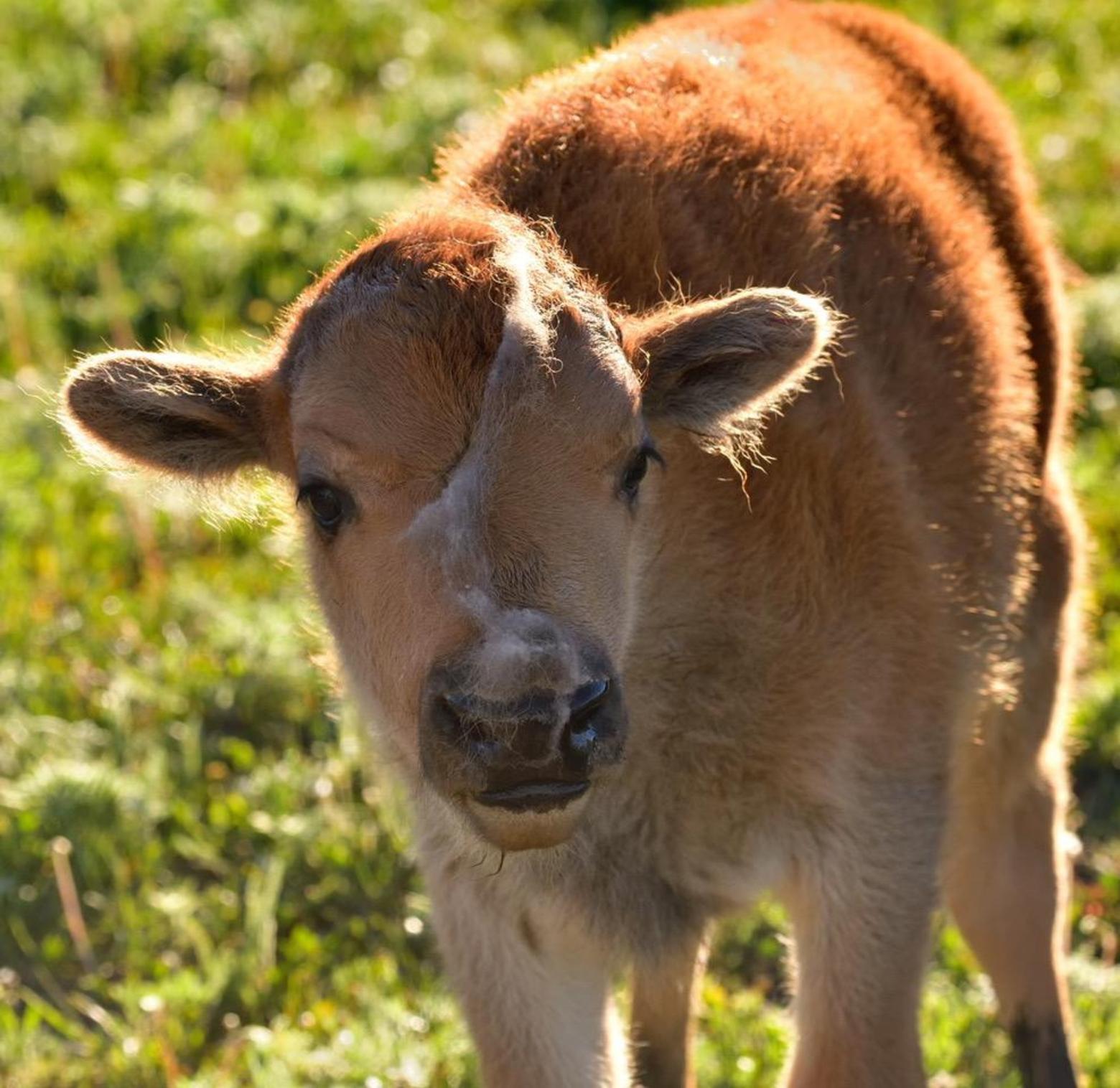 After nursing happily, the calf's face has a streak of mother's milk.
EDITOR'S NOTE:  Make sure you never miss a MoJo story by signing up for our free weekly newsletter. Click here: https://bit.ly/3cYVBtK