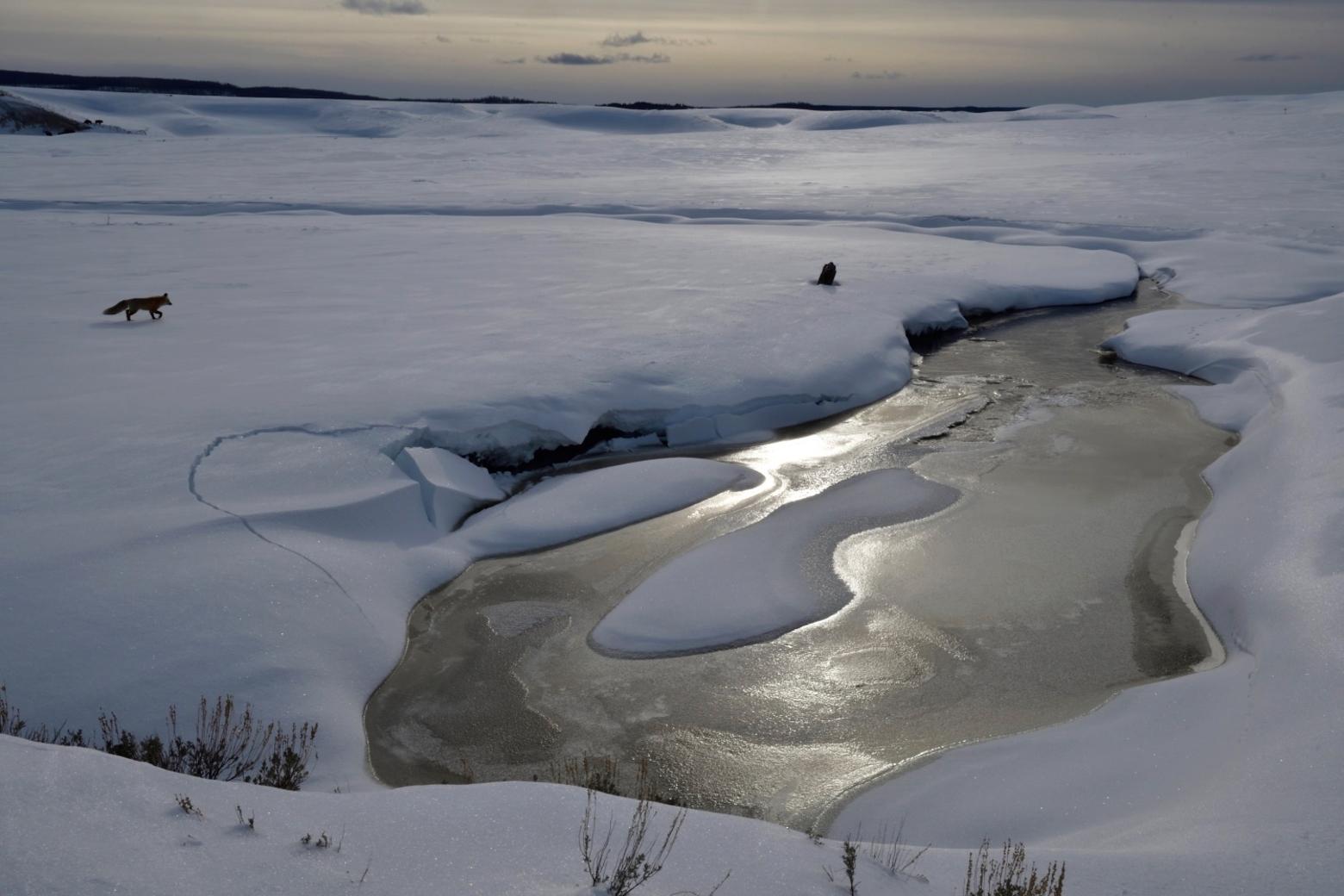 Late in the day before the storm came. Do animals know that it's time to stock up? The fox is intent on something moving around the stump. Whatever it was she ate it. In the far distance, to the left, two buffalo graze on a windswept ridge. All photos (c) by Steven Fuller 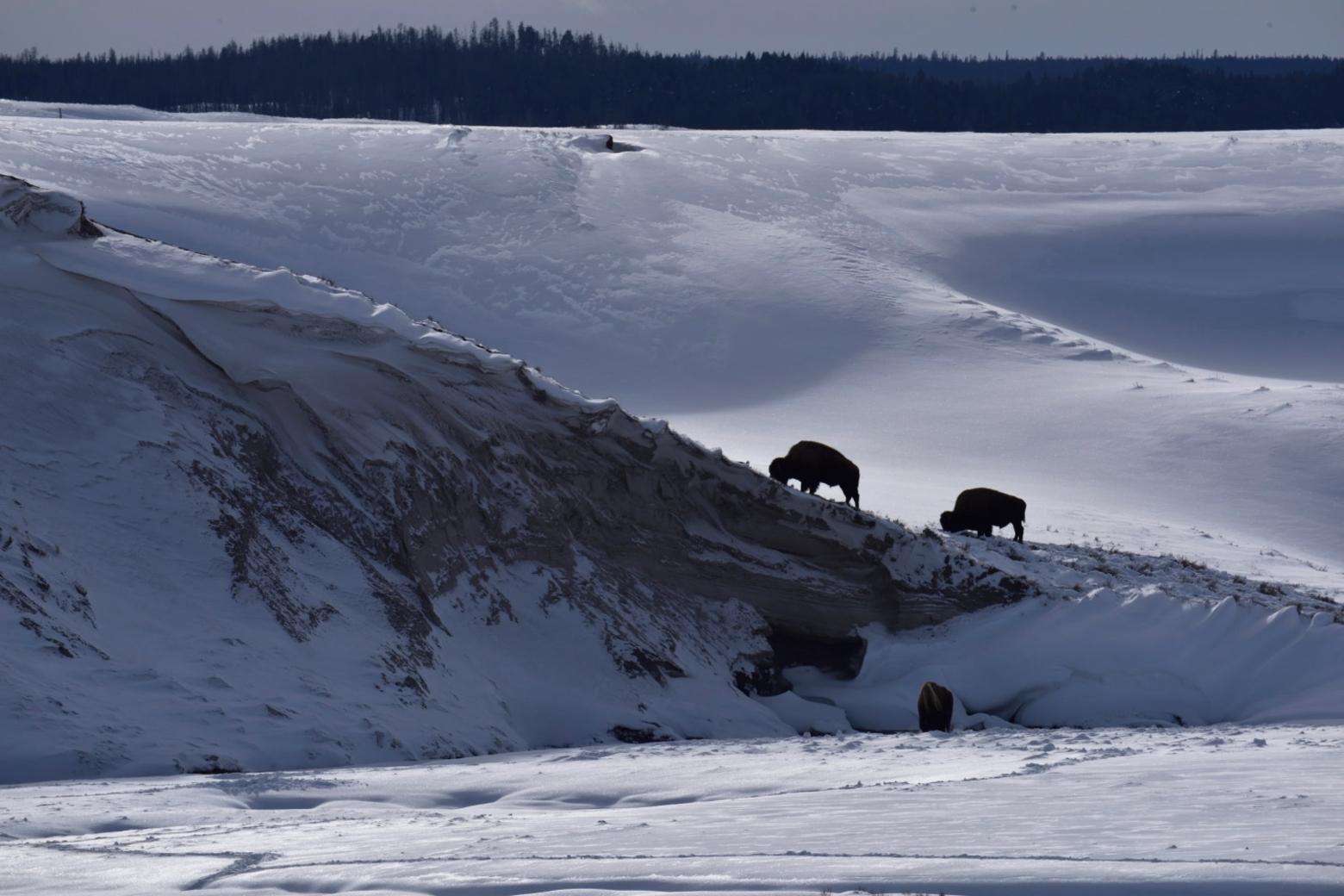 With 46 inches of snow on the ground and wind drifted cornices many times deeper, these bulls have moved onto windswept ridges. The graze is poor, but they avoid burning energy plowing through deep snow to get at the graze below. Whatever their strategy by this time in the winter they are burning more energy than they are taking in. The equation will kill some of them before spring. 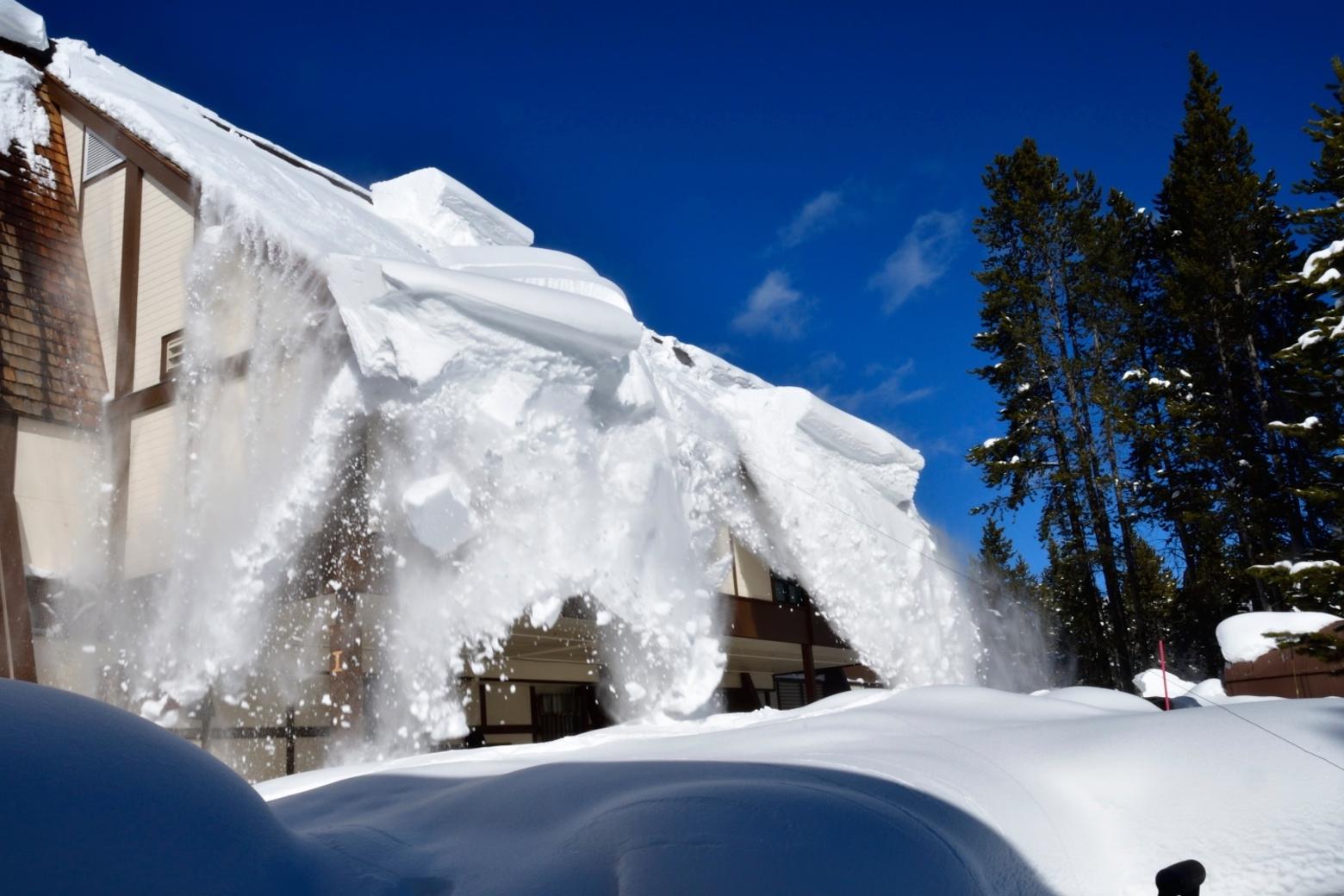 Knowing a strong storm was on the way I wanted to clear this snow loaded roof before the weather hit. The roof is way too steep to clear with a saw and shovel in the traditional fashion.  So, up on top, I cut a curf with my snow saw the length of the roof ridge, then set a loop of wire down in the cut. Next, I dropped each end of the wire down to the ground.  With one end of the wire secured to a “dead-man” I pull the other end of the wire closing the loop releasing the snow mass from the roof. 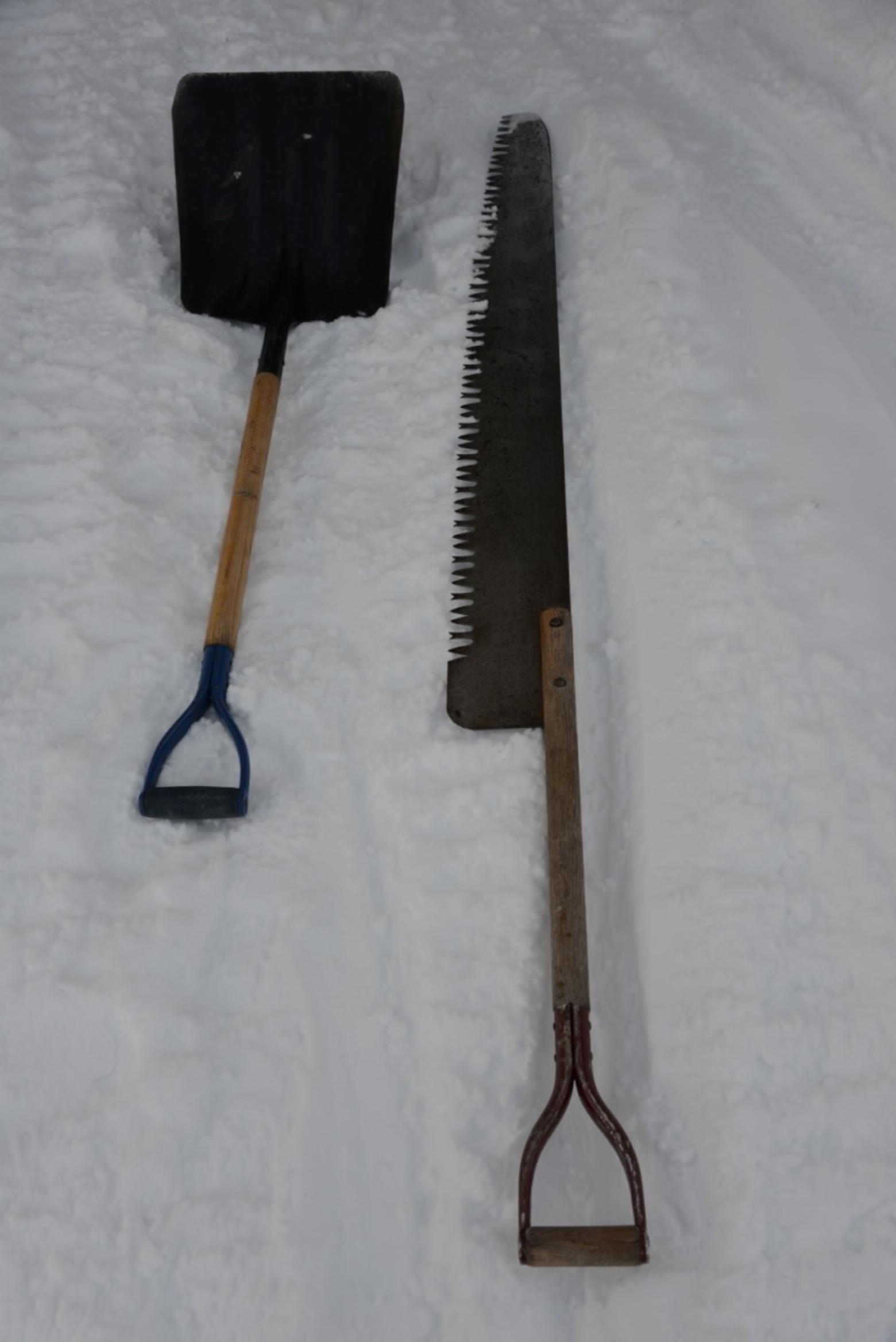 The winterkeeeper's humble tools of the trade. No snowblowers are taken up on a pitched roof. 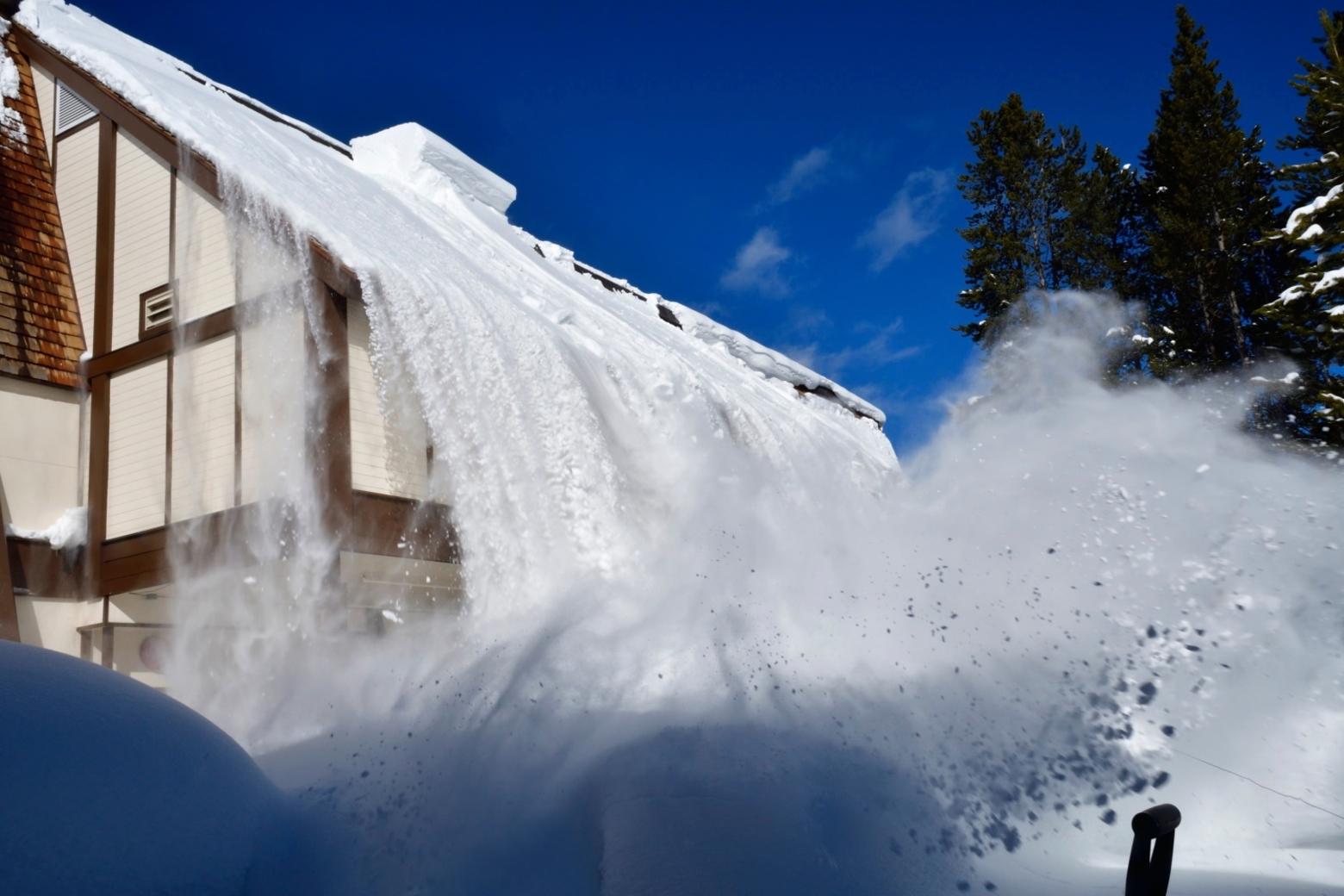 The goal is to set off a controlled slide and stay clear. Unfortunately, in this case, there is a “hanging chad”, where a part of the cornice on top hung up. This will be a problem when next I wire the roof.

Hunkering Down For The Deluge 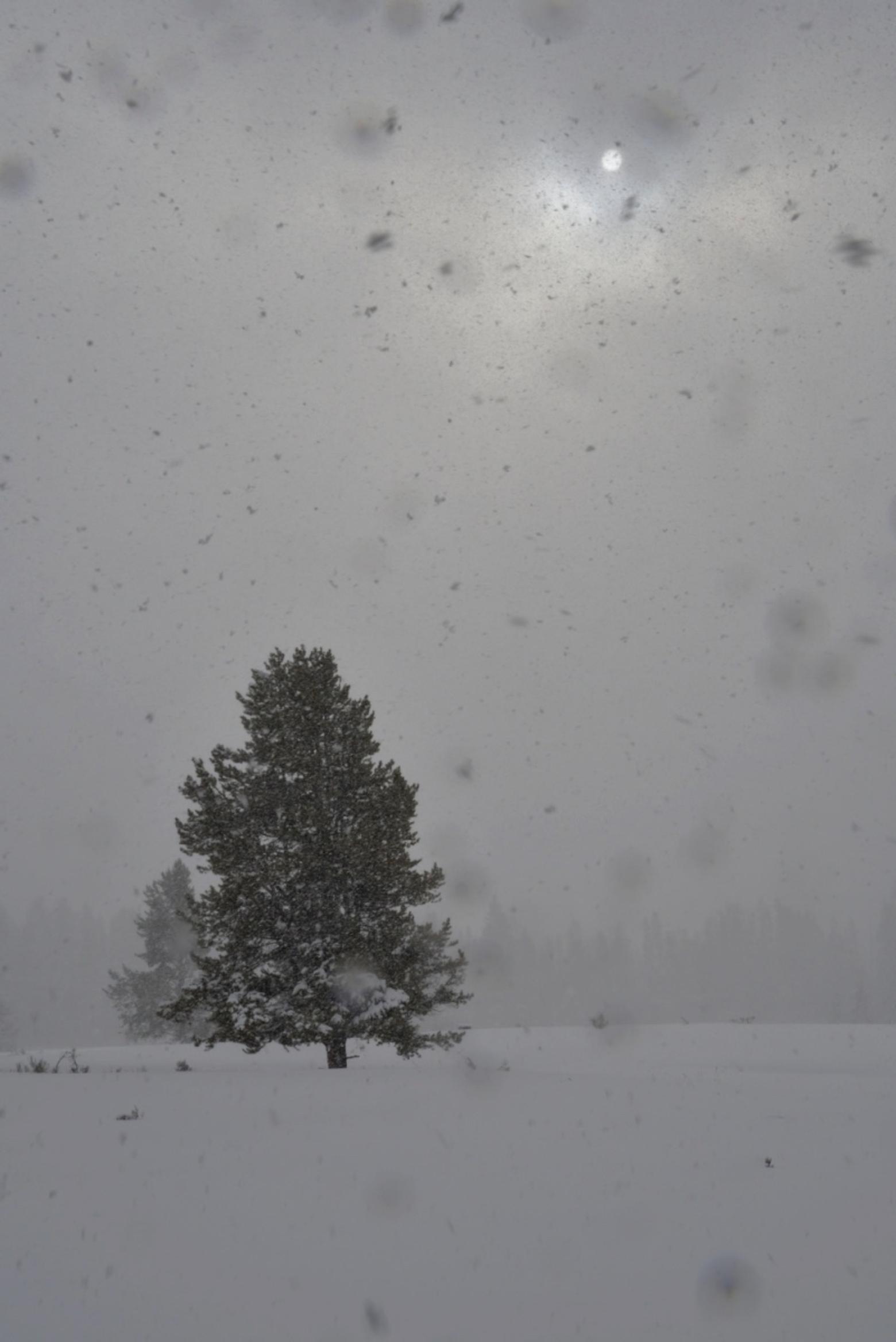 That afternoon it began to snow. A glimpse of the sun in-between storms; light soon to vanish. 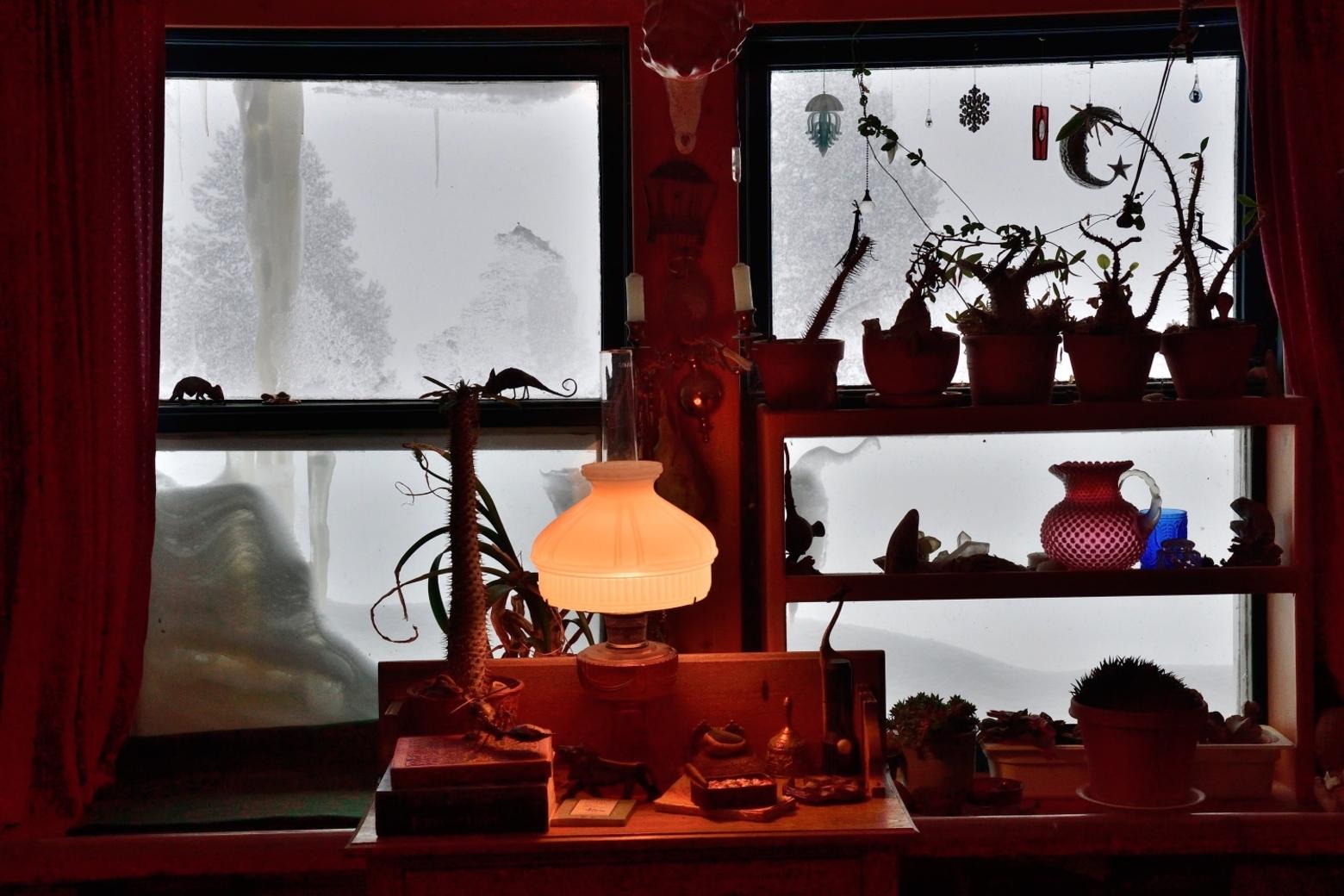 That night the house shook with the wind and occasionally a dusting of little snow crystals came in through my open bedroom window and drifted onto my face, pleasant tingles. 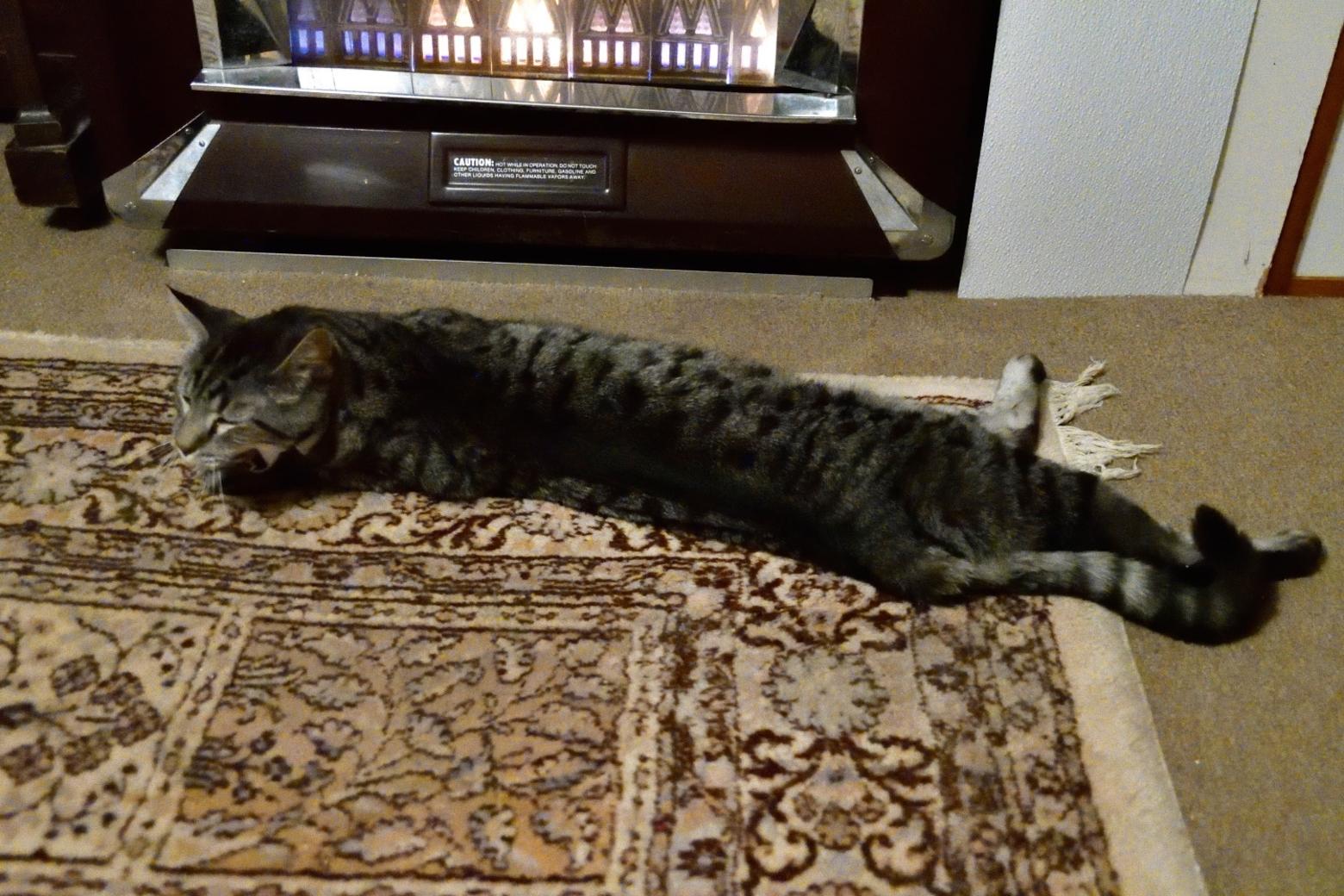 Unconcerned the cat, Tiger, napped at the stove.

Digging Out, Awaiting The Next Wave 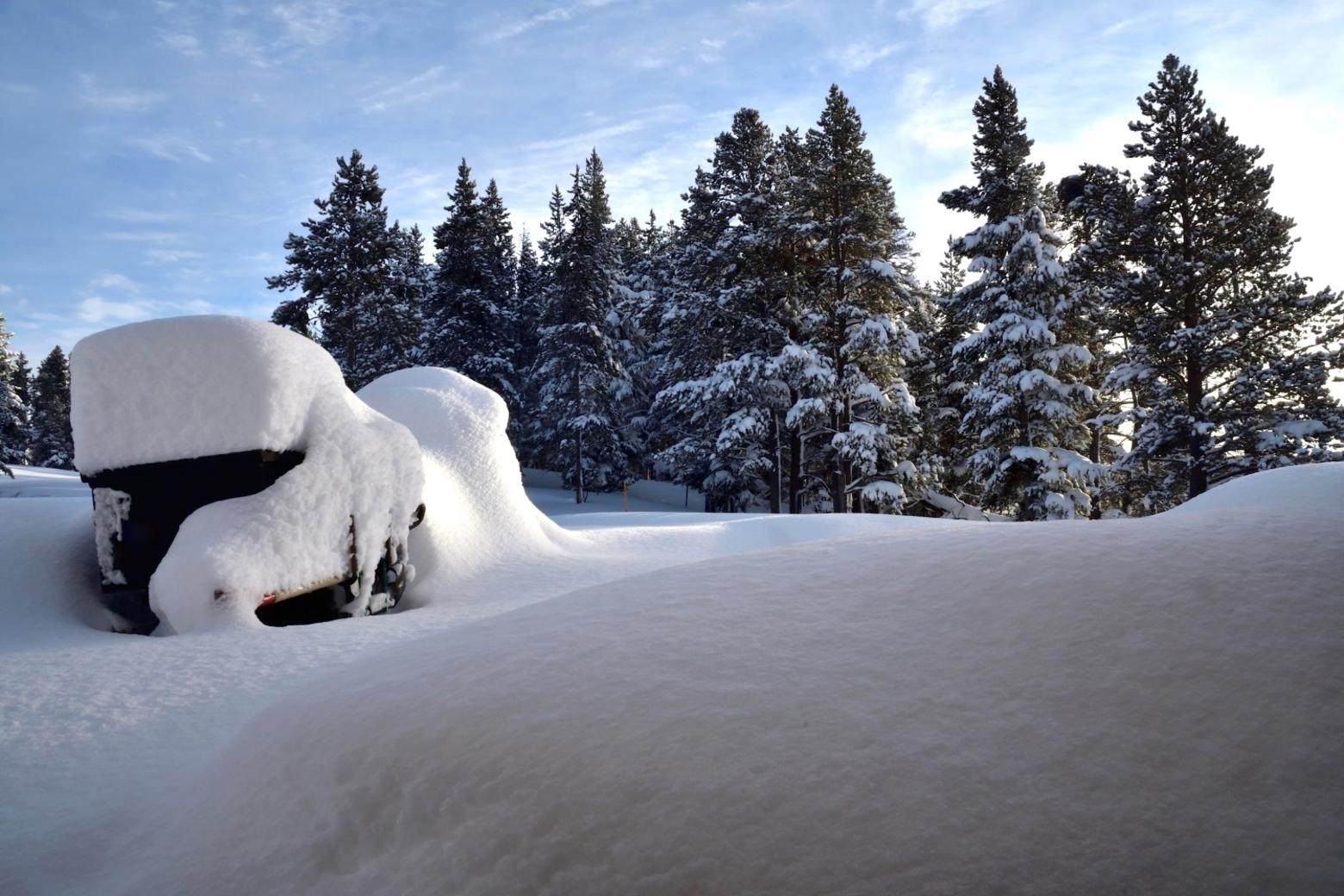 The next morning. Unbeknownst to me, last night’s storm was only a prelude to the next five days. 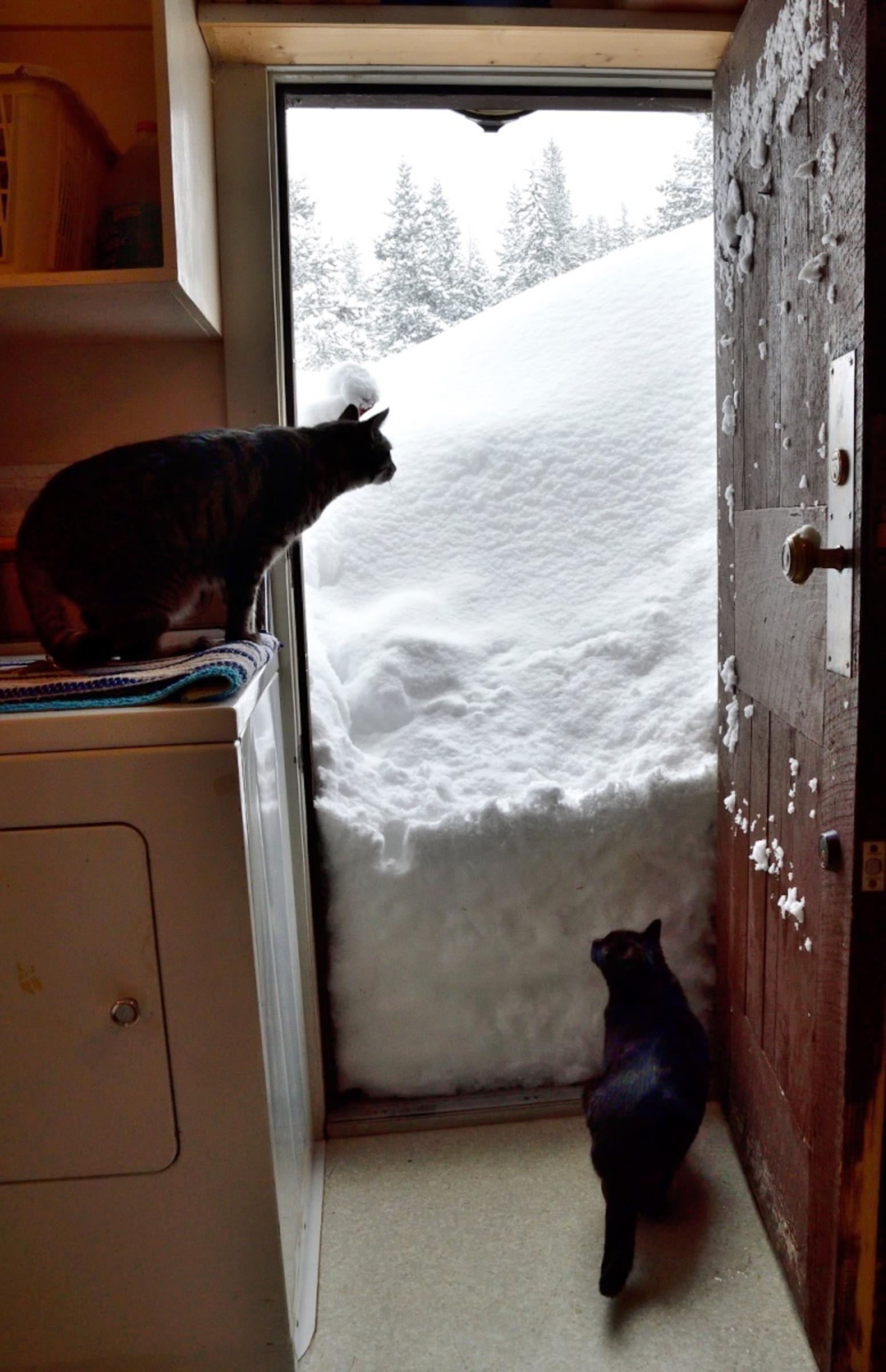 The drift at the back door, my winter entrance, the next morning. There was much more to come. Tiger and Black Girl, permanently confined to quarters, long for the snowy world outside. At the foot of the door were tracks and urine left by a pine marten. 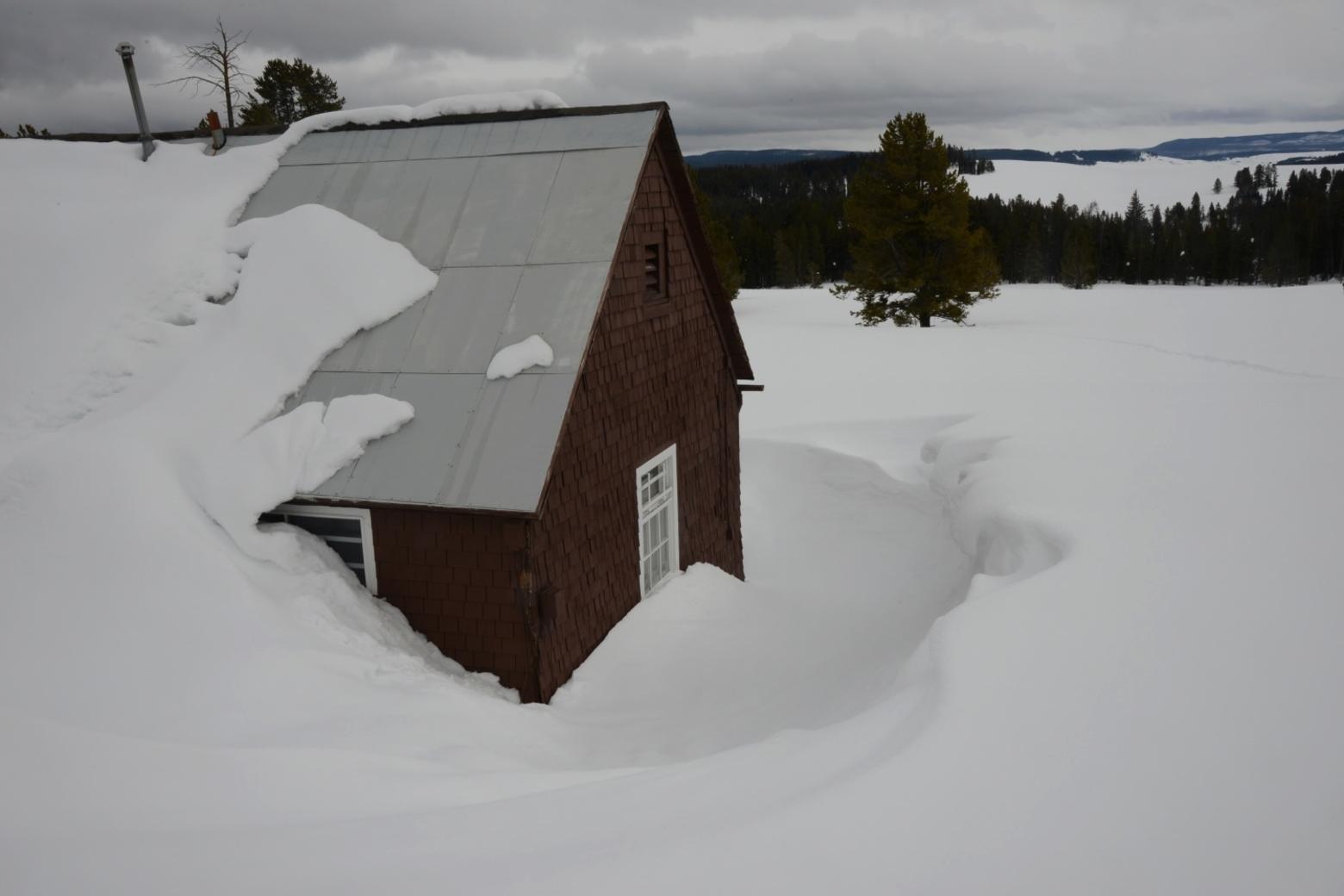 Eventually the storm—this one—passed. And we can only hope for more, nature's insurance against wildfire for now only a notion. 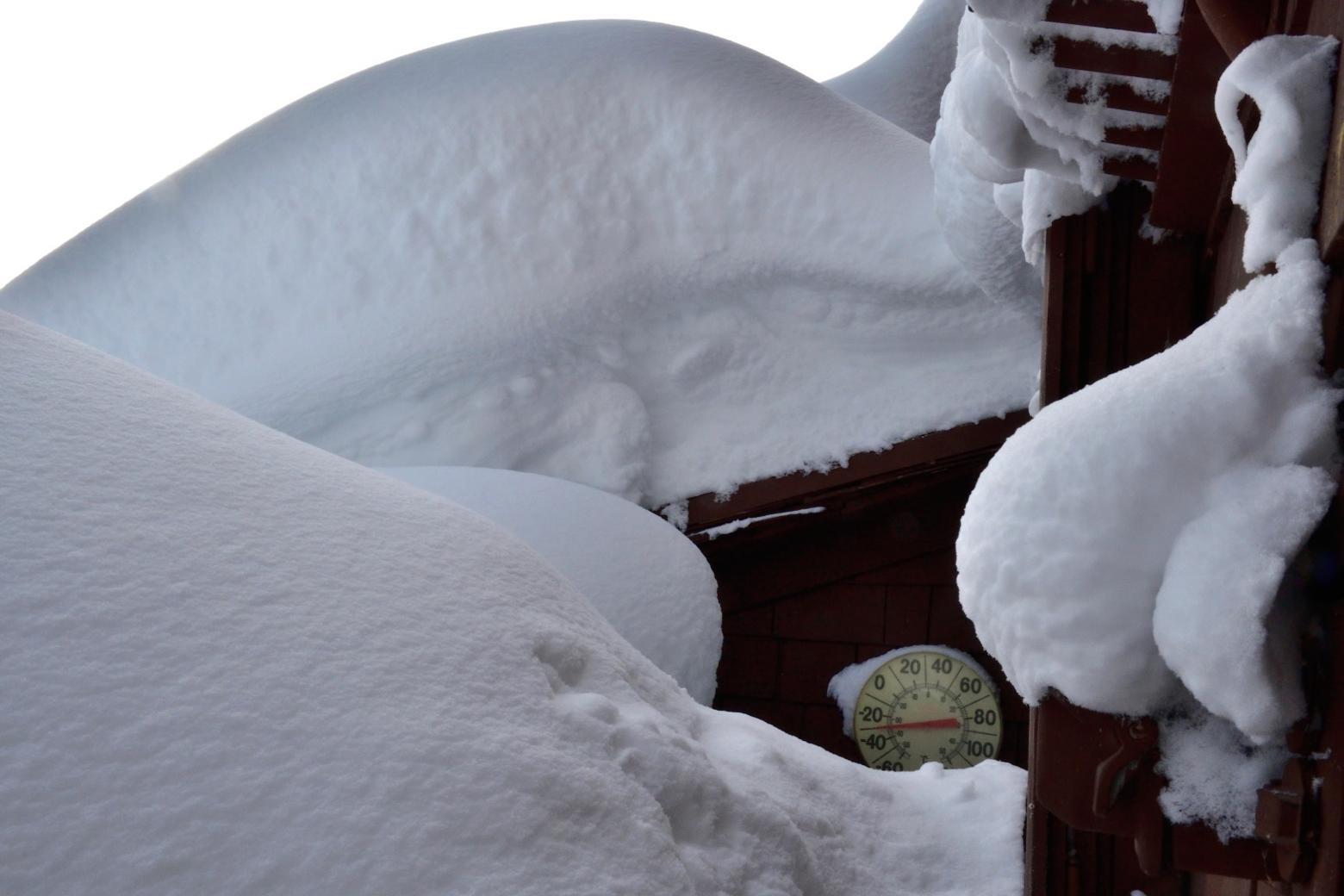 Overnight the temperature dropped to -30 degrees F according to the thermometer outside the back door. I had to stand on tip toes in the doorway to make out the temperature over the drift. I passed the next two days digging up out from the door, excavating the snowmobile, and breaking a snowmobile trail out to the road—all harder than it sounds. There is a lot more winter to come and I am seriously concerned that it will be necessary to put a ladder in the snow hole so as to get in and out of the door. 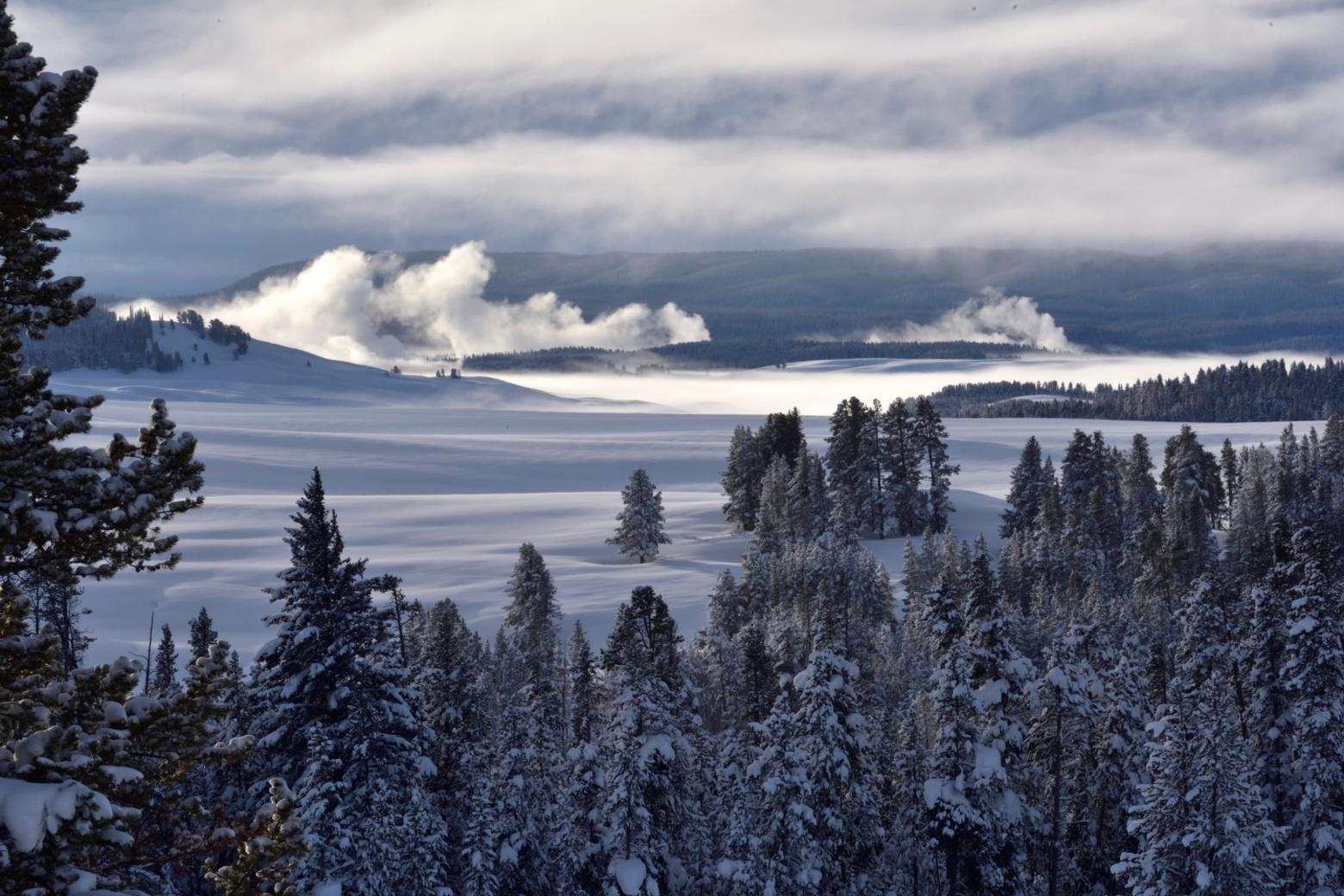 Cold days and nights followed. The view from the front door looking south. After the storm laid down several feet of new dry powder snow and the -20 degrees F cold clarified the air and the secluded world was renewed.

Steven Fuller has been the "winterkeeper" at Canyon Village deep in the heart of Yellowstone National Park for 48 years.  Well traveled on several continents, he is also an award-winning nature photographer.  Follow him at A Life In Wonderland appearing exclusively at Mountain Journal.  His collectible photography is available through Fuller directly. This profile photo taken by Neal Herbert/NPS
Read more
Increase our impact by sharing this story.

GET OUR FREE NEWSLETTER
Never Miss A Big Story!