Back to Stories
Culture, Wildlife 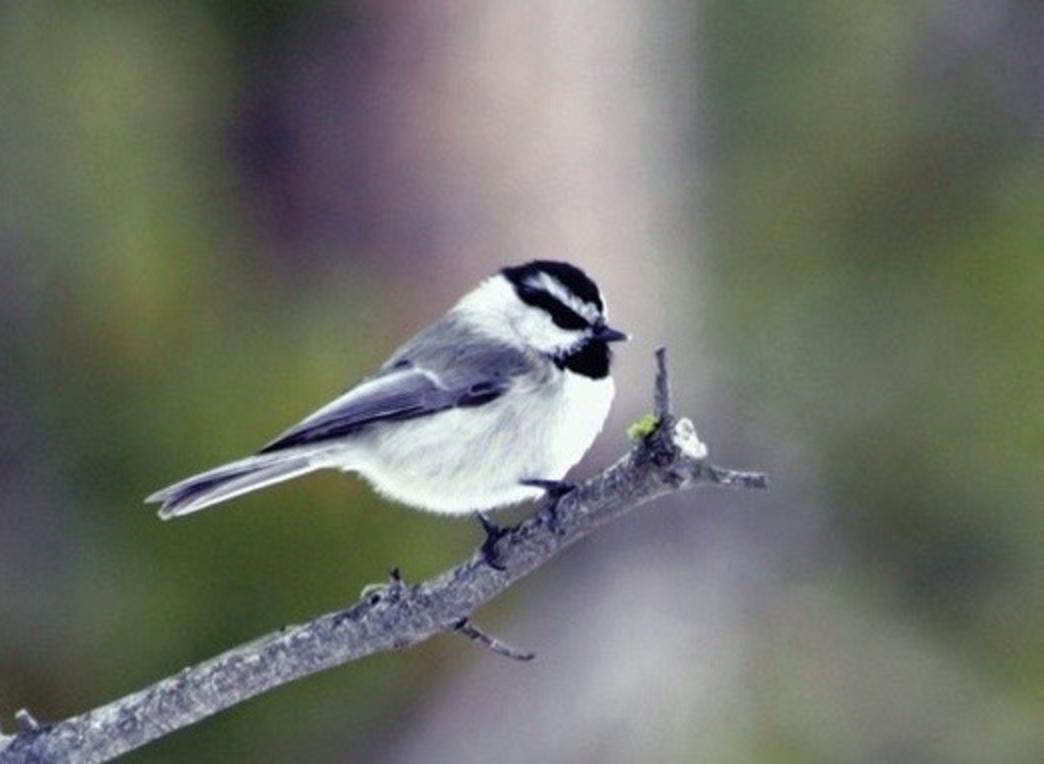 Chickadee Photo courtesy NPS
Frigid air hit my face with a sharp blow when I stepped out of the truck. Beyond a wickerwork of bare cottonwoods the Snake River exhaled steam like a long, lazy geyser. Mounts Hunt and Prospector loomed, flocked with rime. The Grand Teton stood like a tall white pillar beyond.
For the next six hours my husband Don and I would wander the willow bottoms and sagebrush parks, dark runs of forest and patches of aspen that comprised our assigned area for the Jackson Hole Christmas bird count. While Don put on his snowshoes, I recorded data in my field book. 9 a.m. Conditions: calm, thin haze, ten below. I pulled on a wool hat and snapped the collar of my parka tight.
The sun cleared the cottonwoods along the river as we shuffled through wind-crusted drifts. We kicked our snowshoes high, as much to keep blood moving to our toes as to clear the slabs of snow. Every few minutes I stopped to listen, but I heard only the scrape of hair against the collar of my nylon parka and the surge of blood in my temples.
A loud chirp stopped us and we looked up to catch beats of flashing black and white. The crow-sized bird dipped low and landed in an aspen snag, turning against the chalky bark of the aspen to display a bright red patch on the back of his head. I gripped the pen in my thick wool mitten and scratched out Hairy Woodpecker in my notebook. With a sharp chirrup, the woodpecker swooped away. 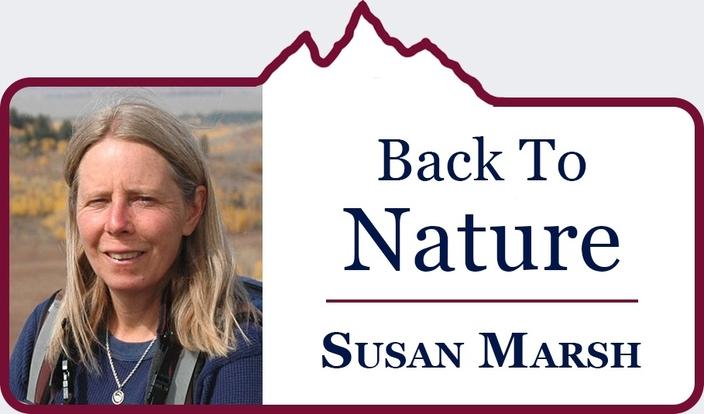 We contoured toward a row of heavily branched Douglas firs, where nuthatches and chickadees flitted between the trees. After recording them we stopped to refuel. When I opened my bright blue stuff sack a chickadee dropped out of the sky and landed on a ski pole. Another hopped along the log where I sat and peered into the bag. For a minute I thought it was going to climb in. Clearly these birds had seen a human’s lunch before.
What I did next wasn’t legal. I crumbled a pecan into my palm and held it out. The ski pole chickadee fluttered into my hand. Its tiny clawed feet danced down my finger as it sized up the offered bits of pecan. It seized the largest of them and whipped away.
I shivered with delight at the touch of nearly weightless bird feet. Though there was no doubt the chickadee had only one objective, I felt flattered. Usually, when humans approach, everyone from chickadees to bears hurry away. Close contact—much less touch—is rare, and never at the choice of the wildlife. I’d field-dressed elk and rescued birds that hit the window, but when was the last time a wild creature voluntarily came to me?
° ° °


It was easy to understand why they might not want to. The Christmas Bird Count wasn’t always the benign expedition it is today. Prior to 1900, people engaged in a holiday tradition known as the Christmas Side Hunt. They shot everything that moved, and whoever came home with the biggest carcass count was declared the winner.
We can thank an ornithologist for the change. In 1900, Frank Chapman proposed a new Christmas tradition, a bird census. He and other birders organized twenty-five counts that year, most of them in Chapman’s home region of New England.
Fast-forward to the 117th count, which took place a year ago. A record number of counts were submitted to the Audubon database—2,536 from across the U.S., Canada, Latin America, the Caribbean, and Pacific Islands. Over 2630 species were recorded, up from the 90 that Chapman and his small crew tallied.

Fast-forward to the 117th count, which took place a year ago. A record number of counts were submitted to the Audubon database—2,536 from across the U.S., Canada, Latin America, the Caribbean, and Pacific Islands. Over 2630 species were recorded, up from the 90 that Chapman and his small crew tallied.

The count grows every year, even when the weather would keep most of us indoors. This year, as the 118th count comes to a close, our local contingent of counters was 60—a lot for a small town with plenty of other things to keep people busy on a Saturday morning.
People join the count because it’s fun, educational, and they are contributing to one of the longest-running citizen science projects in the world. The compiled information can tell us the health of bird populations, how and where they move from year to year, and which areas are of critical importance for winter habitat. This long-term information base informs strategies to protect birds and environmental issues that affect people as well.
With climate change on our doorstep, a hundred years’ worth of information will provide a much needed trend line to envision what could change. The Audubon Society has published the first study that predicts the potential effects of climate change on birds. Using Christmas Bird Count data and other information, Audubon’s 2014 Climate Change Report looks at 588 species of North American birds. Of these, more than half are likely to be in trouble if habitat loss and climate change continue their current trend.

Using Christmas Bird Count data and other information, Audubon’s 2014 Climate Change Report looks at 588 species of North American birds. Of these, more than half are likely to be in trouble if habitat loss and climate change continue their current trend.

I have been the compiler for the Jackson Hole bird count for 11 years. In addition to sending our reports to Audubon, I keep a running total of bird species and numbers seen over the years. Since our count began in 1970, we have a pretty decent record.
Though weather and number of counters explains much of the variation over the years, a few preliminary conclusions can be made. We have a lot more crows staying for the winter than we used to. We have an increase in the non-native Eurasian collared doves. The first year they were counted was 2008, and we saw 15 total. In 2016, 120 were counted. Eastern blue jays show up every few years and some migratory species stay later in the year than they used to.


I took up bird watching in my early twenties. In the winter, Don and I spent hours hiking beside the gusty coves of Bellingham Bay under bulging, rain-gray skies. As we sat on an aspen log in Grand Teton National Park decades later, I thought about those walks on stormy afternoons, hands in pockets, side by side, leaning into the wind. Uncertainty walked with us. It was December, still migration time. Don, who I met a couple of months earlier, was packing to return to Colorado. I was committed to finishing my degree.
He made me laugh with his names for the seabirds based on their appearance as they floated between whitecaps. The common loon was a barge. The marbled murrelet, a cigar. How could I let him leave?
Don’s move to Colorado was postponed and then forgotten, and our bird walks continued through the winter. On warm days, we glided along offshore in our canoe, looking down into the clear water at purple and ocher starfish, scanning the surface for barges and cigars.
From the start, the practice of counting appealed to me, and I carried a notebook to record what I saw. By May, I had pages of lists. One day I showed them to a veteran birder, who looked at them with a skeptical eye.  “Well, I guess this might be useful for something,” she said. “But I can’t imagine what.”
Soon afterward, I threw the book away. Why had I started keeping it in the first place—to impress someone with the number of species I could find on a two-hour walk? Was I holding a contest with myself? Yet, the birds I’d listed included many of Don’s cigars. Not many years later they would be listed as an Endangered Species. My record might have given clues about how many marbled murrelets lived on the margins of a growing town, nesting in tall Douglas firs along the outer bluffs.
A terminal for the Alaska Ferry now occupies the grassy lot where we used to park for our daily walks, and our route is off limits to the public. Trophy houses have replaced the Douglas firs. If it were possible to go back and walk the trail of my memory, would I see any cigars?
I used to keep a pair of breast feathers on my writing desk, collected from a rosy finch that hit our living room window on a warm March afternoon. I’d saved them for their beauty, for the chance to pick them up and admire them when the sun came through my window. Each shaft was wrapped in a basal ruff of gray down leading to a prismatic crescent of coral, chestnut, lilac and peach. A terminal border of jet-black made the feathers look as though they had been dipped in sumi. Their iridescence blazed like the fire inside an opal. Later I learned that keeping those feathers was against the law. I opened the window and watched them flutter away.
I heard the rosy finch thud against the glass and found it lying stunned in the snow, its mouth agape and its jeweled breast feathers drifting in the air. I cupped the bird in my hands and set it under the canoe.


At the end of our frigid Christmas count, having collected a list of fourteen species, Don and I made a final loop through the forest. A film of high clouds weakened the sunlight and a deep chill settled in my core.
As we dropped toward the parking area, no birds remained. Once in the truck, we turned up the heater fan and directed its blast onto our rubbery faces, looking forward to a hot shower and an evening beside the wood stove. The birds would weather the night without such comforts, ruffed grouse tucked into their snow roosts, chickadees in a sheltered tree cavity, geese huddled in river water as the temperature once again dropped below zero.
The contentment of a day outdoors warmed me as much as the truck’s heater did. From the birds we had counted, a bouquet of favors had been given. I’d felt the gentle scratching of chickadee claws around my finger and nearly collided with a startled grouse escaping its roost. I stored those memories the way birds store seeds in a tree, knowing that some unexpected event might make them bloom anew, like remembering the cigars or the rosy finch I once sheltered under our canoe.
I thought of that bird as the sun dropped behind the mountains and we joined the skier traffic on the highway home. I had gone to check on it after an hour, and found it sitting up, bright-eyed and alert. I picked up the finch and lifted it toward the sky like an offering, unclasped my hands, and watched it fly.

Increase our impact by sharing this story.

GET OUR FREE NEWSLETTER
Never Miss A Big Story!
Tags: Susan Marsh, Back to Nature

Conservationists Sue To Halt Artificial Feeding At National Elk Refuge
With Chronic Wasting Disease likely already on refuge, action is claimed as necessary to prevent disastrous disease outbreak amongst America's most...
Read
Back to home