Back to Stories
Ranching, Whitman College Semester In The West, Yellowstone

Encountering The Modern Garden Of Eden In Two Variations 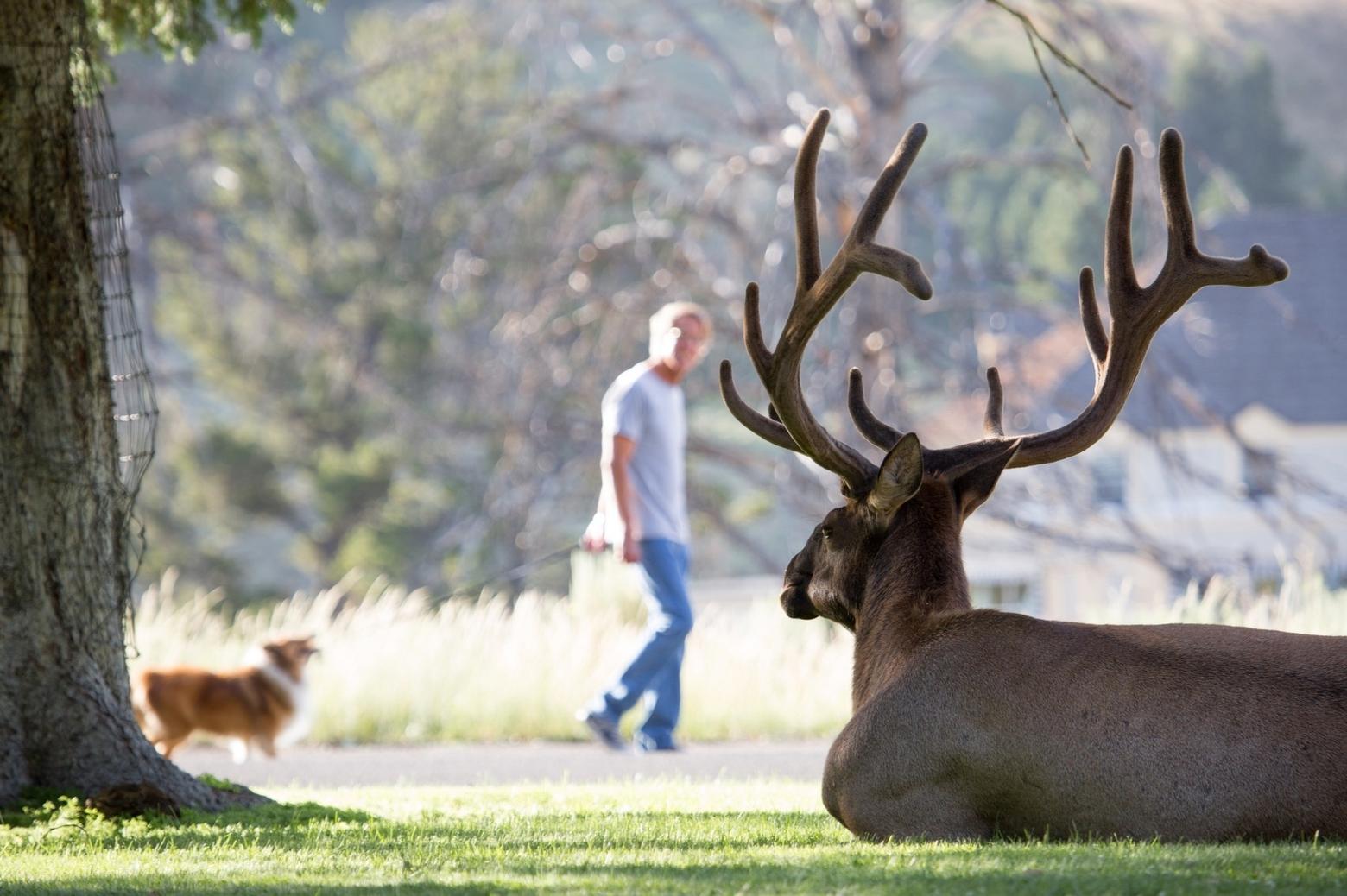 Bull elk on the lawn at Mammoth Hot Springs, adminstrative headquarters for Yellowstone National Park. Photo courtesy Neal Herbert/NPS
We drove to Yellowstone National Park in September and sat with Superintendent Dan Wenk on a manicured lawn that was an oasis in a cement desert of administrative buildings. From beneath a deep brow, Wenk’s bright gaze passed over our heads, and he pointed a broad hand to a parking lot a hundred feet away.
“Wildlife,” he said, “doesn’t respect political boundaries.”
Between cars, two bull elk were bugling admonishments to one another while tourists snapped photos. Yellowstone, eco-tourist mecca, has fallen victim to its own success, as its wildlife become progressively more habituated to the park’s increasing millions of annual visitors. 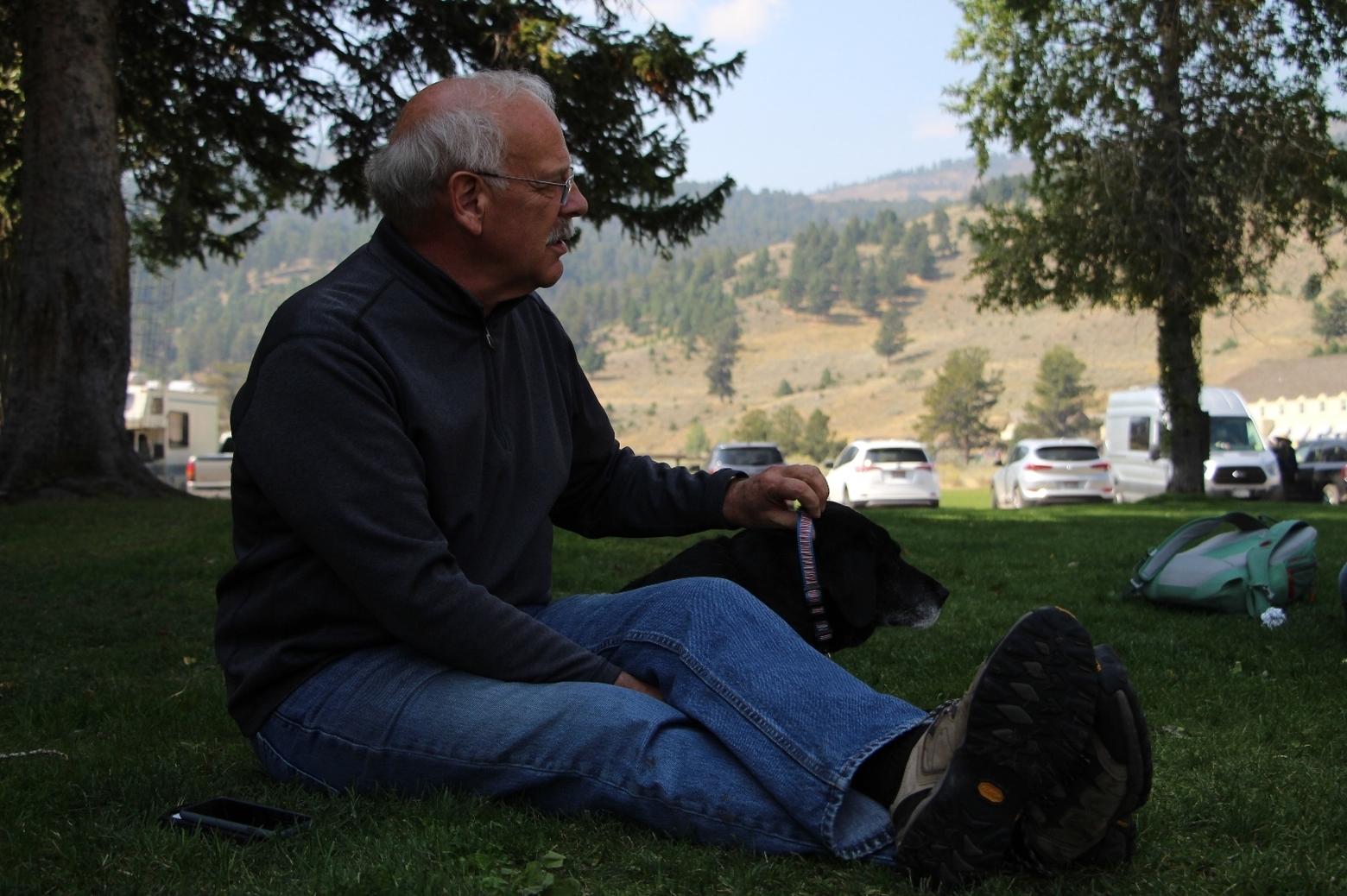 Yellowstone National Park Superintendent Dan Wenk at Mammoth Hot Springs. Photo by Darby Williams
Like Yellowstone, the American West is at a crossroads. Ninety percent of its population lives in metropolitan areas, says Mark Haggerty, an analyst with Bozeman, Montana-based Headwaters Economics, yet it also hosts three-fourths of our public land.
These extremes in the battle of conservation—one artificial and industrial, the other an American Eden, preternaturally and prehistorically wild—are both vital, but neither are scalable; the future of conservation lies between these poles, in the rural Weston working lands like the Anderson ranch up Tom Miner Basin just north of Yellowstone Park.

Daniel Anderson, who is a thirtysomething, doesn’t resemble a wolf. He’s presentable and articulate and speaks with a quiet intensity. Framed by cowboy poetry posters in the refurbished barn he rents out as an Air BnB, he looks quite the gentleman rancher. Nonetheless, Daniel feels an affinity for wolves: “If you wanna know why we have such a hard time with wolves,” he says, leaning against a baby grand piano, “it’s ‘cause we’re lookin’ in the mirror.”
The Andersons have been ranching in the Tom Miner, separated from Yellowstone only by the Gallatin Mountains, for four generations. Daniel’s grandfather, Andy, relocated to Montana to mend the wounds of his heart and mind sustained in a Nazi POW camp. There began the Andersons’ divergence from the mindset of conquering cowboys to the more nuanced and wholistic approach of land stewardship. 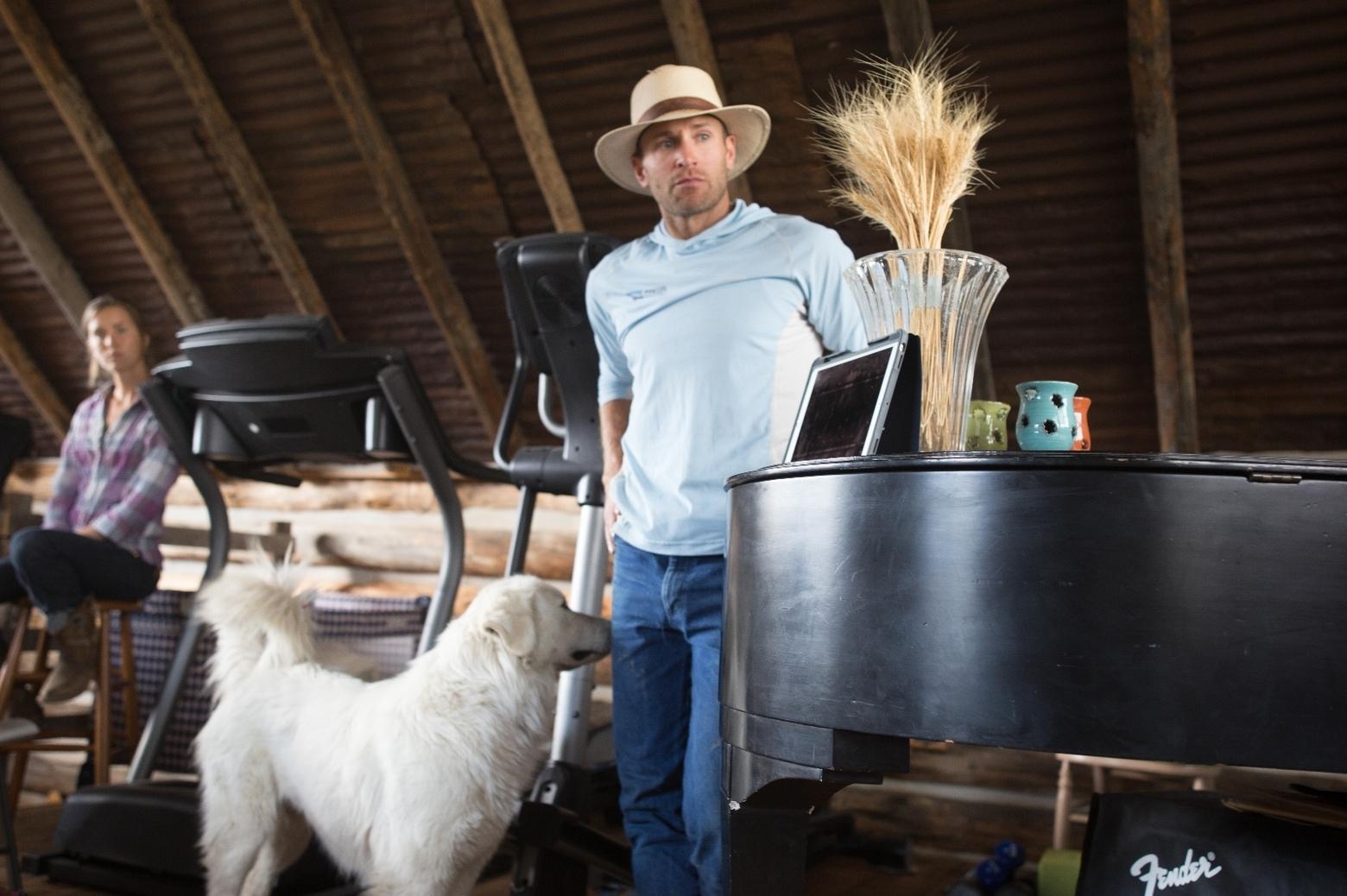 Daniel Anderson and his family have been on a ranch up Tom Miner Basin for generations. Here, he and photographer Louise Johns, talk to Westies about the challenges of Western ranching from a barn loft they rent out as a B & B to generate income. Photo by
When Daniel was a child, wolves reintroduced to Yellowstone found their way over the Gallatins and into the basin. Some neighbors howled for a second extirpation, but the Andersons chose to welcome and coexist with wolves. Why? Life would be easier without them; though livestock depredations are negligible, the indirect costs of range riders and fladry are not.
There is no need  for wolves; generations of Andersons survived without them. Yet despite a new economic and cultural context which forces ranchers to adapt in order to keep their heads above water, wolves have been welcomed home. Why?

There is no need  for wolves; generations of Andersons survived without them. Yet despite a new economic and cultural context which forces ranchers to adapt in order to keep their heads above water, wolves have been welcomed home. Why?

I heard the answer at 5:30 in the morning on the same day we met Dan Wenk. Before any slivers of sunrise could splinter the grass’s frozen blanket, I stood at the edge of our camp in the hinterlands of the Anderson ranch. Daniel appeared behind me and touched me on the elbow.
“You hear that?” he asked. “The wolves, way off. Listen.”
I followed his gaze northward and distinguished a miles-muted howl. In the frosted-glass light presaging dawn, I could see Daniel smile. A silver smear of breath hung frozen in front of our faces, and we looked in the mirror.
In the intimately interdependent mosaic of public and private lands comprising the Greater Yellowstone Ecosystem, what passes one place manifests elsewhere; wolves do not respect or recognize political boundaries and were banished for that transgression. By coexisting with wildlife, the Andersons have created something spectacular for which the proper name has been wrongfully apportioned to the wildernesses we call Edenic. 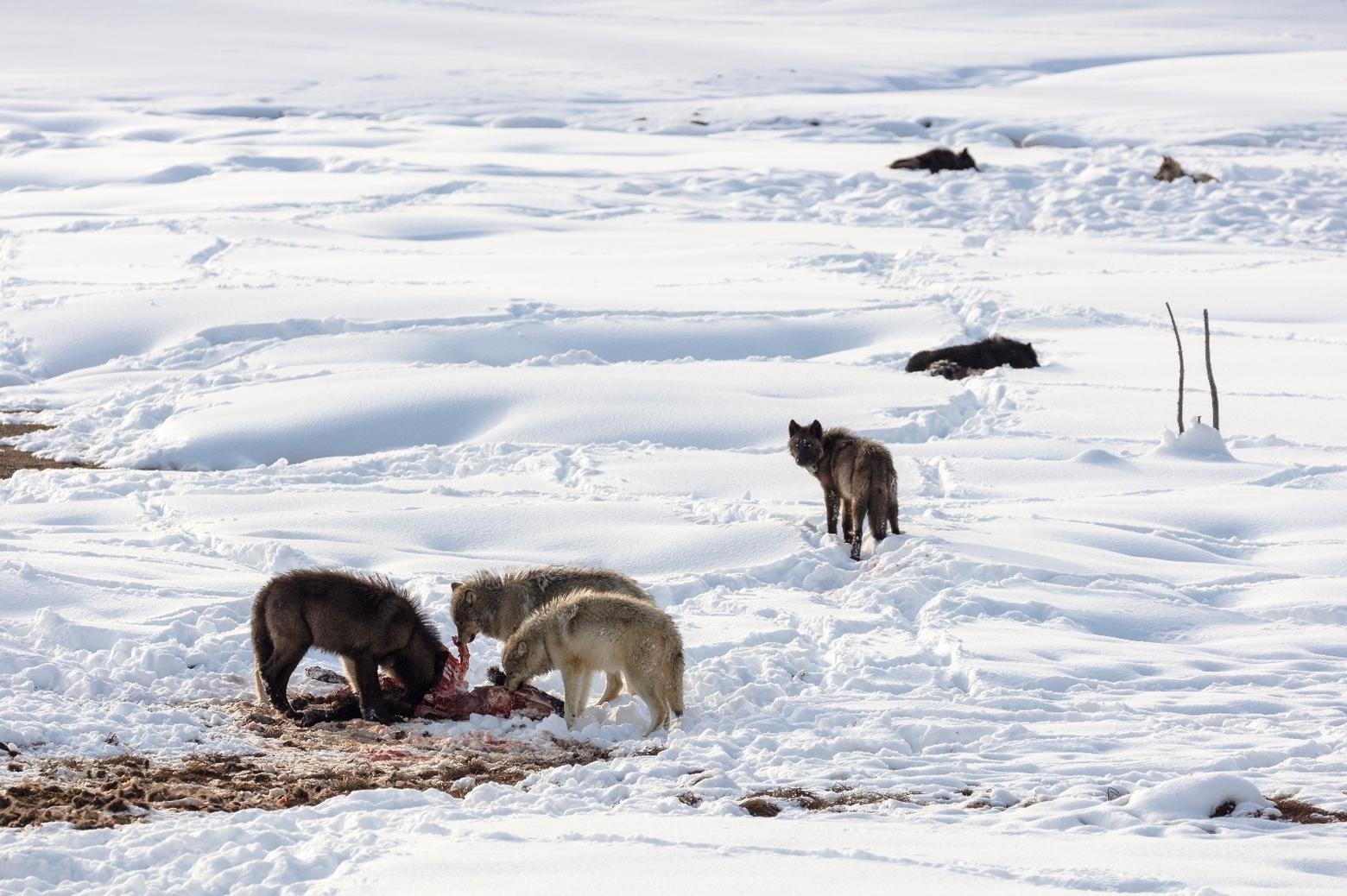 Members of Yellowstone's Wapiti Lake wolf pack on a bison carcass. Wolves also inhabit Tom Miner Basin and the Anderson family is learning new ways every day how to co-exist. Photo courtesy Jacob W. Frank/NPS
This Garden was not void of human presence but defined by it, just as it was defined by the wild. It was not where we played the voyeur, or the tourist, or God. Eden was where the human and the nonhuman coexisted, and Eden is the place where we accept that we are not the sole executors of nature’s estate and welcome wildlife as our co-stewards.
The more we learn, the more it becomes apparent that we cannot grasp the scope of our actions’ impacts on ecosystems whose complexity surpasses any conscious understanding.
We need to enlist those who don’t seek to understand. Wildlife acts according to instinct sculpted by millennia of natural selection, not the sum of cultural biases or even the best available data, and all living things have a stake and function in slowing the decline of the planet. By transforming the working West to a shared, rather than permitted, habitat, we can pool those functions.
Why invest in conservation? Because we need to replant the Garden. 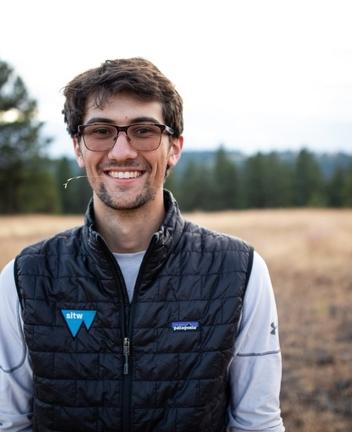 Noah Dunn, an avid outdoor wanderer, is a member of Whitman College's 2018 Semester in the West program and majoring in environmental and German studies. Hailing from Bellingham, Washington, he will graduate from the liberal arts school in Walla Walla, Washington in 2021.

What's In A Yellowstone Place Name? A Man Of Infamy, It Turns Out
Mountain Journal columnist Jesse Logan says Army Col. John Gibbon, who has a river and meadow named after him in Yellowstone...
Read
Leadership, Yellowstone

Wenk: Tell People What They Need To Hear, Not What They Want To Hear
In speech at MSU, Yellowstone Park Supt. Dan Wenk issues a challenge saying time to save the ecosystem is now
Read
Back to home