A Hunger For Solitude During Visitor Season

After the guests depart, Susan Marsh savors a wild Snake and charismatic megafauna 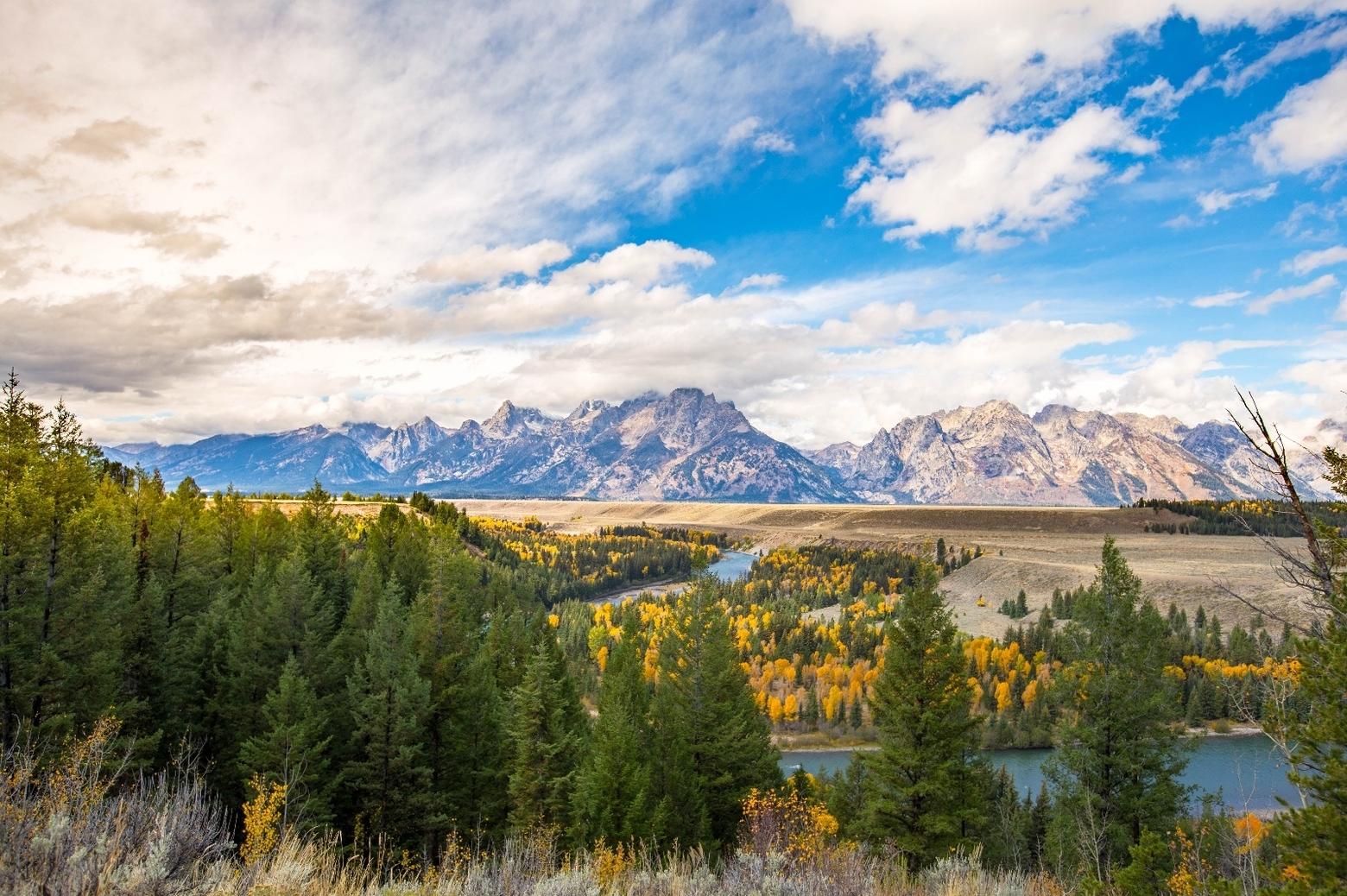 Snake River Overlook. Photo courtesy Tobiason / NPS
I find the power of the mountains strong early on a summer morning.
I rarely go for a drive before 5 am, but today I dropped visitors at the Jackson Hole Airport at that hour. It rained hard and long yesterday and fog lay heavy on the ground in the half-light of dawn. As we climbed the hill past the National Elk Refuge and fish hatchery the fog grew even denser and we wondered if the plane would be able to take off.
That wasn’t my concern. I cheerfully bid my friends so long and breathed a sigh of relief. I hadn’t had a moment alone or unoccupied in a week, and I was hungry for some solitude. I returned to the highway from the airport with two options—go back to town or see if the lupine was blooming at Lupine Meadows. On went the left turn signal. 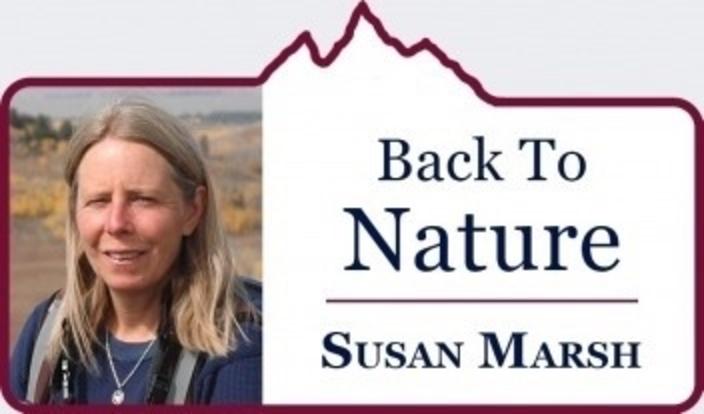 I barely made it past Moose Junction in Grand Teton National Park before pulling over. The fog had turned to layered ranks of rising mist, the mountains not yet touched by sun. The land was dark and drained of color while the sky held a hint of rose where higher clouds broke into ribbons.
The Grand Teton off to the west remained shrouded while lesser peaks stood between the fog bank and ribbon-clouds, their faces dark as midnight and cast in an intense blue somewhere between navy and cobalt. It was the perfect somber hue to show off old snowfields and fresh snowfall from the day before.
I stopped again at the Windy Point turnout, left the car and walked through damp wildflowers and sedge until my feet were soaked. Two bull elk, antlers already branching wide and covered with thick velvet, grazed across the road from me.
Sparrows scattered in the sage. Their buzzing, wheezing, tittering songs came from across the flats while the music of kinglets and warblers issued from the forest.
Other than the birds, I heard nothing—too early for traffic, visitor centers or snack bars.
The airport was quiet, the plane my visitors were to board still an hour from take-off. Then I became aware of a substantial distant roar. Steady, white noise, distinct from the brief clatter of rock fall or the rumble of an avalanche. I realized it was the Snake River, a mile off and hidden from view beyond a raised river terrace that dropped away toward the east. I knew it dropped more steeply from the edge of the terrace to the water, further enclosing the river’s roar.
The sound should be muffled by such topography and distance. Land soaks up sound, doesn’t it? Isn’t that why people living near highways construct berms? 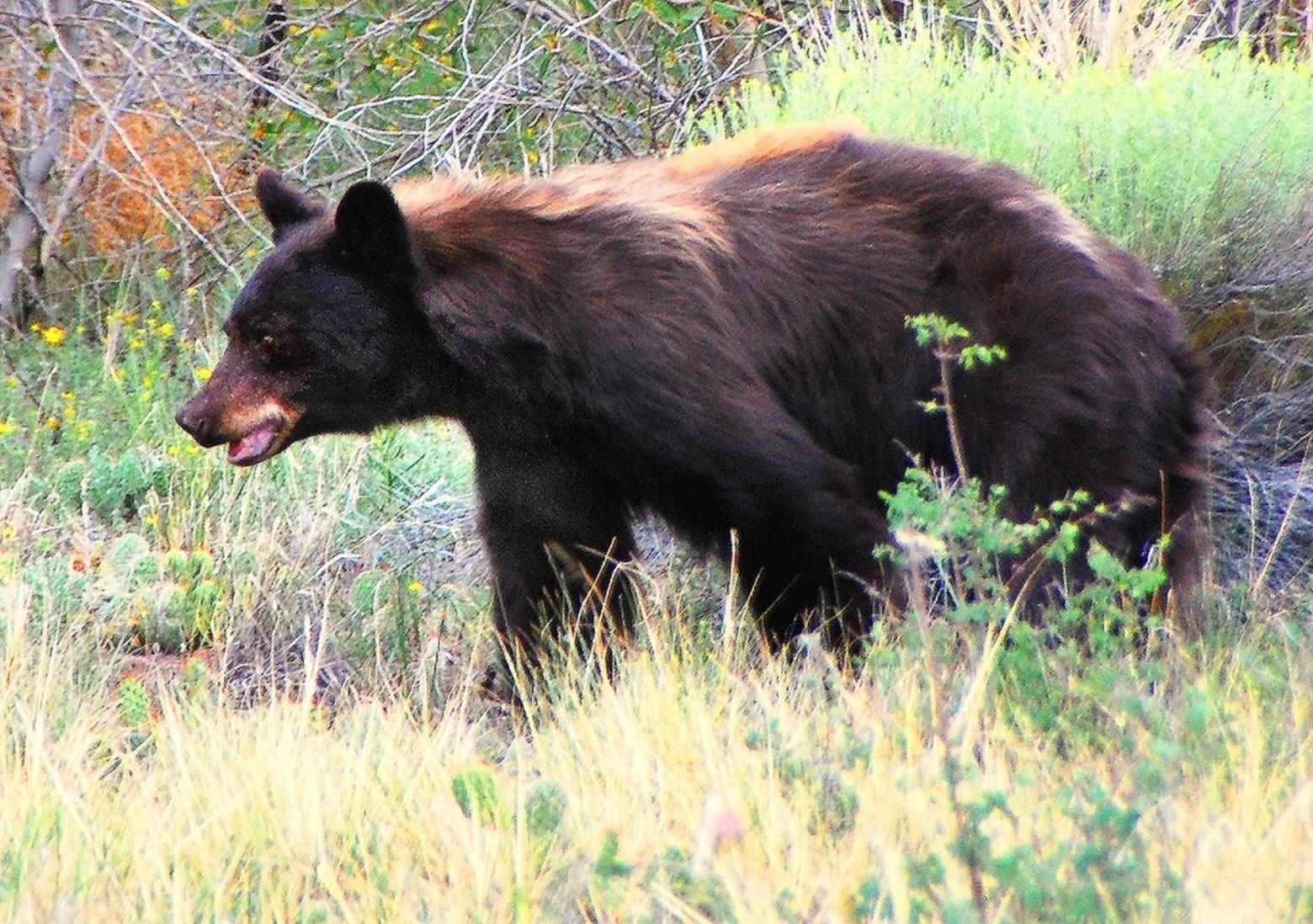 A black bear Photo courtesy Patrick Myers/NPS
It must have affected the volume to some degree, but it could not stifle the voice of the Snake, surging with snowmelt, runoff from rainstorms, and a load of sediment that has turned it an opaque greenish-brown. Entire trees hurtle like rafts through the unstoppable power of water that runs day and night.
The sound reminded me of river trips when we camped just upstream from the next big rapid. It would waken us off and on during the night as if to remind us that it wasn’t tired or sleepy and it was ready to douse our silly little boats if we dared to approach with anything but caution and respect.
Why does it strike me as strange that a river runs at night? When you can’t see it, can only hear it, your imagination makes that rapid bigger and more powerful and its sound seems to grow sharper and more ominous as dawn approaches. It’s like wondering if a tree falls in the forest if you aren’t there to see it: of course it does. How do we think all those logs got there?
But, from a high ridge during the day or in my tent at night, an unseen river always messes with my head. It makes the local silence feel more profound when I can hear something so distinctly that is so far away.
After Windy Point I move to a spot from which I can’t hear the Snake anymore, and now the waterfalls take over. I can see one from a pull-off on the way to Lupine Meadows, a ribbon of white cascading over bare rock. Its sound is like the river but smaller. No less powerful, though – if I was standing beside it instead of the roadside, the reverberations would shake the brain in my skull.
It’s what the mountains do – shake me up. I stand in silence, in awe. The air is still, damp, and cold. I feel my feet in their wet socks, macerated and waterlogged and half-numb from cold. I should walk around to warm up but all I can do is stand there and stare and listen.
Five pronghorns lounge on a slight knob, arranged so they can see in all directions. A dark figure strides through the sage a hundred yards away. I watch it for a while, trying to decide if it’s a wolf, but the stride isn’t right. Then the obvious occurs: it’s a bear. Good thing he’s 100 yards off, I think – that’s the legal distance I’m supposed to be from him.
The bear walks casually but with purpose, heading for someplace he knows, using a path he must follow regularly. He ignores me, since I’m downwind, still, and far away. But someone else is closer, the bicyclist who I passed a while ago, riding one of those recumbent bikes on which you’re so low to the ground you can’t see over the sagebrush. I watch what unfolds, as the bear is obviously about to cross the road. The bike path is just beyond it.
Bear and biker are oblivious to each other, then the bear steps onto the pavement. The woman on the bike has passed, but just barely, and the bear startles. I can almost hear him saying, Oh shit. He pauses for a millisecond then breaks into a lope, crossing the pavement, bike path and the wide open flat south of Lupine Meadows. The biker approaches me and I mention that a bear just crossed right behind her. She stops and looks around, unable to get high enough to see that distant black back as it heads into the cover of some lodgepole pines.
“Wow,” she said. “And I didn’t bring my bear spray.”
I told it her looked as if the bear was more afraid of her than the other way around. She shrugged and kept pedaling. 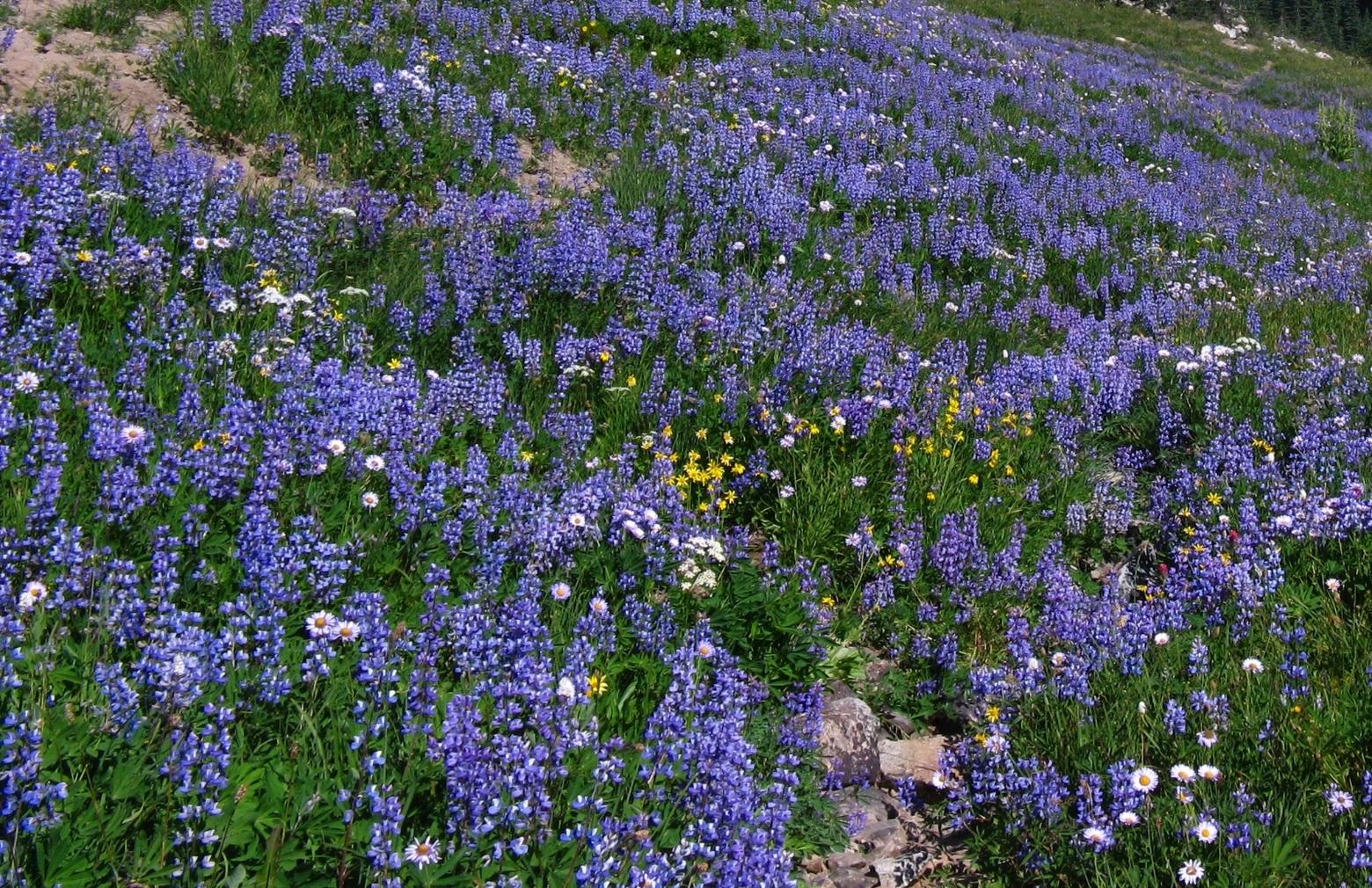 Mountain lupines run riot. Photo courtesy NPS / Killam. Cropped by Mountain Journal
As I and my company hiked this past week, they kept asking with a mix of excitement and fear whether we might see a bear. Between Colter Bay and Hermitage Point on one rainy dark day I thought we had a good chance. Also on the way to Phelps Lake, a well-known bear magnet at certain times of year. I figured if a bear showed itself, however close or far away, Diane would shriek so piercingly that the bear would wince, lay its ears back and run. Fortunately we didn’t test my theory.
I was glad to have seen a smallish, healthy looking black bear making his way across the meadow without a hundred people chasing him with their cameras. When we were at Phelps Lake I scanned the brushy chutes for signs of critters and spotted a couple of dark spots. They looked more like moose than bears, but from my distance it wasn’t clear. What was clear was how close they were to the Death Canyon trail. And a group of hikers with bright orange rain ponchos moved along below them.
We watched through binoculars as the people passed, apparently not seeing the wildlife nearby. Then they stopped, turned back and gathered. More hikers joined them until there was a knot of people standing on the trail. One of the orange ponchos started moving uphill toward the moose/bears. Oh no, I wanted to shout. Leave them be. But the poncho kept going, past protective boulders and groups of small firs. I stopped watching, disgusted.
Then Diane said, “He’s turning back – fast! He’s running.”
I thought we might witness someone being taught a lesson by an exasperated moose, but the encounter ended peacefully. The black blobs moved upslope and the hikers dispersed, and we went back to eating our sandwiches.
That was as close as we came to a might-be bear until after I dropped off my company at the airport. Didn’t it figure that I’d see a bear after they left. But I wouldn’t have wanted to make a big deal out of it, to listen to any squealing or pleas that we inch a bit closer for a photo.
It was a great sighting, for sure; isn’t seeing a bear always a thrill, a mix of fear and wonder? But it was matched by the pronghorn mother and her small baby, an osprey flying overhead, the majestic bull elk grazing together undisturbed. And the sound of the river in flood, the silence of the rock spires, the bright yellow flash of a warbler diving into the willows, the extravagance of lupine, gilia and sunflower painting the sagebrush flats.
Each of them, from greatest to least, offers a portal through which we can escape our self-absorbed, hurried lives and glimpse eternity. They pool their power to shake us up and out of our ignorance of all that surrounds us, all these wild lives as busy with their affairs as we are with ours. They can make us wonder, make us recall past adventures, make us smile. They allow us to partake, if only for an hour on a quiet morning, of their immense collective being.

Of Bias And Bears: Is Delisting Greater Yellowstone's Grizzlies Based On Science Or Politics?
For several decades, Jesse Logan gained renown as a forest ecologist.  He says the scientific rationale behind removing bears from federal...
Read
Grizzly Bears, Hunting, Wildlife

Lessons Learned From A Hunter Attacked Twice By A Grizzly Bear
The Incident Involving Todd Orr In The Madison Mountains Offers Insights For Those Chasing Big Game And Adventure In Bear Country...
Read
Wilderness

Wilderness, America's Second-Best Conservation Idea, Is Under Attack
In the first part of an ongoing MoJo series, "Modern Wilderness," explored through a variety of perspectives and voices, columnist Franz Camenzind...
Read
Back to home