Next Act: Let The Bugling (Of Bull Elk) Begin In Yellowstone

Autumn arrives sooner on the Yellowstone Plateau than most other places in the Lower 48. Winterkeeper and Mountain Journal columnist Steven Fuller chronicles the start of a glorious season of jousting 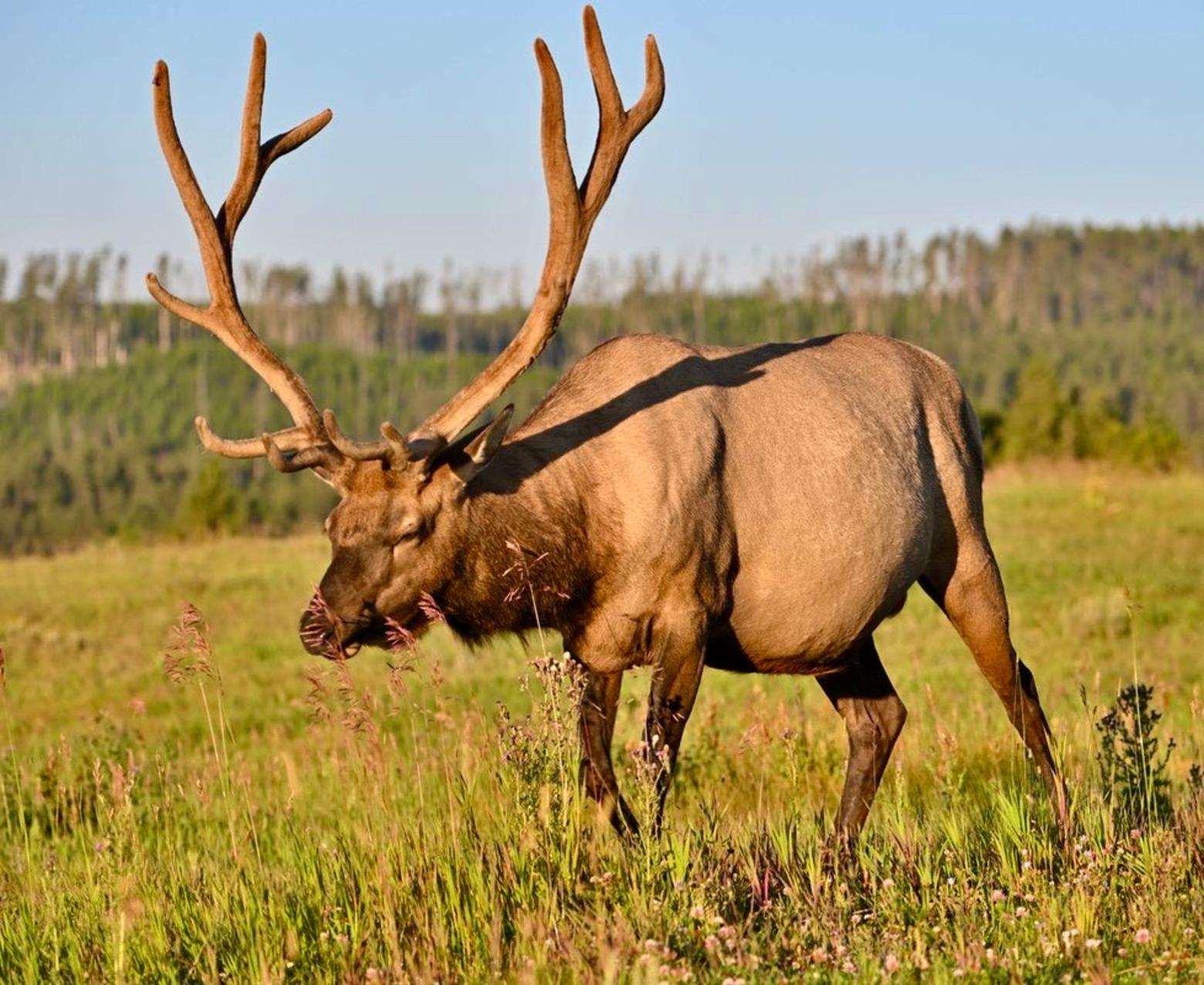 by Steven Fuller
Early autumn in Yellowstone arrives when it is the middle of summer across much of the continental US.
Daily, days are growing noticeably shorter and at 8,000 feet above sea level on the Yellowstone Plateau here it means living organisms are also responding to cooler nights and mornings. Grizzly and black bears are in hyperphagia, the time when their bodies are compelling them to take in as many calories as possible. Birdlife that arrives to breed and raise their offspring in April and May are getting read to take flight for southern climes.
A week ago, as I walked down from my home to go to work there was the sparkle of frost on the boardwalk, the first frost in more than six weeks. 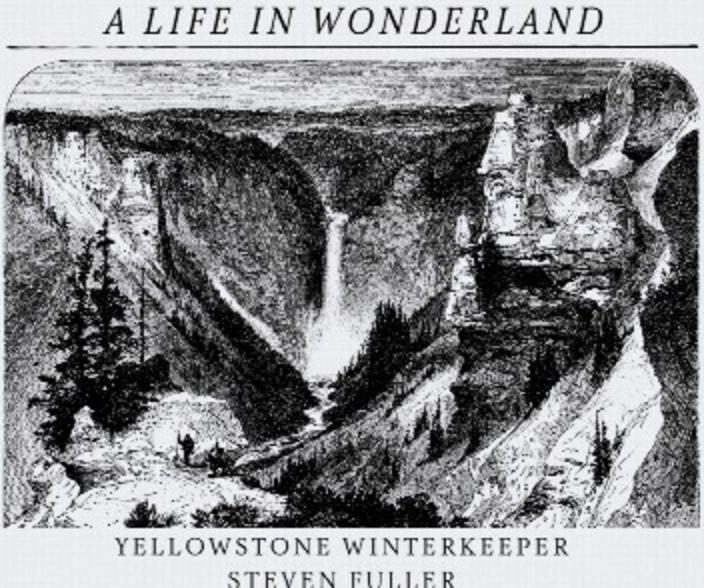 Every day the meadows are showing more color and most flowers have transformed into seeds. The smoke of the continuing North American continental western fires filter the light of the sun making for morning golden light. When the smoke is most thick the moon is a blood red disc. But the first cold rains of the season promise to clear the air of soot and dust though as I write visibility due to smoke is less than four miles.
The bison rut is well past mid-peak, but will continue for some weeks. A primary marker of the transition from summer to autumn is the shedding of the velvet that has nourished the summer long growth of this years’ bull elk antlers. Every year the local bulls shed their velvet the second week in August, perhaps the surest sign of the change of seasons.
I'll like to share some photos and captions speaking to what I've witnessed. The elk rut, when bulls emit a sound colloquially called "bugling," and spar with their rivals, each trying to gather together females for breeding, has already begun. 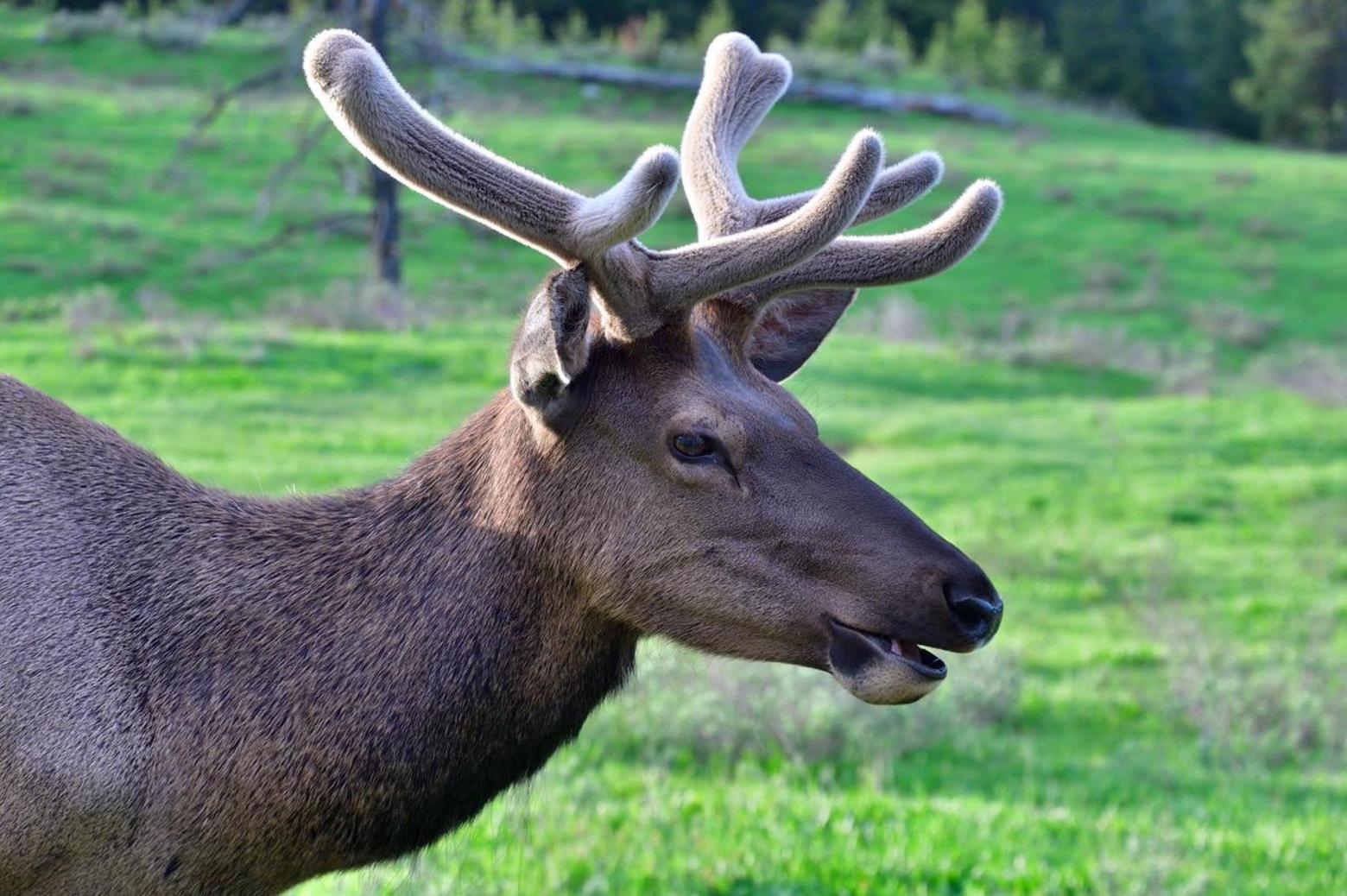 Throughout the spring and summer the blood-rich tissue—"velvet"—nourishes the rapid sprouting and expansion of bull elk antlers grown annually to replace the old pair shed earlier in the year. 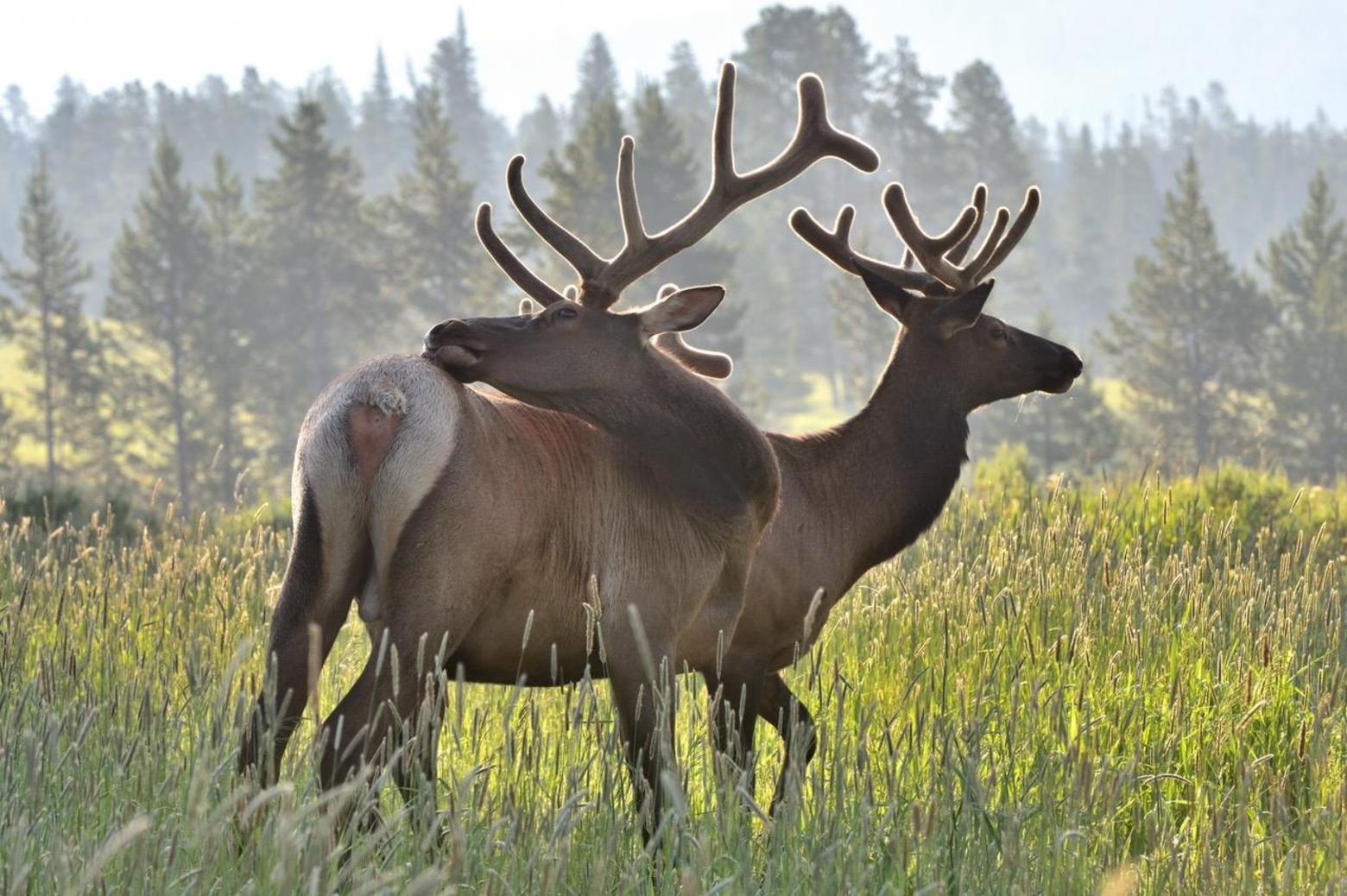 Antler growth as captured a few weeks earlier. Backlighted early in the morning, the velvet is surrounded by an aureola of light. 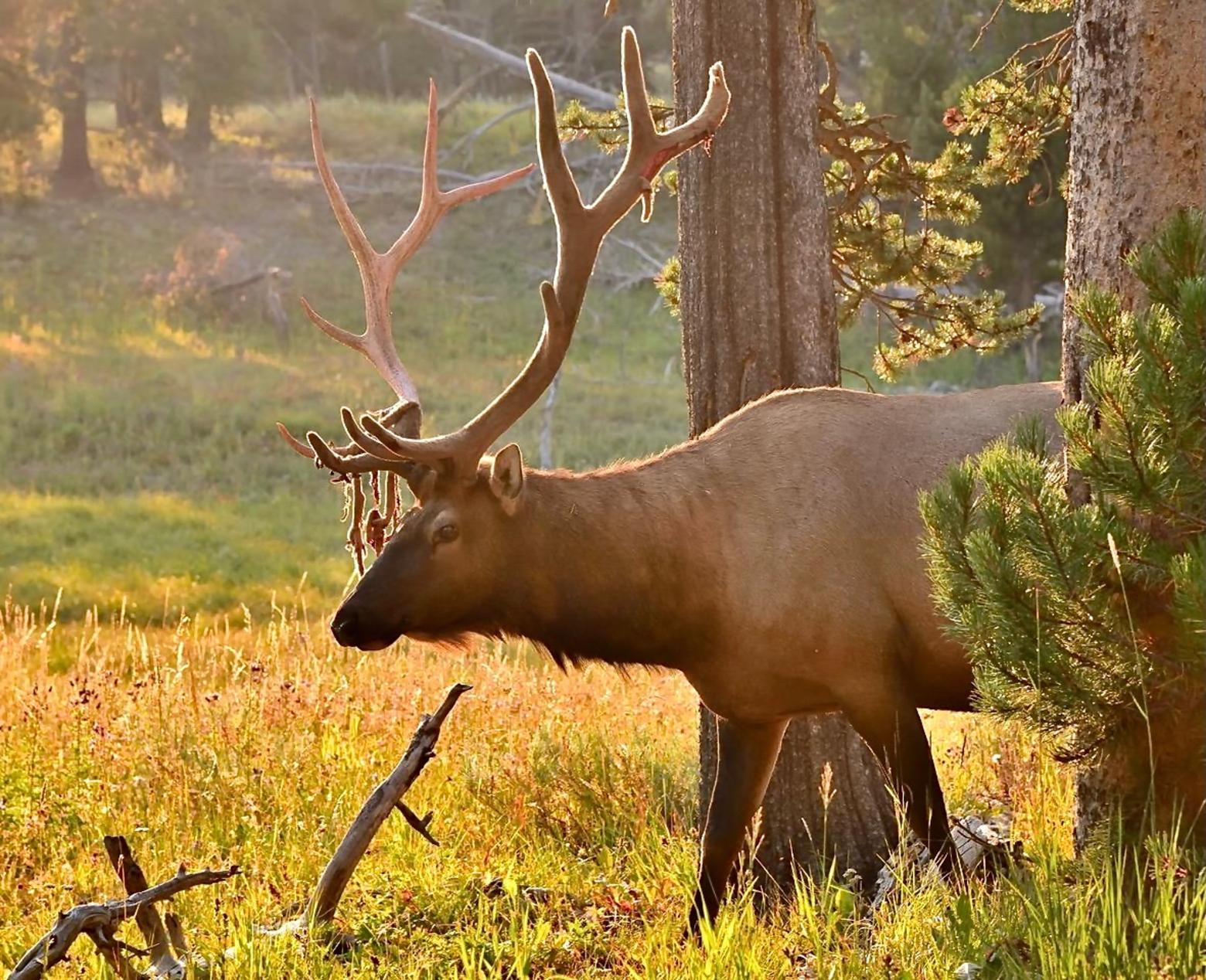 In mid August, the velvet on this bull looks dark, dry and dead. He is about to shed it. As expected, it happens right on schedule, same as it has ever been, at least here locally in the vicinity of Canyon Village and slopes leading to Hayden Valley. The tines—the tips of the antlers—are no longer rounded. The pointed tips under the velvet indicate that the calcification of the antlers is complete. Underneath the dried velvet the antlers are hard, soon be ready for jousts of coming elk rut. 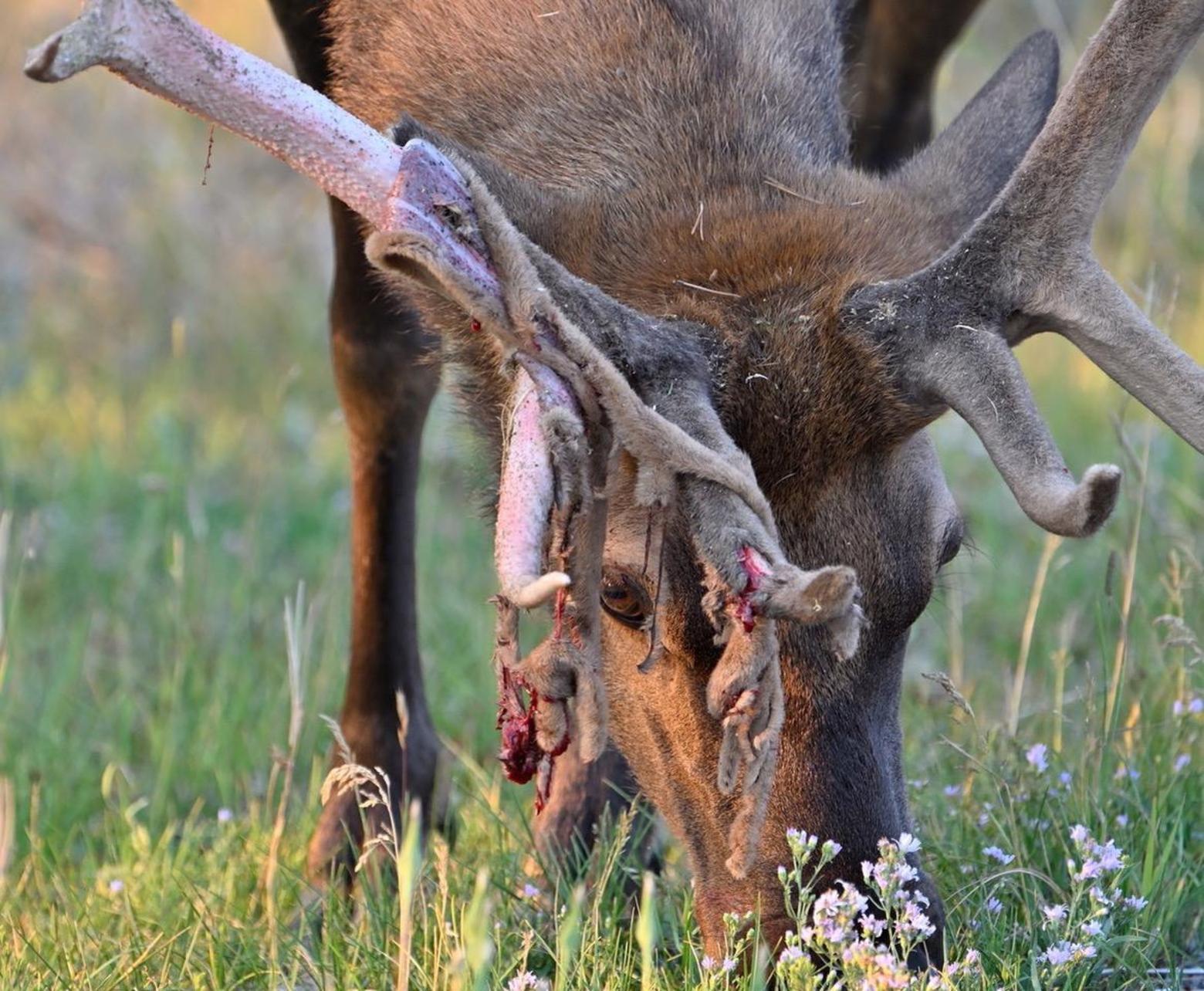 Closer up, the velvet hangs in thick strips on his right antler while remaining mostly in tacts on the left

The velvet sheath is steadily rubbed off and the sharp antler tips exposed.. 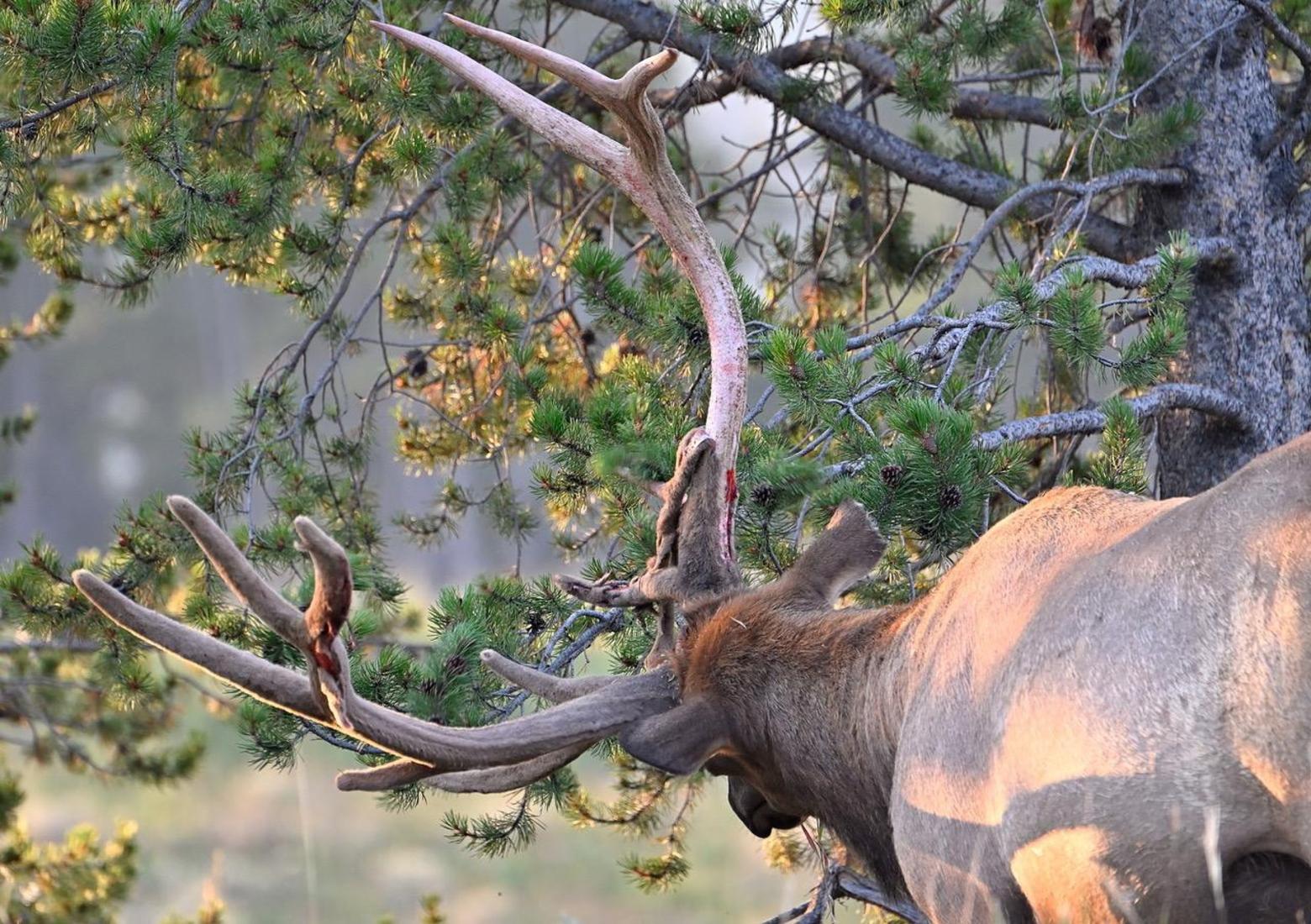 This bull spends 20 minutes vigorously rubbing and horning the branches of the tree scattering broken clusters of pine needs and twigs at this feet. The end of his right ear is missing, a consequence of some previous unknown incident in his life. 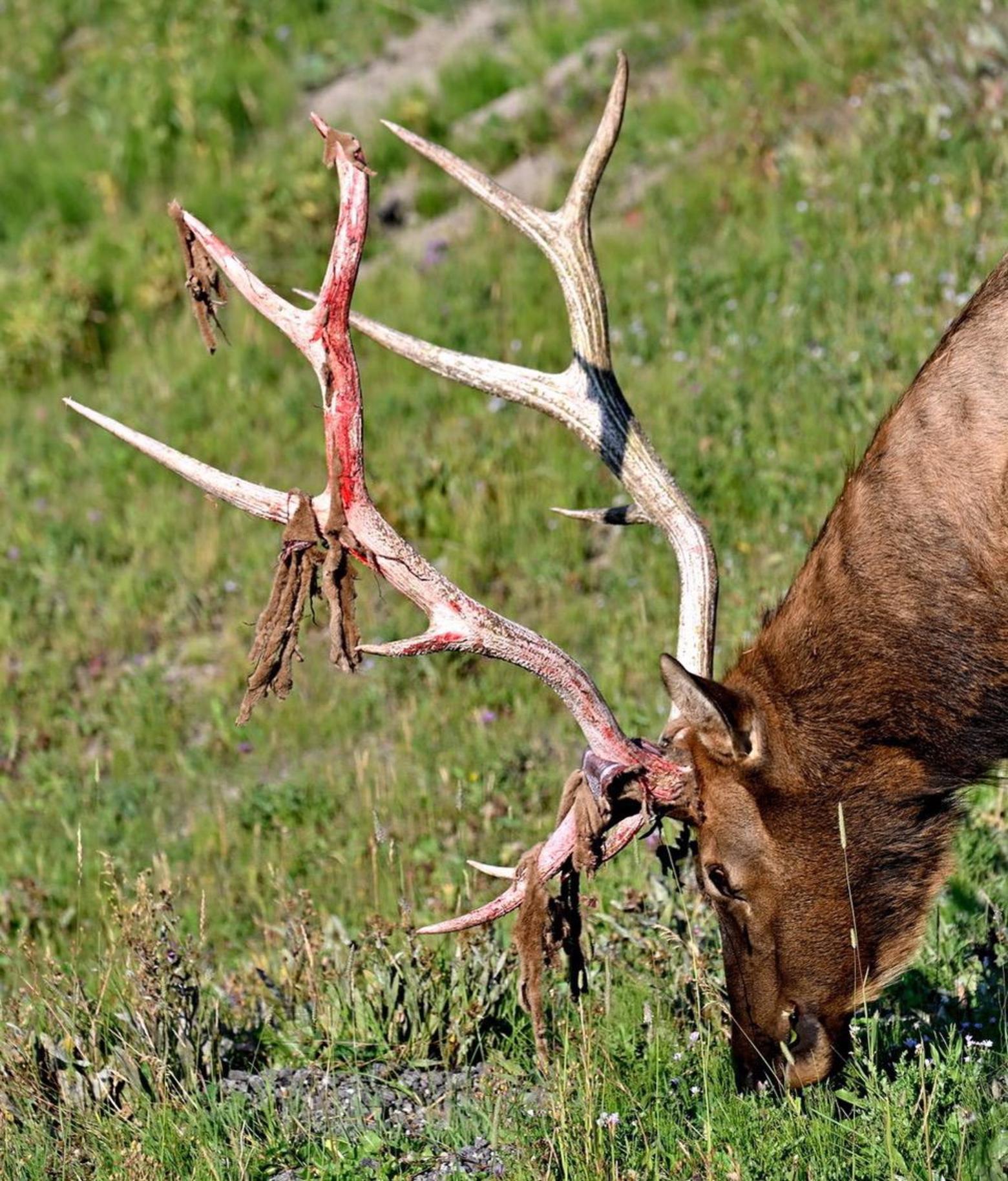 The next morning, much of the velvet is gone from both antlers though tatters still swing and cling as he grazes his home terrain but not far away are rivals in the making. 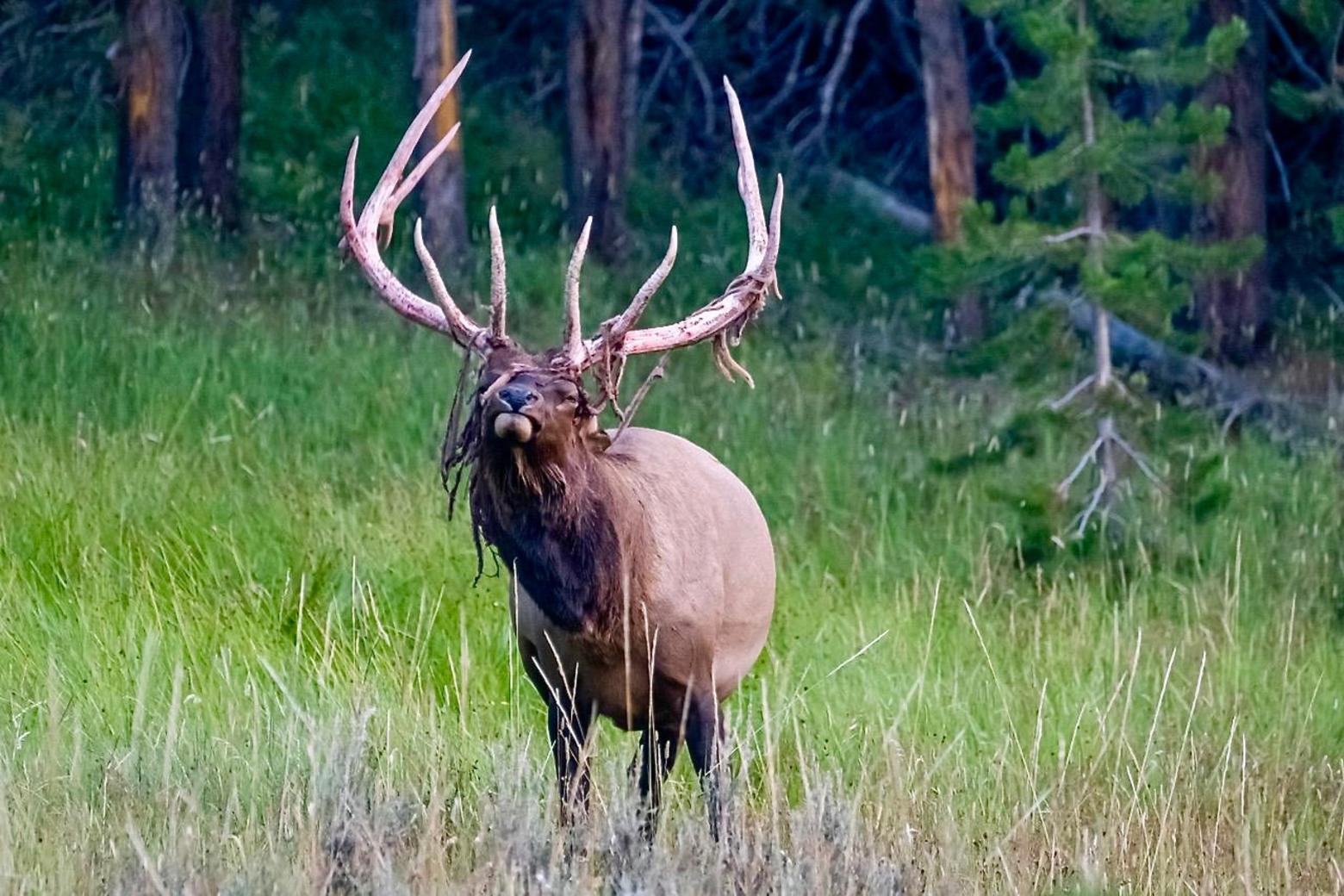 Nearby, in fact, in a neighboring meadow, a second bull at the same seasonal stage as the first, struggles with the annoying dread-lock tangle of dead velvet that hangs around his face. His velvet is mostly gone exposing the bone white of his newly-commissioned antlers. 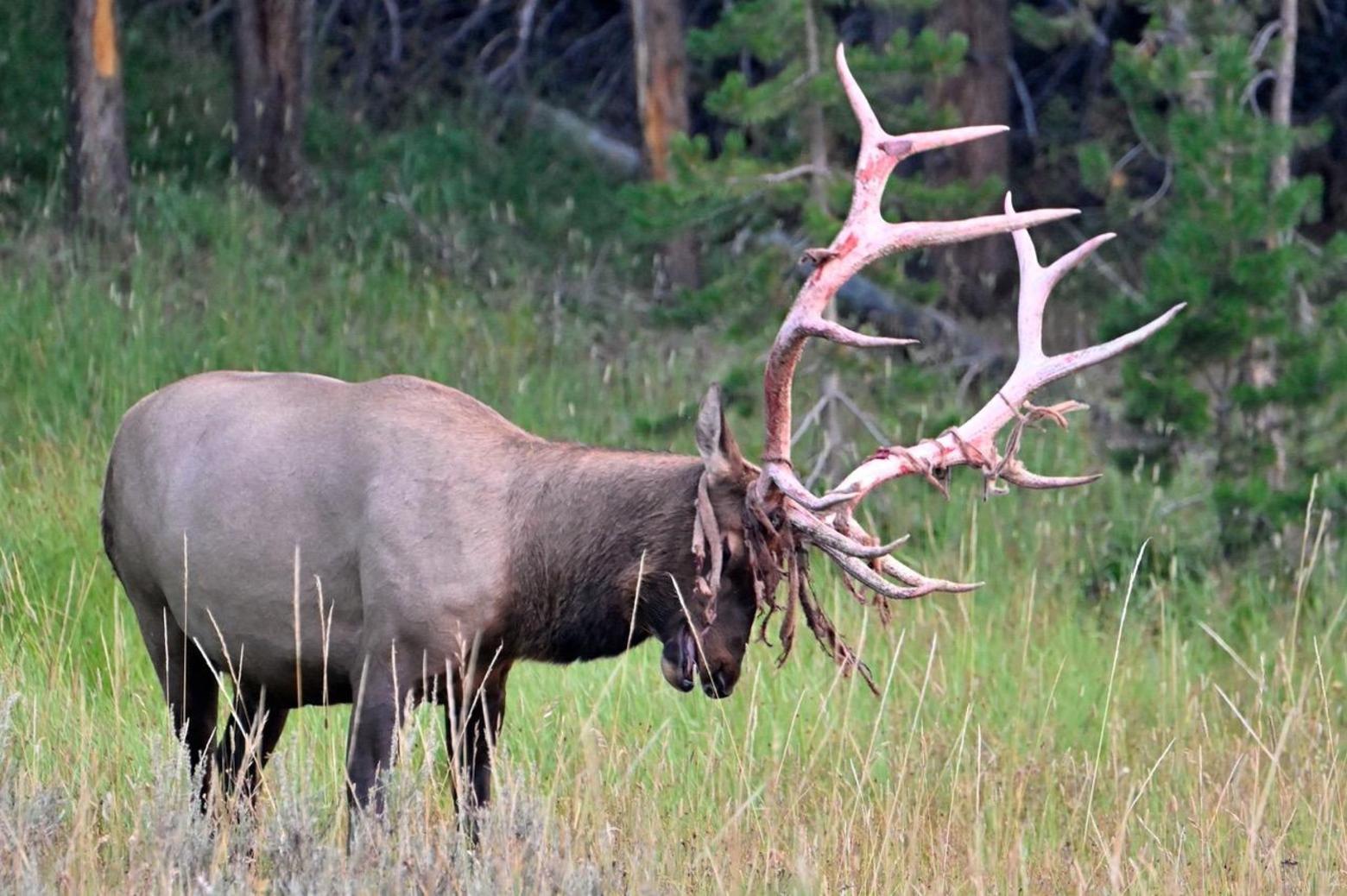 He twists and turns his head to no avail as the cluster swings back and forth round his head. 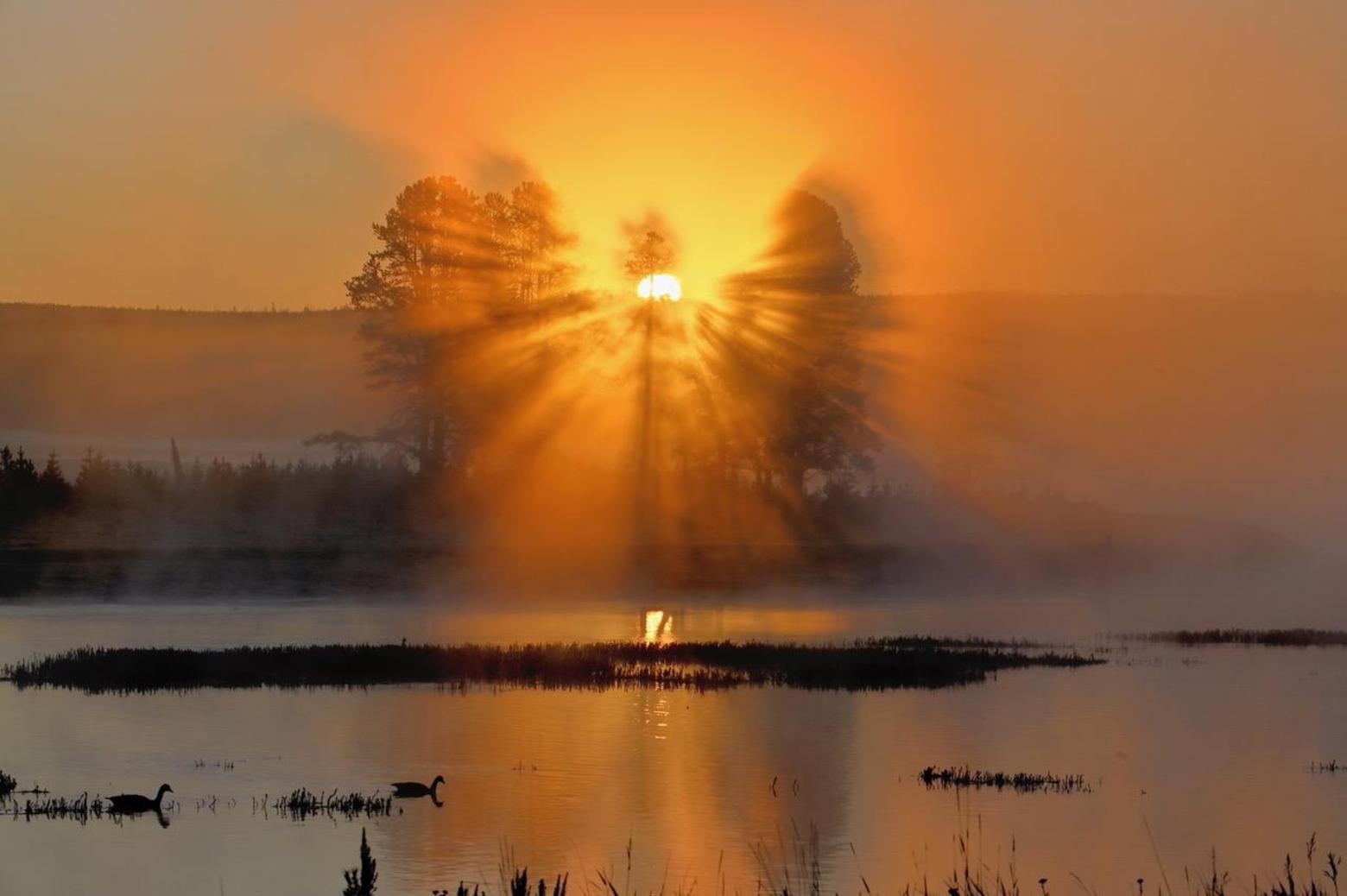 Amid it all, the aesthetics of the change in seasons is glories, between atmospherics created by missing rising off warm river water into cooling air, leaves starting to take on flaring color and even the effects of grainy light cased by woodsmoke blowing in from Oregon and California. Here, smoke is the genesis of sunrise firelight and accompanying crepuscular rays which was unremarked by two geese cruising upriver along the Yellowstone. 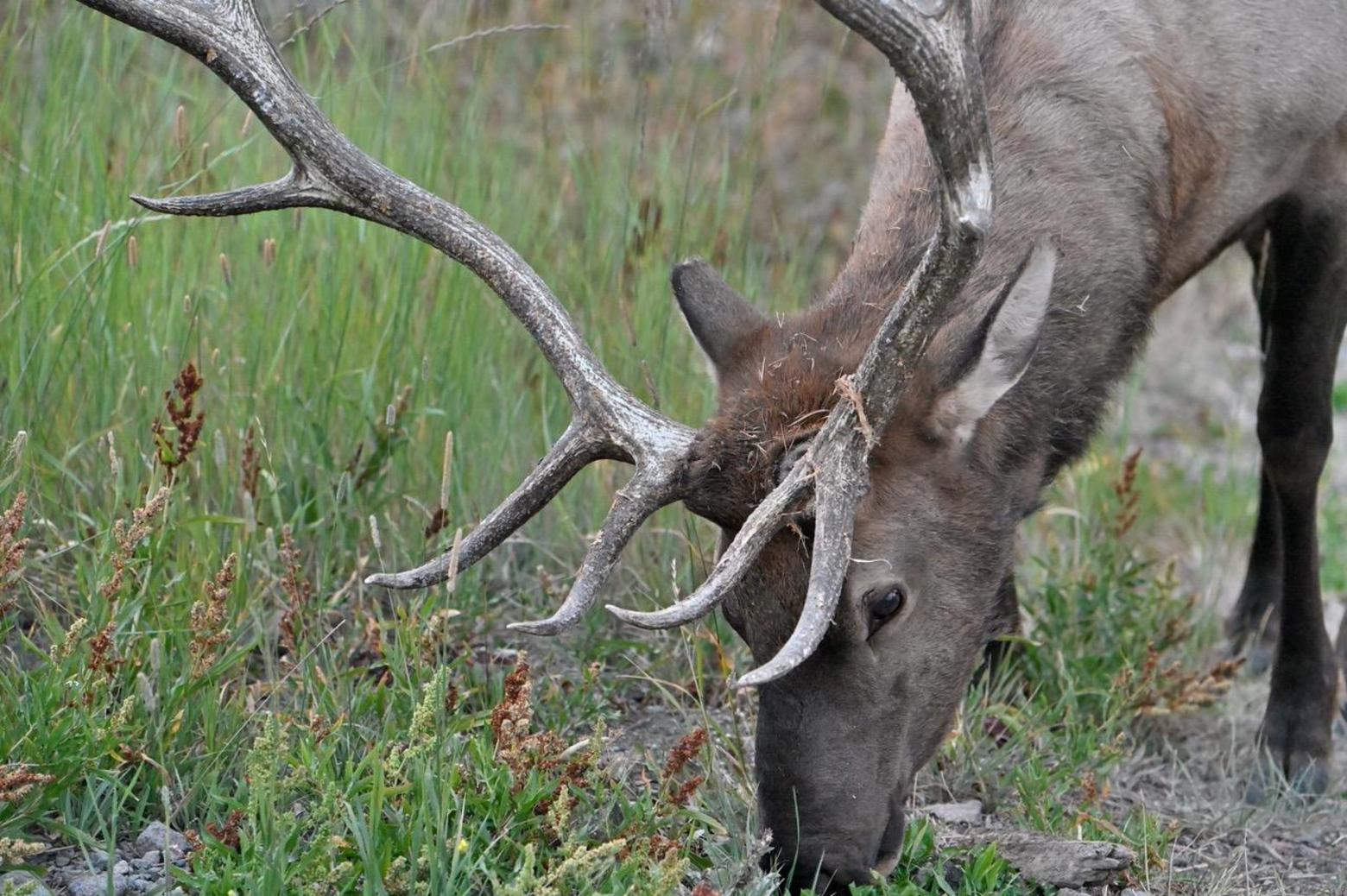 The next day, the velvet of the first bull is mostly gone. The bone white of his antlers is stained with pine resin, dried blood, and dirt. In the heat of the rut bulls violently harrow the soil and throw clods of earth and clumps of grass into the air. On frosty mornings meadows resound with the clatter of antlers on antlers and the cacophony of call and response bugles all around in the distance which is the celebratory song of the elk rut. 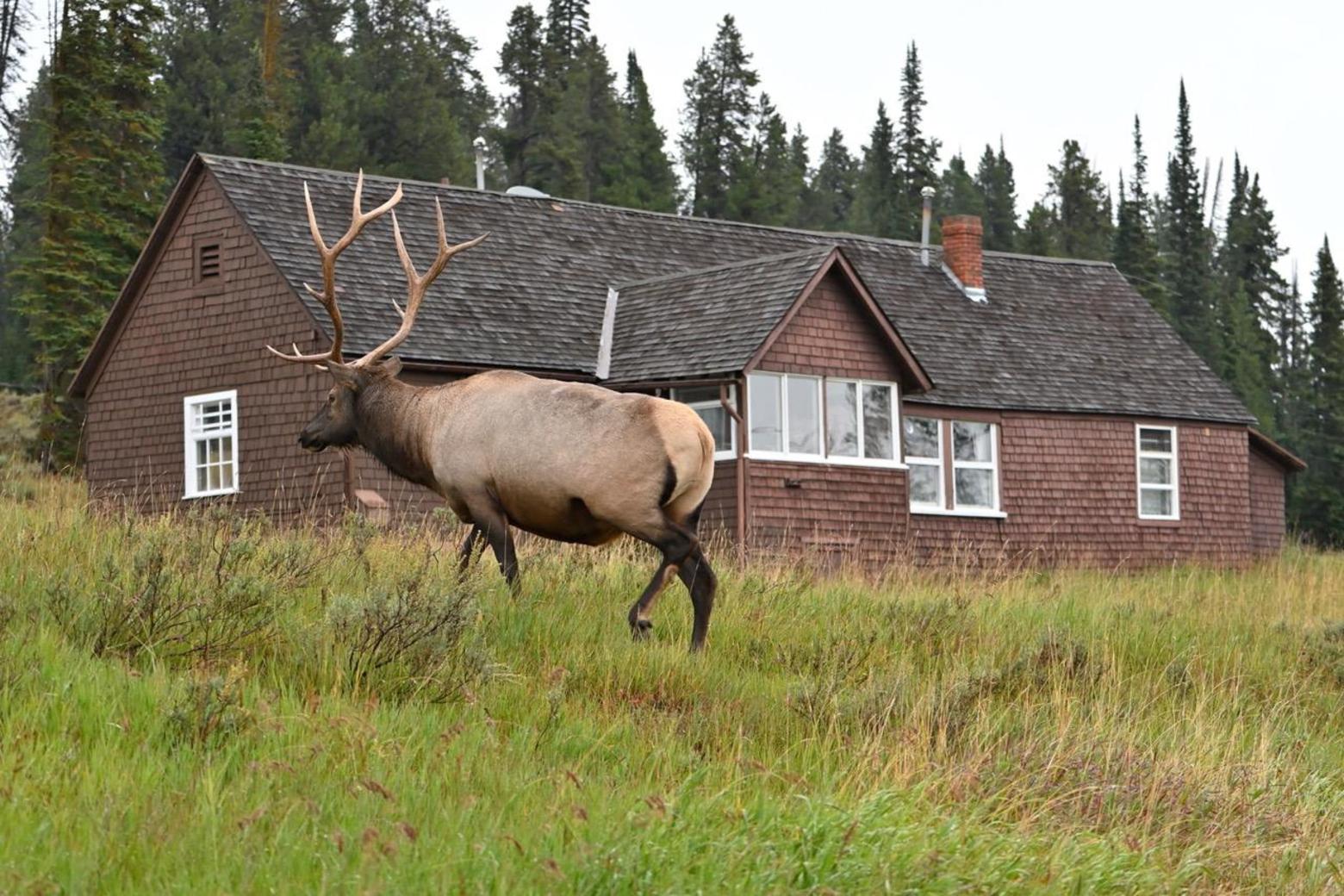 Late just the other night, through an open window and by the reflected light of a waxing gibbous moon I heard the first tentative elk bugle of the season around Canyon. 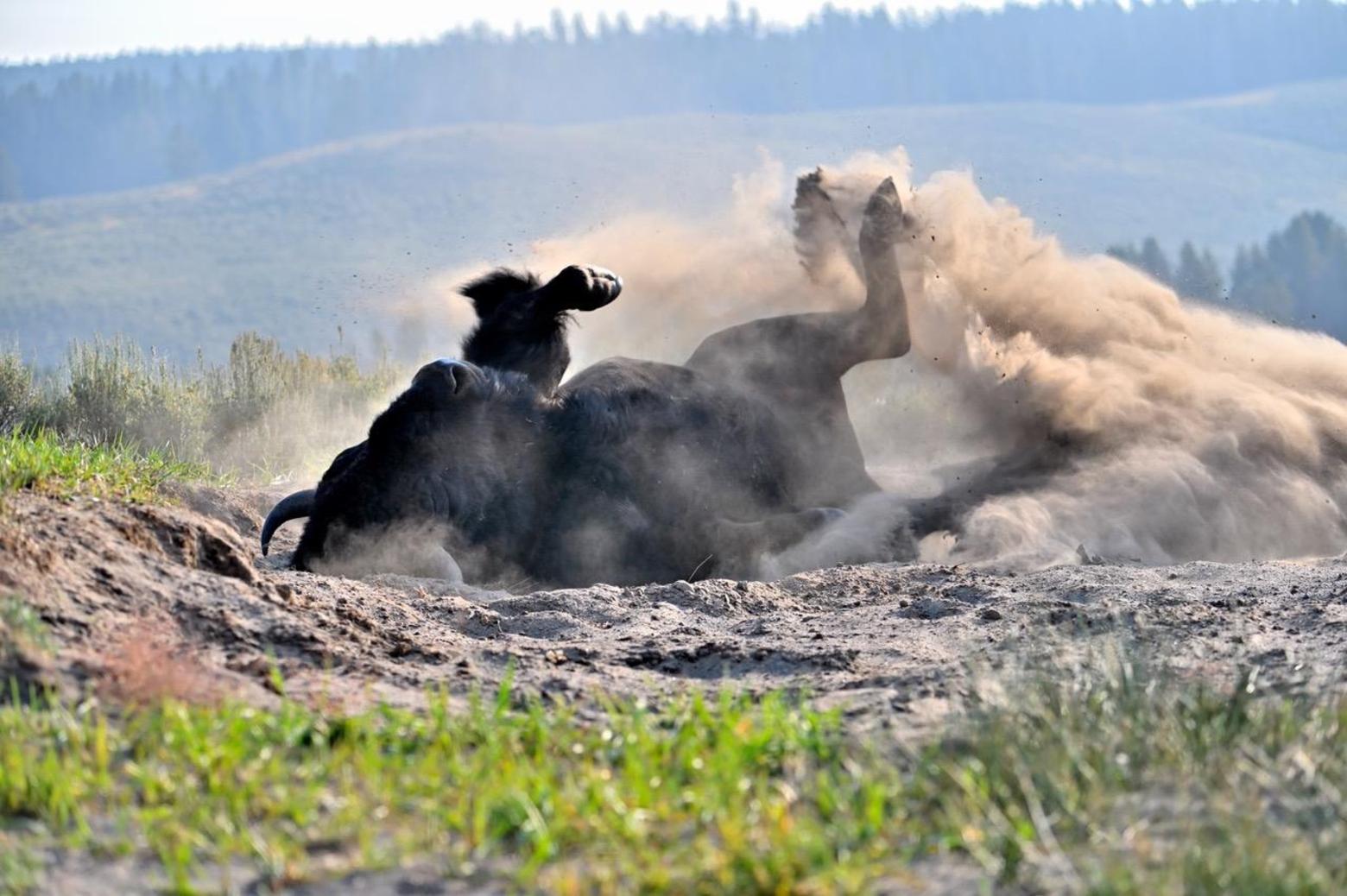 Meanwhile, as the elk people ready for their rut, the mating season of the bison people continues. Here a mature bull enjoys a dust wallow roll—a frequent pleasure during their mating season. The bison rut is well past its peak but still there will be rigorous days of collective excitement and sometimes violent episodes between bulls for a while yet. Until recently, late in this year's calving season, a few little tardy orange calves were being born, the late fruit of last year's rut.