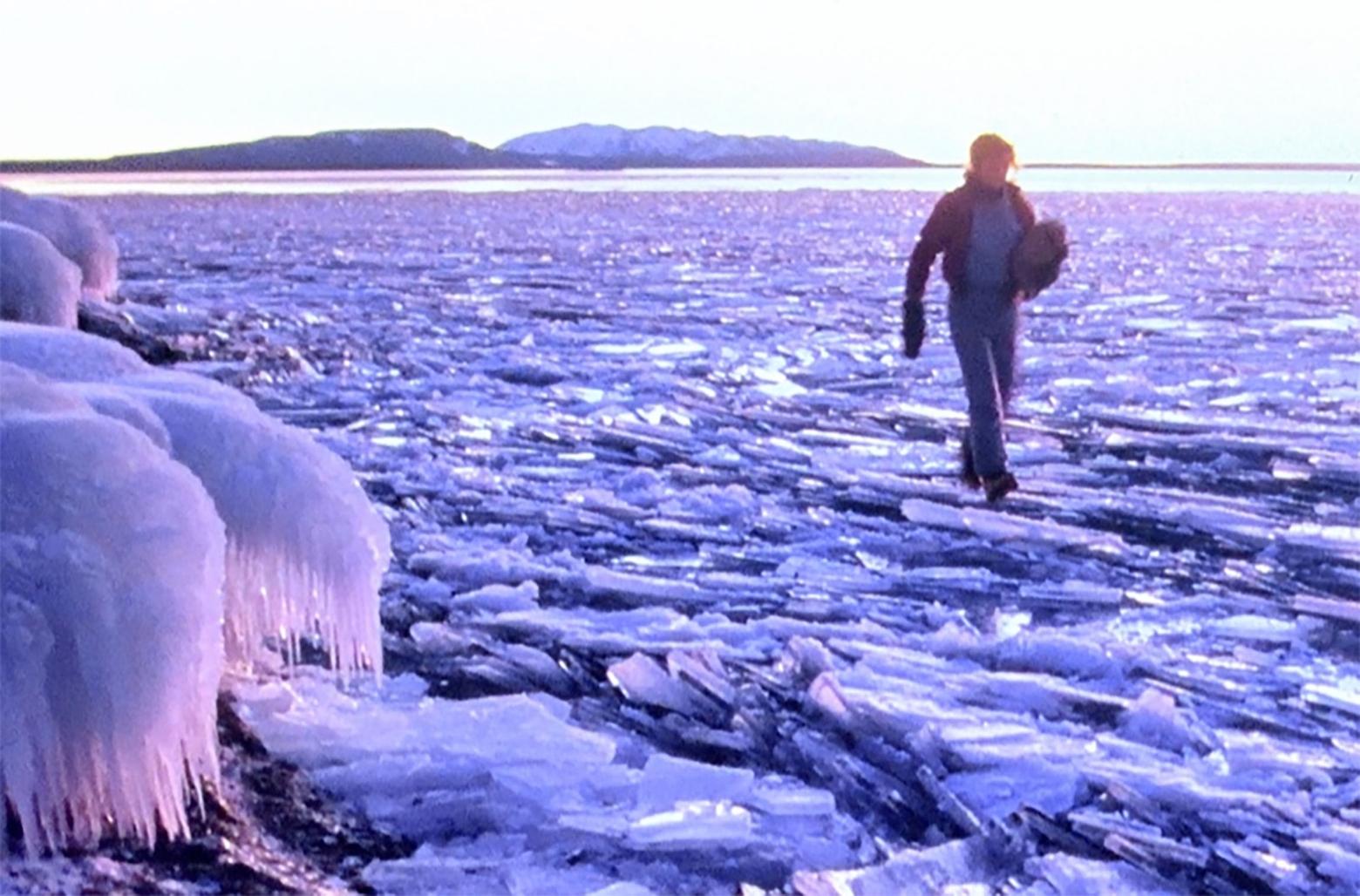 A Fuller family member strolls across shattered lake ice, as sharp as glass, on Yellowstone Lake. Photo courtesy Steven Fuller
EDITOR'S NOTE: It has been awhile since Steven Fuller's last dispatch for Mountain Journal about his life in Yellowstone and work as a park 'winterkeeper."  This is the first of two parts, timed for the start of the New Year, in which Fuller reflects on the transitions happening not only in America's first national park but his own life. Enjoy.
Part 1, My Return
Words and images by Steven Fuller
Where have we been and what awaits us? From my space high on the Yellowstone Plateau I’ve enjoyed a strange kind of refuge from these anxious moments in modernity. Those are interesting questions that hold different meaning as I reflect back on the last several months and the almost 50 years of tenure in the park.
In my late youth I was drawn to Yellowstone as to a refuge, a small piece of the natural world relatively unwounded and a preserve mostly complete with its full complement of wildlife. When first I came here I took for granted that Yellowstone was institutionally immortal.
Subsequently I have come to realize how fragile is even the planet and how ultimately how ephemeral are all human constructs. In undertaking to write this piece marking my return to Mountain Journal, my editor asked me, “Where have you been?!”… since the flurry of pieces I wrote too long ago for him and for you, dear reader, about life in Yellowstone.
Where have I been?—'tis a question to which I owe a credible answer to both of you and to myself, and one that will take a few paragraphs to sort out.
Forty some years ago, after a decade of world rambling, I washed up on the beach at Yellowstone National Park and as luck would have it I was hired as the Canyon winterkeeper, the winter caretaker of the summer tourist facility located in the center of the park. I was the only applicant for the job. I am still here.
In the beginning, in winter, our nearest neighbors were two other 'keepers and a ranger and his wife on the shore of Lake Yellowstone 19 miles to the south. An archaic worn out snowmobile was our only means of travel to the nearest small communities 40 miles away. But, we were told we were expected not to leave canyon until we were plowed out sometime in April. 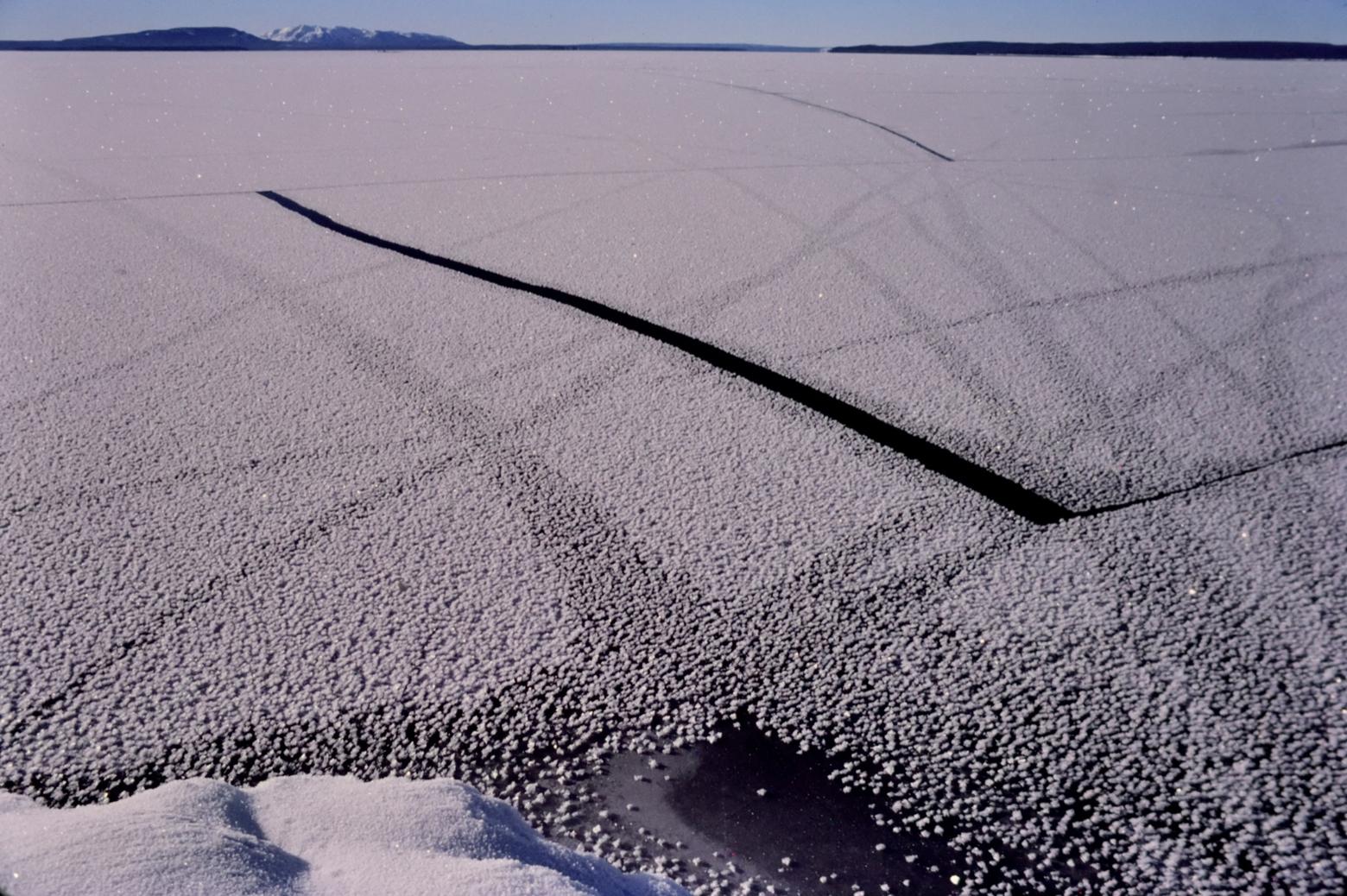 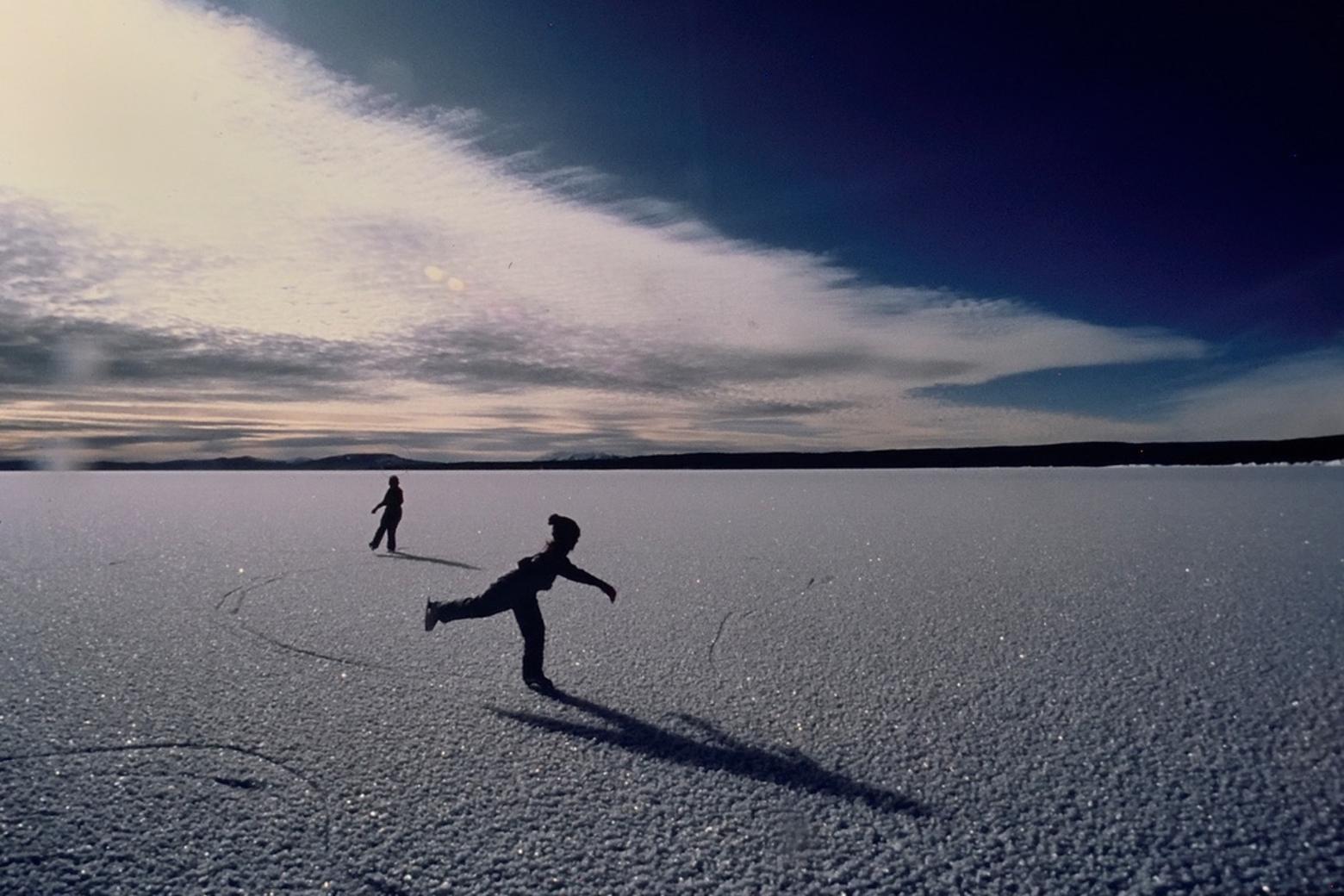 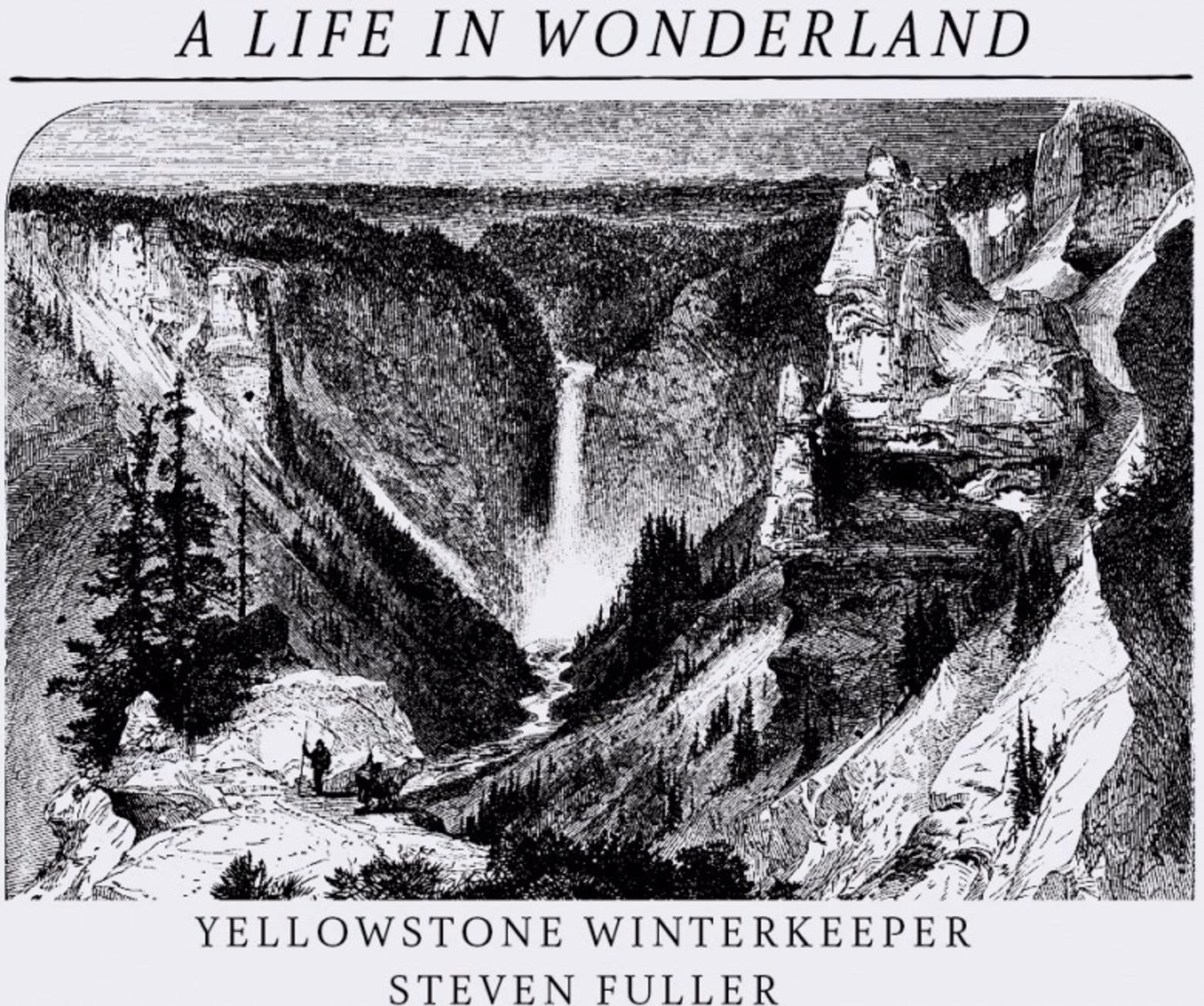 I am still the winterkeeper here, but the temporal boundaries of “winter” as opposed to nature's winter, have been much abridged. For most of the year now my official title is the “Canyon Village Facilities Manager." I am responsible each year to activate, maintain and then to winterize the facilities so as to provide for the needs of some of the four million tourists that pass through Yellowstone annually.
Nowadays my winters are mostly taken up with corporate computer work rather than quarrying snow on a myriad of roofs with a shovel and a snow saw as I did for decades. It was clean work, harmless work, work that freed my mind and tempered my body. Where have I been?
More and more, I’ve been in a cubicle in paradise. For me, winterkeeper was always more than a job, it has always been a “way of life.” Independence from the bosses, solitary self- reliance (“need a helping hand?...look to the end of your arm” was the reply from headquarters), and self-discipline. My joy of being thoroughly at home in a harsh challenging environment, my physical exuberance of the work and of the play, the beauty of living in an unspoiled landscape and the opportunity to mingle respectfully among archetypal animals that may kill you if you misread them.
Frontiersman Natty Bumppo, self-sufficient Robinson Crusoe, solitarian Ed Abbey—characters that I as a winterkeeper liked to suppose would be a spiritual cohort.  Far from the maddening crowd living a life free of civilization and its discontents where our better angels are nurtured by nature while we live blessedly isolated from the corruptions of the city. It may be fantasy, many of our frontier ancestors lived Hobbesian lives “poor, nasty, brutish, and short,” but it is an integral part of our American folklore and deeply ingrained in the romance of our collective mythology. 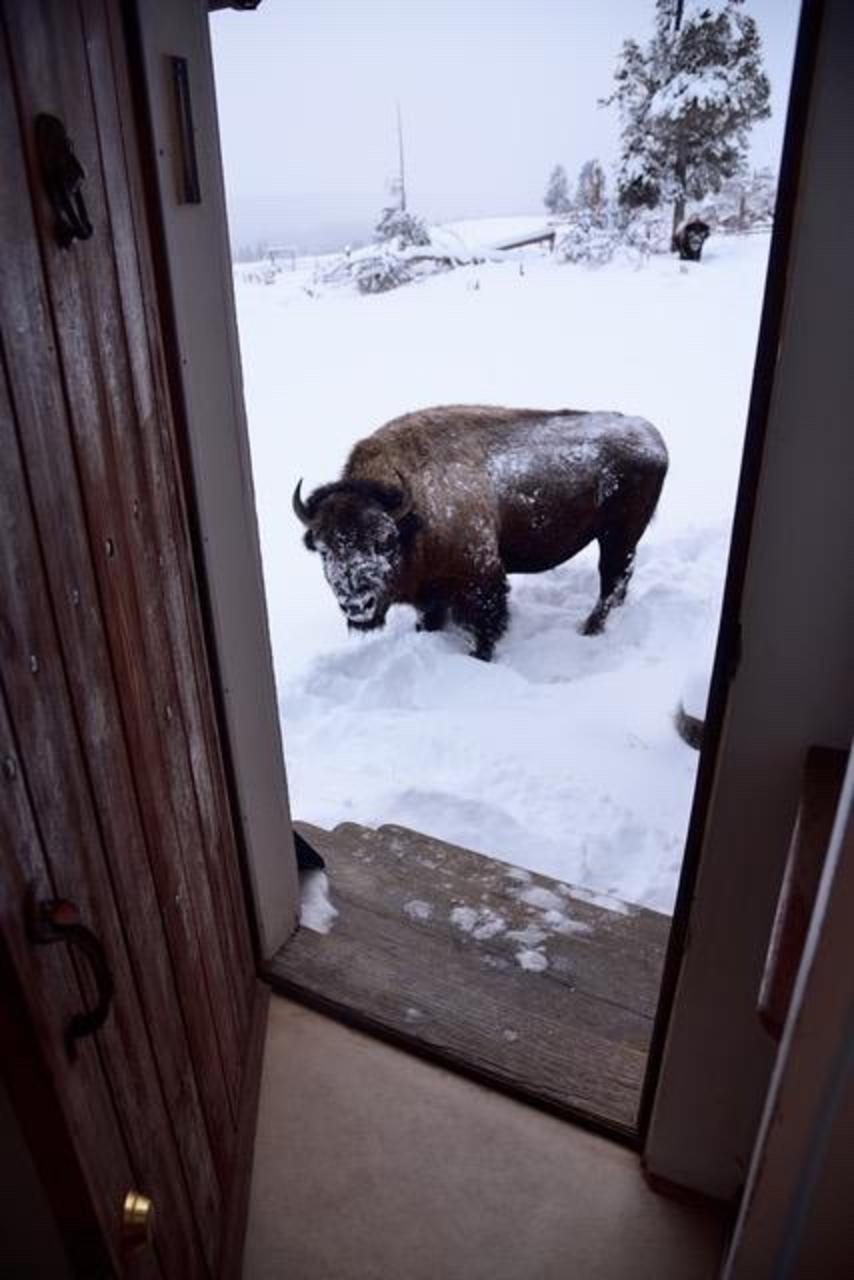 Fuller took the photo recently from his front doorstep at Canyon. Fun fact: He has lived in the center of Yellowstone for almost 50 years. During this time, grizzlies, wolves and mountain lions have been a regular part of his wild neighborhood as well as rutting bull elk and temperamental bull bison. Number of times Fuller and/or members of his family/guests have been mauled by a grizzly, eaten by wolves, attacked by cougars or gored by wapiti and bison: 0. Co-existence has worked for Fuller by moving mindfully and respectfully through the landscape. Photo courtesy Steven Fuller.
As a winterkeeper I’ve sometimes asked myself, when while taking the garbage out, and the snowmobile tipped over on the wrong side of a snow drift and it takes me an hour to dig it out and to upright it, “where’s the f’n romance!” But still, it beats the lives of noisy desperation many of us live in the congested man made hives we are born into and in which many of us live out our lives.
More and more virtual realities trump organic realities. There is little opportunity for us to live the reality of that part of the American dream. In Yellowstone, as everywhere on the planet, the pace of change continues to rapidly accelerate.
The g-forces as we accelerate up the exponential curve that defines our time threatens to shake the machine to pieces and to render the monkeys in the capsule mad. Let us take the opportunity to touch something of the green world while it still exists before the fires of our hubris take it all away. 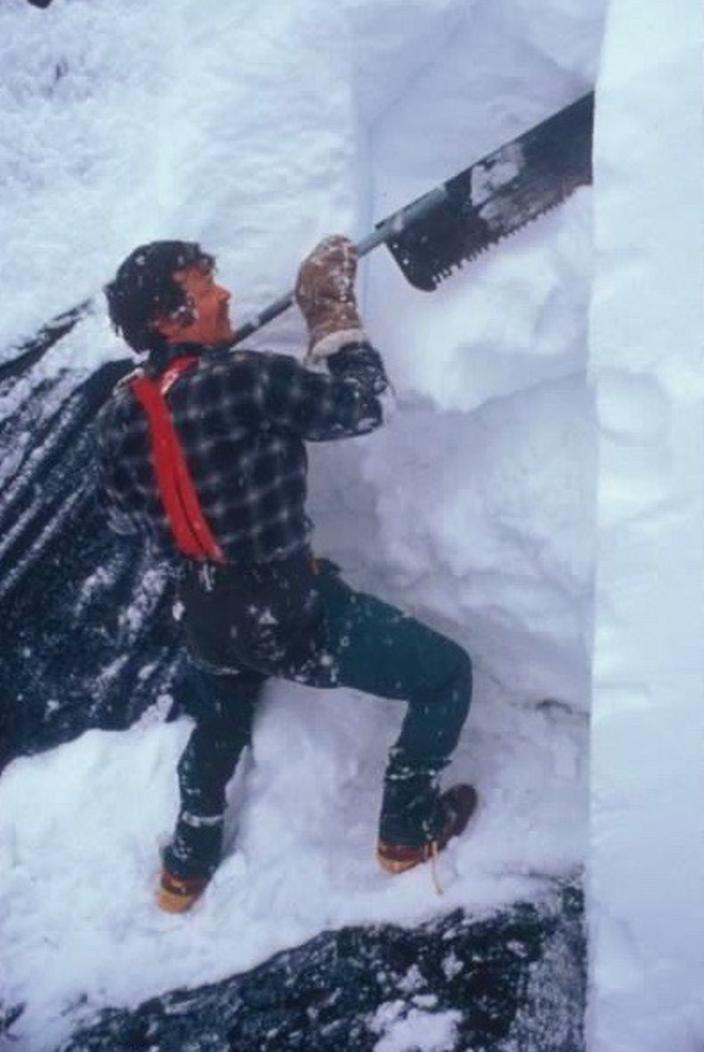 Fuller in his younger years removing slabs of snow from park rooftops.
Thoreau moved to the woods to learn to live deliberately, to front only the essential facts of life and to see if he could not learn what it had to teach, and not, when he came to die, discover he had not lived. Still relevant. Below I share some recollections of a few of the pleasures that have been mine in this most recent season of transition It’s been awhile since our last interlude together.
As I recall it was springtime when my duties as winterkeeper shifted from a tenure of quiet seclusion to ramping up for the annual mass human migration when people become the most populous large mammal species in Yellowstone.
It’s easy to get caught up in operational distractions and those inevitable, sometimes mortal circumstances that are part of life and normal aging. What drives this place and what has given me grounding is heeding Yellowstone’s rhythms, her currents of energy and what could be explained as spirit, the kind that could never be described or explained in a guide book. What does it look like?
FURTHER MOJO READING:  Twilight Of The Winterkeepers, a profile of Steven Fuller by Todd Wilkinson
NOTE: Steven Fuller has returned and will be contributing regular photo-essays about Yellowstone through his exclusive Mountain Journal column A Life In Wonderland.  Keep checking back.