Forty years ago, Steven Fuller wrote about the park's cold extreme isolation. Now he takes a look back 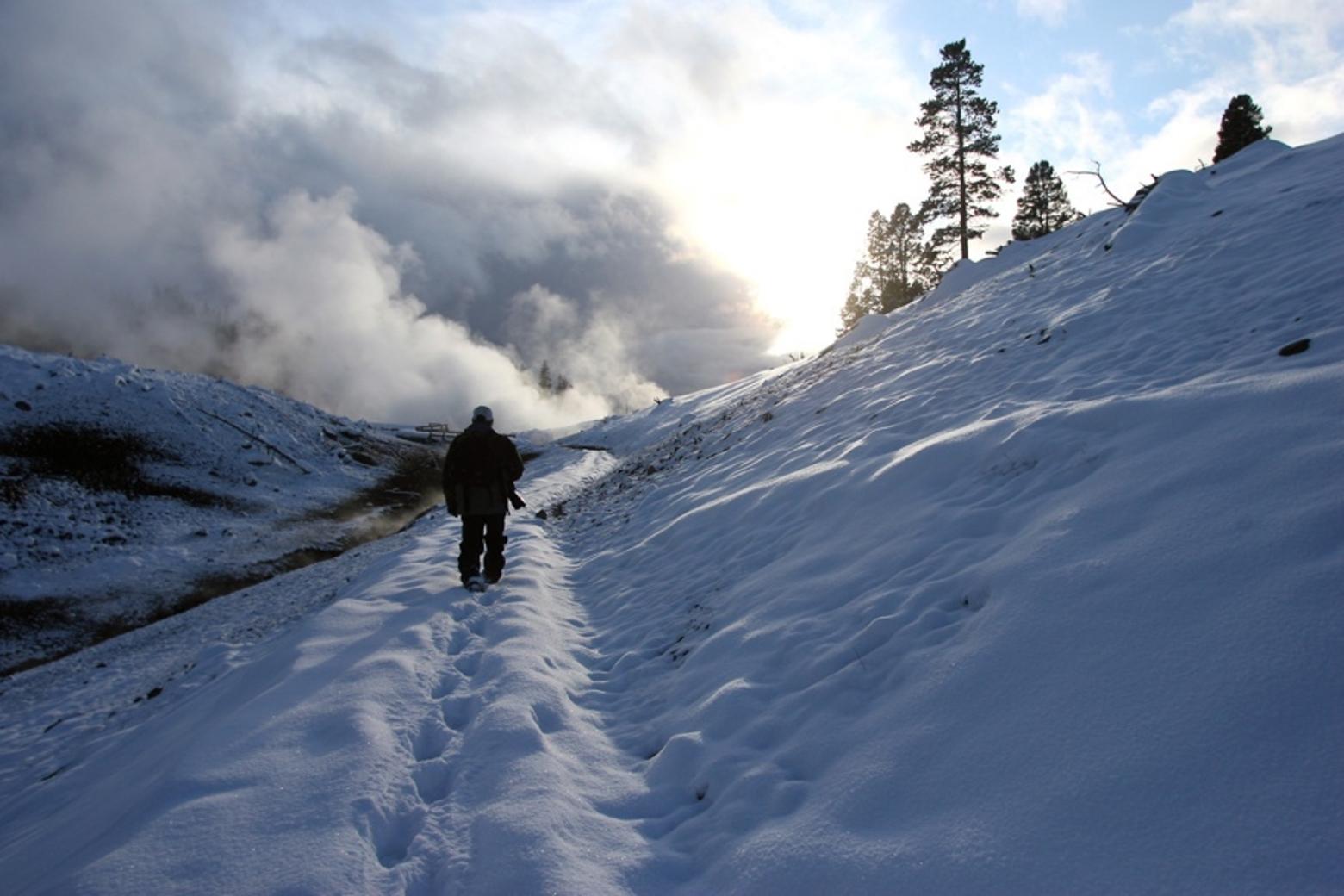 Winterkeeper Steven Fuller ventures into the geothermal mists of Yellowstone. Photograph courtesy Kerry Huller (www.kerryhuller.com) for the Casper-Star Tribune
My longtime friend, Mountain Journal editor Todd Wilkinson whom I met when he worked as a summer employee at Canyon during 1982 and 1983, asked me to reflect on an article I wrote for National Geographic magazine. “Your article piqued my original interest in coming to Yellowstone,” he told me.
The story I wrote and photographed, “Winterkeeping in Yellowstone,” appeared in the December 1978 issue of National Geographic. 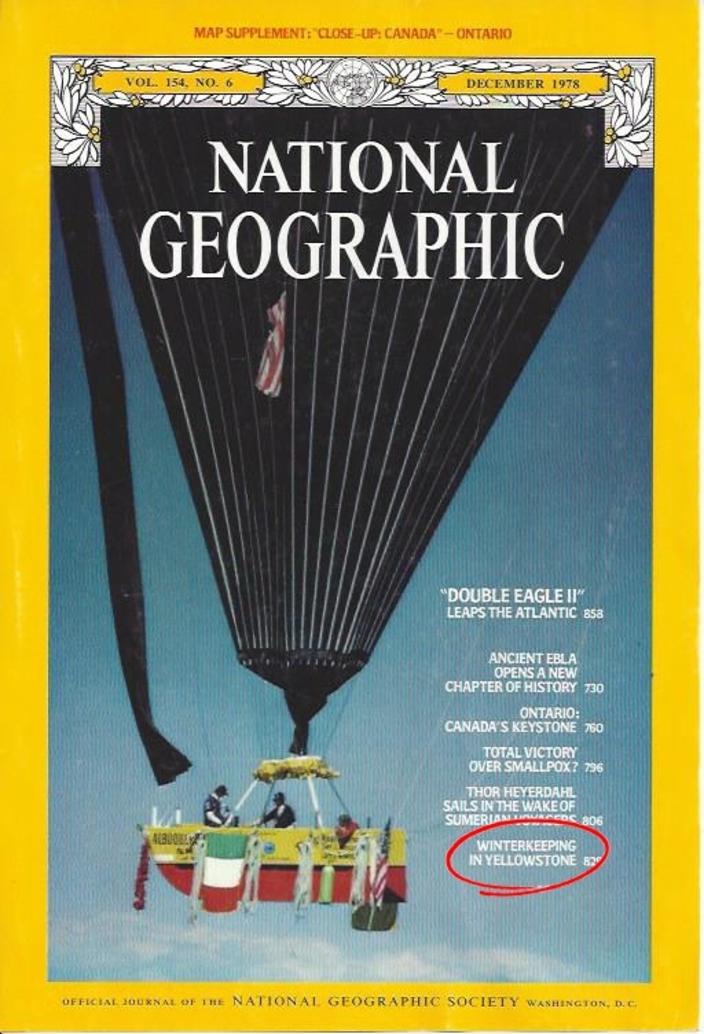 Reading the article for the first time in four decades was poignant. I was smitten by how much was familiar yet at the same time foreign.  The same place, Yellowstone, and the same house, but re-reading the piece was a visit to a vanished epoch of my life.
Angela has been gone from Canyon thirty years now, while Emma and Skye, our daughters, have grown into middle age.  The 21st century Yellowstone that still surrounds the house and defines my world is different from the one I knew when I landed here in 1973. Nature’s Yellowstone is still mostly the same, but Man’s Yellowstone is much changed.
The article in National Geographic appeared five years after I was hired starting October 1st, 1973, as the Canyon winterkeeper by the then-concessionaire, the funky old Yellowstone Park Company.  I wish I could say that I was selected because my impeccable professional credentials or that I prevailed over a pool of competitors hundreds strong.
I got the job because I was the only applicant.  It paid $13.25 a day.
In my youth, I had a yen for travel that led me to Europe, Africa and Asia. After ten years of wandering it was time to find a place to put down roots.  I recognized the Canyon winterkeeper’s job on first sight as what I had been looking for and what I needed.
Here was an opportunity to live a romantic part of that unique American cultural dream, Natty Bumppo,The Leather Stocking Tales, all over again.  A self-sufficient life on the frontier of a wilderness not yet citified and tamed by bourgeois law and order in an unwounded landscape, unlike so much of the despoiled world I had seen. 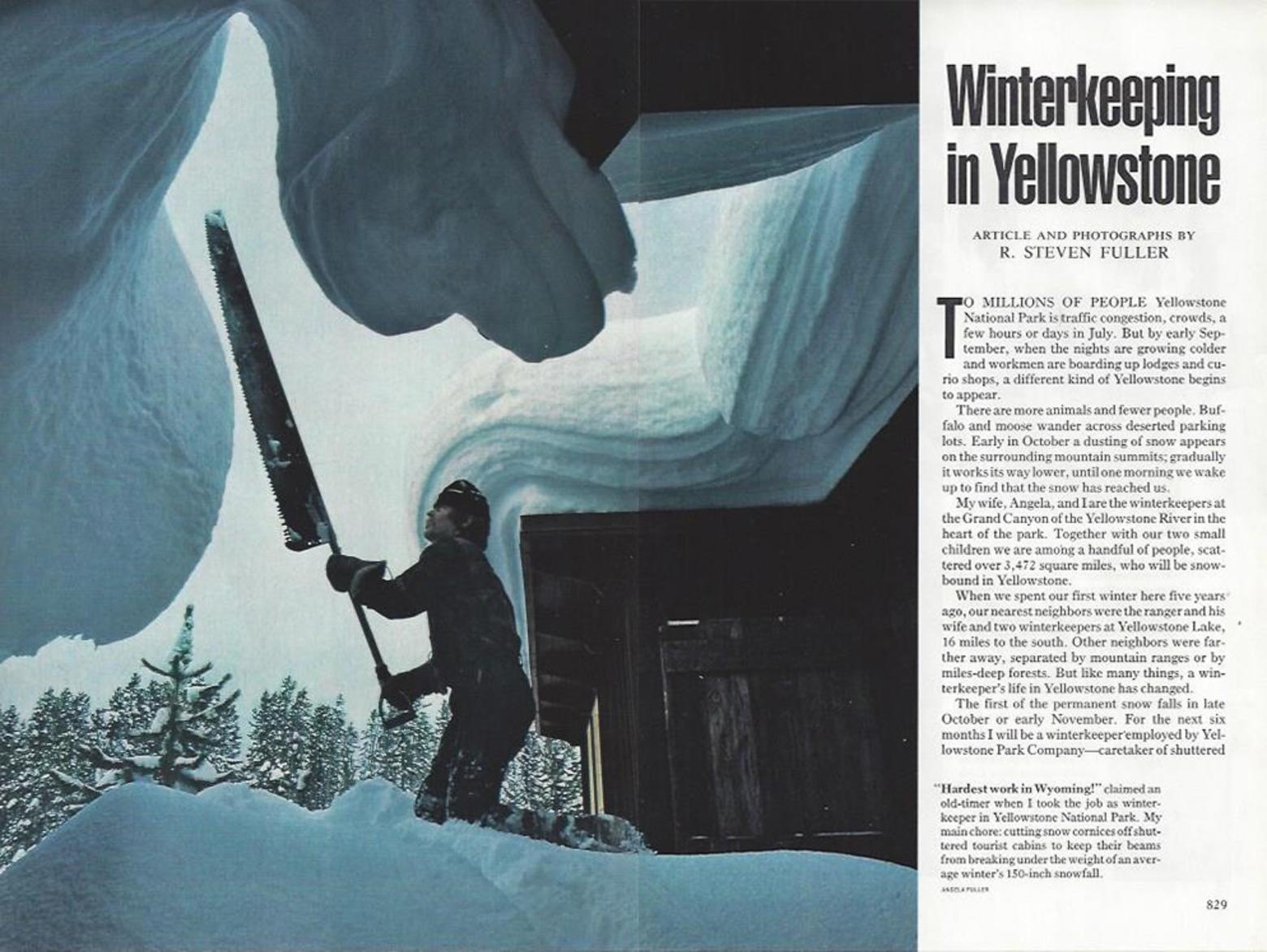 Steven Fuller's story was widely read and served as a touchstone for millions desiring to hear about a side of Yellowstone most never see.
Here was an opportunity to live in a landscape replete with most of its original wildlife. “Need a helping hand?...look to the end of your arm”, was the ethos. In the early years winter in Yellowstone fulfilled this vision very nicely indeed.
To the two million visitors that came here during summer, running from roughly Memorial Day to Labor Day, Yellowstone was known for its begging bears along the roadside and gateway towns filled with souvenir shops whose profitability was based on the maximum take during the manic tourist season, known to the locals as “the salmon run."
When Angela [then a British citizen] and I moved into the Canyon winterkeeper’s house our nearest neighbors were 19 miles away on the north shore of Lake Yellowstone.  They consisted of the legendary ranger Jerry Mernin and his wife Cindy, and two old time winterkeepers, Jerri Bateson and a guy known as ‘Silent Joe”, whom I never met.
Nineteen miles was a long way in those days via primitive snowmobile through the wild Hayden Valley often deep with drifting snow and white-outs. If you got stuck or suffered a fuel-line freeze up in a bitter cold whiteout in the middle of the valley, you could perish. The only other social alternatives were 40 miles west, or 36 miles north, in two small park gateway towns; otherwise, there was not a resident human soul twixt here and anywhere. 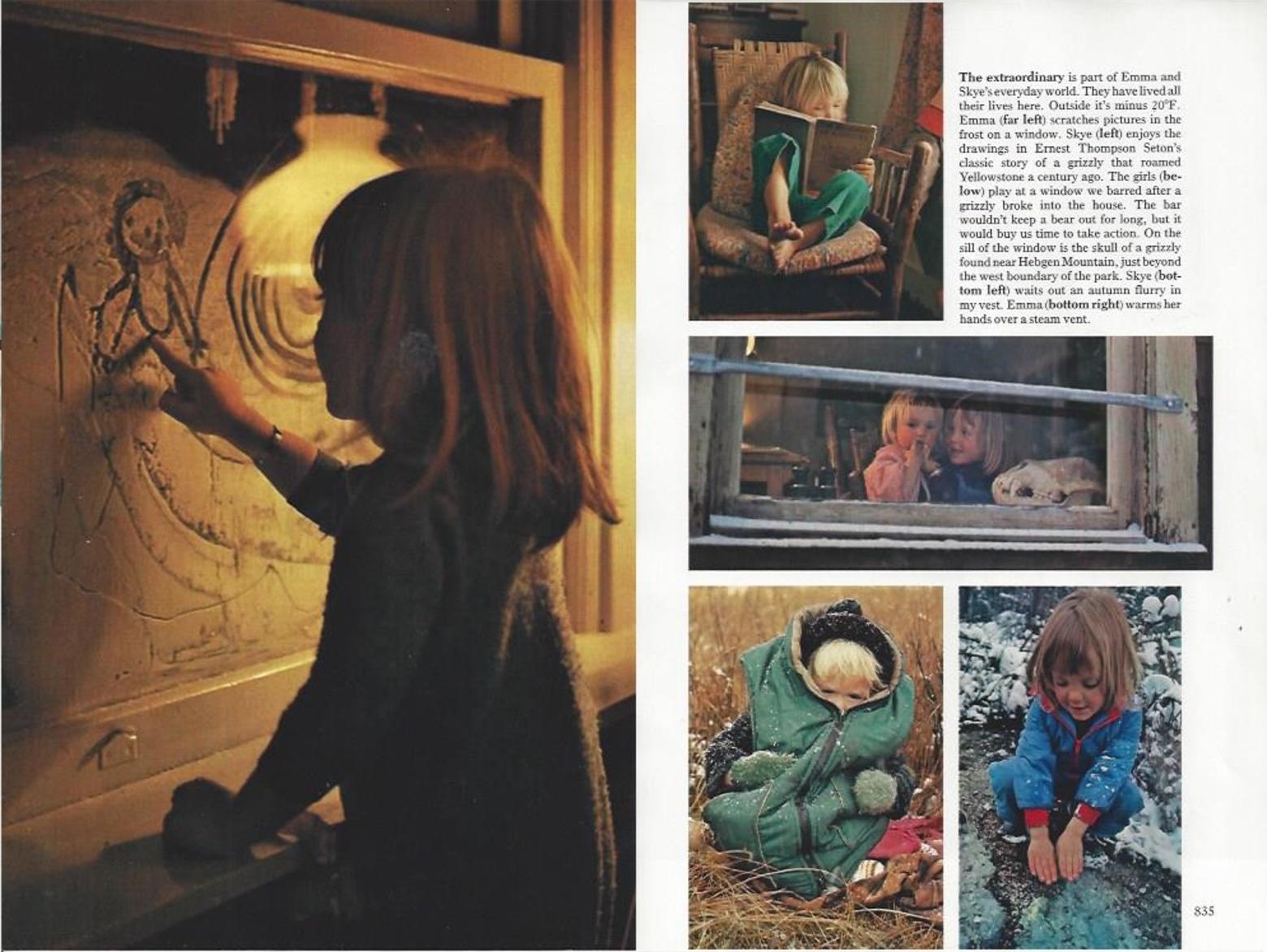 Steve and Angela Fuller raised and homeschooled their daughters, Emma and Skye, at Canyon. It was a matchless education and a life that will forever be imprinted upon their identity. Here, at left, Emma uses a frost-covered window as a drawing board and, at right, reminders of their growing years. This spread appeared in National Geographic. All photos by Steven Fuller
We had a landline telephone, mail came more or less monthly, I had a short wave radio on which to listen to the BBC North America service.  I subscribed to the weekly tissue paper air edition of “The Guardian/Le Monde/Washington Post”, which usually arrived in outdated clots of three or four copies.
Ours was a world without cell phones or internet.  The concept of selfie and texting was a generation away from conception let alone universal realization. Then there were no devices available to immediately share with the rest of humanity your every move, or location, or evidence of existence, so contemporary post-moderns may confuse “solitude” with existential “isolation”.
To me solitude has always connoted a quiet space away from the white noise, both inner and outer, that isolates us from our opportunity for self-realization. 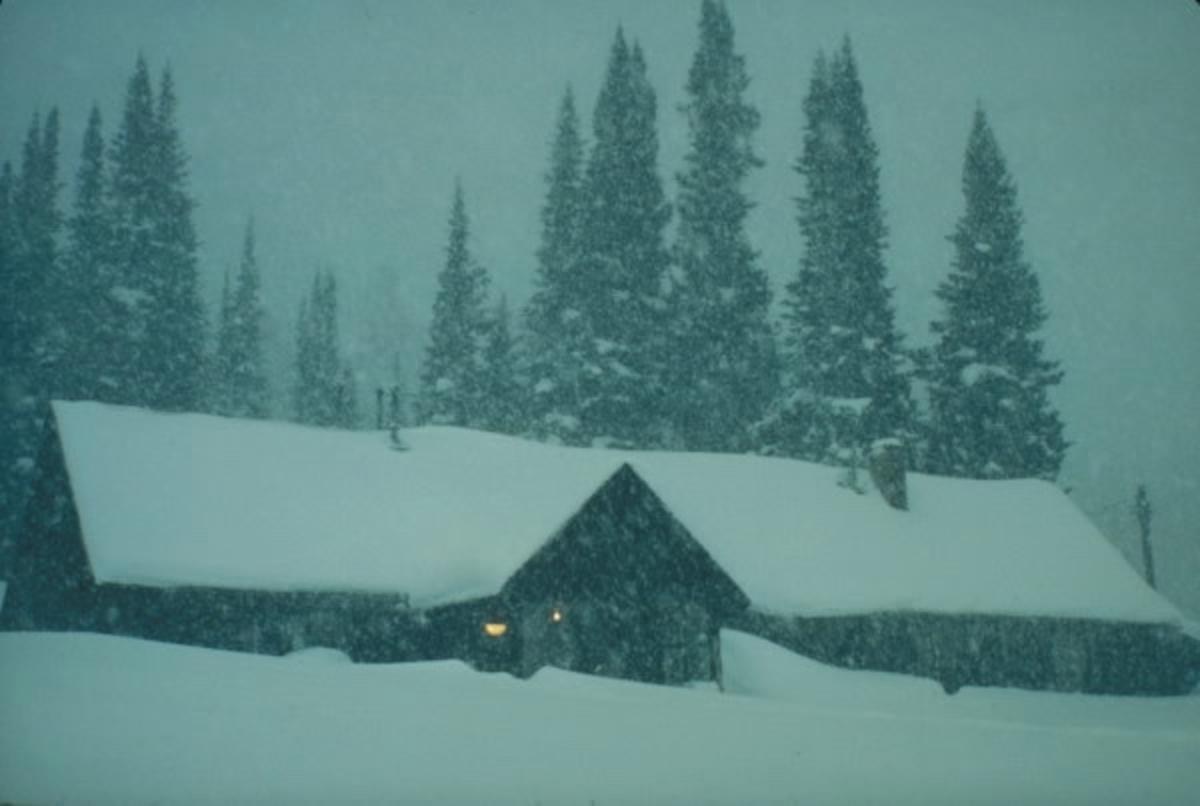 At Canyon, the electricity often went out, once I recall for two weeks, but we had Coleman lanterns and candles and a propane fired refrigerator and our young daughters, Emma and Skye, found power outages opportunities to invent novel new games.
We arrived at Canyon with Emma, a toddler then at 18 months.  A year later her sister, Skye Canyon, was born two days after the winter solstice, in the doctor’s office in West Yellowstone, Montana, 40 miles away.
Emotions rush forward now thinking about the magic of young children in a magic place.  Emma and Skye started riding horses in diapers on my saddle in front of me and began skiing shortly thereafter. We started winter camping by the time Skye was five and she was independently ski capable.

To me solitude has always connoted a quiet space away from the white noise, both inner and outer, that isolates us from our opportunity for self-realization.

As a family, or with their English mother, they went to England every year and so were comfortable in both worlds, unintimidated by public school boy toffs or by arrogant Wyoming ranch boys.
We homeschooled them, we had both taught in East Africa, until their interests shifted from the home to their peers and so Angela and the children wintered at the north entrance to the park during the school year, while I continued living and working at Canyon.
After graduation Emma, with a degree in Central American Studies, traveled the world.  She worked three seasons at the South Pole, and in the course of a decade visited 46 countries until she married a grizzly bear biologist and settled in Livingston, Montana, 60 miles north of the park.
Skye took her degree in Anthropology and spent five years in LA working for the Natural History Museum before moving to Reno, Nevada and then taking a job with Patagonia, the environmentally active outdoor clothing company.
Winterkeeping—the “toughest job in Wyoming” an old timer told me when I took the job. I thought he was trying to scare me off, but there was a grain of truth in what he said. 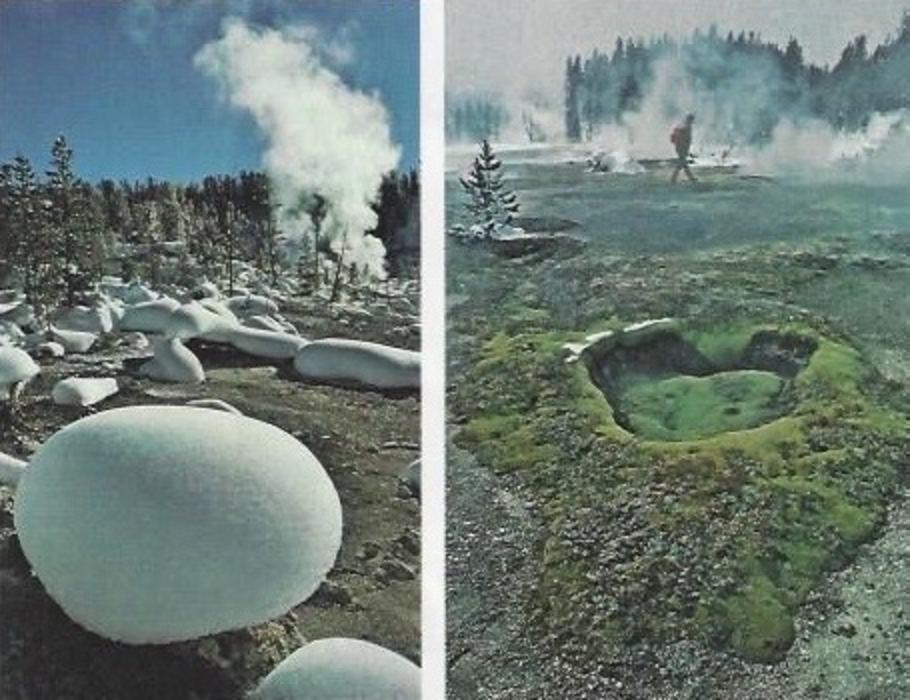 These photos appeared as part of Fuller's photo illustration for National Geographic. The image on the left features "snow pillows"; on the right is a walk through the Shoshone Geyser Basin while on a winter backcountry ski trip.
The old Canyon Village, the tourist facility a mile north of the house, was built in the 1950s. The Village had a hundred buildings and I was responsible for seeing that none of them collapsed under their winter snow load.
Early one winter the junk snowmobile I had been given broke down.  I took the one-lunger engine out, cradled it in my arms, and skied it down to the highway and put it on a snowcoach in order to get it down to the company repair shop forty miles north.  I never saw it again.
I spent that winter skiing to and from work a mile away, where I hauled a ten-foot aluminum ladder, two steel coal shovels, and my eight-foot snow saw on my shoulders from building to building in order to cut the snow cornices off each and every one of them.  I never gave it a thought; "it was what it was" and maybe that old timer had been right.
I came to pleasure and take pride in the craft of the winterkeeper, in the knowledge of the properties of snow and of the hand skills required by the work, how to quarry great blocks of snow with a minimum of energy and a maximum of artistry as I wielded my saw, listening to its’ song as it danced over my head. (see Thomas Merton’s translation of Chuang Tzu’s “Cutting Up an Ox”).
In that early decade of our life in Yellowstone the summer people season was short. Canyon Village catered to visitors from mid-June to mid-August.  At the end of the season, as the plumber, I helped shut it down, winterized it, and by September the park went quiet.
Closures for bears, done for “resource protection,” were few then, so I could range most wherever and whenever I wished.  In April I mingled with buffalo cows while they gave birth. In the autumn I usually horse packed solo into the remote Mirror Plateau, and in winter I skied and camped at will.  No permit required, simply be thoughtful and gentle, and do no harm.
But, like everywhere on the planet, the press of people in Yellowstone continues to follow the familiar exponential curve characteristic of recent human history.
With so many visitors, 4.25 million this last year, almost all of whom are urban and to whom Yellowstone outside their vehicles is an alien planet, ever more rules and enforcement are the only way to protect “the resource”,  i.e. that Yellowstone we threaten to “love to death” from harm and visitors from self-harm.
No one will ever again know this, our Canyon neighborhood as we once did. 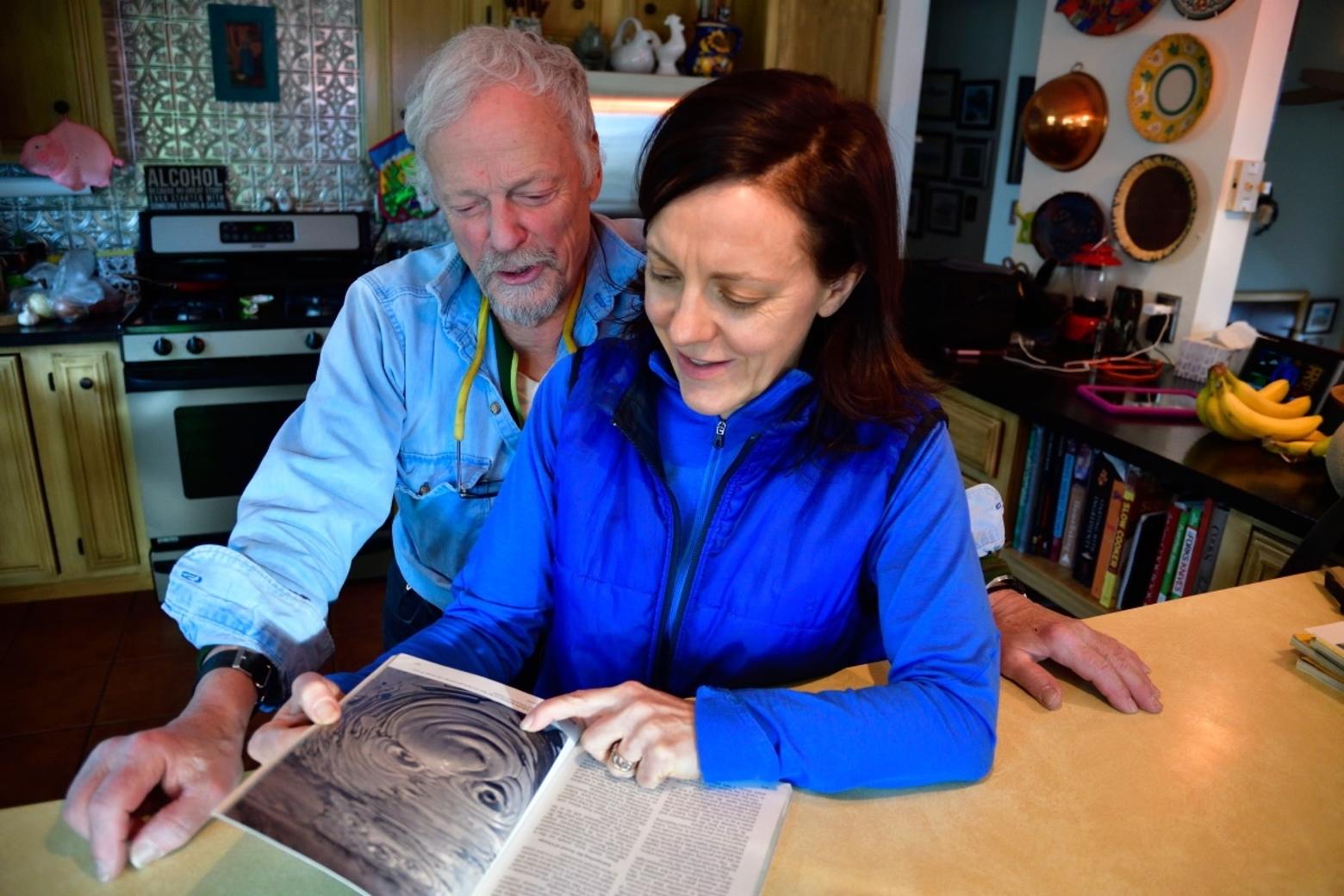 Fuller and his now-grown daughter, Emma, flip through the pages of National Geographic's 1978 issue in which Fuller chronicled his family's life in Yellowstone and his adventures as winterkeeper. Photo by Joe Sawyer
Click here to read all of Steven Fuller's journal entries for "A Life In Wonderland" and this Mountain Journal profile of Fuller, "Twilight of the Winterkeepers"

Amid Partisan Jousting And Talk Of Government Shutdown, Why National Parks Matter
One teenager's desperate pilgrimage to see Old Faithful erupt is reminder of why we need grown adults making decisions in Congress...
Read
Back to home