Out His Picture Window A Glimpse Into The Post-Holocene 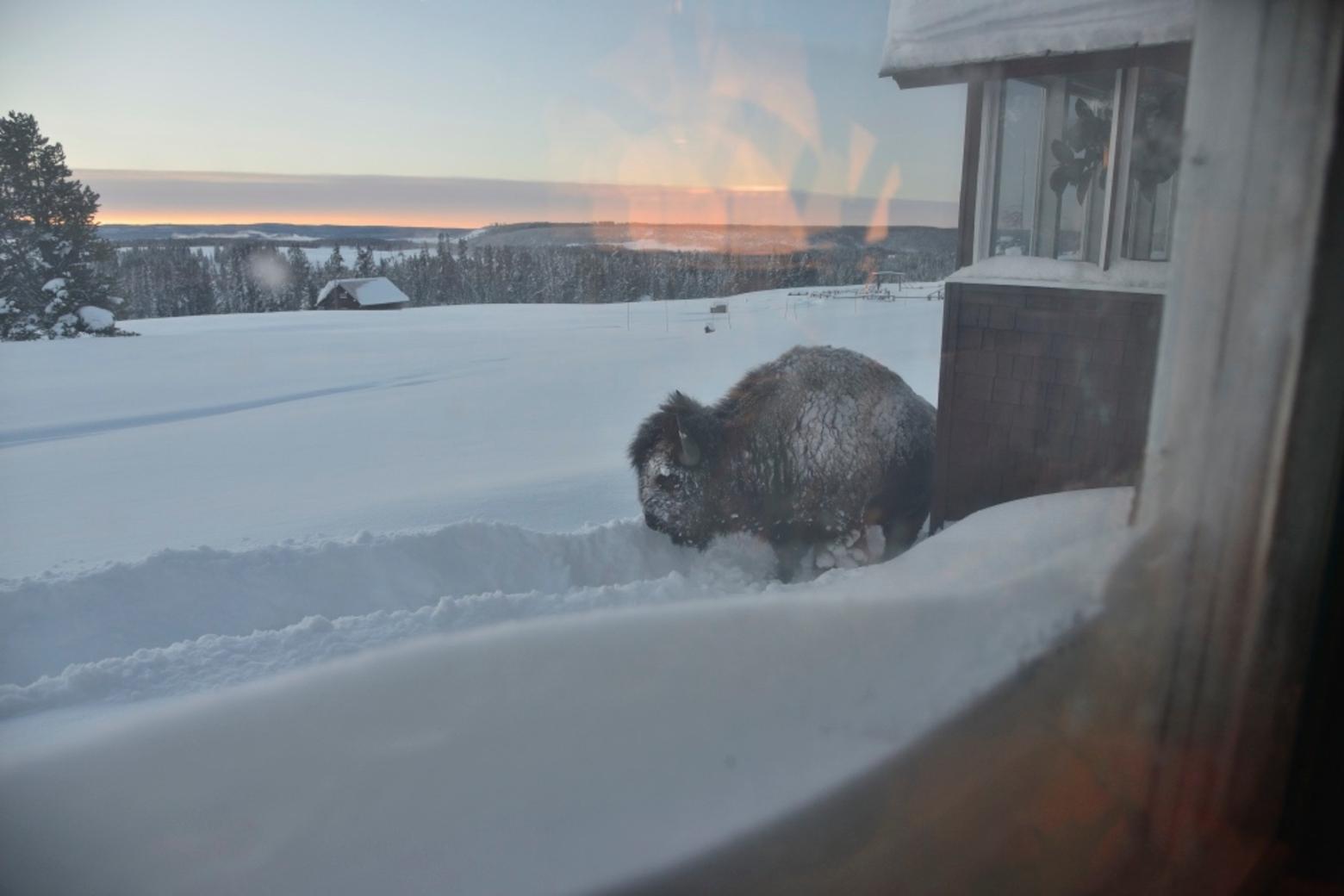 Steven Fuller observes: "Early in the winter some of the half dozen bull bison/buffalo that hang on in the meadows around the house come up right next to the house to take advantage of the summer sun dried graze that is accessible in the shallow snow shadow around the perimeter of the house, as seen through my living room windows."
Buffalo have been at home in the sunlit meadows on which my house sits since the blooming of the Holocene Spring and the greening of the central Yellowstone Plateau that followed the melting of the most recent North American glaciation 11,000 years ago.
I have had the pleasure of living in some degree of intimacy with buffalo these past 45 years and without exception I have found them to be most tolerant and agreeable neighbors.  I respect their bubble of space and read their body language which is the means by which they communicate with their own kind as well as with us alien species. We have enjoyed a congenial, convivial relationship during my brief tenure here. 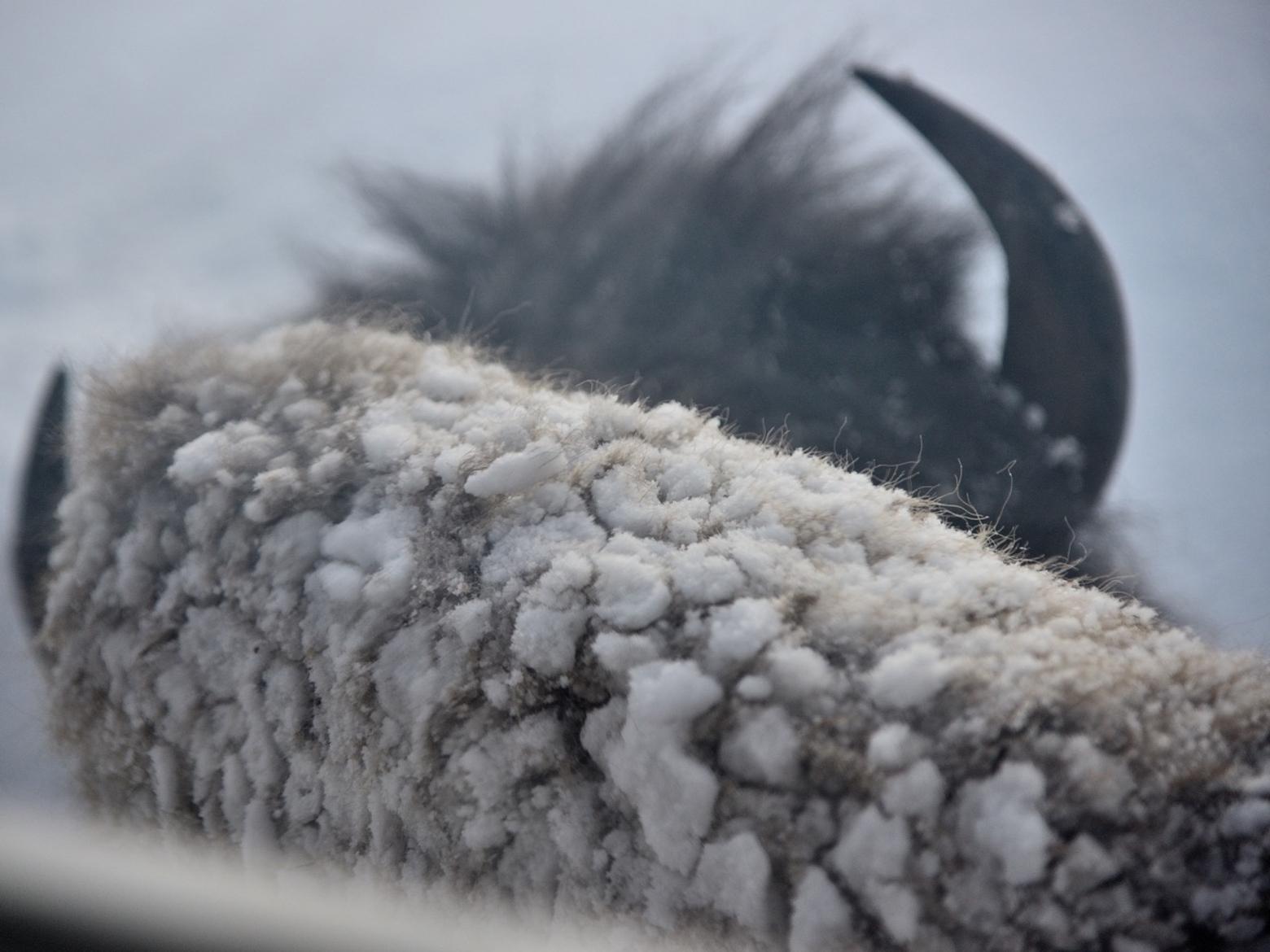 "Recently, as I was grinding my morning coffee beans in the kitchen, my cats indicated that there was a being of interest directly below the windows on our enclosed front porch," Fuller shares. "Pressing my face against the glass I saw, then could hear this bull grazing directly below me. Occasionally his horn bumped the exterior wall of the house below my feet. But for the window glass I could have reached out and touched his back." Photo by Steven Fuller
The American bison survived specicide by a whisker and Yellowstone, only by its isolation, was a last refuge.  But like all of the creation, in this narcissistic anthropocentric end of times in which we find ourselves (know it or not), all beings and places survive only by our benefice. All things, secular and holy, are monetized, tis the only criteria of value.  So deconstruction of the Creation is deductible from our bottom line.  Mammon is our idol.
And so, bison are anathema around the perimeter of the park to the traditional livestock interests “bar room vs. science biology” as well as to the wealthy urban newcomers who are fearful of the nature they have come to enjoy.
Unfortunately, few visitors to Yellowstone speak “Buffalo” and so what we got here is a failure to communicate with the result that more park visitors are injured by bison than by any other animal. 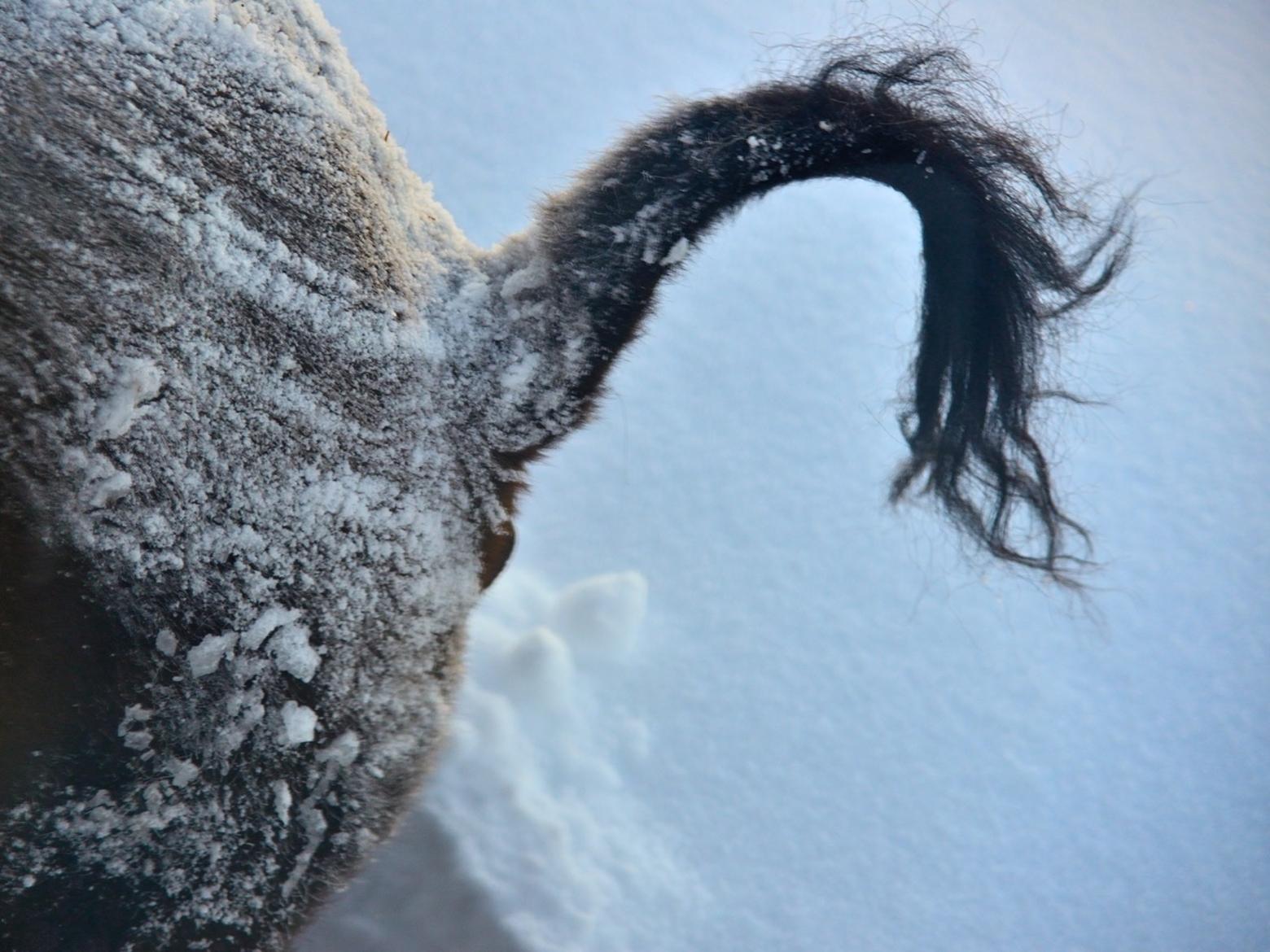 "Tails are wonderful appendages," Fuller offers. "They are signal flags that communicate an animal’s state of mind and a fly whisk to protect vulnerable portals. Pity we have lost ours but for the vestige coccyx, which has no independent wag left in it. Since wolves were re-introduced buffalo with only a stub of tail are a not an unusual sight…I presume they lost their tails when they were young to raw jerky stick loving wolves that enjoyed the sport of snatching tails…capture the flag!."
Visitors quite naturally are thrilled by the sight of this archetypal animal who in summer is usually day bedded in a dust wallow, chewing cud and, swishing tail to discourage annoying insects.  But, exuberant visitors inevitably mimic a Paleolithic hunting party as they surround the poor beast in search of their perfect selfie. And so, some naive souls end up horn tossed into a tree or onto a distant spot in the dirt, sometimes having had their groin impaled upon a very large horn.
Buffalo live in the moment, their concerns and the current state of their minds at the moment. When we do not understand their communications they may flee or they may boil up emotionally at our ignorance, and severely punish us for our lack of understanding, or in their view, for our bad manners.

Buffalo live in the moment, their concerns and the current state of their minds at the moment. When we do not understand their communications they may flee or they may boil up emotionally at our ignorance, and severely punish us for our lack of understanding, or in their view, for our bad manners.

The American poet John G. Neihardt’s published “Black Elk Speaks” in 1932.  It is the story of a Lakota Sioux who as a boy followed the buffalo with his people and as an old man sequestered to a reservation wearing trousers, eating corn meal and slow elk.
Black Elk, through Neihardt, spoke of the winged people (birds) and the buffalo people…and of the other beings who share the creation.  Literal anthropological authenticity be damned, the poetry of the book illuminates an alternate reality and reveals some of the hollow places within us.
Speaking as a west European descended American male I have long felt that our relationship with the buffalo is a touch-stone for a useful self examination of ourselves as a people.  a meditation if you please, for retrospection on our larger relationship with this bountiful America of purple mountains and amber fields of grain, this richly endowed continent that we have consistently abused and raped, with occasional gestures to preserve and protect small surviving fragments of an expropriated endowment.
The buffalo people are a useful touchstone for this self examination. That famous notorious photographed mountain of buffalo skulls, let alone countless undocumented pyramids of skulls… "Alas, you poor Yoricks! We never knew you well” and we killed your millions casually, without comprehension or care. 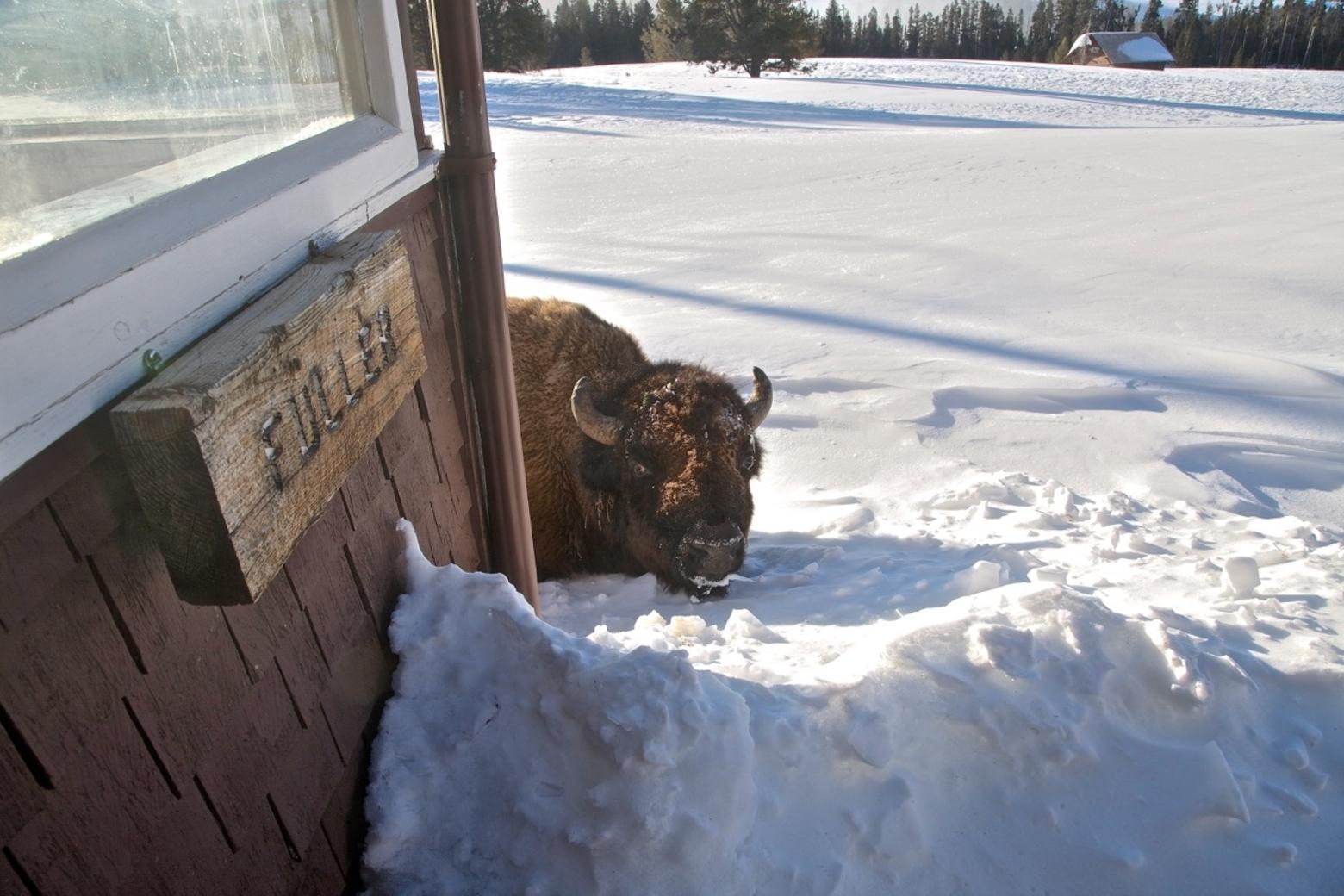 "One of several bulls that spend much of the year, often within sight of the house, and sometimes within a few yards of the door. This bull and I have known each other, that I am aware of, for four years now. He might dispute this and say it has been six or eight years and certainly he would be the more knowledgeable," Fuller says.
Click here to read all of Steven Fuller's accumulating journal entries for "A Life In Wonderland" 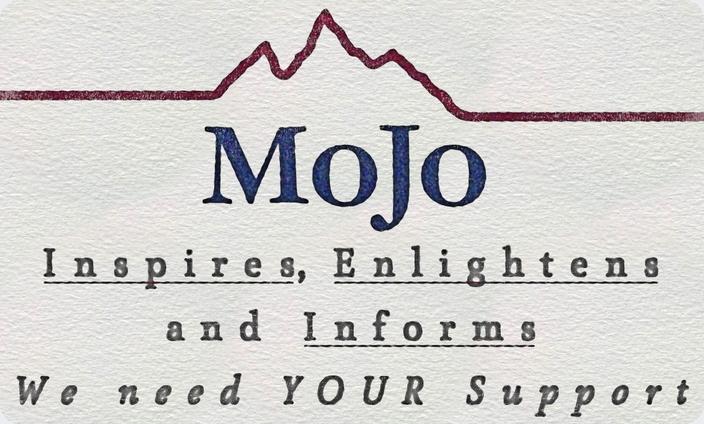 Is Pat Clayton The Finest Fish Photographer In America?
With a sense of urgency, feisty spirit and an incredible eye, this talented witness turns wild trout and salmon into art...
Read
Activism, Mining, Yellowstone

How A Mega-Mine And A 'Law Without A Brain' Were Defeated On Yellowstone's Back Door
A quarter century after a controversial gold mine was stopped thanks to presidential intervention, one of the green Davids who battled...
Read
Back to home