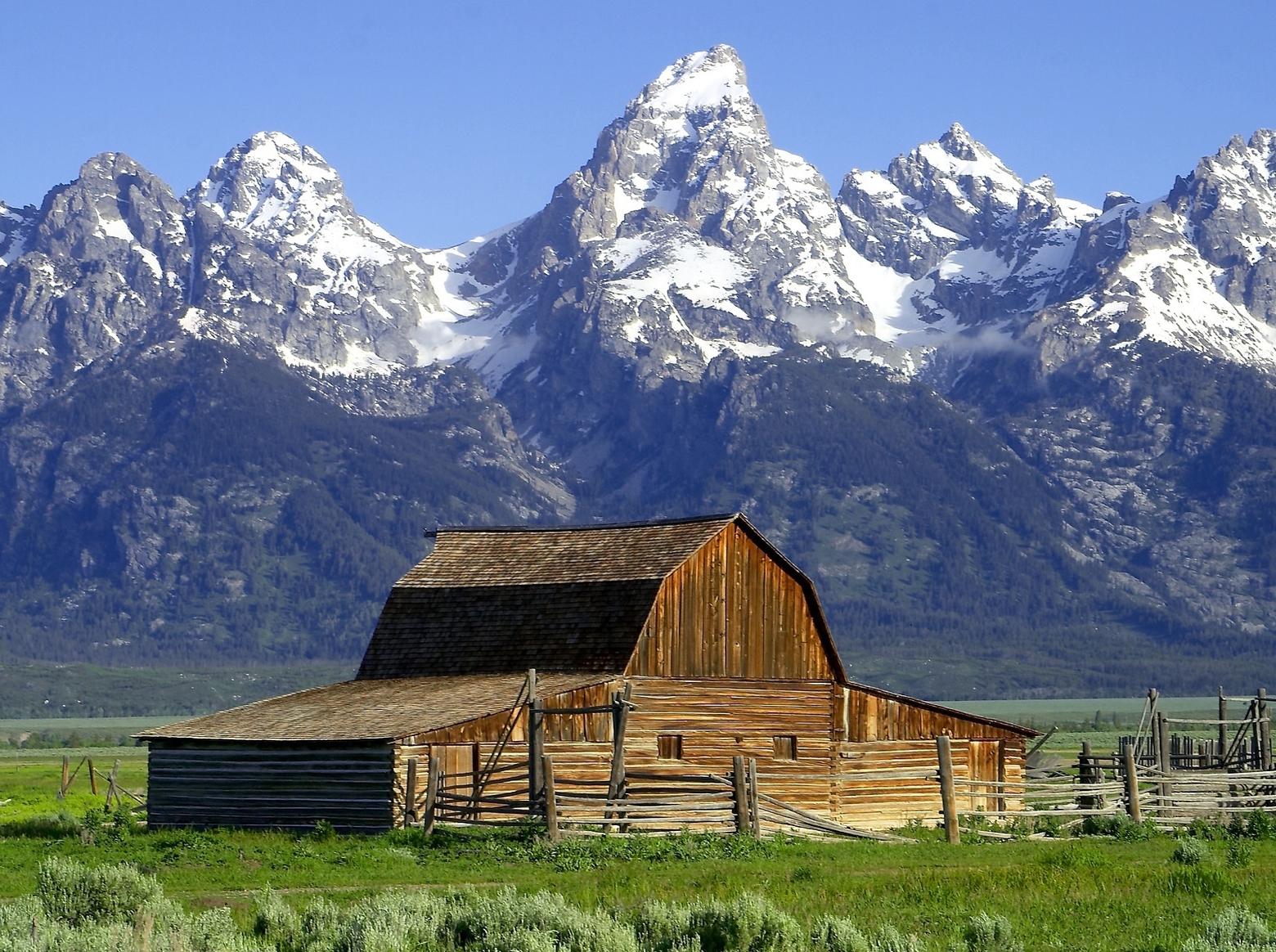 Moulton Barn fronts the Tetons in Grand Teton National Park. Protected lands, wildlife and a healthy environment have fueled Teton County becoming one of the richest counties in America. A national park that started as a national monument, Grand Teton is a bold example of the long-term dividends of conservation as opposed to the short-term whims of boom and bust.
Teton County, Wyoming resides near the heart of the Greater Yellowstone Ecosystem and it is one of the richest counties, per capita, in America. When it comes to confronting the kind of challenging changes hastened by human activity, what is the state of our jurisdiction?

I’d characterize it as one of struggle, an epic struggle with ourselves, to define the value of our natural environment.
Without measures of value for the ecosystem and associated ecosystem services, I fear we cannot meaningfully address how to “preserve and protect the area’s ecosystem in order to ensure a healthy environment, community and economy for current and future generations,” our stated commitment in Teton County's Comprehensive Land Use Plan. 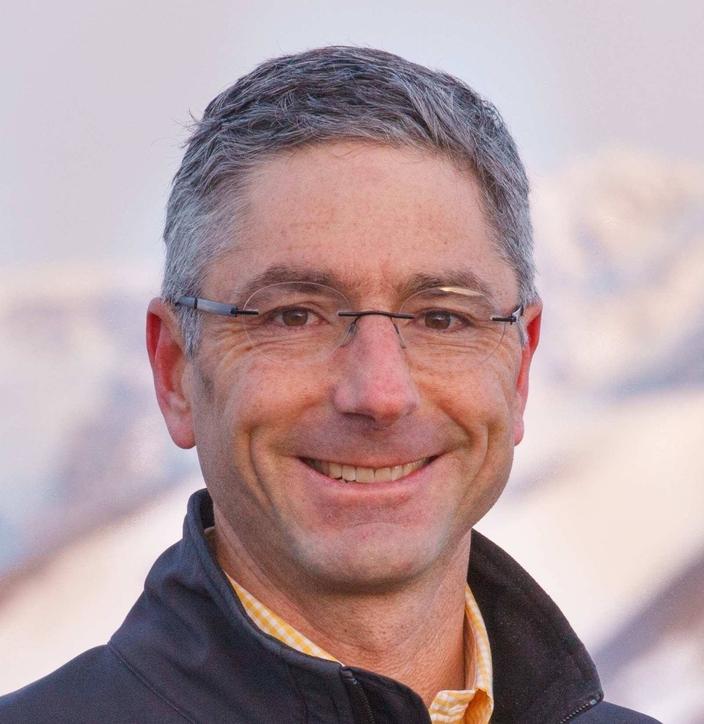 To highlight this struggle, let me ask you this. Defining “the area” as Teton County, Wyoming, what is the dollar value for an intact, healthy, resilient ecosystem? If you’re like me, you don’t even know where to start.

The remaining 2 million or so acres are public lands, much of which are to be conserved mostly unimpaired for future generations. About 45 percent of the county lies within Grand Teton and Yellowstone national parks; some 51 percent lies within the Bridger-Teton and Caribou-Targhee national forests, including significant tracts of "Big W" wilderness in the Teton, Jedediah Smith and Gros Ventre wilderness areas. And about 1 percent lies within the National Elk Refuge.

All that public land harbors substantial wildlife populations. You likely know better than I. We have around 10,000 to 15,000 elk, a bunch of buffalo, five or six hundred grizzly, wolves, coyotes, a few scraggly moose (I guess I wouldn’t look so good either if I had to stand around outside all winter eating nothing but celery).

Undeveloped public land keeps our air clean—imagine if all of the county were private, how much air pollution would be trapped in our valley during winter inversions.

And undeveloped public land by and large provides the bulk of our opportunities for recreation in all it’s modern forms.
So, taken as a whole, what is this area’s ecosystem and the ecosystem services it provides worth to you? It’s an estimate, at best. Hardly even educated. Am I wrong? 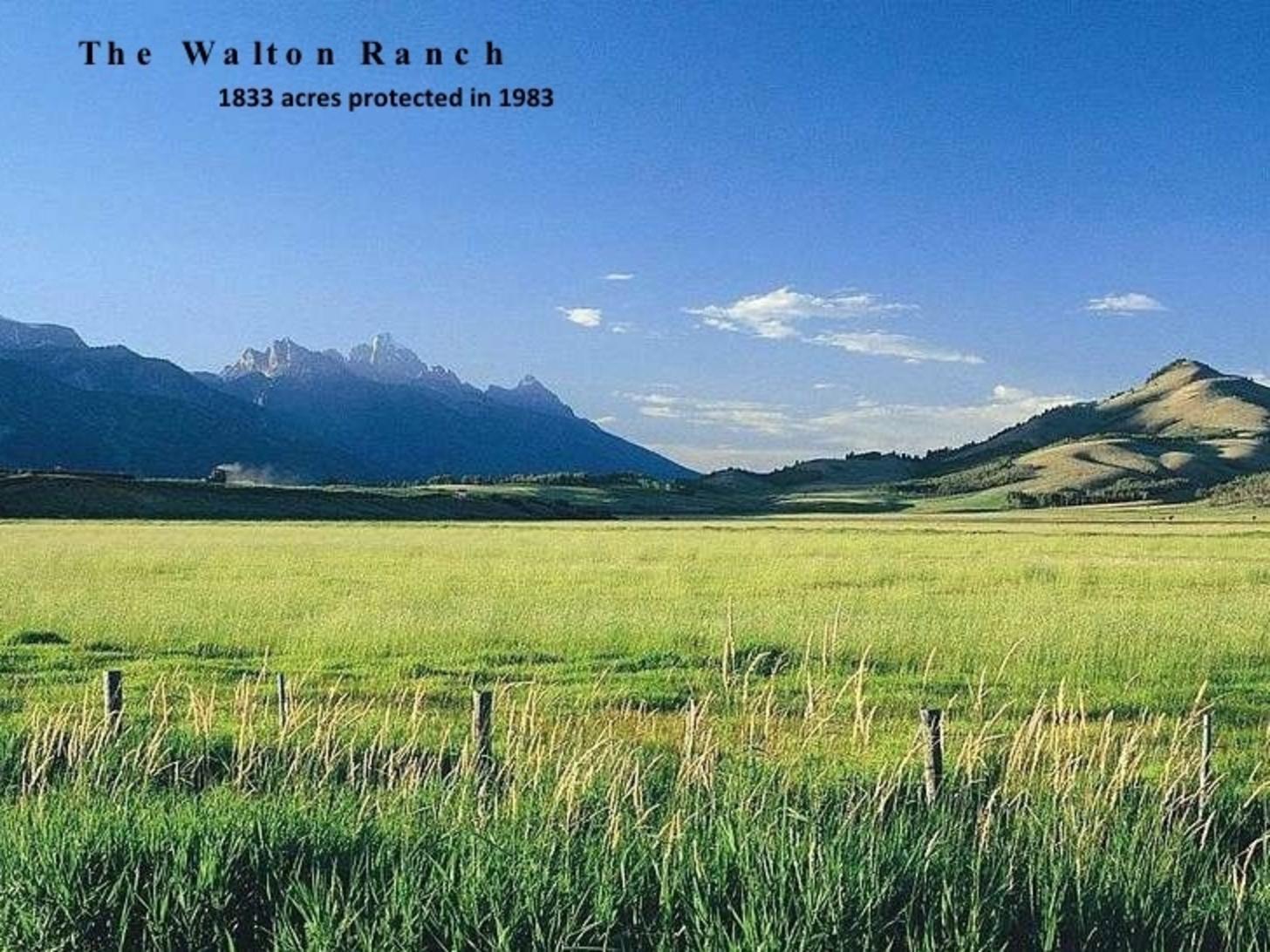 The Jackson Hole Land Trust has not only done an extraordinary job of protecting open space, it has been a national leader and reference point for other land trusts to emulate. Knowing it's impossible to outright acquire and protect all of the private property that is crucial to wildness in Greater Yellowstone, Newcomb says a new kind of conversation must be started in every Greater Yellowstone county and community to adopt foresighted strategies before it's too late. Photo courtesy Jackson Hole Land Trust. MoJo encourages you to support it at jhlandtrust.org
Our inability to value ecosystem services, let alone place a value on our ecosystem as a whole, is clashing over and over again with a system of private property rights rooted in principles of individual and economic freedom tracing back to the Magna Carta. Actually I throw that out just to sound erudite. I gather politicians cite the Magna Carta when trying to look informed about such things as personal freedoms.

In fact, thanks to Wikipedia, I found out it was originally about the medieval relationship between the monarch and the barons and less about individual freedoms. Although if it is about medieval power structures, then maybe it is becoming more relevant today than we might like to think.

They’ve included struggles to discern whether 40 acres entitled with six dwelling units and overlain by the county's Natural Resource Overlay should have to cluster those six units, or cluster three, or none. 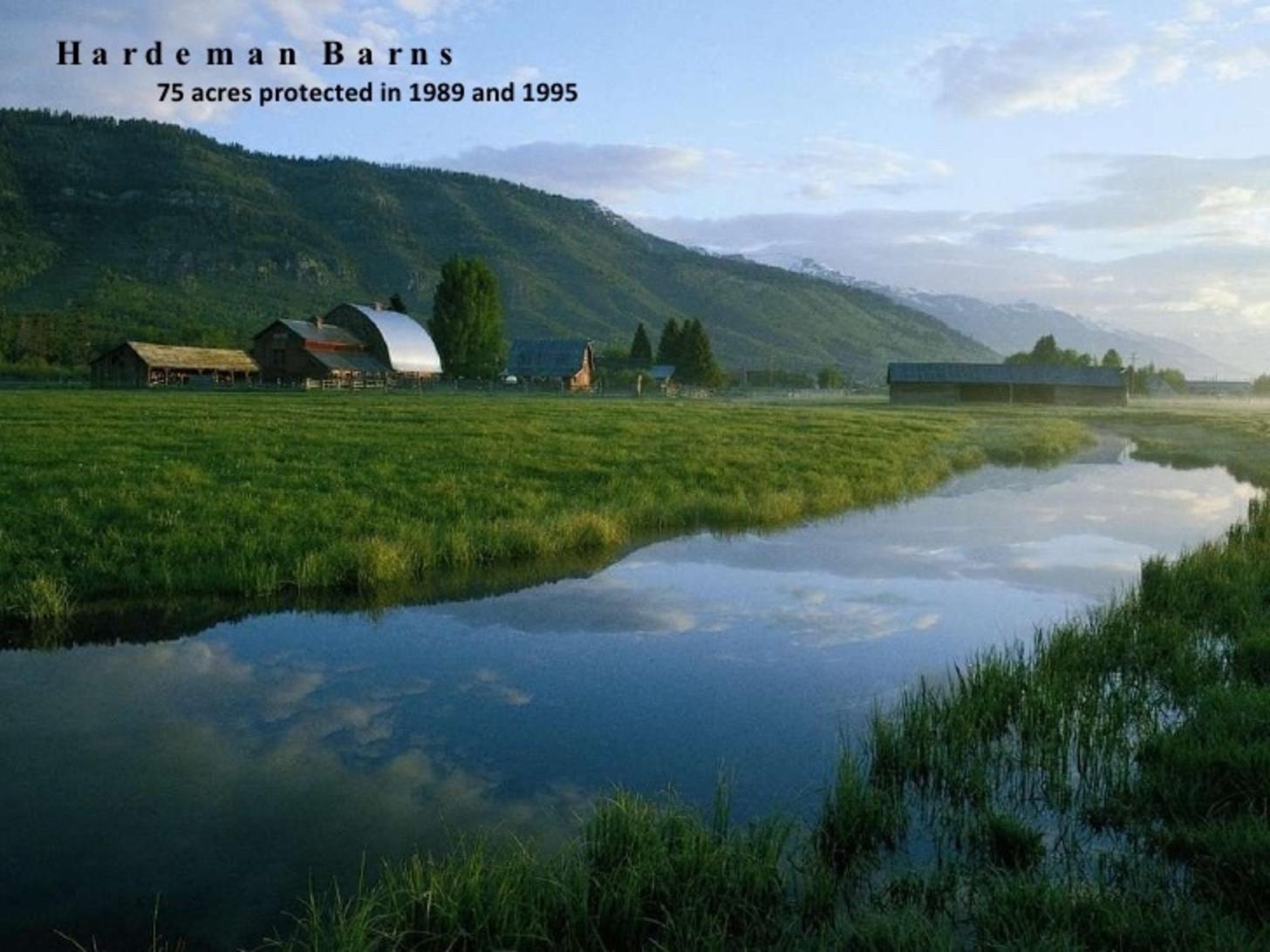 The protected Hardeman Ranch and barns outside of Wilson, Wyoming is another prime example of conservation led by the Jackson Hole Land Trust where community values and a higher good trumped the desires of a few to cover the land with subdivisions.
They’ve been over whether a man-made wave near a trashed stretch of Snake River levy is an appropriate recreational amenity, whether iconic historic structures should be re-purposed to house raptors, whether 21 rural acres should have seven homes or 68, and whether fences to protect hay fields should be allowed to impede elk movement. And I can assure you that each of these clashes has good people, often friends of mine, on both sides.

There are 75 or 80 pages of land development regulations that attempt to strike a balance between the exercise of property rights and the resulting impacts to the community. They lie in Article 5, titled Physical Development Standards Applicable in All Zones. They are onerous. The late Justice Scalia once wrote regarding the reduction, in Supreme Court jurisprudence, of the protections afforded to property rights, that “economic (my emphasis) rights are liberties: entitlements of individuals against the majority. When they are eliminated, no matter how desirable that elimination may be, liberty has been reduced.”

I guarantee that these 80 pages of regs governing what you can and can’t do with your property were not requested by the property owners trying to exercise their property rights. They were requested by neighbors, neighbors expressing a diminishment of their rights to natural amenities such as viable and healthy wildlife populations, natural soundscapes, and scenic vistas. But rarely is there a dollar value attached to said diminishment of ecosystem services, to that one-more-cut in the death-by-a-thousand-cuts of our ecosystem.

The government response, to craft regulations in an effort to meaningfully protect our ecosystem, has been clumsy. As Ronald Reagan said, “The most feared nine words in the English language are ‘I’m with the Government, and I’m here to help.’”
The regs crafted by me and the other commissioners are job security writ large. They leave the system open for constant testing, constant probing for loopholes, so that we commissioners, typically lay people, are forced to rule on even the most minute and arcane aspects of land use law. Expensive and time consuming appeals then leave it to the state District Court judge and Wyoming State Supreme Court to clean up after us.

The system is arbitrary in that it is not rooted in any real analysis, let alone valuation, of the ecosystem services in question. It is arbitrary in that it can result in reasonable development being thwarted because the process is too onerous, or conversely for unreasonable development to be entitled because the cost to challenge it is too high, the pockets of the special interest behind it too deep. It is messy.

And in general, when it comes to these battles over whether any one of those development proposals cited above might incrementally diminish “the area’s ecosystem,” who do you think will win?

The private property owner who can say with a relatively high level of precision exactly how much their property will be devalued by regulation or a blocked application? Or the community and their hand-waving claim that the proposed development impairs the environment and impacts the community?

How can the community rightly claim that the impairment of the ecosystem and cost to the community outweighs the reduction in value of the private property when the community can’t even put a value on what they’re trying to protect?

So…could someone, quite possibly someone who lives here, who wanted to follow in John D. Rockefeller’s footsteps and extend Grand Teton National Park right down to the Lincoln County border at the southern end of Teton County, could that someone cut as many checks as there are property owners, amounting to $15 billion plus dollars, lock up the land and transfer it to the National Park Service, (likely over the dead bodies of the Lincoln County Commissioners)? 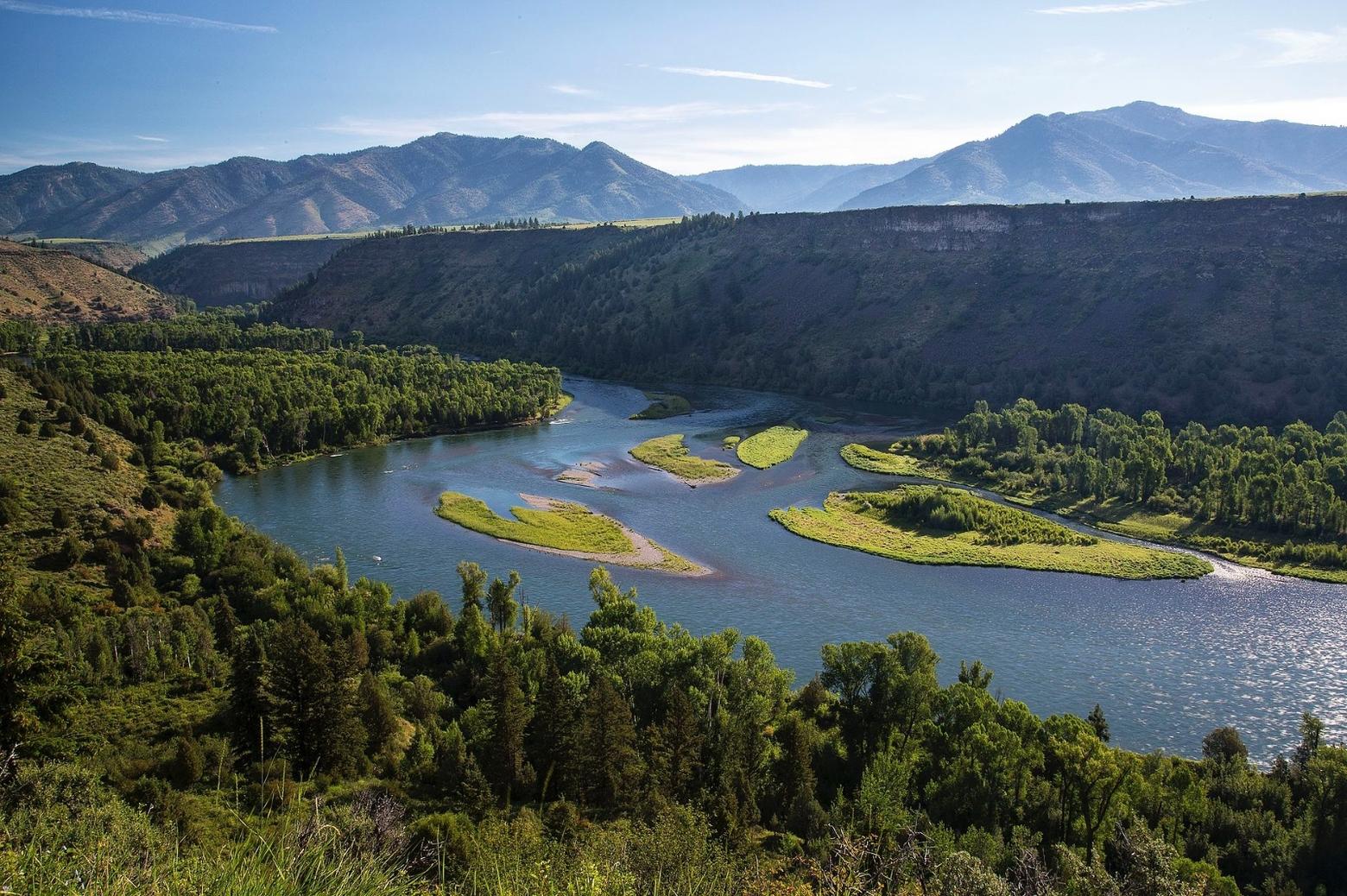 The South Fork of the Snake River in Idaho managed by the BLM. Imagine if, instead of it being protected, this popular stretch was lined by trophy homes and/or turned into a water park. As Newcomb notes, unimpaired places always demonstrate their higher intangible value over time. And once they are gone you can't get them back. Photo courtesy Bureau of Land Management.
Ironically, the more that buyer bought up, the more valuable anything left over becomes, right? Because whatever is left behind is surrounded by that much more space, that much more wildlife, that much more wild, offering that much more opportunity to…you guessed it "Stay Wild". In other words, everyone wants to live here, especially if no one else lives here.

You get my gist. Clearly there is value to open space, to wildlife and to staying wild.

Alas, we keep developing, growing, incrementally reducing open space, diminishing wildlife habitat, suffocating the environment and extinguishing the Wild. Why? How? For what purpose?

Private gain, of course. Notably the economic rights referenced by the late Supreme Court Justice Antonin Scalia are measurable. Notably they are assignable and legally defensible, rooted in principles enshrined in the US Constitution.
That ain’t changing anytime soon. And as public officials we are bound by oath to uphold the law. So long as we continue to develop within the myth that we are preserving and protecting the ecosystem, the remaining private property and the rights associated with the ownership of that property become ever more valuable.

Does that mean that saving our environment from ourselves boils down to money?

We commissioners can regulate, arbitrate, split the baby only so much. I look now, towards you, private citizen. $15 billion. That’s what the State Assessor says. But what’s our community, our ecosystem, worth to you? The land summons us to step up, to be both creative and bold.

EDITOR'S NOTE: The essay above was part of a talk Newcomb delivered in January 2018 to the annual "22 In 21 Symposium" put on by the Charture Institute in Jackson, Wyoming. The "22" stands for the number of Teton County on Wyoming license plates and the 21 represents the century we are currently in.
About Mark Newcomb

Mark Newcomb is an elected commissioner in Teton County, Wyoming.  Father of two sons and son of a well-known mountaineer, Newcomb has worked as a climbing and skiing guide, ski patroller and avalanche course instructor. For several years, he was also part owner of Exum Mountain Guides. Currently, he is an environmental consultant.
Read more

Experts Say The Magna Carta Of American Environmental Law Is Under Siege
Special Report: The National Environmental Policy Act benefits the lives of all Americans every day. So why is the Trump Administration...
Read
Architecture, Bozeman, Co-existence, Columnists, development, Growth—Good, Bad & Ugly