In Divided West, Sara Flitner Guides All Sides Toward The Radical Middle

Former mayor of liberal Jackson, who grew up in a Wyoming ranching family, is devoted to finding common ground

If Jackson Hole is really Wyoming’s anomaly, then the town of Jackson’s recent mayor, Sara Flitner is, in many ways an anomaly within an anomaly. She’s a modern example of the heritage that gave Wyoming distinction in calling itself “the Equality State”—which is actually its official state motto, not “the Cowboy State.”


Nonetheless, Flitner knows her way around a horse and being the product of a Bighorn Basin ranching family, she understands that people get along best by doing things together, working cooperatively, and aiming straight and steady instead of gunning from the hip and lip.
Flitner may have grown up in a conservative part of Wyoming but she became mayor of the state's most progressive small town, Jackson, set beneath the Tetons. Along the way she became a professional conflict resolution specialist.  For her, talk is cheap and actions speak louder than words.
Flitner, who runs her own consulting business and advises a wide range of clients on how to move ideas forward, is a firm believer in that non-partisan realm known as “the radical center” of community engagement devoted to the confluence of values rather than agendas of the fringe.  Look at the photo above and you see Ms. Flitner, then mayor of Jackson, meeting with Colorado Gov. John Hickenlooper, a Democrat, and Wyoming Gov. Matt Mead, a Republican, at the 2016 SHIFT Festival in Jackson Hole.
What Flitner loves to do more than anything else is bring people together around a table for a cup of coffee and most often it results in even perceived foes realizing they aren't so far apart on major issues.
Ask Flitner whom she admires and her answer will reveal how wide ranging she is.  “My friend, Elia, who cleans houses for a living, a single mother of first generation citizens, because she maintains an honest life and manages to stay dignified and generous. She influences me. So do the dominant leaders in neuroscience, because they have a lot to offer in terms of developing better brain fitness, building neural networks that build skills for problem-solving, empathizing, and decreasing stress."


MOUNTAIN JOURNAL:  You are a product of rural America with your family running a ranch near Shell on the eastern tier of the Greater Yellowstone Ecosystem.  Your Dad was a leader in the Wyoming Stockgrowers Association and your clan has been praised for the thoughtfulness it brings to Western issues.  Growing up, what kinds of conversations did you have around the kitchen table related to politics, land stewardship, the environment and that vague notion of an American dream?


SARA FLITNER: People did a lot more doing and showing than talking, when I was growing up.  At dinner time, people were often tired from a full day’s work. Still, my siblings and I loved nothing more than eavesdropping on the political tirades between my father and “Uncle” Frank Hinckley. Peppered with insults about “dewy eyed liberals” vs. the “heartless bastards,” their conversations went back and forth, over a whiskey or two and lots of “god-damns.”  They argued plenty, but I can’t remember a single detail of that.  I can still see Frank’s twinkle, right before he was about to scandalize Dad.  Mostly, I remember riotous laughing. Kinship. That was how the table was set for me. That’s what disagreeing looked like.


MOJO: As mayor of Jackson, Wyoming, you were pragmatic, advancing a mixture of progressive and conservative approaches. How did you arrive at the place where you are, ideologically speaking, and why do you think politics have become so entrenched? 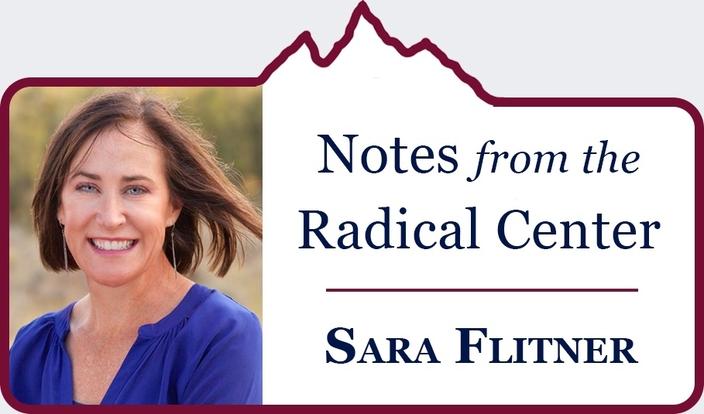 FLITNER: Maybe it stems from being the third kid, a girl, out of four and growing up and working with various assortments of cousins, ranch hands and family friends who had strong opinions and always something to offer. Discounting someone on face value was a mistake. It was, after all, the sheepherder with a single tooth who noticed me playing in a red anthill and plucked me out of it before the dozens of welts turned into hundreds.


Or Vern, the guy who showed up to work every day one winter in nothing more than a jean jacket, a ribbon of white skin exposed to the elements beneath its hem. He frostbit his abdominal skin at least once.  But he could fix things, and he was reliable.


Certainty has its value, especially when there are facts that can be ascertained. Medicines proven to work or mathematical equations to safeguard planes in flight. But in relationships, in politics and businesses and families, certainty mostly falls short of  sustainability.  The entrenchment comes from people being more certain in their own opinions without being curious about what it looks like from across the street. It’s a big mistake, a short-sighted one.


MOJO: Professionally, you are a consultant who specializes in wading into disputes and trying to find a middle ground.  There are those who swear by collaboration and others who argue that on some issues, such as things involving clean air, clean water and protecting wild lands, compromise can lead to their permanent loss or degradation, as has happened in so many other places across the country. How do we prevent that pattern from happening here?

FLITNER: I don’t think people understand these words anymore. Collaboration simply means “working together.” Compromise basically means you accept something when it’s not exactly what you want, like letting your kid take a few bites of green beans instead of forcing him to eat them all, and avoiding another ruined meal. Compromise is a choice you make, based on who’s in the conversation, the power they have, and the respect and care you have between you, or the deficit of that.


MOJO: Can you elaborate?


FLITNER: There is this story that a lot of people in my field use, about two kids fighting over an orange, driving their mother to want to stick her head in a bucket.  Instead, she snatches the orange, slams it on the kitchen counter, slices it in half and hands each kid a half. The wailing gets louder.  Turns out, each kid wanted the orange for different reasons: one needed the juice from one entire orange to make a pound cake. The other needed the entire peel of the orange to make a planet for a science project.   Behind the certainty, the sound-byte, is often where we find the answers.


MOJO: Are we paying attention to the important things?
FLITNER: Poet Marge Piercy says it best: “”The pitcher cries for water, and people for work that is real." The idea that families or schools or local organizations would operate in a silo or without compromising about things like work hours or school uniform colors is silly to most. I believe we are being asked, at this point in our collective development, to listen to the extremes, but to rise to the work of solving the challenges, to recommit ourselves to dialogue, respecting that someone else might see things differently, and doing the work of  the middle, the radical center. Huge challenges enshroud our communities. Disappointing economics, opioid addiction, development pressure.


MOJO: Wyomingans (we refuse to use the less-poetic term Wyomingites!) who grow up east of Yellowstone in and around the Bighorn Basin have a differently mindset than what we see proliferating in Jackson Hole.  What can the rest of Wyoming learn from Jackson and what are the things that Jackson Holeans need to appreciate about the rest of the state?


The conversation we need to have in Wyoming, between Jackson and other parts of the state, is no different than the conversation we need to have everywhere. And it’s less about what we talk about than how we talk about it.  Conversation on a bedrock of  judgment and poor manners feels bad, and a lot of rural people feel that arrogance.  A few years back,  I heard a Stanford professor lecturing on water in the West, and the basic plan was to more efficiently get water from “rural” places  to where the action is. It was insensitive, to say the least, to what Stegner referred to as “the lives in the landscape.”


It’s not a new story. We do better when we understand each other, and the crux of this conversation is we continue to create our pockets and bubbles and segments, and without dialogue that gets us to understanding the other guy, we’re going to see a lot more elections like we saw last go-round.


MOJO: What are your greatest fears about the future and how do you confront them?


FLITNER:  I am afraid we’ll continue to talk more and listen less. I’m afraid we won’t know how to go into the mountains with our attention and our appreciation, that we’ll be more addicted to fake worlds created on social media, fake news propped up with devastating generalizations.  That we’ll continue to invest in the idea of a simple world, where things are black and white, instead of complicated and messy and also full of potential for connection and solutions. I’m afraid we won’t choose decency. I am afraid I will be on a phone call and miss the deal of the century on Wine Till Sold Out. (www.WTSO.com) I deal with my fears by drinking all the deals I get on WTSO. Also, by recognizing every single day that it is a gift to live in the Mountain West.


MOJO: Who are the authors shaping your thinking?


FLITNER: Wendell Berry, David McCullough, Naomi Shyab Nye, Karen Armstrong, all writers who provide context, advocate for decency and stewardship, call to our human capacity for empathy.  There are so many writers who shape my thinking. Pope Francis though my Catholic aunt insists I should return to the church and quit poaching his quotes.

Increase our impact by sharing this story.

GET OUR FREE NEWSLETTER
Never Miss A Big Story!
Tags: Notes from the Radical Center

Steve Primm Wades Into The Sagebrush Sea
Most people dwelling in Greater Yellowstone might live in towns and small cities but rural people and their lands hold the...
Read
Culture

Speaking The Ancient Lexicon Of North America
In two poems for the new year, Lois Red Elk offers MoJo readers the chance to expand their human vocabulary
Read
Back to home