Sharp social commentary that comes accompanied with equal parts intelligence, insight, mirth and self-deprecation, is its own art form, part of a grand tradition not monopolized by any one political party. Aspects of David J Swift’s take would delight hardcore admirers of P.J. O’Rourke, Dave Berry or even Hunter S. Thompson.


Most people know Swift around Jackson Hole for what he does behind the lens, having witnessed the broadest range of social engagements, from cocktail parties and weddings to fundraisers, wakes, art openings, music gigs (Swift himself is a musician) and bizarre scenes that come with living in a touristy region drawing people from around the world.


Many years ago, Swift wrote a widely-read column, PopCult for the then Jackson Hole News. Mountain Journal is delighted that he’s chosen to come out of retirement and write about whatever suits his fancy here with digital ink.


MOUNTAIN JOURNAL:  With camera in hand, you have been a documentarian in Jackson Hole and beyond, across several decades, of people and events along the time-space continuum. Where have we been as a culture in Greater Yellowstone and where are we headed?


DAVID J  SWIFT: In 1976, following a two-week assignment in Jackson, I surveyed the valley with the exquisite wisdom of any 27-year-old and declared it “Little Big Town.” A surfer of Compton, California, I decided to stick it out the next winter to learn to ski. Forty-one years later, “Little Big Town” seems on the mark. We have a high profile internationally, not only for our ability to attract big shots en masse  but for our above-average knack for making the correct decisions in the destiny-control department.


Where are we headed? Wyoming wore its Western Libertarianism well when the Republican party respected its intelligent, insightful members and kept its drunken, cranky lunatics at bay. Now GOP is rather like opioid addiction: a destructive habit that too many Wyomingites don’t have the will to overcome or confront. Even the most enlightened Jackson Hole Republicans haven’t the courage to announce the obvious, that the current President of the United States is a very sick man. This bodes ill.


MOJO: How does Jackson Hole, in your humble opinion, regard the rest of the ecosystem?  And if there is anything intriguing about the north and western provinces which is to say, the great states of Montana and Idaho, particularly the distant frontier known as Bozeman, Livingston and Paradise Valley, what would it be? 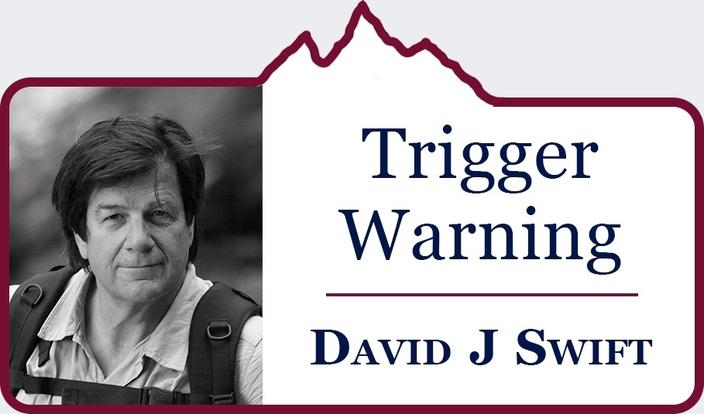 SWIFT: I am loathe to apply a single mindset to a community. Diversity, etc.  But judging from electoral preferences the past two generations, a muscular conservationist ethic is embedded in our culture. As long as I’ve been around, local conservation efforts have been mindful of the Greater Yellowstone Ecosystem as a whole. I think that’s also the case in sleepy, emerging hamlets like Bozeman. Farther afield, we start wading into pockets of the Fox News Hate Cult and the know-nothing politics they enjoy. One certainly can call white nationalist enclaves “intriguing." 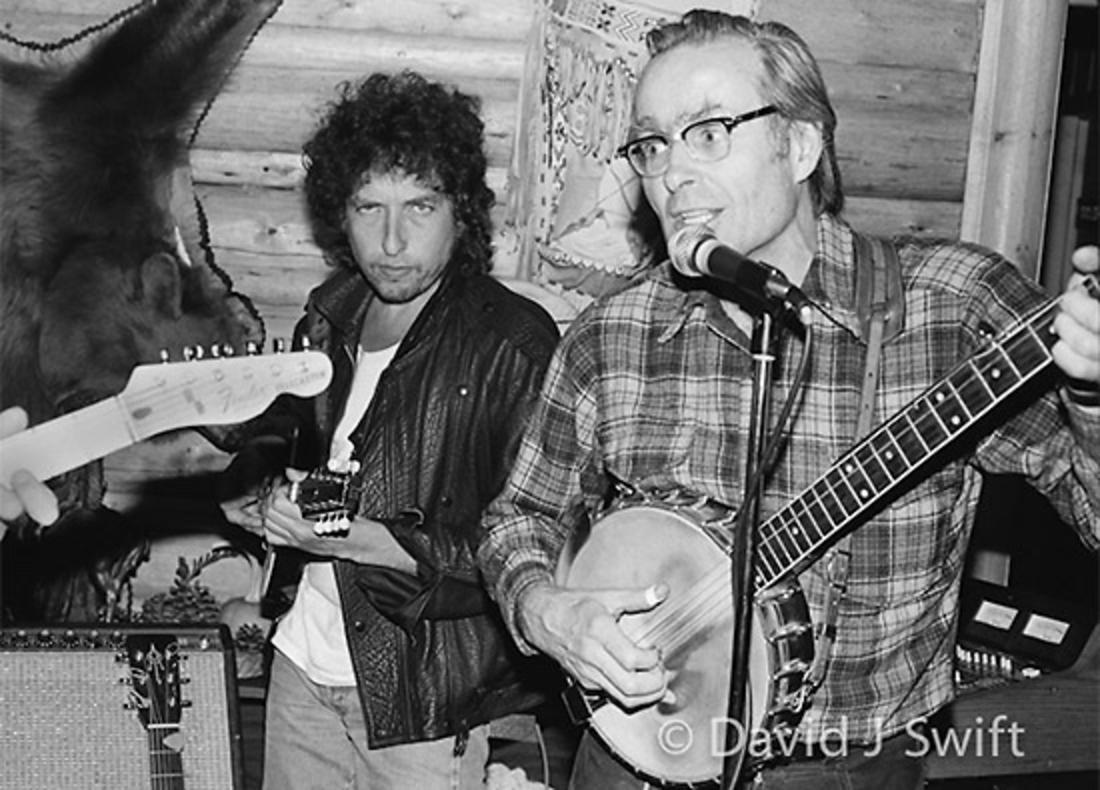 TWO LEGENDS: David J. Swift seems to know everyone in Jackson Hole. Here, years ago, he took a photo of a special guest musician joining Billy Briggs, player in the Stagecoach Band and legendary skier who made the first ski descent of the Grand Teton. Moment was documented for posterity in a gig at Turpin Meadow Ranch.
MOJO: We revere you, going back to your days penning PopCult. It always featured astute observations about society, goings on, music and oddities that captured your interest.  What will you be exploring in your column for Mountain Journal?


SWIFT: That's a lovely way to describe my decades of wisecracks. I am pretty lousy at things like LDRs and exaction fees. (I vigorously support office-seekers who are good at them.) I’ll do what my editor orders: write about popular culture. Two recent developments have my attention. One, the perfection of propaganda to where most people can’t even think straight anymore. Two, the perfection of addictive behaviors: toxic pharma consumption; toxic food consumption and the mind control voluntarily found in our glowing screens. I write this during a two-week road trip when I am consciously avoiding the pleasure of a Facebook “Like” despite the urge every five minutes. It’s a powerful drug.


MOJO: If you were to describe Jackson Hole, what it is about its identity today, where it fits into Wyoming and some of the lessons we might learn from it? What comes first to mind?


SWIFT: A certain selective ignorance first comes to mind. The last two generations of leadership in Jackson Hole (which, by bizarre coincidence, parallels my residence) has been largely a best-and-brightest affair. The rest of Wyoming considers Jackson Hole too snooty, too rich, a collective of self-righteous liberal jerks — while taking for granted our healthy-community traits like pathways and not letting greed win every political battle. They love our pristine lands while mocking the vision and hard work it takes to maintain pristine lands.
MOJO:  For you, the role of journalism is.....?   And how would you rate the performance of local and national journalism today?


SWIFT: National journalism is healthy today except for TV news, which as Jon Lovett pointed out “speaks a dead language.” The biggest threat to journalism is the consumer. “Media bias” cannot exist any more than “water bias” can exist. It’s a nonsensical concept and therefore very useful to propagandists. When a consumer whines about "media bias” he is merely admitting “I never learned how to read comprehensively and think through tough topics.”


The quality of local journalism varies, of course, depending on who’s paying for the ink, and why. Small town papers will always be beholden to the richest advertisers in town.


MOJO: Name three eccentric things about yourself that will steadily be revealed in your column and oh, by the way, it is truly great to have you on board.


1. My humor is probably too dry despite last winter’s record snowfall.


2. Far be it for me to dis a person for wanting a well-earned buzz — I like mine — but alcohol preys on the stupid. On social media, it’s shocking how many people treat getting wasted as a proud accomplishment. Mormons did not ban alcohol because they were prudes. Mormons banned alcohol because they were experienced. The libertarian West embraces the principle of adult self-medication, de jure if not de facto. As resort-town economics bring more stress to the proles, booze will finish off more lives.


3. I shared this question with a couple of friends. Both sweetly offered that I tend to judge people and events with a generosity of spirit, and that I find humor in most things. I like to think this is true. On the other hand, I am convinced we, the human species, are hosed.
Increase our impact by sharing this story.

GET OUR FREE NEWSLETTER
Never Miss A Big Story!
Tags: Trigger Warning

On Motherhood, Nativism And Immigration
Lois Red Elk offers two poems reminding that dreams of better lives are planted in the young
Read
Back to home