For winterkeeper Steven Fuller, Yellowstone's drama is written in the snow 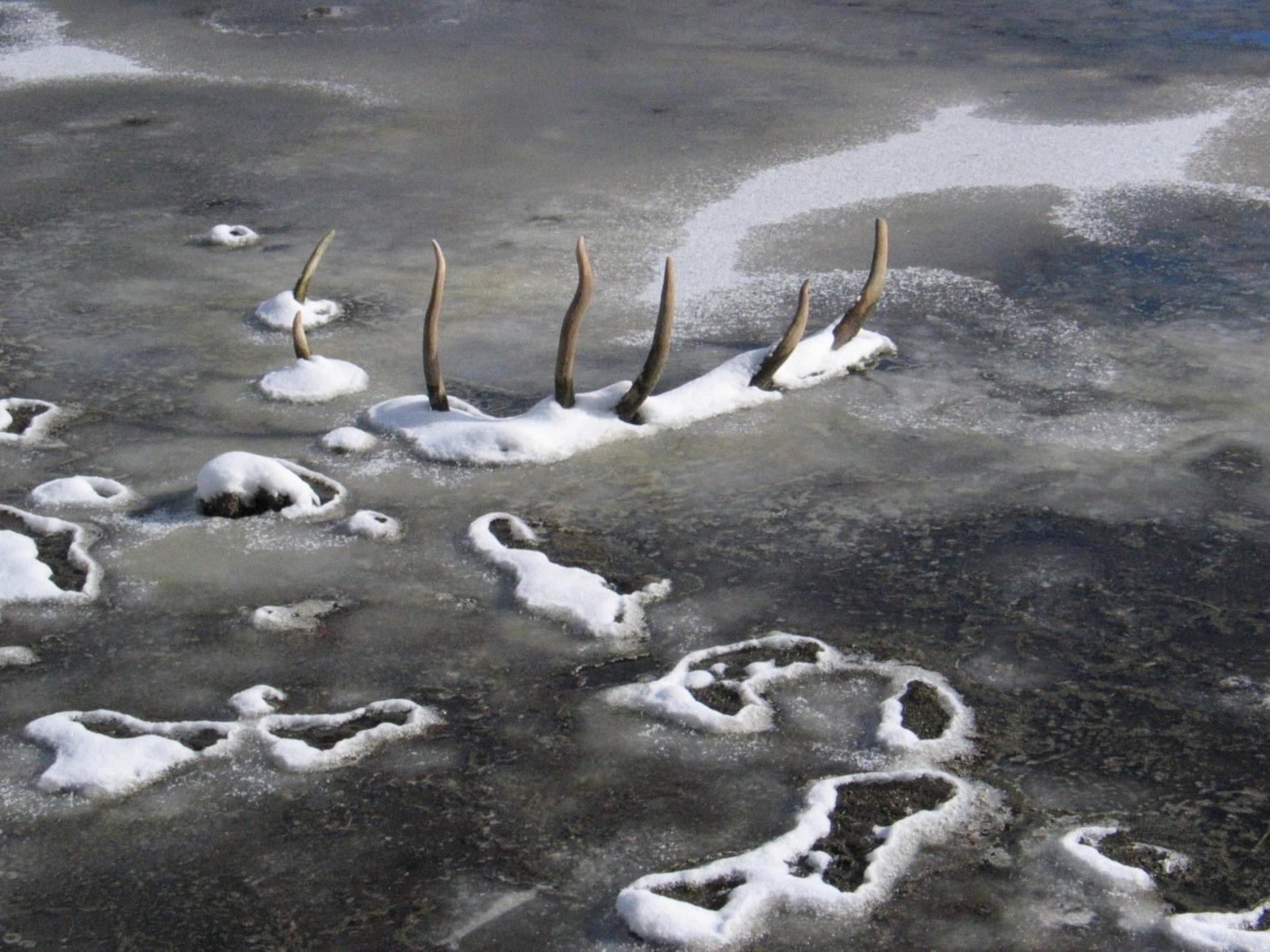 "The antlers of a bull elk who died at the edge of a pond years ago," Steven Fuller writes. "In the beginning the rack stood high and dry above the boggy surface, the antlers' boney bases and the top of the skull clearly visible, but over the years I have watched it settle ever deeper. I wonder if the antlers will completely disappear before I do?" Photo by Steven Fuller
In English the word “sign” refers to animal tracks, or to other evidence of an animal’s passage or presence.
Having spent several years in the wilder parts of Southwest Africa, (my Yellowstone doppelganger, my “mirrored self”), the Afrikaans word “spoor” evokes a wider spectrum of meanings.
Spoor is an artifact, a trace, a hint, or evidence that tells a story, usually of animals, birds, or insects … day beds, rubbings, horn or claw marks, tracks, scat, an odor, a sound, a feather, strands of hair, bent grass, a dust wallow, or a displaced pebble on an animal trail. Each is an example of spoor.
Early one spring before sunrise while walking a frozen stony “game” trail on which there was no discernable spoor I noticed a single small pebble knocked loose from the frozen matrix of the trail. Nothing else. 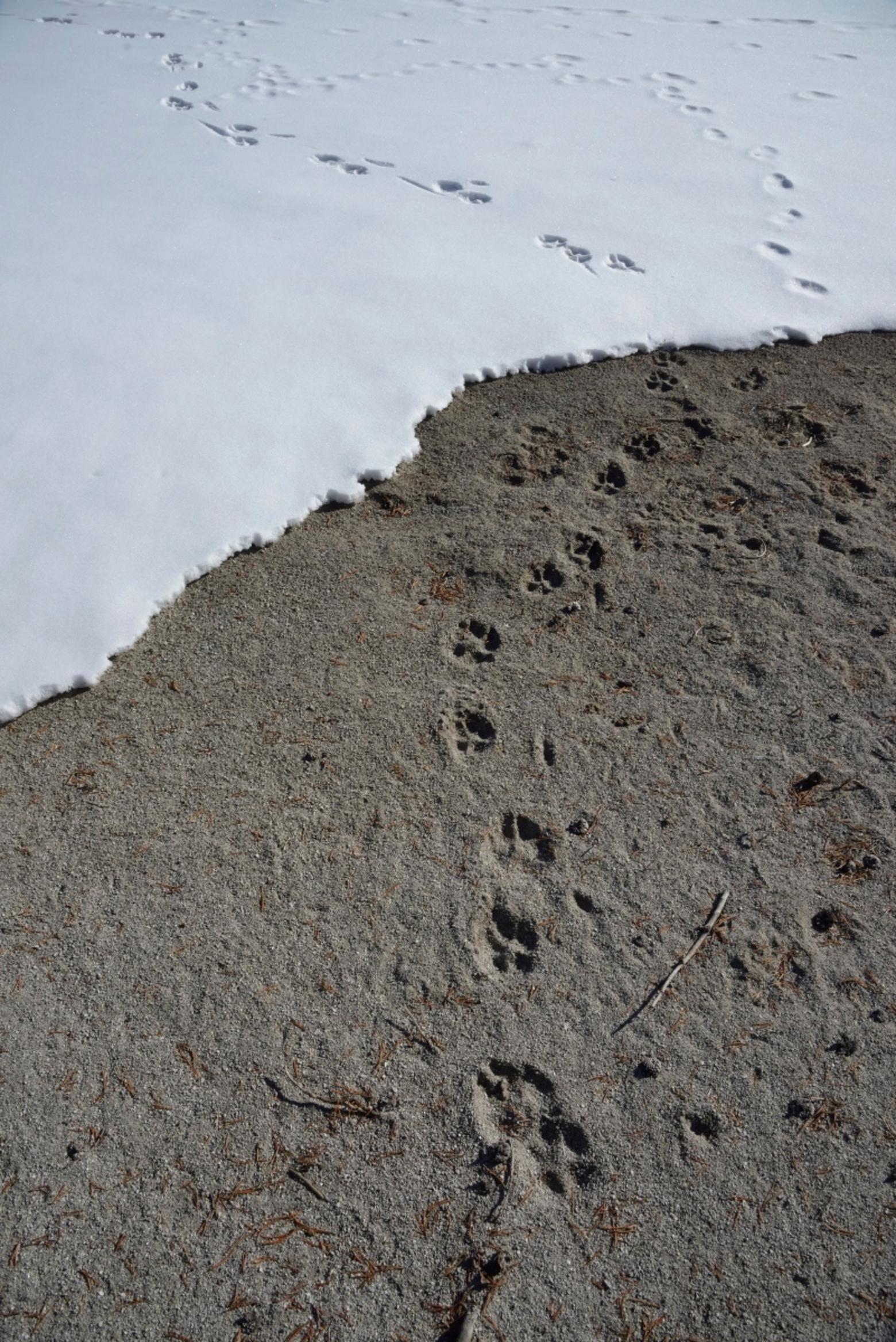 Coyote tracks cross geo-thermally warmed ground onto snow covered ground…the difference is delineated by a sharp line between the hot and the not. Photo by Steven Fuller
Something ambulatory had recently proceeded me and the knowledge heightened my alertness. I wondered about that pebble, until a mile or so later, where the trail crossed some impressionable hydrothermally- warmed earth, I saw the fresh faint spoor of a bear.
In the absence of any other sign I thought it likely the bear was the prime mover of the dislodged stone.
For at least a hundred thousand years our hunter and gatherer ancestors everywhere in the world, both men and women, were sophisticated readers of any trace of disturbance, any useful bit of information, in their environment. Their livelihood and survival depended upon it. They enjoyed the accumulated wisdom of countless previous generations and there was no separation between themselves and the natural world of which they were integral. 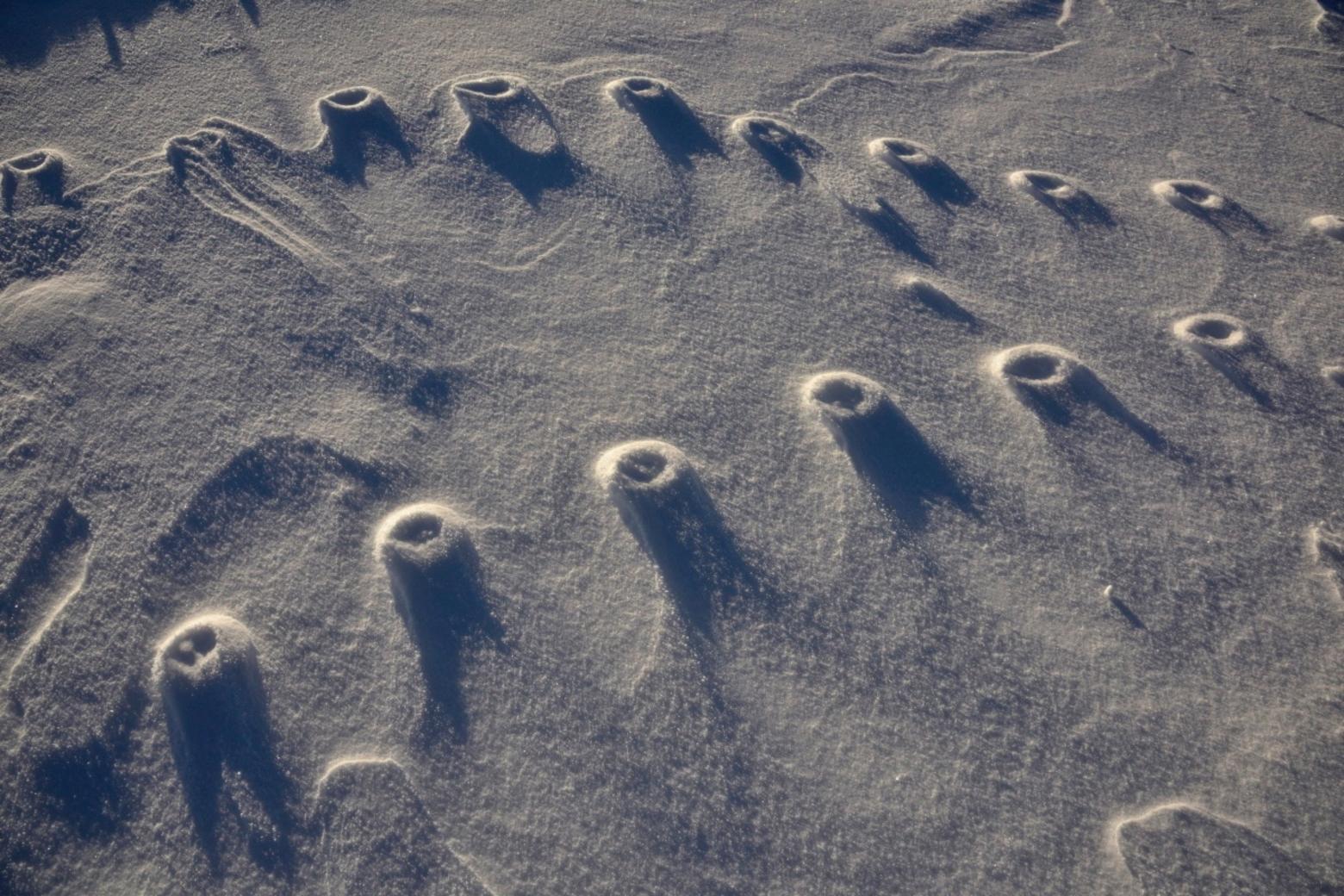 "Wind eroded fox tracks," Fuller observes. "Where the fox has stepped the snow has been compacted and made more dense and thus more resistant to the wind that erodes and strips away the surrounding matrix of airier looser snow—doughnut tracks." Photo by Steven Fuller
The ancient art of reading spoor is nearly extinct.  The corpus of knowledge, the experiential and intuitive ability to interpret spoor by the surviving, mostly elderly practitioners, the last of their kind, is astonishing to us urbanized aliens.


Until we began to coalesce into agricultural cities 10,000 years ago our ancestors for a hundred times longer lived immersed in nature.  Our modern ignorance of who we were for 99 percent of our existence, and just under the skin still are, is at the root of our malice.  This disconnect is the genesis of the deep discontents with ourselves and the civilization into which we have shoe-horned our spirits.
My ability to read or even to be aware of the presence of spoor is infantile compared to that of our forebears.  But, I enjoy noticing the obvious and speculating about the frequent riddles I find in my rambles.
The distant alarm call of a squirrel or of chickadees is not to be ignored.  A flock of ravens may indicate a carcass and perhaps a day-bedded bear. Or a nearby pack of wolves. 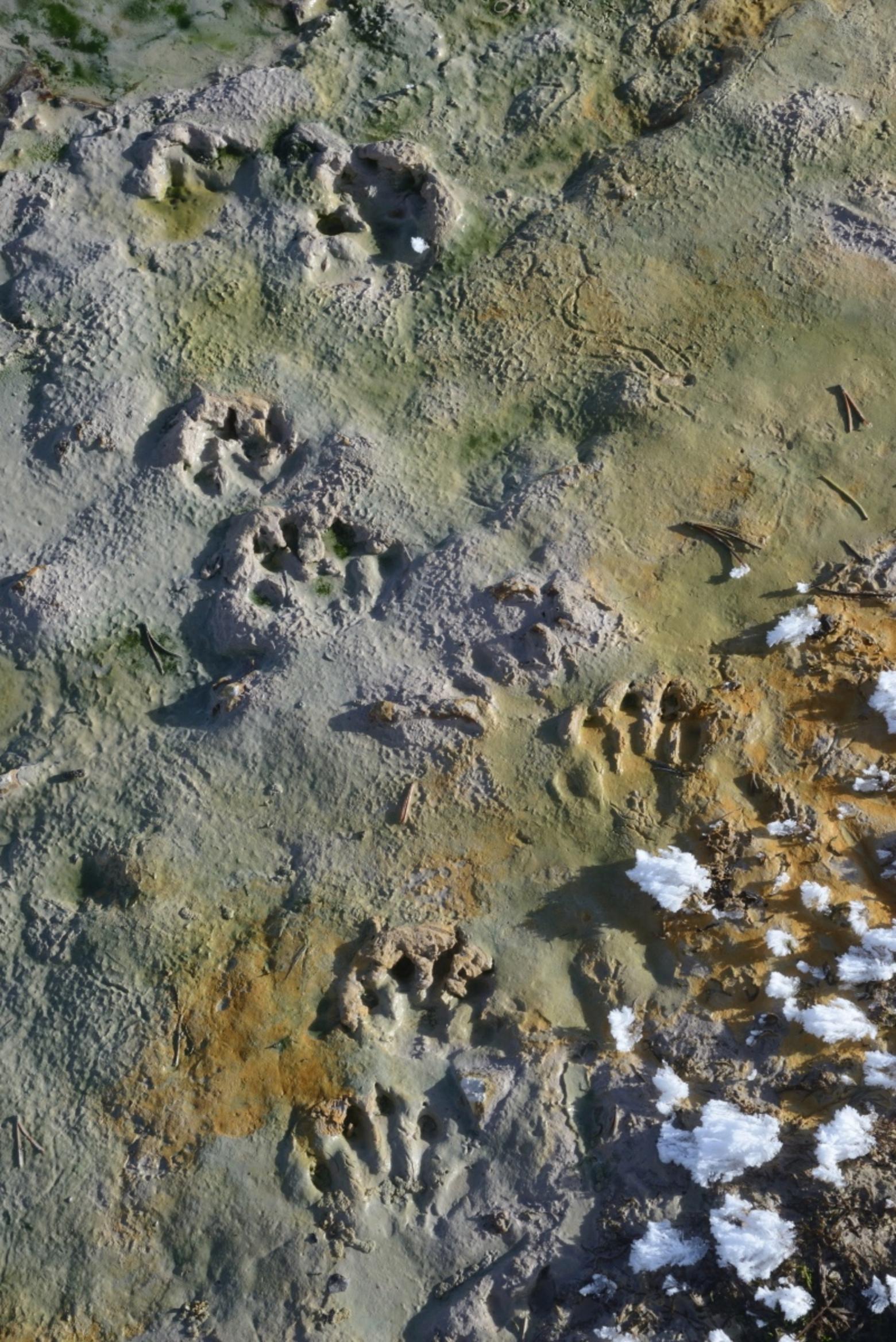 Otter tracks in hydrothermally heated mud next to "frost flowers" at the edge of the Yellowstone River. "The tracks are at the end of an otter slide down a snow slope that leads up to where an otter has eaten several fish leaving only shards of skin, the coarser bones, and a nearby midden of urine and scat," Fuller says.
Where grasses have inscribed crescent arcs in the snow testifies to the wind that woke me last night. The varied properties of buff pies generally reveal the approximate age of the animal that made it, their sex, the season in which the pie was made, and how recently it was plopped.
And there are pseudo-morphs, those shapes, forms, structures that suggest a track or sign but prove on close examination to be the artifact of wind or frost or some other inorganic agency. This is the reason that a single ambiguous track doesn’t count, always there must be two or more as proof of the read.
Whenever we cut the scent trail of a bear my horse companion of 20 years, Ishiwah, would pause, lower his head to the ground and take-in a deep draught of the odor. He was not alarmed by the spoor, he never showed fear of grizzlies in any of our encounters, but his body language made it clear to me that a bear had recently passed this way. His nose enabled me to be aware of visually invisible spoor. 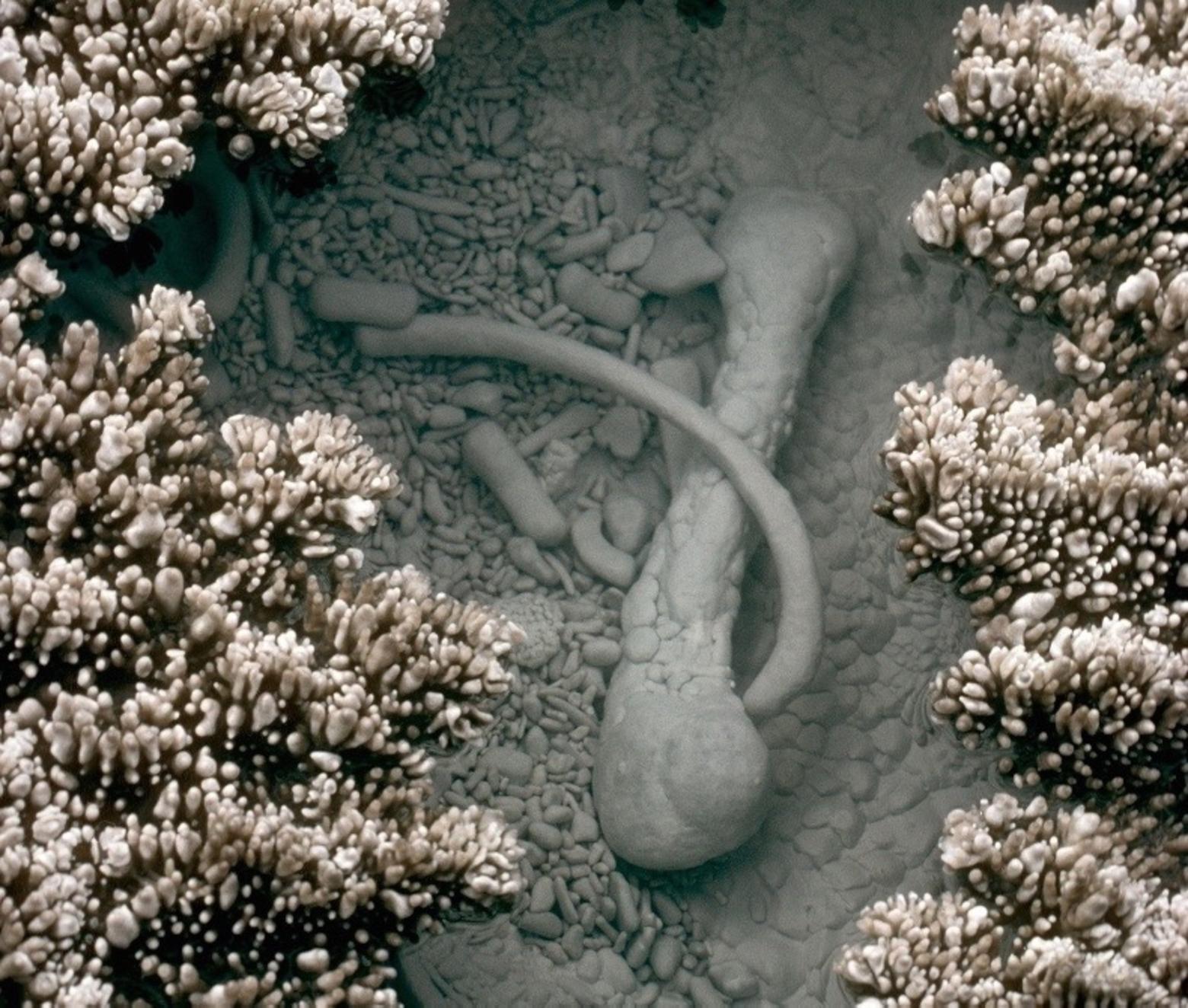 The bones of a coyote that died of injury or age while seeking succor on the warmth of a geyser cone lie in a pool of supersaturated mineral water that is refreshed with each eruption of the geyser, Fuller explains. "The bones provided armatures on which, in the course of years, siliceous sinter was deposited to form an ever thicker encrustation. Mineral deposits eventually closed over the watery window where the bones lay." Photo by Steven Fuller
Spoor offers endless curiosities: The icy cast of the concave bottom of a buffalo’s hoof, for instance, made when the bull stepped in wet snow. Then the cast was caste from the mold of his hoof creating an artifact that looks like the cotyledon of a seed, once one was so handsome I brought it home and put it in the freezer.


Or the perfect bloody impression in a snow drift where a wolf thrust its’ face so as to cleanse it of the accumulated gore come of feeding on a winterkilled bison.


Or, in late winter, a buffalo pie caps a pedestal of snow so as to resemble an odd mushroom. Reading the spoor I figure the weight of the pie has compacted the snow making it more resistant to melting than the surrounding snow in the heat of the day, thus is created a short-lived buffalo pie hoodoo.
It might also take the form of a mushroom nibbled by a squirrel, and cached on a limb at my horseman’s eye level, or one on the ground partially eaten by a deer. The feather of a swan, and then more feathers, blood on the snow and drag marks lead to where a coyote had taken the bird into some timber to eat. The belly trough down a snow slope to the river leads up to where an otter has eaten several fish leaving only shards of skin and the coarser bones and nearby a midden of urine and scat.

"My ski spoor is calligraphy writ on the body of the snow world. I contour in what I like to think of as compatible curves that reflect and respect the flow of the landscape. No straight lines, no herring-bone vertical climbs, no zig-sag cut backs while ascending a slope. I try to practice skier’s calligraphy and avoid skier’s graffiti."

Early one spring, my friend, Joe, and I squatted on a game trail debating whether the grizz tracks vivid in the mud were made last night or this morning when another friend, Amy, came crab walking back down the trail where she had gone ahead silently mouthing “grizz!” and gesturing over her shoulder to where a sow and two yearlings were audibly breaking the bones of a winter-killed bison.


Having been here for a long while I am aware of my own spoor both on foot and on skis. I am a peasant skier, not into performance in any sense of the word.  In Hayden Valley I like to ballroom dance with the topography as my partner—she leads, I follow.
I contour in what I like to think of as compatible curves that reflect and respect the flow of the landscape. No straight lines, no herring-bone vertical climbs, no zig-sag cut backs while ascending a slope. I try to practice skier’s calligraphy and avoid skier’s graffiti. My ski spoor is calligraphy writ on the body of the snow world. 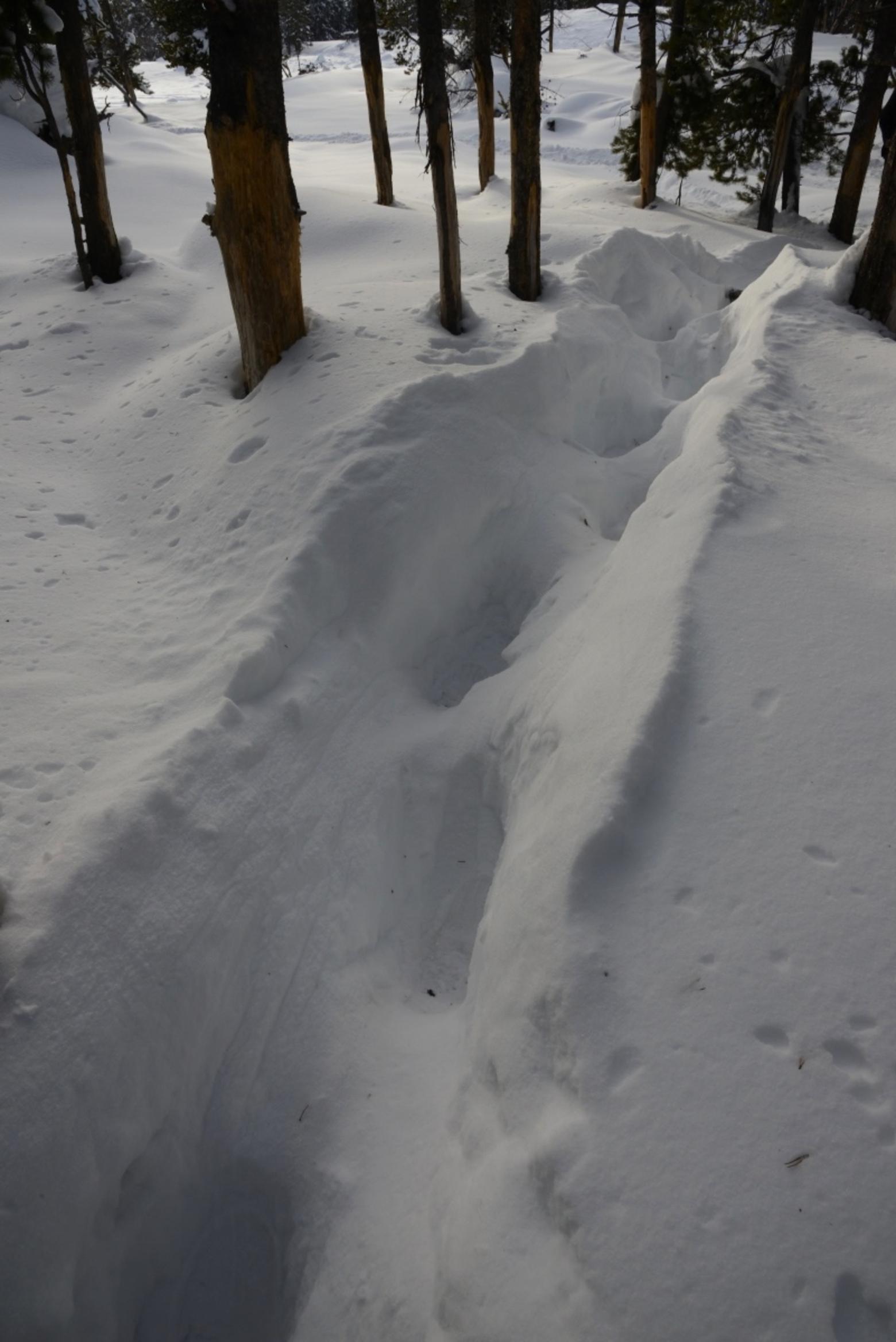 Go your own way: "A deep trench made by a line of bison, a herd of mostly cows and their recent offspring," Fuller says. "The group probably included some young spike bulls, but certainly no mature or breeding bulls. Each animal steps into the tracks of the one before. The girth of the shaggy barrel of the largest animals sculpts and smooths the sides of the trench and that of the younger animals does the same for the lower portion of the trench." Photo by Steven Fuller
I intend no pretentions, but I would like to paraphrase a description of Japanese calligraphy as it applies to ski tracks. The skier has but one chance to create with the brush (skis). The track cannot be corrected, and even a lack of confidence shows up in the work which is best practiced in a state of “no mind”, no self-consciousness, no intent.  The skier must be fluid in execution, the track is a statement about the skier in a moment of time. Clear your mind and let the ski ink flow, no need to look back, enjoy the flow of your previous poem on your return home.
Sometimes I cut the spoor of a couple of skiers, I see where they stopped to pee, then the tracks reveal where one was talking over the shoulder about wife, husband or boss. Here is where they stopped to smoke a joint. They leave a spoor of inattention that scars the perfection of the snowscape.
We all make tracks and scat and so we all leave spoor in our travel through life. But, all to varying degrees are ephemeral, even those writ in stone. No more permanent than our shadow, all sign of our winter passage melts with the snow and blows away in the wind.

Editor's Note: Click here to read all of Steven Fuller's journal entries for "A Life In Wonderland" and this Mountain Journal profile of Fuller, "Twilight of the Winterkeepers"

Amid Partisan Jousting And Talk Of Government Shutdown, Why National Parks Matter
One teenager's desperate pilgrimage to see Old Faithful erupt is reminder of why we need grown adults making decisions in Congress...
Read
Yellowstone