Back to Stories
Big Art of Nature, Water 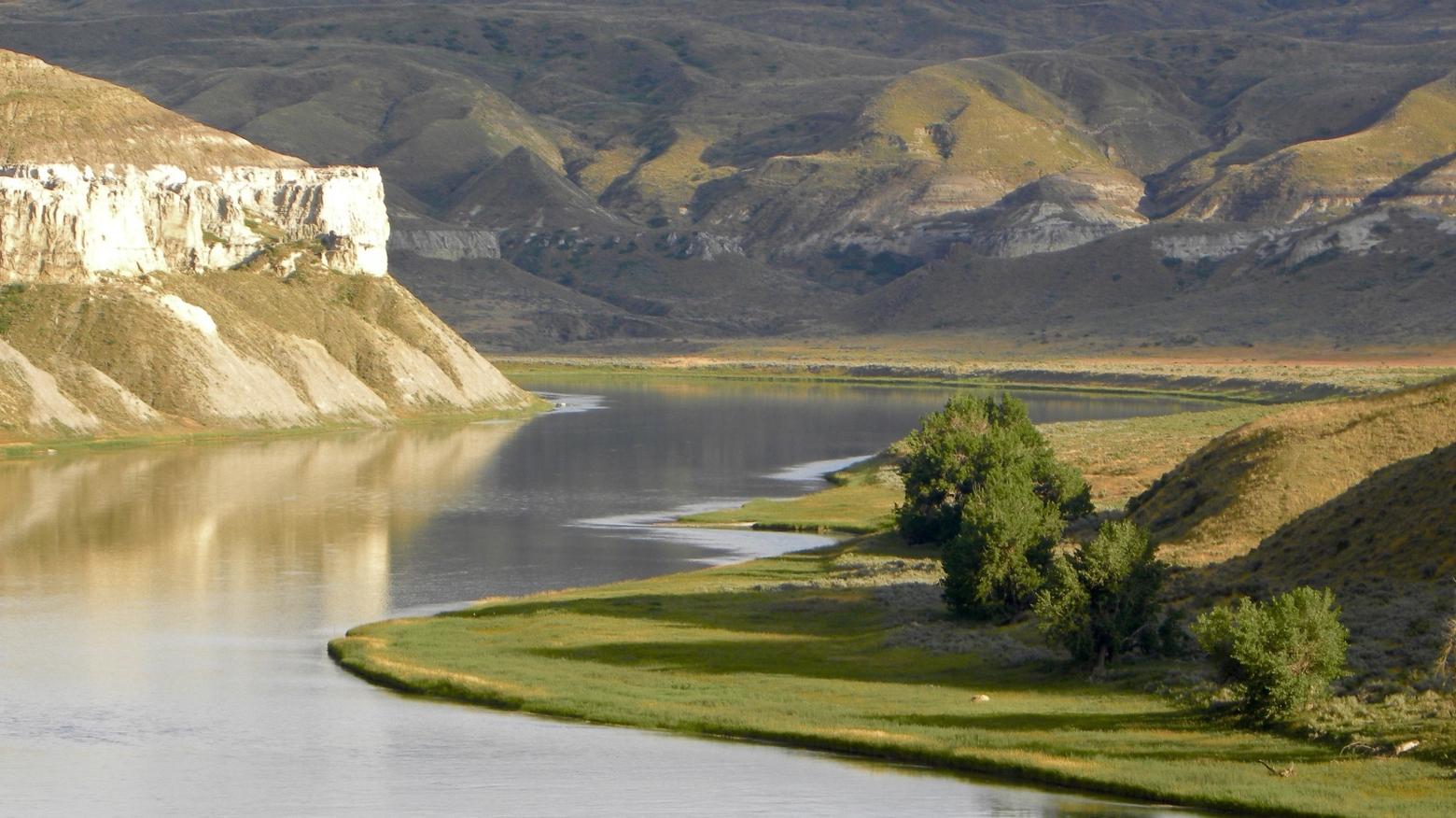 For the Dakota and Lakota, the river that begins at Three Forks and eventually marries the Mississippi is known as Mni Sose. "Mini Sose translates to mean turbid water," says Mountain Journal's poet in residence Lois Red Elk who this week is freshly back from delivering readings at the High Plains Book Festival in Billings.
For others, who have paddled the Missouri River through the national monument section known as the White Cliffs (given the name by Lewis & Clark) and who enjoy exploring stretches further downstream in the Missouri Breaks and the badlands heading toward Fort Peck where Red Elk resides and is a teacher, the Mighty Mo is also known as the Big Muddy.
Think of it: the catchment area of the Missouri River—the full extent of the basin's water drainage—covers one-sixth of the land mass of the U.S.
In this time of seasonal change occurring in the weather and on the land, Red Elk offers two poems for reflection.  The first is a work titled "Fish Butte" from her collection Dragonfly Weather published by Lost Horse Press in 2013.  The second is "Camp of Prophecy" based upon the actual prophecy pertaining to the Missouri that flows through the Standing Rock Reservation. Only a year ago, amid the tense presidential election season, Standing Rock became a cultural flashpoint for reflecting on American values, racism, the legal standing of treaties and the eternal wisdom of caring for nature as an essential part of spiritual reverence, humility and survival.
Standing Rock and the battle over the pipeline was not, is not, a spectator event for the Dakota/Lakota. Nor is it just about moving oil through a tube. For those from afar or even in Minot who would argue it is an issue about not-in-my-backyard, the question is would they want it passing through theirs? And how would they make sense of 150 years of broken promises, verbal and legal that have been made?
As always, Lois Red Elk, a magical realist, speaks insight in her narrative poetry, with words and symbols that, like the Missouri itself, transcends culture.
Enjoy. —TW
Fish Butte by Lois Red Elk


It happens every time I look deep into the dark
turbid water of Mni Sose.  View is the sure
control and determined flow of life with one
direction.  There is no pity or pause for those
who disrespect or foolishly slip into its pathway.
The enormous energy forced by age-old memory,
pulled by gravity and call of mother’s ancient
ocean songs is the urgent motion of its life to
churn with sand and cleanse earth.  The power
brings forth female legends of foreboding and
promise to remind and solve.   I listen and learn,
then recall and recite the rewards of lessons hard
learned.  A message was carried to us from those
ancestors who met the giant sturgeon in the time
before they knew legs, when we swam with the
salamanders and lizards.  I give my water spirit
to the river and learn the language of water.  Easier
now to translate fear into the kindness of swimming.
Easier now to change words into the power of gills.
Easier now to disassemble wanton thoughts for the
ancient spirit within.  It was how the two-legged
treated the poor and the different, that began the
cleansing cycle.  Those who were slow, lame or
old, those who could not help themselves were
ousted and left to fend, to scratch the earth, and
suffer freezing snow, baking sun, and harsh winds.
Tears from all ages flowed from the mistreatment
of these pitiful.  Tears so fluid, so sad they entered
the river and created eddies of despair amidst the
listening flow of water apparitions.  A young man
visiting his brother by the river cried at the condition
of his village when suddenly the river begin to rise
and shudder.  It threw waves as high as the nests in
cottonwood.  The men were frightened and prayed.
The giant water monster, who was listening to their
sad story, asked the men to be calm and listen to his
message.  I know your sad heart and I have a plan.
When all the people are asleep, tell all your friends,
the week, old and poor, to gather at one end of the
village then come to the river edge and call for me.
During the night one of the old ones heard strange
sounds and became alarmed and wanted to run away.
This alerted all the people that the river spirits had
awakened the giant sturgeon.  Everyone started to
holler and scatter.  Still hoping that the plan could
work the young man ran to the river edge and called
for help.  Suddenly the water began to churn and
splash.  Waves grew higher and higher.  A great roar
was heard as the giant flew up on the bank. Astonished
at the size, the young men were thrown back.  They
watched as the fish waddled back and forth across
the land raising dust and creating a deep furrow across
the land.  Finally it reached the village and laid down
in a half circle like a quarter moon then rolled and
rolled till all the mean and greedy people were killed.
Just as his tail and head were about to meet the young
man led all the poor people out of the circle to escape.
All the belongings and storage bins of food were saved
and given to the needy.  All night the giant fish crawled
across the prairie.  In the morning the people followed
the trail and found the fish had dried up into the shape
of a butte.  This butte still stands on the prairie as a
reminder to all greedy and cruel people. 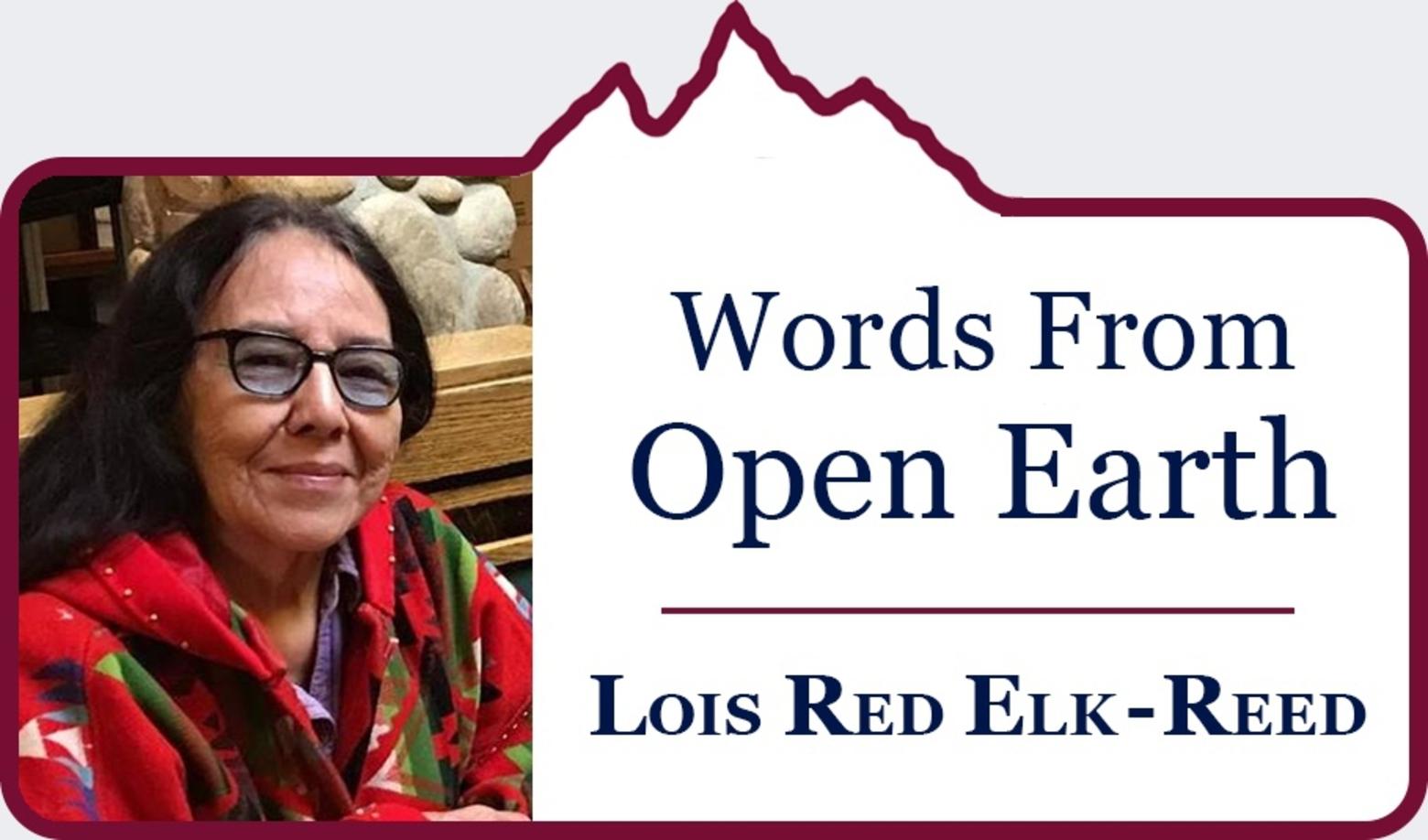 
The camp by the Sacred Stones River leans into
water by listening to a dream shared by a child
running in thick, sticky water that drips off feet
leaving dark footprints in the grass and up the
path into their learning.  An ancient growl comes
from the black dog that licks the toes of the child,
his mouth discarding scales and forecasting death
from ingesting and breathing the spoiled flowing.
He lowers his jaws into the river and watches the
river begin to swirl.  Under the surface, a slow
movement takes shape, elongates, sends ripples
to the other side of the bank reveling a large dark
snake crawling into denied after-thoughts, too
evil to believe.  When grandma hears the dream
an old story comes to mind, like the aftermath
of flooded land when coffins floated down the
river, when grief stole the breath of elders and
stopped hearts.  She recalled stories of fear, of
something slithering through once sacred water.
We all have memories of times before.  We keep
them for our mindful walk, then time unhinges
whisperings of ghosts.  That’s when setting sun
calls us back to our intuition.  During translation,
ancestors nudge our hearts toward survival.  Our
children are sacred, still anchored to the Wakan
and can see things from the spirit side.  They
encourage necessary dialogue of the prophesy,
of sharing sage and tobacco smoke.  Those
footprints are warning of something coming - to
ready against dark waves oozing from a dream.

The Future Of The Local Small Town Ski Hill
Sue Cedarholm paints a picture that speaks to both nostalgia and concern about Snow King
Read
Big Art of Nature, Culture

A Good Life Writing After Years In The Forest Service
Mountain Journal columnist Susan Marsh spent three decades working for the US Forest Service, working on recreation and wilderness protection in...
Read
Back to home