Shoveling Out: The Art And Danger Of Being A Yellowstone Snowsmith

In the isolation of America's first national park, Steve Fuller and other winterkeepers carry on their age-old task of preventing roofs from collapsing 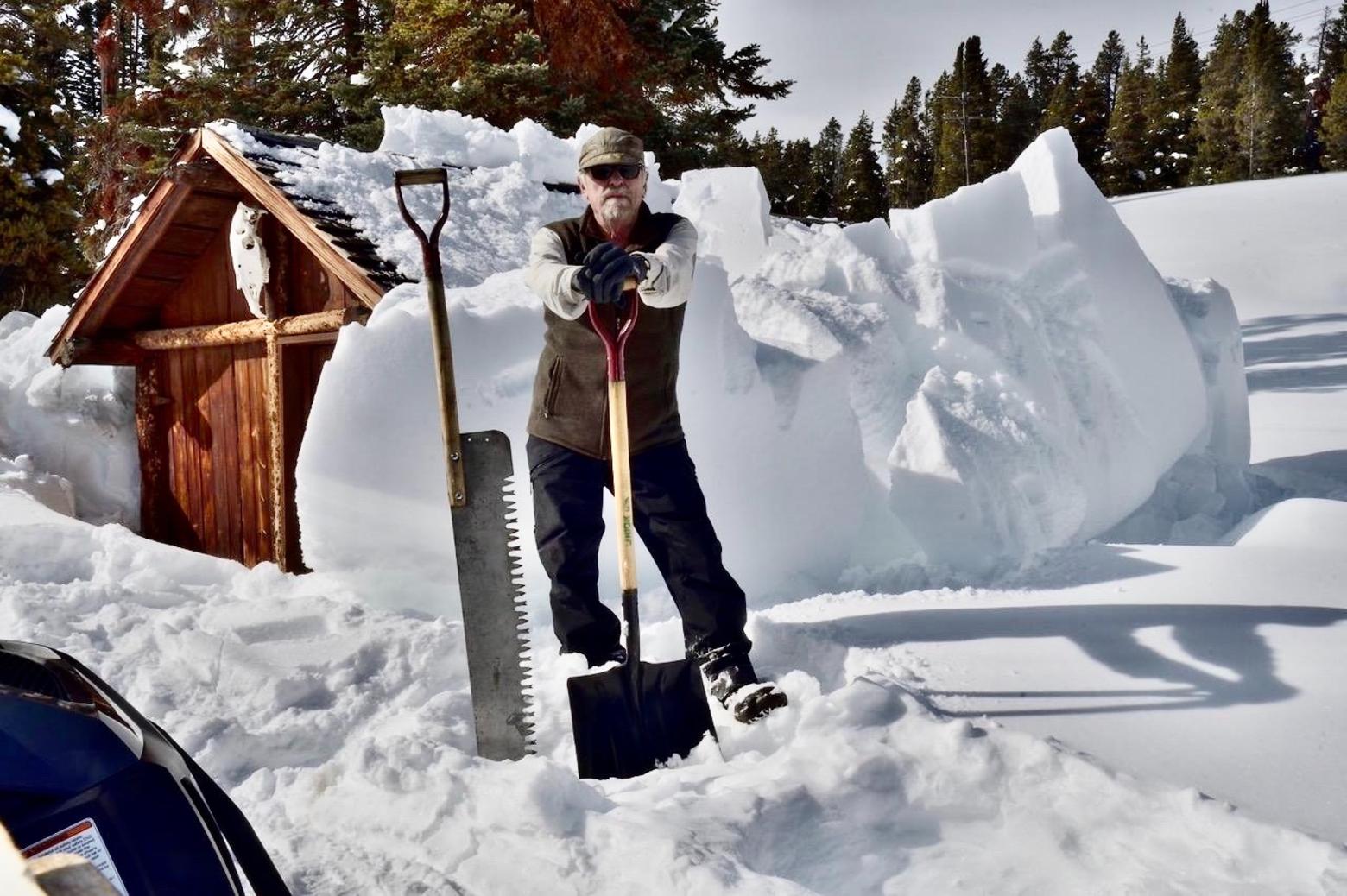 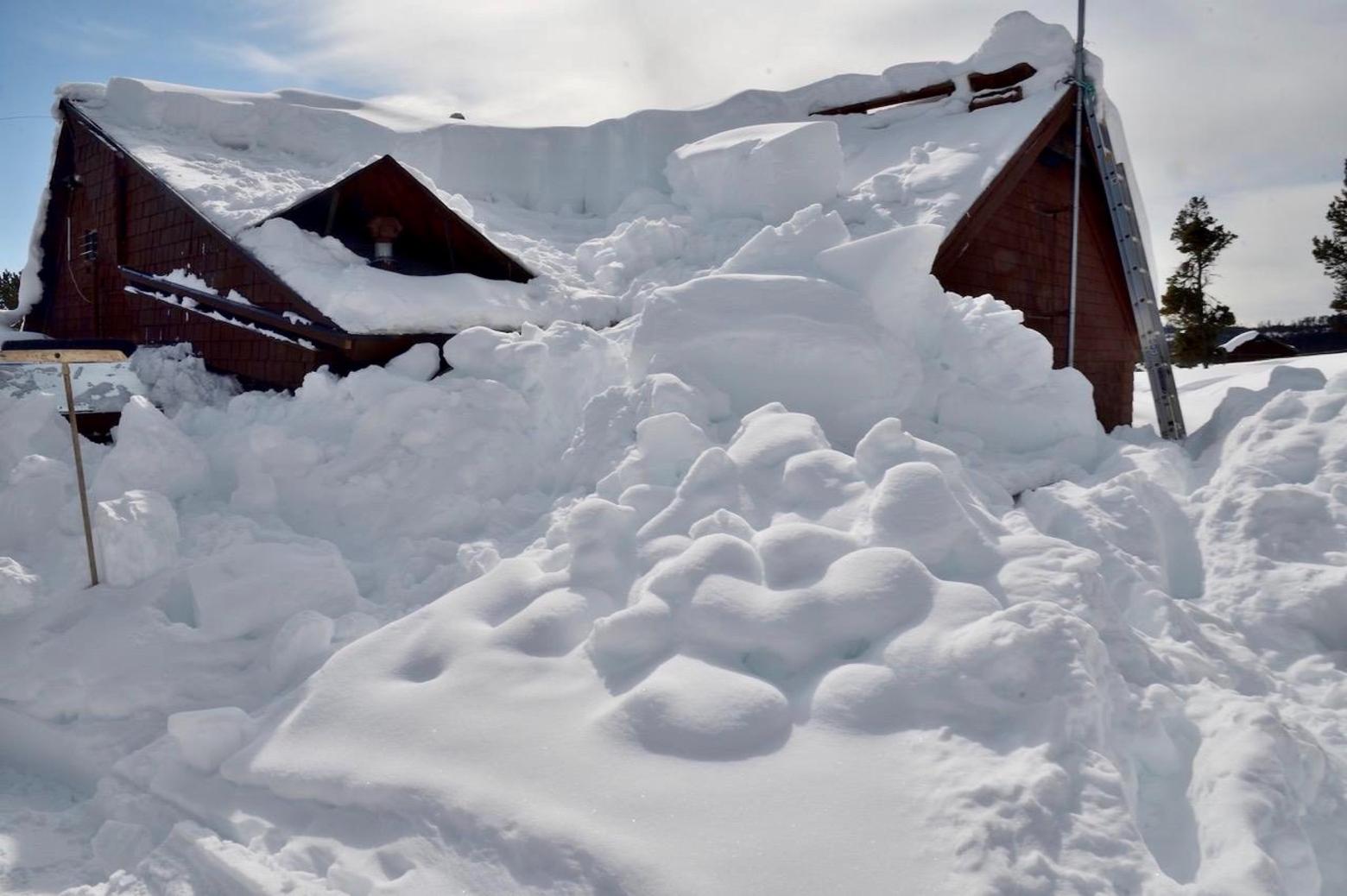 Steve Fuller, above, readies for the final heroic excavation. In order for sunlight to shine again indoors, the Yellowstone winterkeeper at Canyon faces an annual epic undertaking to clear snow that has entombed his cabin and other structures in the center of America's oldest national park. Photo courtesy Steve Fuller
EDITOR'S NOTE:  You can follow the ongoing dispatches from Yellowstone winterkeeper Steven Fuller. Read his last installment and the Mountain Journal profile about his nearly half century in America's oldest national park here.
By Steven Fuller
Vernal Equinox is now upon us in the Northern Hemisphere and it's still snowing high on the Yellowstone Plateau regardless of whether the outside world is here to witness it. The load of winter accumulation weighs heavy on the rooftops of human structures, some dating back more than 100 years. My task as a Yellowstone winterkeeper goes on. Contemporaries who hold the same title I do at other locations, such as Old Faithful, are few in number.
We work together on our snow removal tasks, much like avalanche control professionals do for safety at ski areas and parts of the backcountry. Our slopes, however, are different and we don't use explosive charges to cause a controlled slide. Last week, fellow winterkeepers and I completed some major work on the roof at Canyon Village's main lodge.
Several times each winter we use a slender stainless steel wire to under-cut and release the accumulated mass of snow on this roof which is too steep to clear in the traditional fashion, working on the roof, using a snow saw and shovel to cut the snow into blocks and skid them off the roof.
This roof requires a multi-person effort and those from Old Faithful came up for the day to make it happen. First we go up on top of the roof ridge and with a snow saw cut a kerf in which we can lay a wire cable the length of the upper base of the cornice. 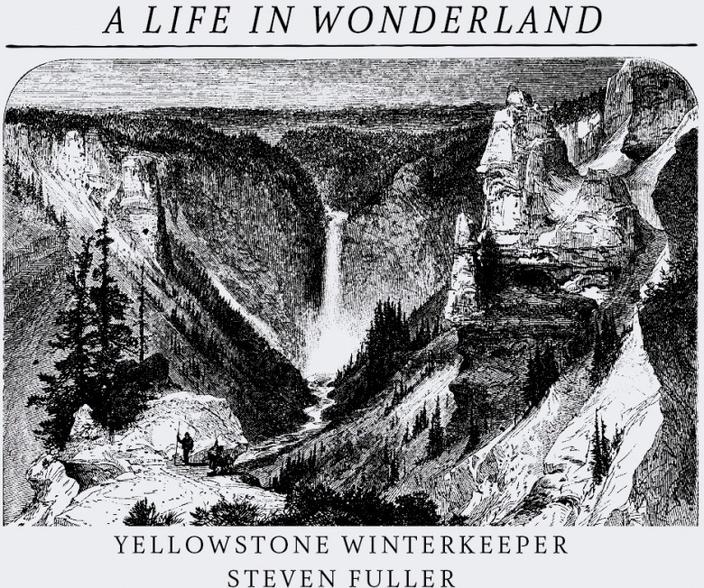 Then we drop one end of the cable to ground off the right end of the roof and the other end of the cable to ground on the left side of the roof forming a loop. The right end of the cable loop is firmly anchored to the ground, then we pull the left end of the loop to under-cut the cornice where it lies on the roof until the snow mass releases and avalanches. Slabs of compacted snow turned to ice can weigh several tons apiece. Getting caught in the controlled slide can mean a crushing death.
Sometimes the whole load goes at one pull, but this time we had to do three pulls to get all the load off the roof, So far, this winter has been “average normal” snow accumulation and wind, so we may need to do only one more wire pull. But, there are still a couple of months of winter up here on the Yellowstone plateau and one never knows.
Several years ago we had an extremely heavy wet snow April and some buildings were damaged with the unusual snow loading and one historical building at Fishing Bridge collapsed. Traditionally by April all Yellowstone winterkeepers were laid-off and confidently complacently enjoying spring in the Utah desert.
Times are changing and even that ritual may be scuttled.  This year, as Corvid-19 descends on our region, no one knows what the coming months might bring. At my winterkeeper's cottage (see photo above), I am still digging out, in no rush to re-enter the normally-frenetic outside world—the one I've been told has abruptly gone quieter.

Look Out Below! Triggering A Slide Off The Roof At Canyon Village 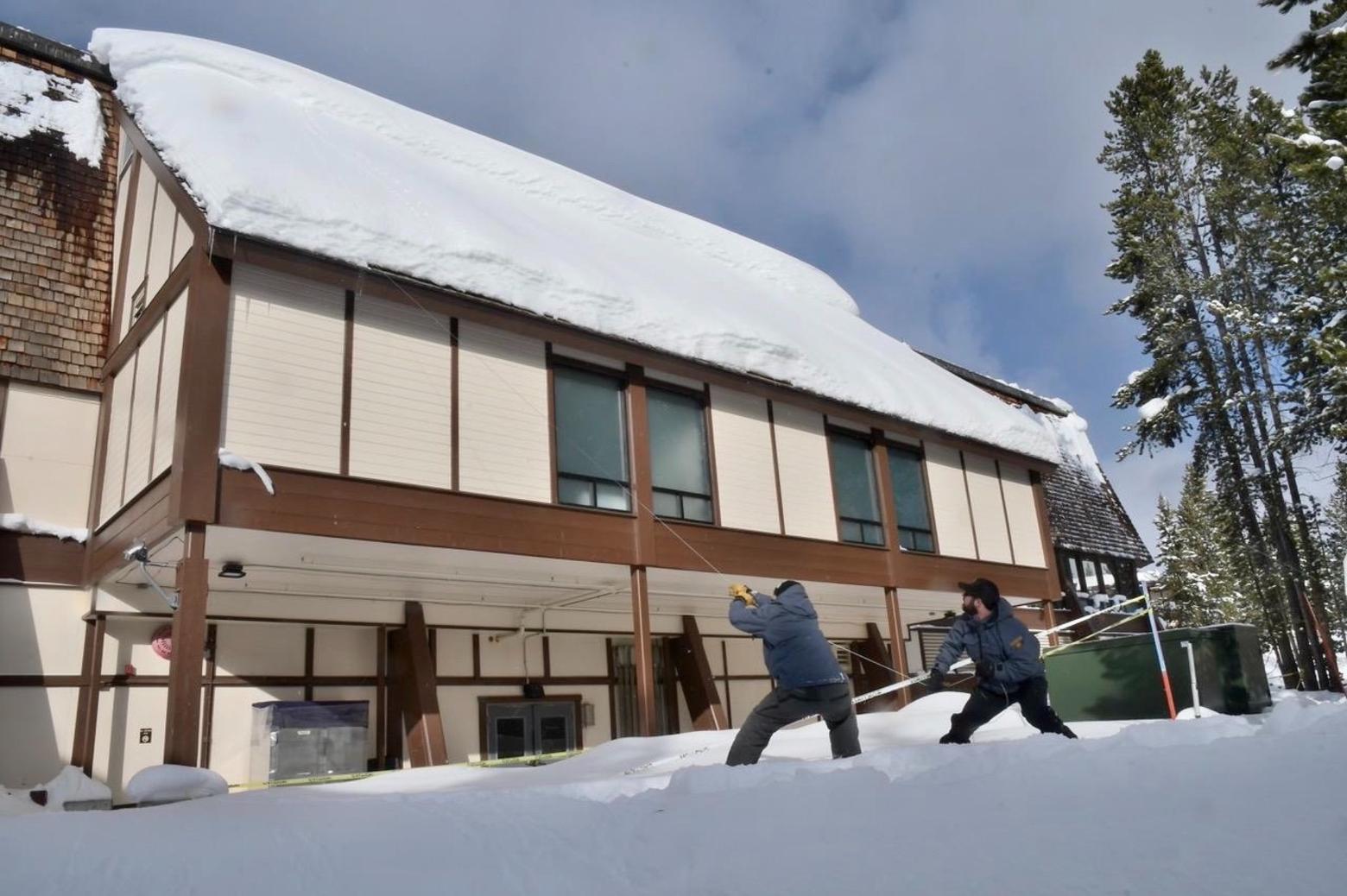 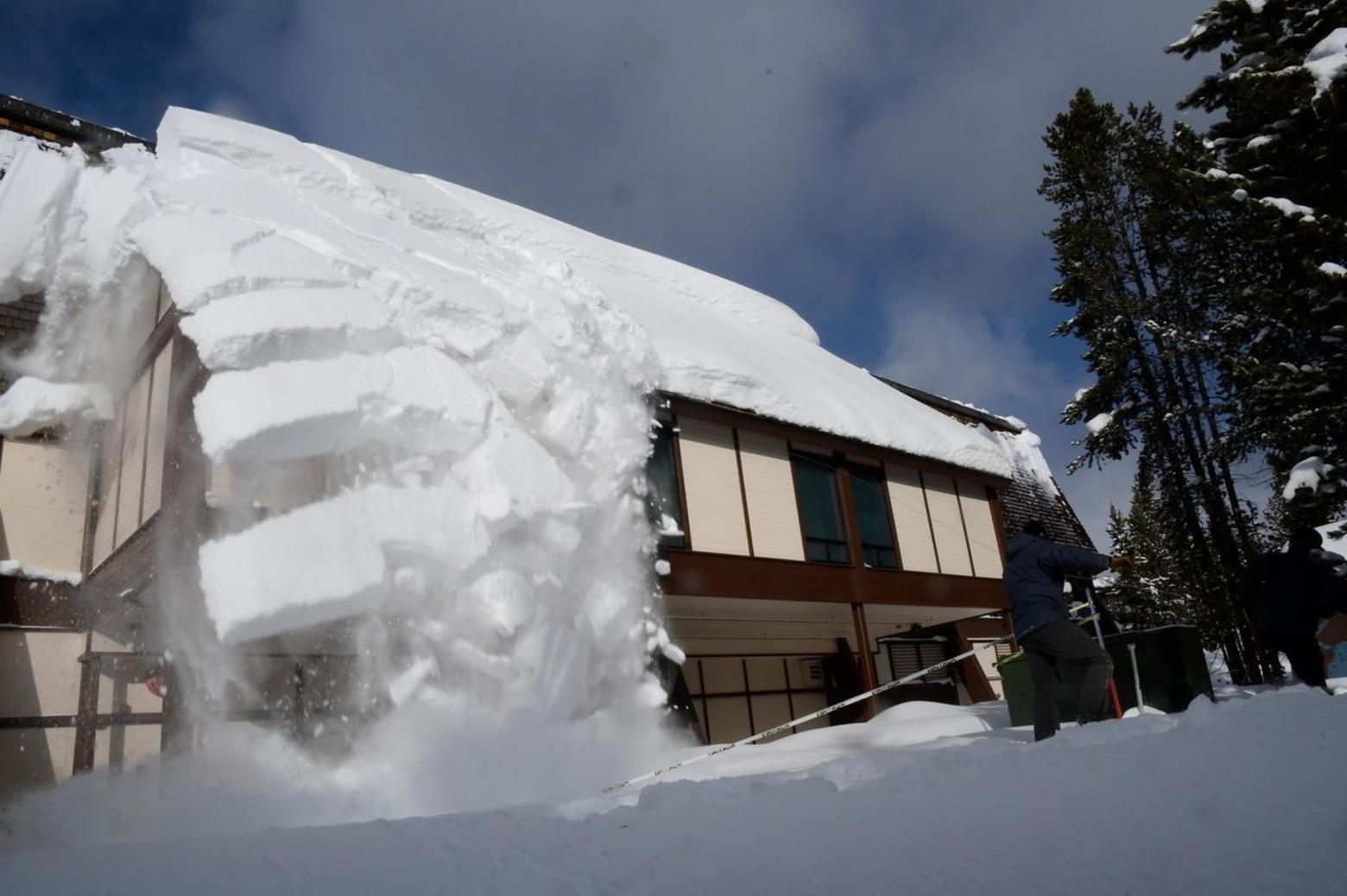 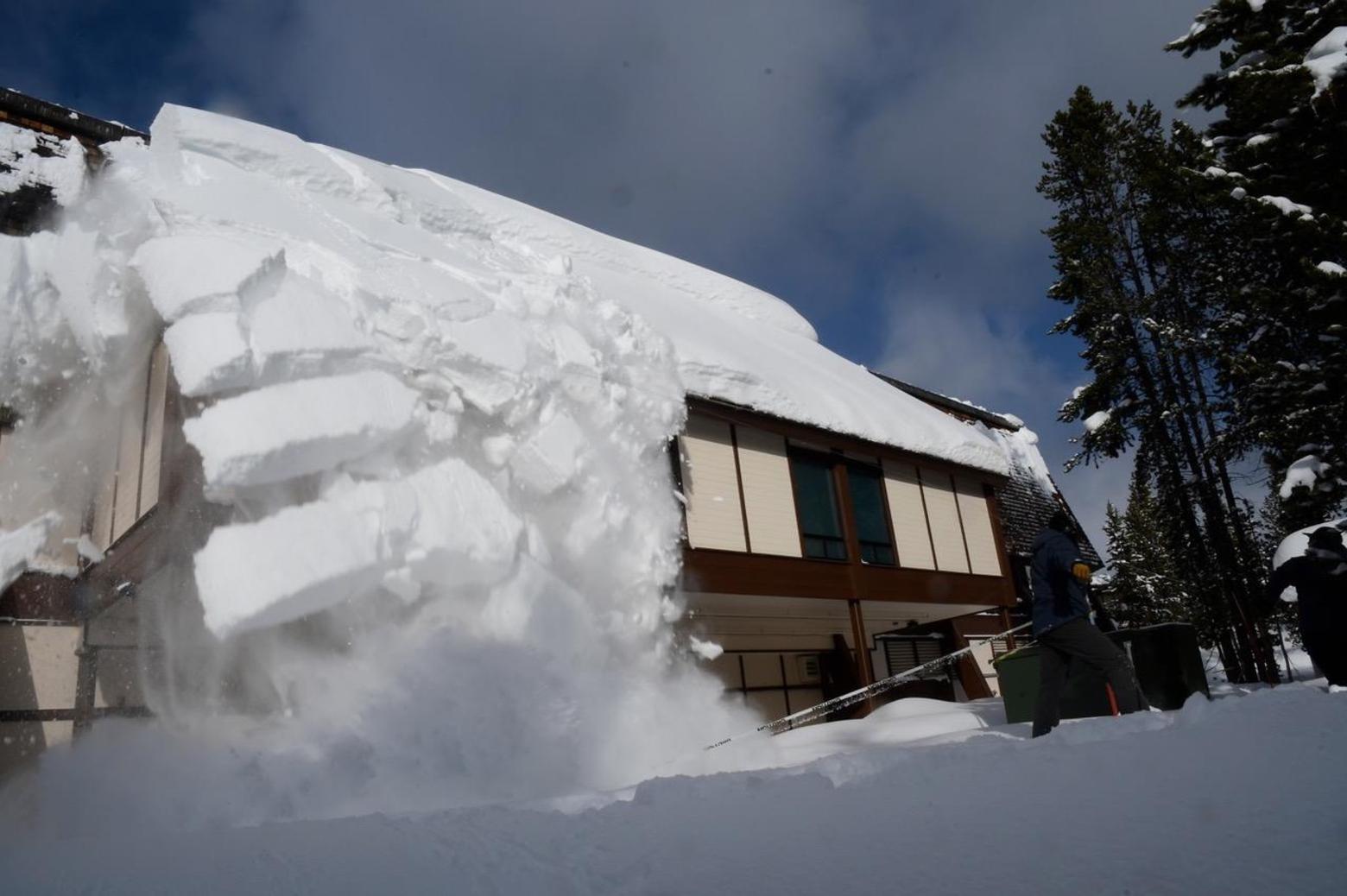 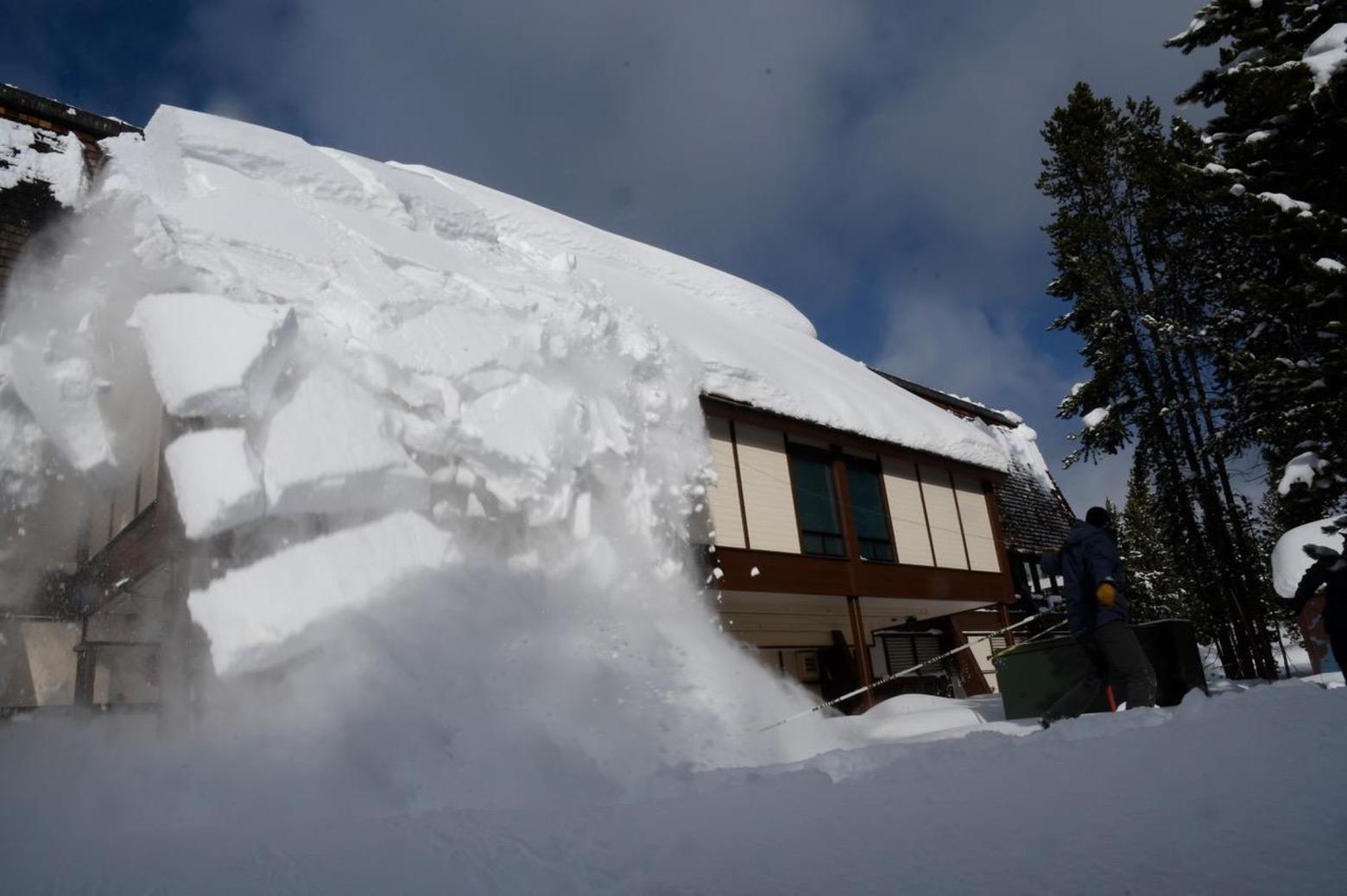 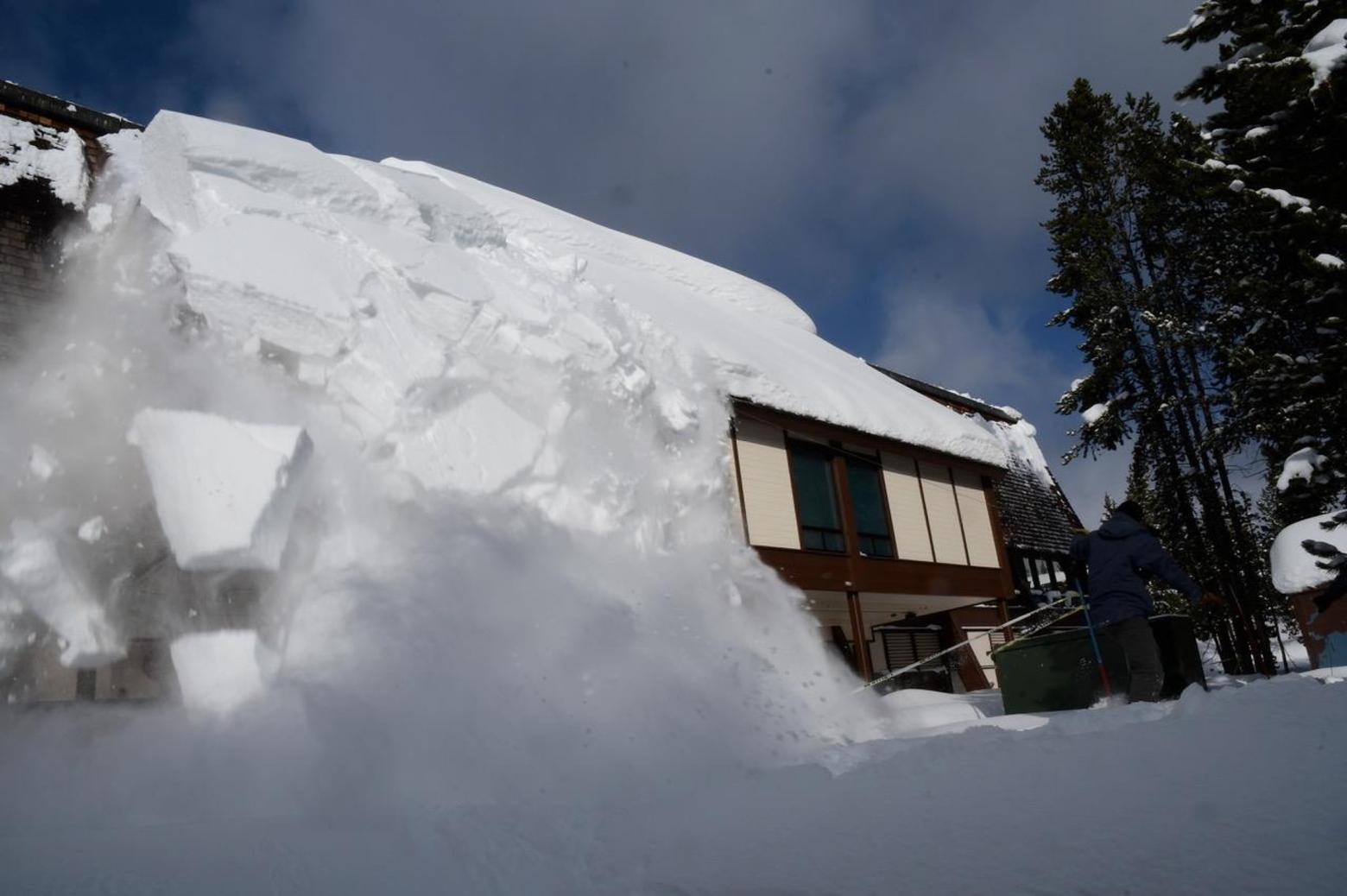 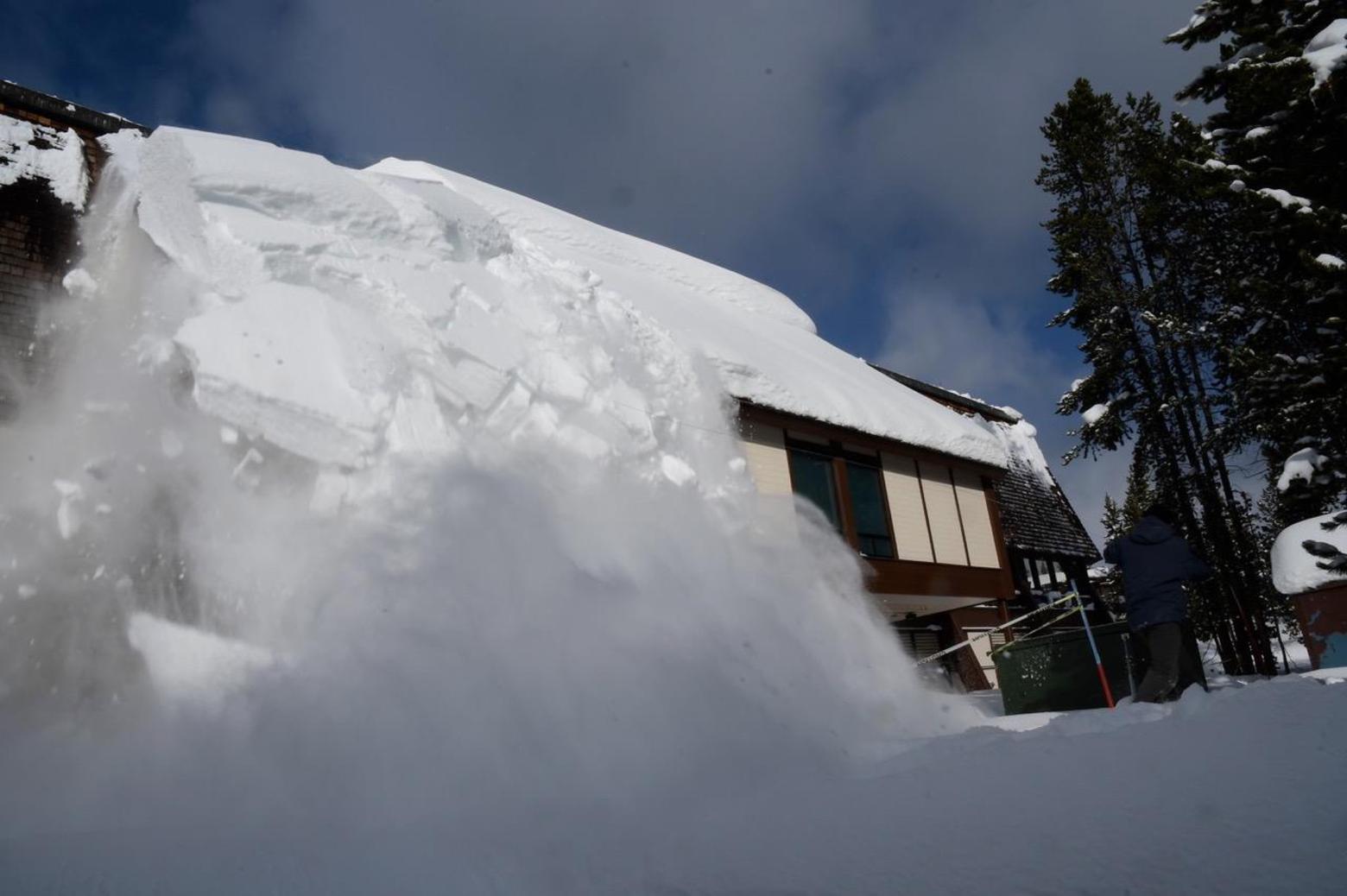 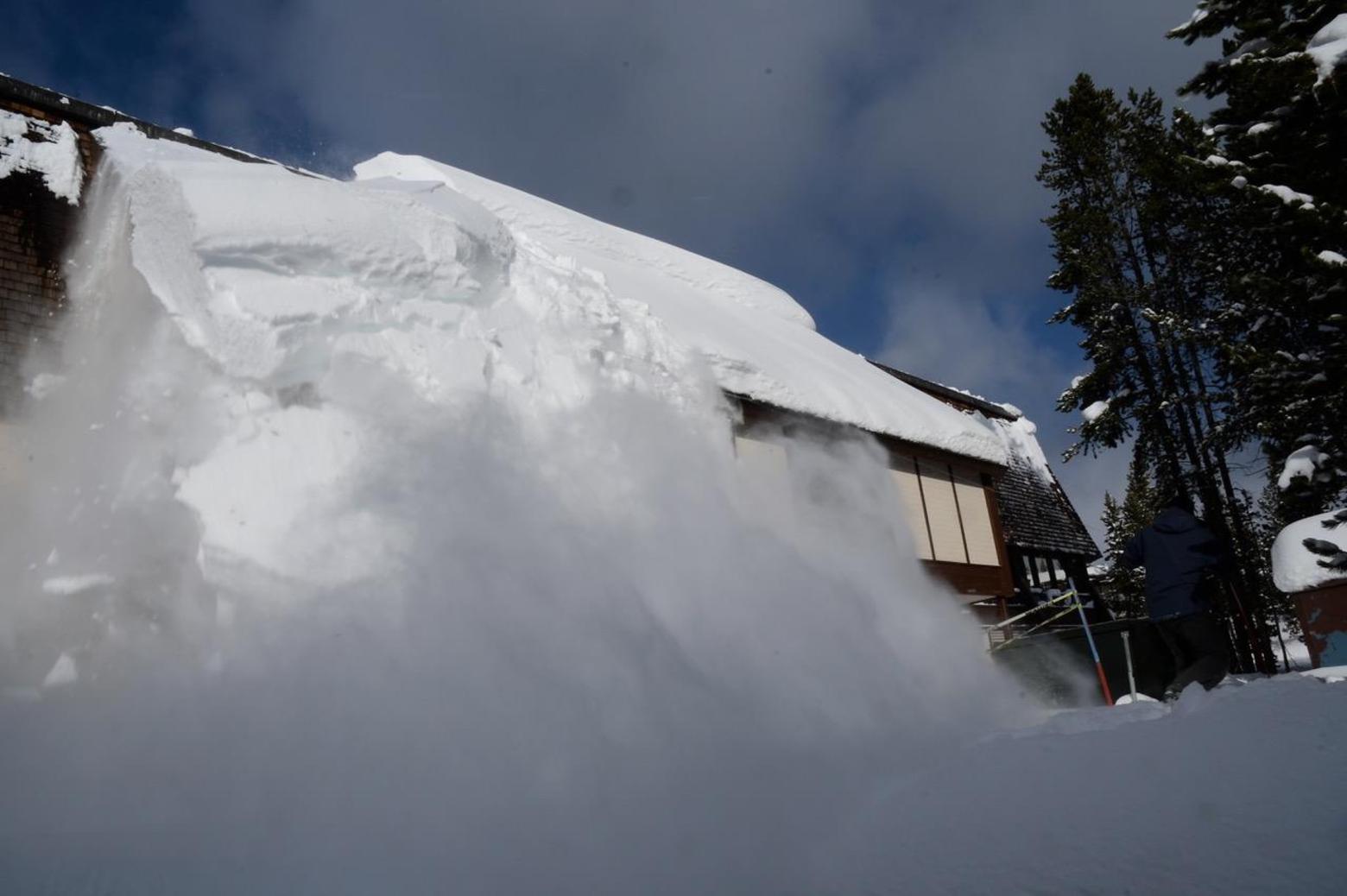 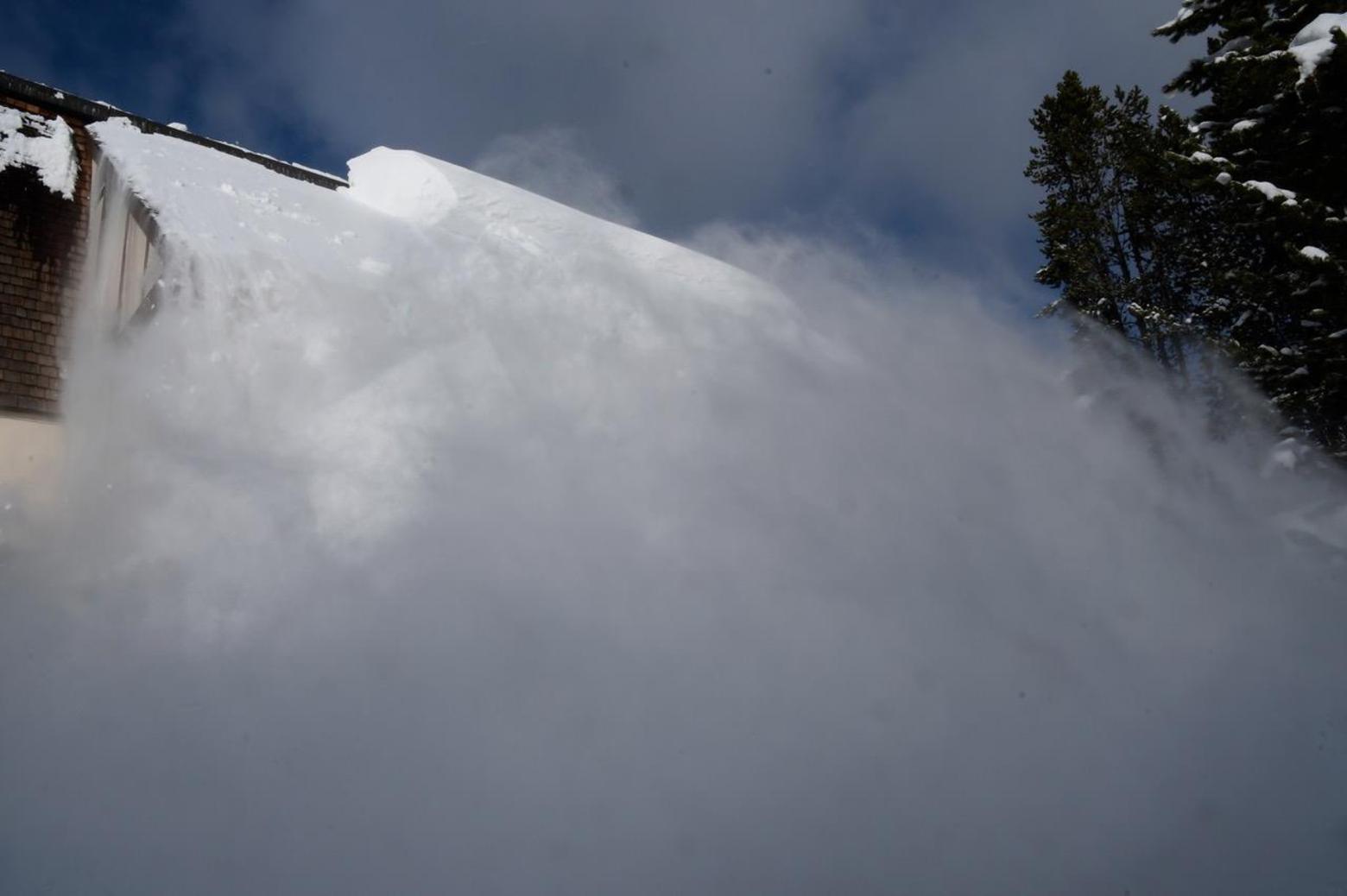 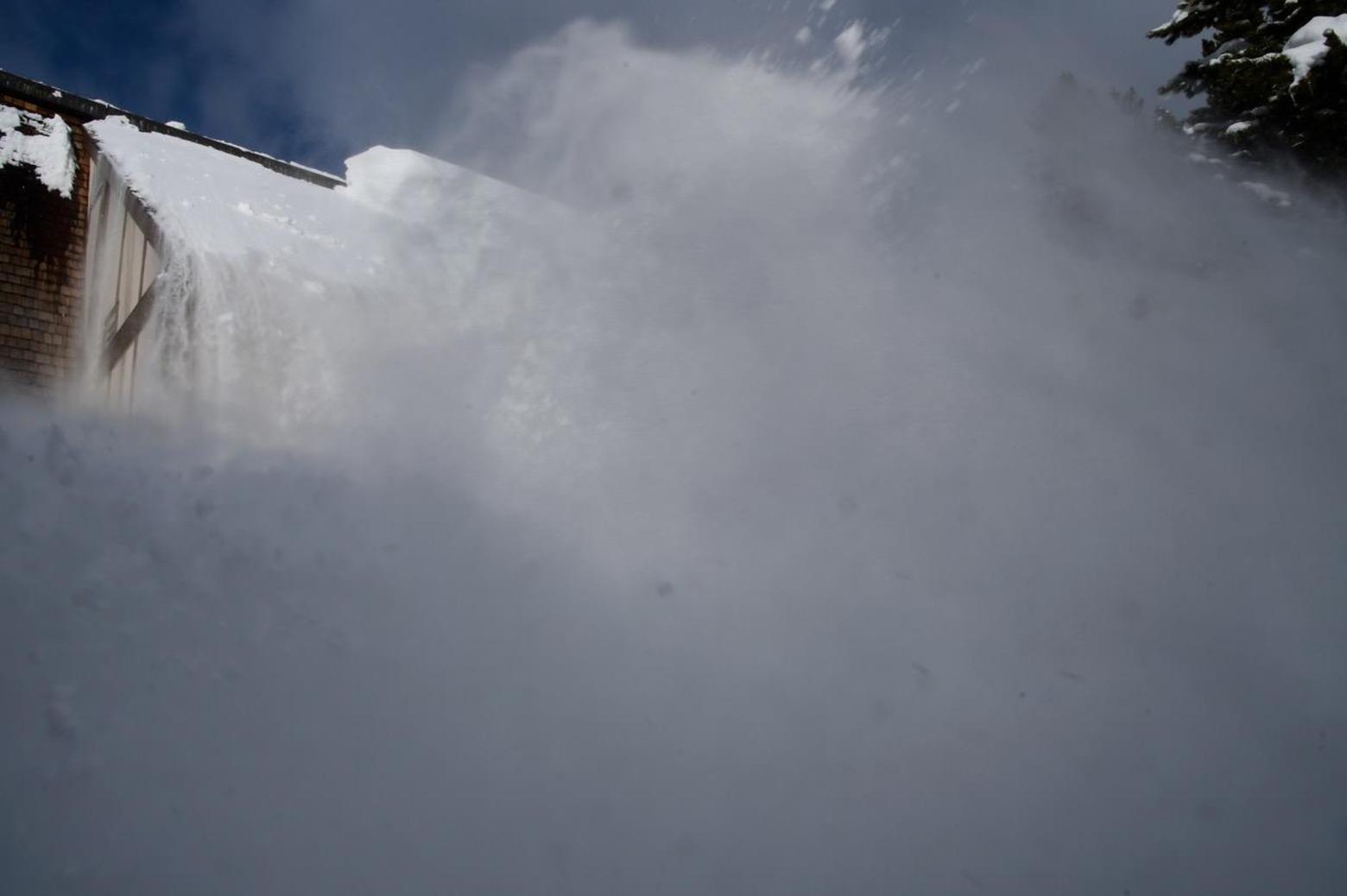 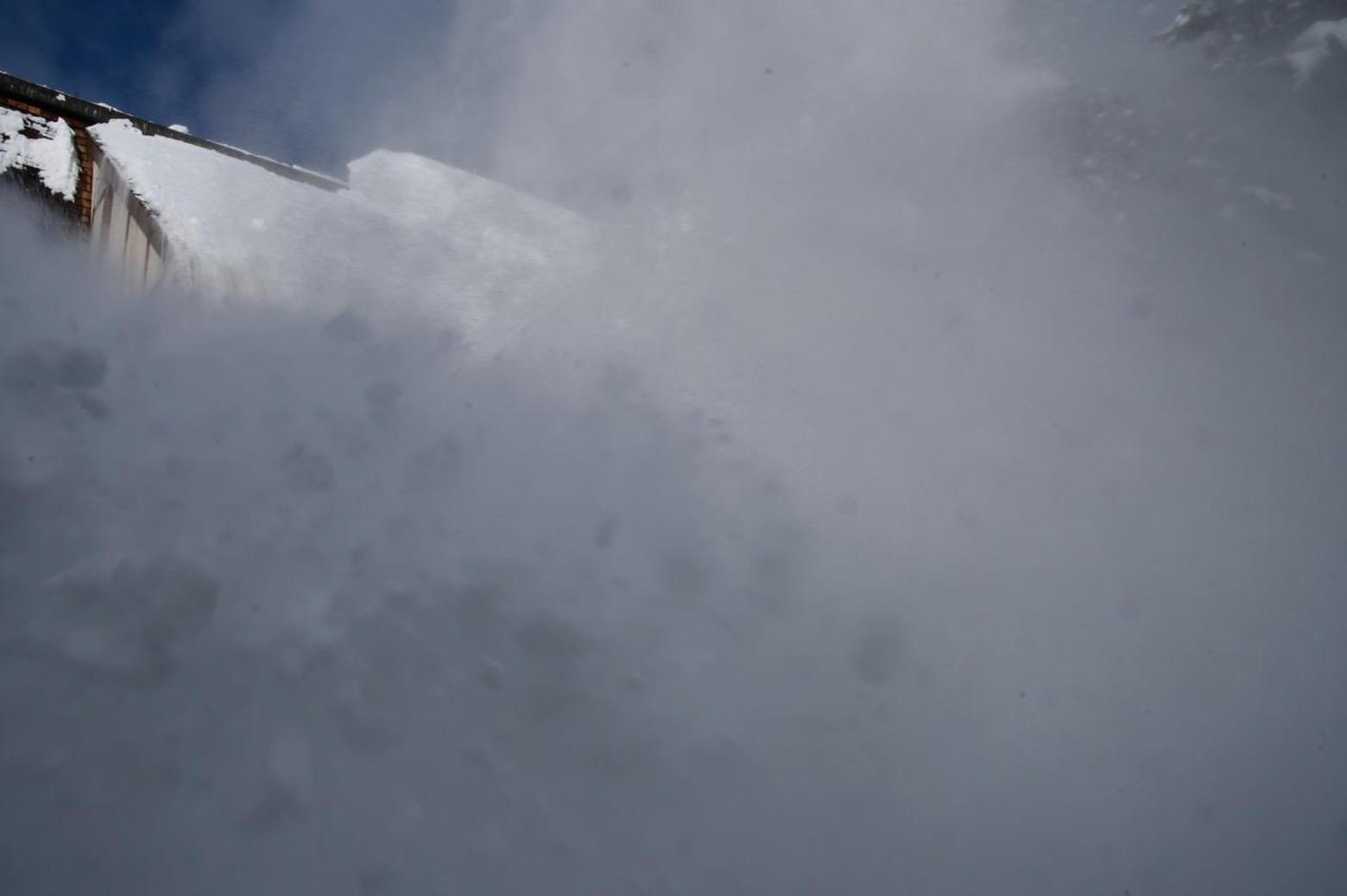 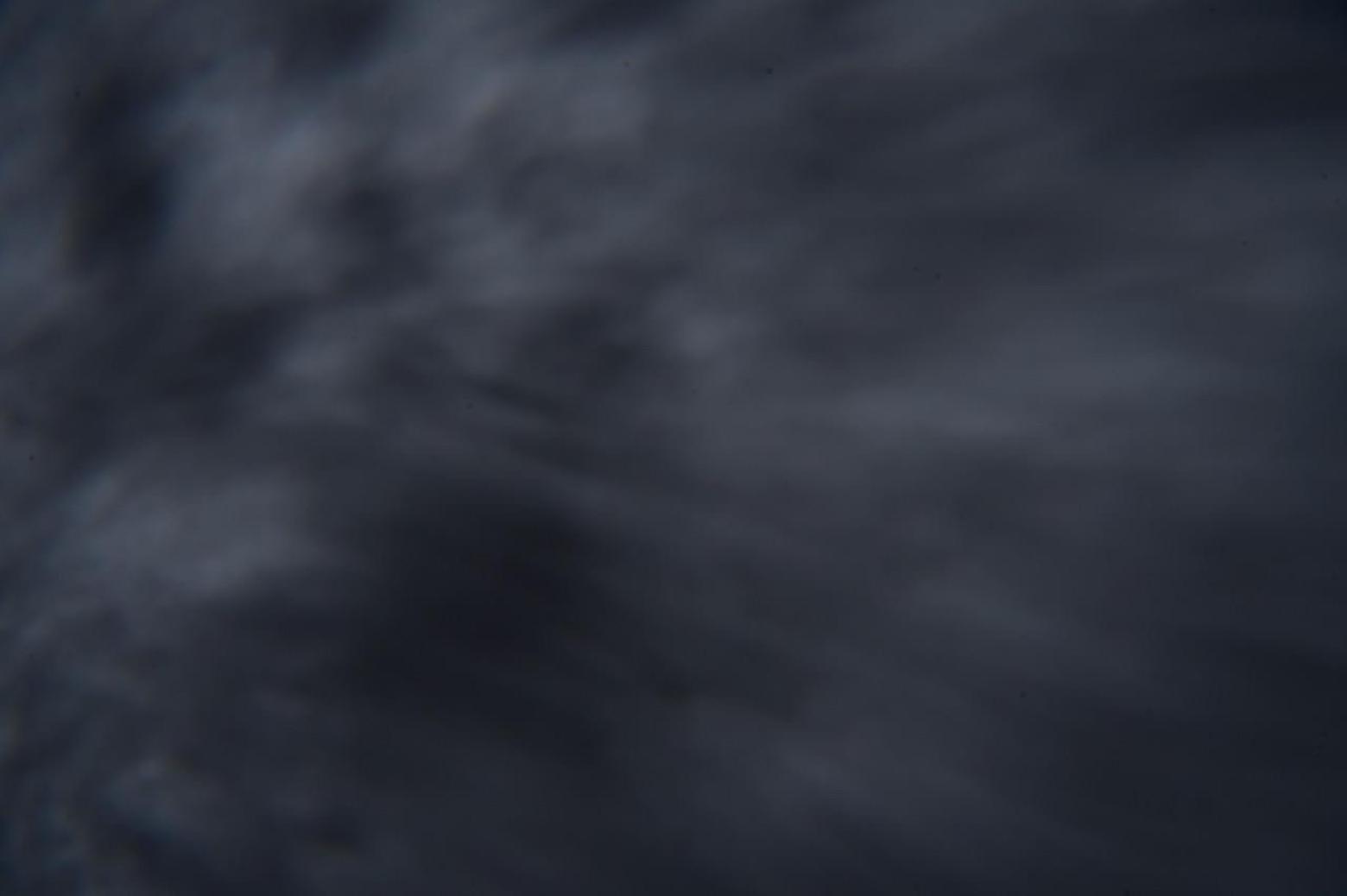