The Language Of Snow As A Vocabulary Of Place 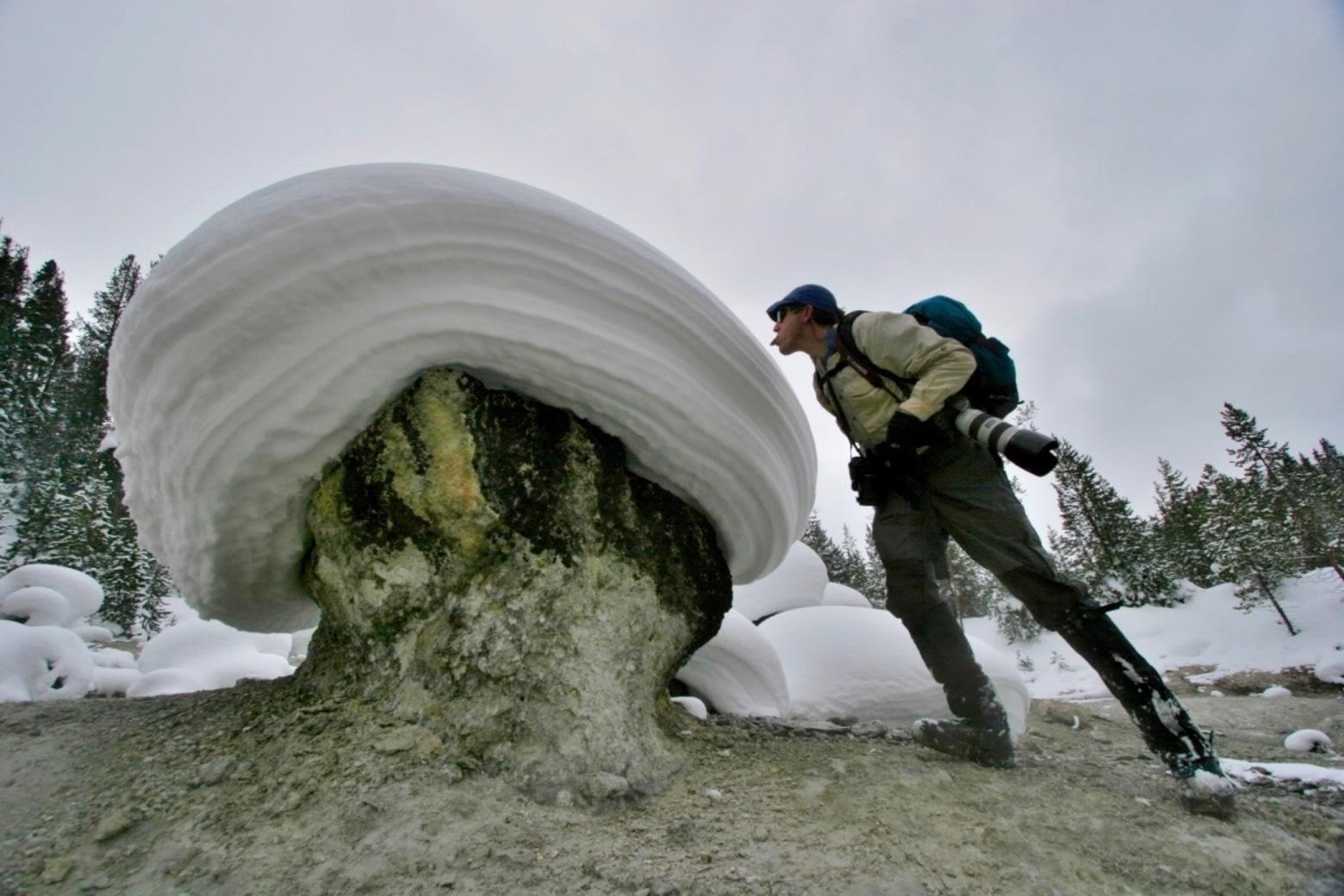 "Tasting a snow cream puff," Steven Fuller writes, "and up here on the Yellowstone Plateau the snow tastes good.."
For half of each year Yellowstone is snow country where an ethereal world of countless crystalline mirrors and prisms envelope the terrestrial world and the landscape is transformed into a snowscape.
As a winterkeeper, by trade, I am a carver of snow.
Working with an eight foot saw I quarry big blocks of snow from out a voluptuous dune of snow atop a roof, transforming nature’s sensuous forms into engineered geometries. Then with D-handle steel coal shovel I skid the blocks down off the roof onto a pile of rubble and debris, which in springtime will evaporate, unmaking my mischief. 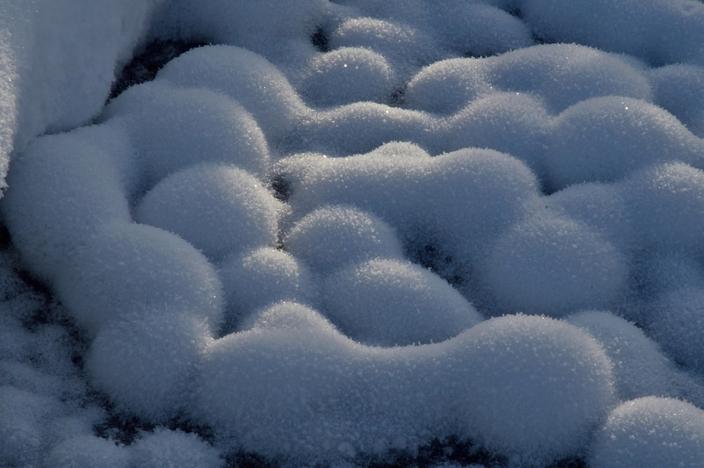 Snow, pure and pristine, refreshes; falling soundlessly it cleanses the air of dust and soot, and it softens and smooths the world.  For awhile it conceals some of our sins and unplowed it heals the highwayman’s scars. In the gloaming the sky is snowing while I hear a chorus of wolves far away.


Snow can fall in central Yellowstone any day of the year but it falls with increasing frequency in September, coming and going until it becomes permanent in November then omnipotent through the long winter until the spring equinox when it recedes in gradual decline to disappearance.


I feel an exuberance as winter sets in—the sparkle of a full moon lit snowfield, the tracery of blown snow on the windward side of a stand of lodgepole pines. There is pleasure even in the face of a blizzard, hunkered down, sheltering within the lee of a tree well to chew some biltong. Then, of course, there is the comfort of a cup of tea within sight of the fire where a cat naps, while outside the stars flare in a deep-cold mid-winter sky. 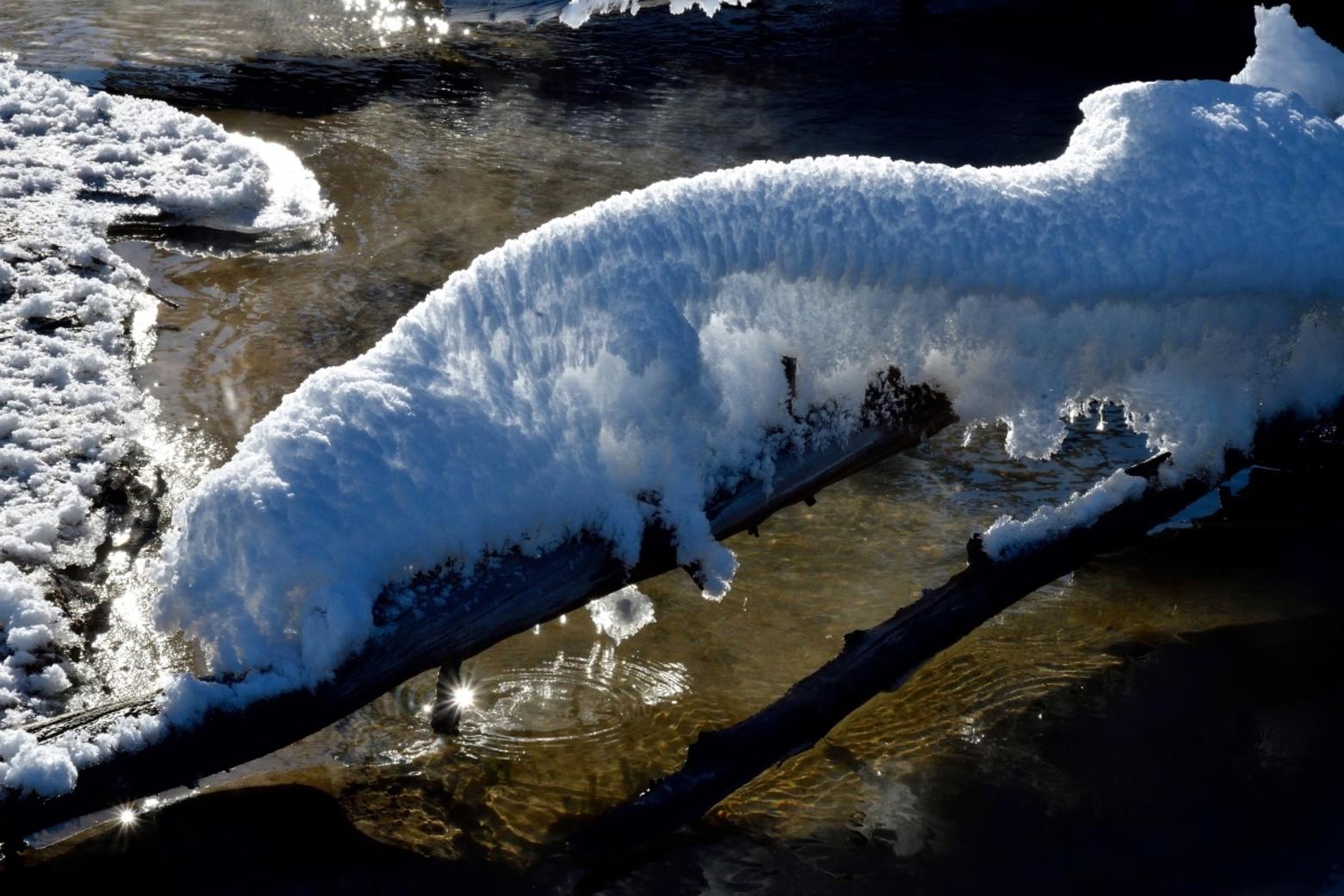 Surface hoar on snow at the edge of a thermal pool—yet another solid-water manifestation of Yellowstone in winter. Photo by Steven Fuller
Snow faithfully documents the comings and goings in the neighborhood, which is a very busy one indeed where the tracks of coyotes, buffalo, snowshoe hares, squirrels, foxes, mice, birds, weasels and martens mingle in a muddle until they are erased by the next snow and the accountancy commences once again. There is satisfaction in reading the spoor, of translating its’ hieroglyphics so as to unravel the behaviors and stories recorded in the tracks and scats.


The convention that Eskimos have a hundred words for snow has been repudiated in recent years though a Canadian site documents 30 Inuktitut words for snow and ice.
The internationally agreed scientific lexicon of the cryosphere distinguishes 29 kinds of snow, 8 falling and 21 fallen. Then, there is the vernacular, the lingo, of skiers and snowboarders.  Both scientific jargon and ski speak are dialects of specialized sub-cultures, not the complex languages of peoples who live out their lives in snow worlds.

The internationally agreed scientific lexicon of the cryosphere distinguishes 29 kinds of snow, 8 falling and 21 fallen. Then, there is the vernacular, the lingo, of skiers and snowboarders.  Both scientific jargon and ski speak are dialects of specialized sub-cultures, not the complex languages of peoples who live out their lives in snow worlds.

Beautiful snow words from around the world: sastrugi, the wind drifted/eroded surface texture of snow.  Sun cups. Sun made snow slab and its cousin wind-slab. Snow rollers, sometimes as big as a tire where snow has rolled down a slope forming a tight coil. Snow snakes, those “pendulous droops” of snow formed when solid snow behaves like a viscous liquid. Graupel, wind driven pellet snow that stings the face and signals the presence of beautiful snow squall clouds. 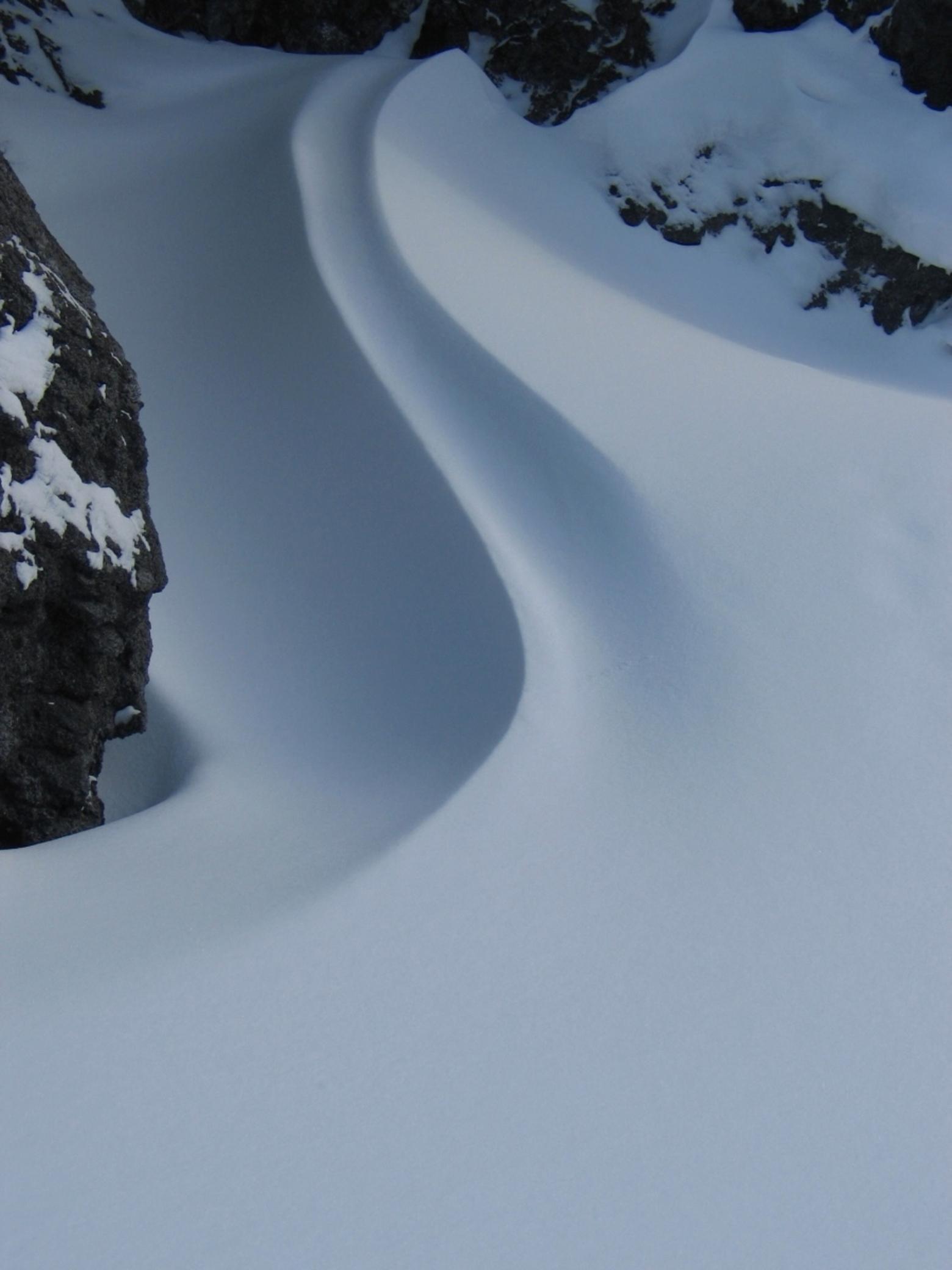 Fuller calls this "a wind-drawn French curve."
A few snow words of my own:


Wet and dry snow, when the sun turns some of the surface of the snowpack to liquid water molecules that cause the underlying dry powder snow to stick in clumps to the bottom of my skis.


Sandpaper snow: when the air temp is very cold so the snow has no glide, and it is like skiing on sand.


Mash-potato snow: wet snowman making snow, press a dime into the snow and you can read the date in the cavity left when you remove the coin.


Styrofoam snow: common in late winter when the days are warm and the nights cold.  You can walk on it in the morning but fall through it with every step in the afternoon.
Greenhouse snow, delicate windows of ice that form under the strengthening late winter sun above the snow so you can peer through them down into the voids around sage bushes.


On windy days, when the trees begin to creak and groan, one must be cautious skiing through the forest.  Heavy pillows of snow, some a hundred pounds plus each, have accumulated on pine tree branches and boughs overhead.  When they fall from their perches they create formidable impact craters on the snow pack below. Best not to be hit by one.
And there is the “whump”, that hollow sound as one skis across the snow pack that signals the collapse of a weak layer and the potential for an avalanche.  It is a warning sound, like the woof of a bear, not to be ignored. 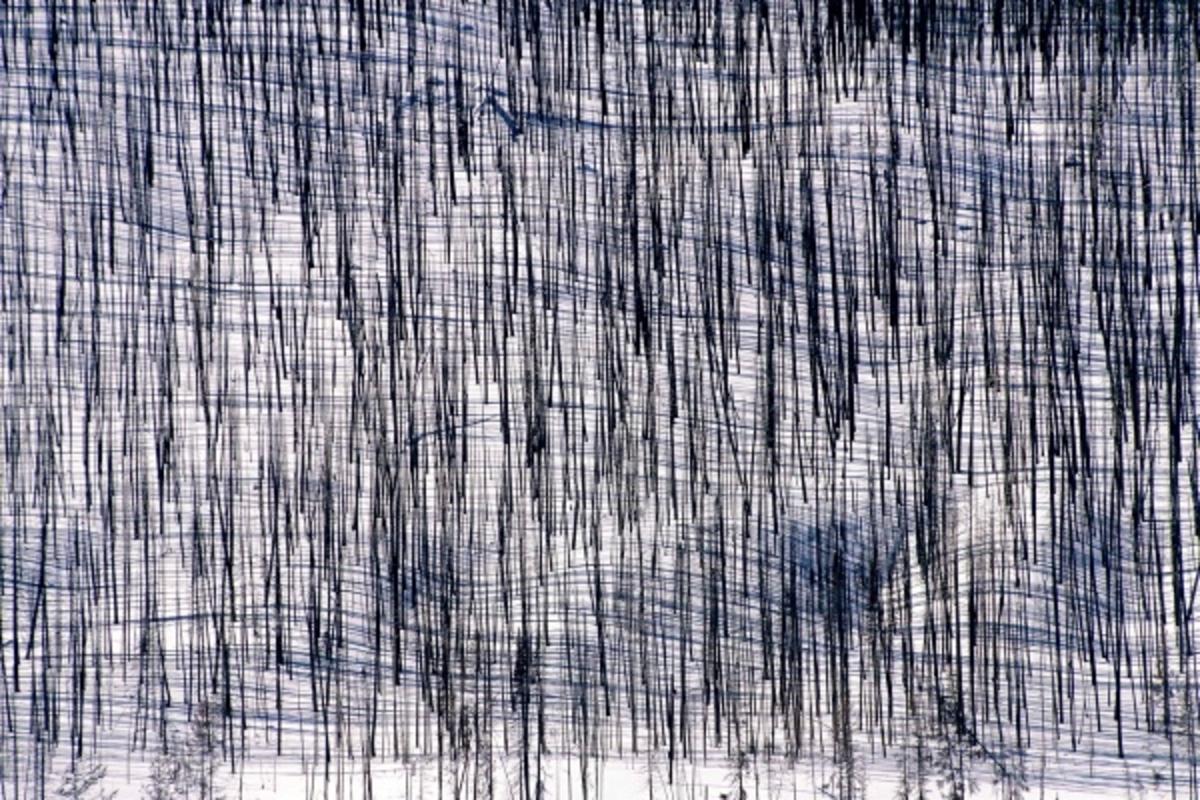 Says Fuller of this firescape: "The vertical lines are snags, the burned standing lodgepole pine trees of a forest swept by a very hot fire. The horizontal lines are shadows caste by the snags that reveal the snowy contours of the hills on which the charred forest grew." This photograph won an award at an international photography competition in London and won praise from the legendary artist Ralph Steadman, who served as one of the judges. Photo by Steven Fuller.
On cloudy days when the light is flat and there are no shadows nor highlights, when the eye can’t distinguish between a hole and a hill and it is easy to ski off the crest of an unseen snow cornice.


But, in the course of my tenure here, there has been a steady shrinkage of the boundaries of the nivean frontier. Snowmobiles access the previously inaccessible. Snow plows, welcome in mid-April when first we came here, are interruptus of the bliss when they arrive now-a-days the first week in March. In Yellowstone our defined winter has become a much abridged version of nature’s winter.
With human-caused climate change, the effects of which I've witnessed, we are losing more than the snow which makes winter winter. We are losing an amazing medium that makes Yellowstone Yellowstone for half of the year. 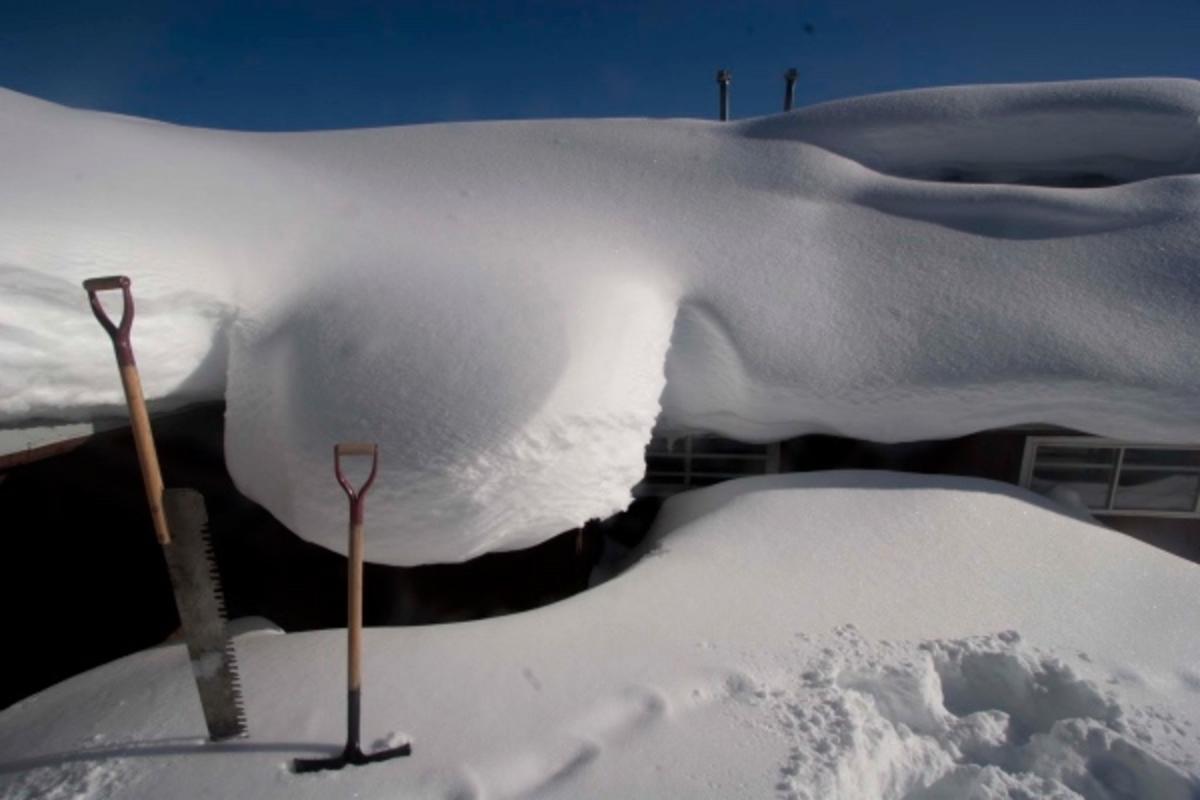 How deep does the snow get? "My pantry lies under a snow pillow at the back of the house." 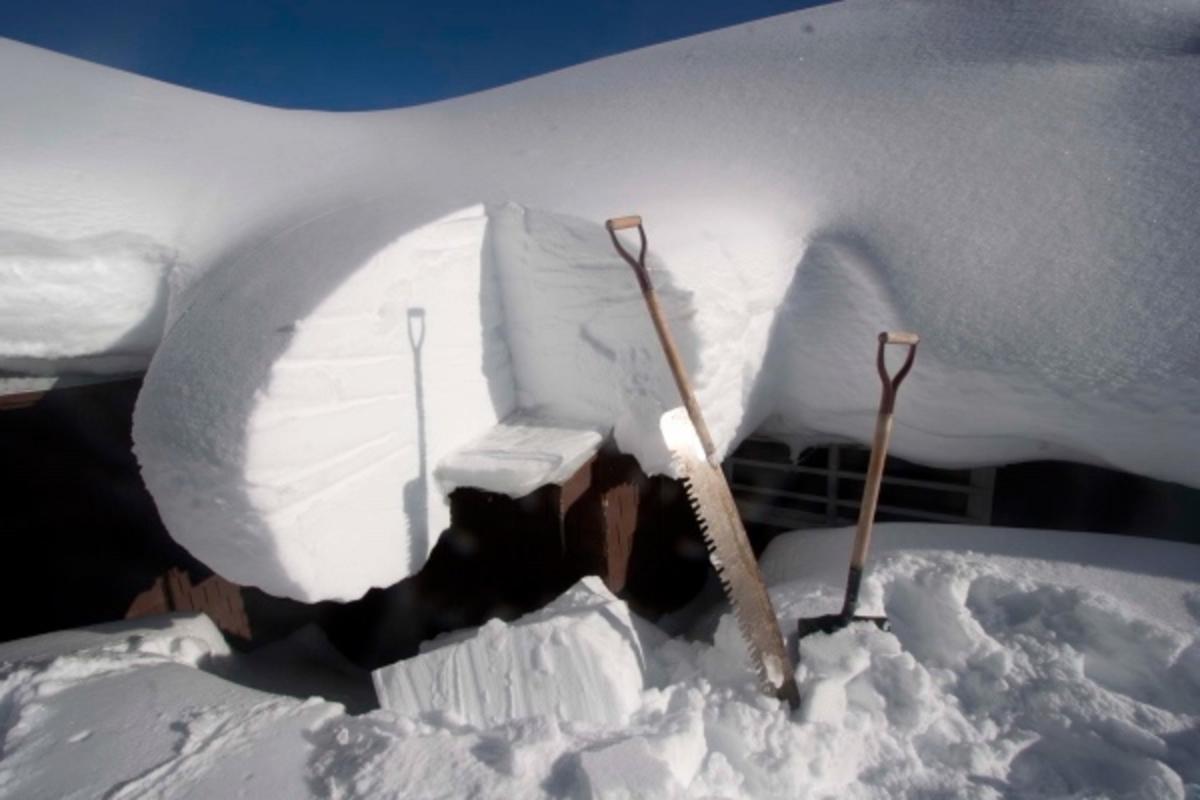 Digging out to let the sun in. Like Michelangelo plying a piece of carrara marble, Fuller continues the process of cutting away the icy slab almost as dense and heavy as concrete. Photo by Steven Fuller
Click here to read all of Steven Fuller's journal entries for "A Life In Wonderland" and this Mountain Journal profile of Fuller, "Twilight of the Winterkeepers"